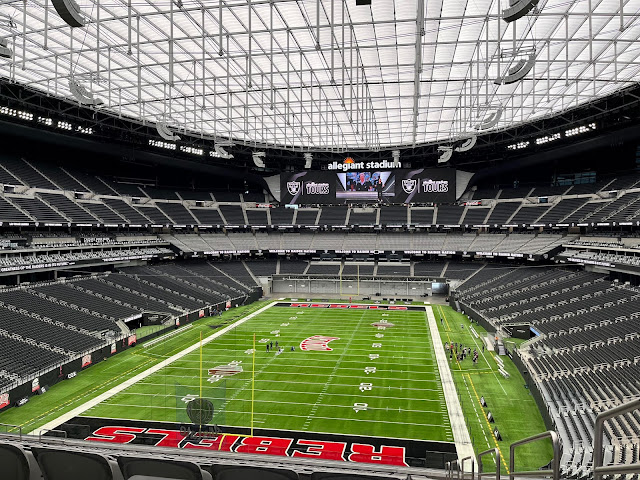 I know what you're thinking. How come there's REBELS on the endzone. That's the name of the College Football team over at UNLV or the University of Las Vegas. But, let's not really dwell into that. We're here to check out the Allegiant stadium. It's the stadium specifically built for the NFL team RAIDERS. Also known as the DEATH STAR, this place is just humongous. 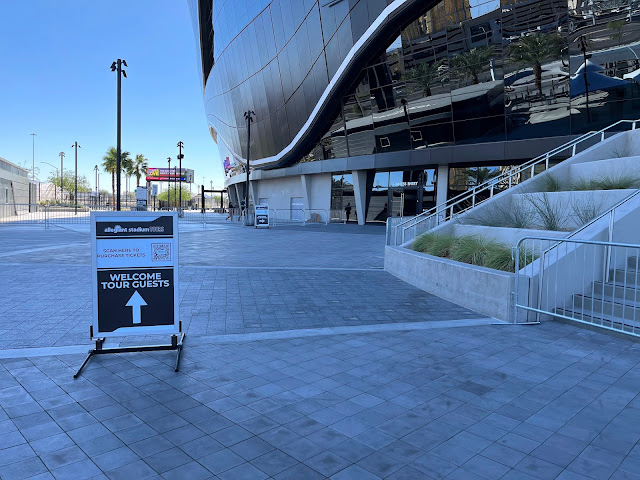 On no event days, ALLEGIANT STADIUM TOURS are scheduled. When you visit, you could park for free. Better to book your slot a week or two out in their website so that you could pick a time. If not, you might be able to get a walk in slot or you could just visit the official team store. (If you do the tour, there's a discount for whatever you buy at the store). 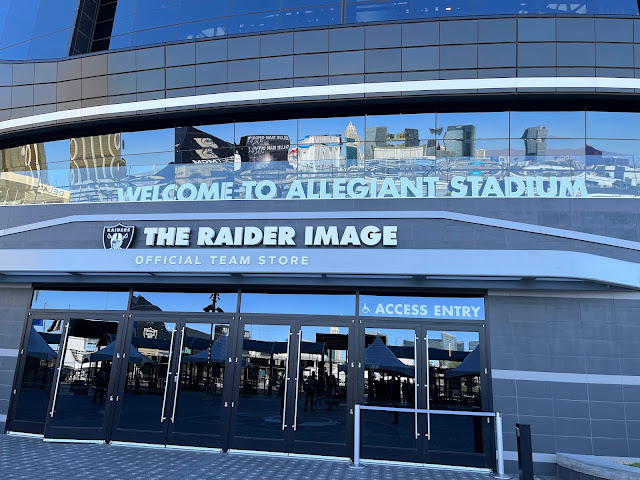 So when you enter the north side of the stadium, the store would greet you. Just follow the sign to the left side and enter up the escalators to the receiving area. There, they will give you lanyards and you could buy a few refreshments and wait for everyone in your group. 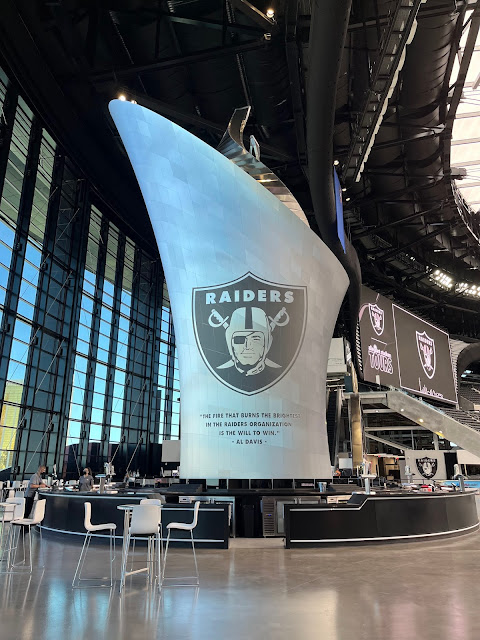 Once everyone is there, you would be accompanied by a couple of staff. Remember, this is a walking tour so wear comfortable shoes as it will roughly take an hour or so to get around. They will then bring you up the escalators to a landing where you will see the torch. The glass panels facing the strip actually opens up. Plus, the standing area's table has wireless charger for your phone as well.

The tour would then lead you to a hallway filled with art works and also towards the coveted suites. Unfortunately or fortunately, this is were all the good stuff starts. It's here that you get access to places that are off limits during events and game days. 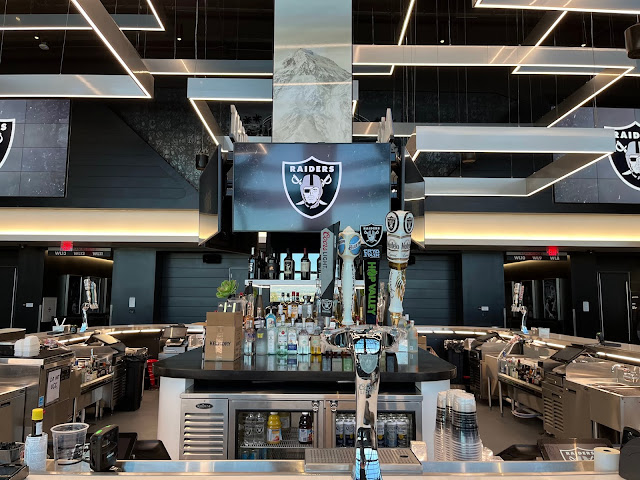 On the way, you could see famous paintings that were collected just for this stadium. Aside from that, there are areas to buy some refreshments and even the press center. 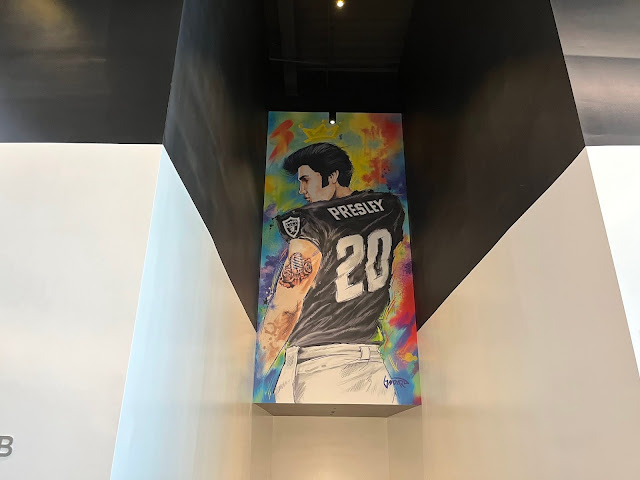 Speaking of suites, we were almost this close to the 50 yard line but was unable to enter because they were renovating it. Instead, we had a peak into one of MGM's suites on the 45th line. Bummer. 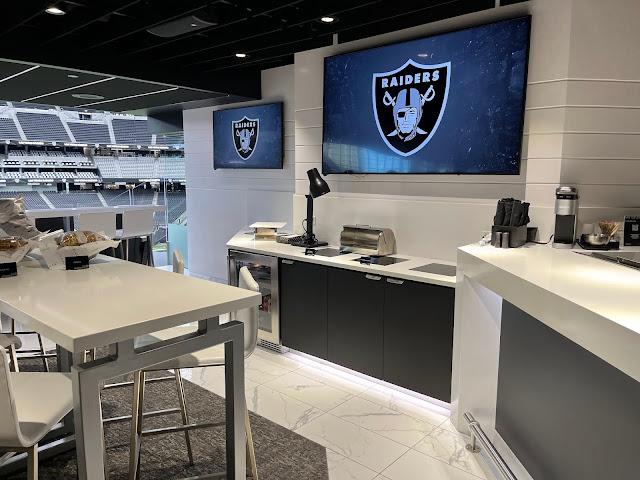 Once you enter, you have access to private washrooms, a bar, tables and chairs plus flat screen tvs and other things to pamper you. 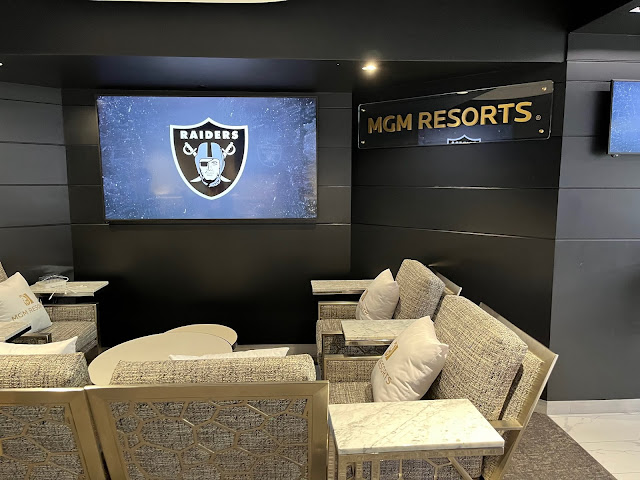 If you really want to see the action, there are stadium seats that are accessible in those suites. The only thing that's quite unique though for the owner's box would be these white chairs. Theirs are the only ones that have a different color from other suites. 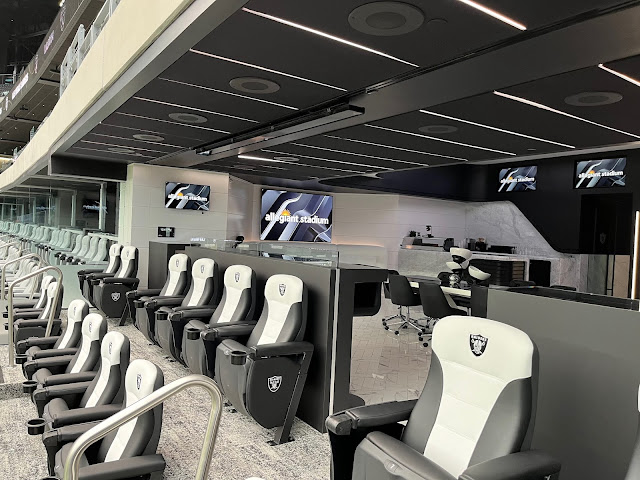 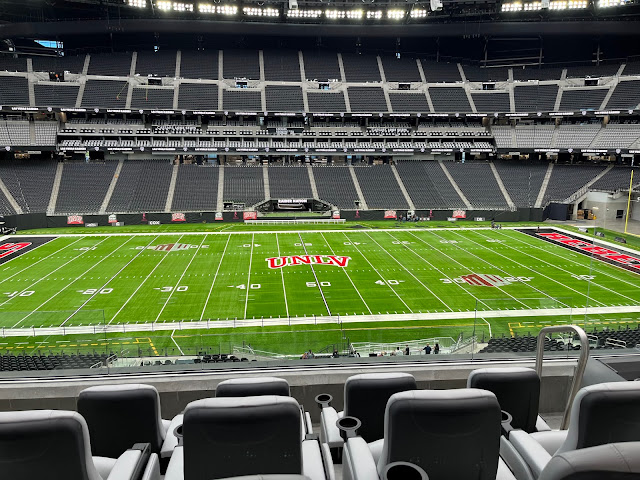 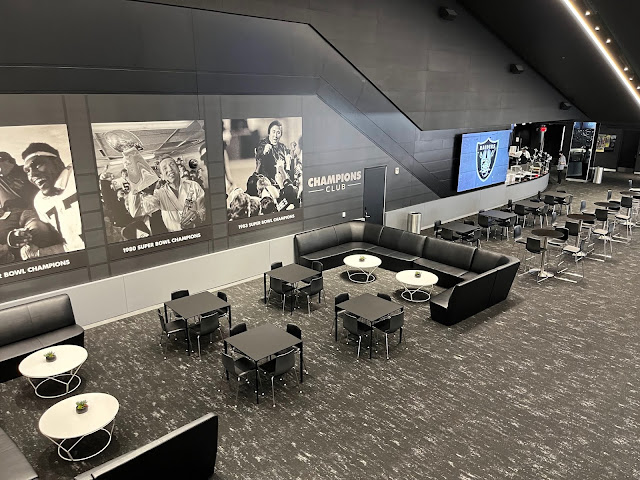 Afterwards, you get to see the Champions club were the VIPS could mingle. We just passed through the twitch room, and was led to the Raiderettes locker. 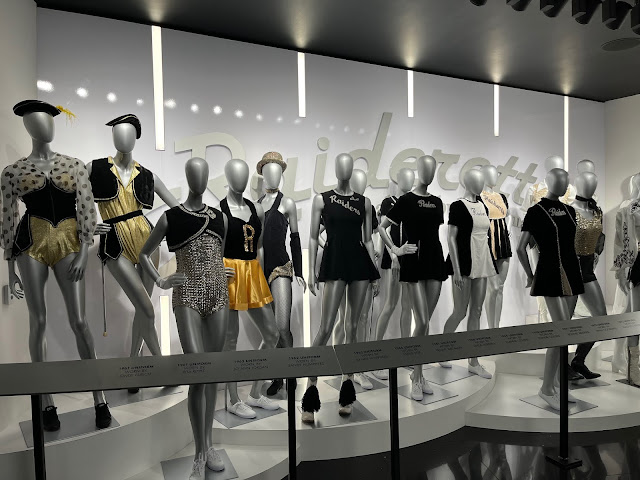 The press room was up next but we were shown the trophies that were won by the raiders. Here, we watched a film for a good 5-10 minutes. We were able to relax our feet as well. 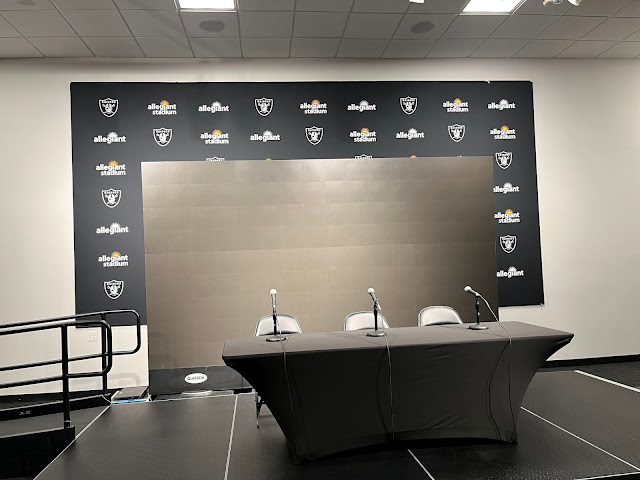 Just through a couple of doors, we were led to the locker room. The locker room was really spacious and modern. Each player has a digital lock box for their belongings as well as other stuff. 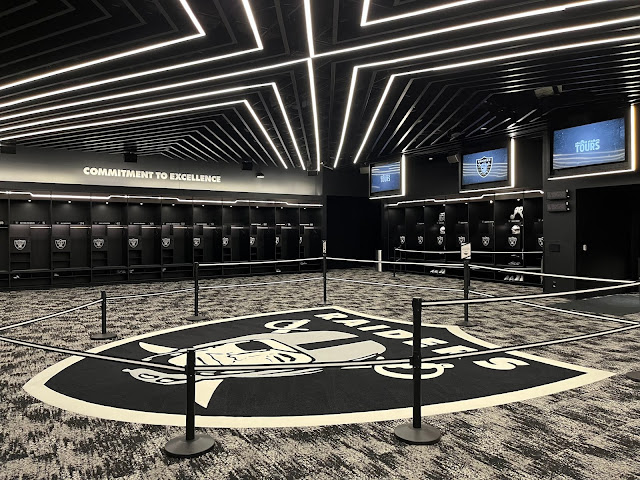 Here's me with a closer look at one of the lockers. Derek Carr is the current quarterback for the Raiders. 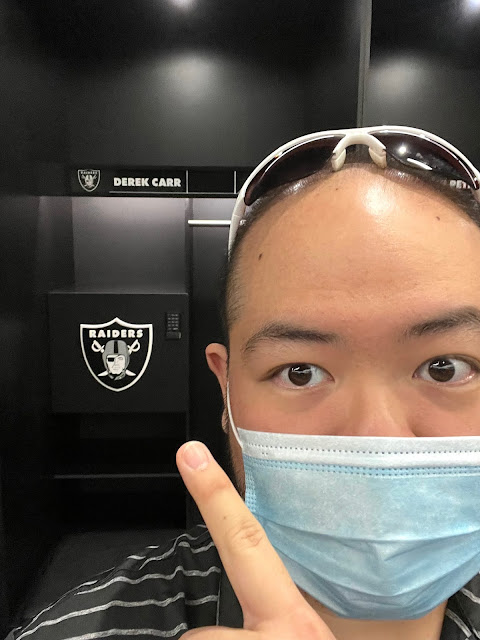 Aside from the locker room, we passed through the medical area of the team. They have an xray and even a cold and hot jacuzzi. 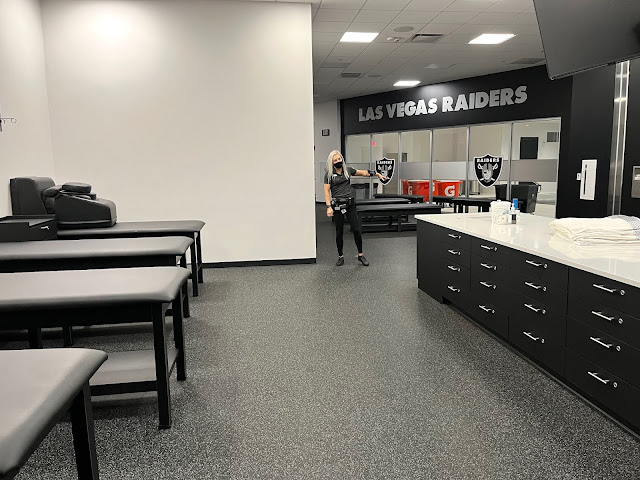 Would you believe that some of these tubs have moving "treadmill" for the players to walk on? 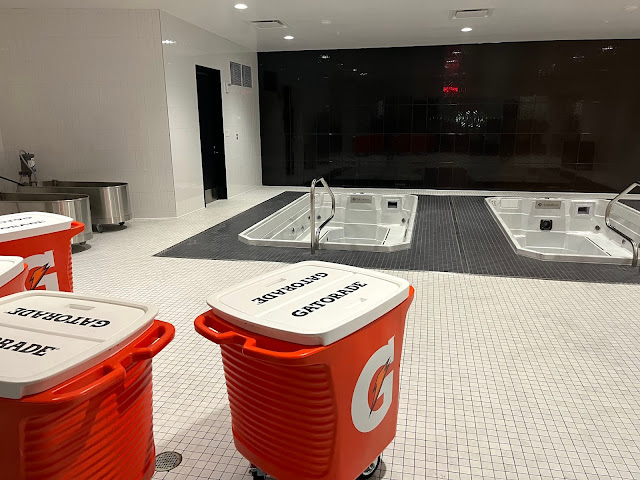 The field itself is quite unique. Since the Raiders play their games on natural grass, they had to "train" the grass in. What you see here would be the cement flooring with astro turf for the Rebel's game. The Raider's has an automated "train like" system that's 4ft high that would allow their grass field to be brought in from the outside. Talk about expensive. 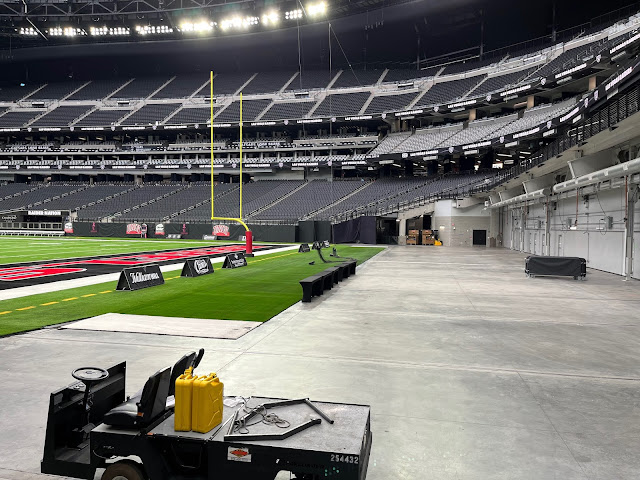 Just behind those white doors would be the grass area were they let them absorb the sun. There, they are taken cared of. 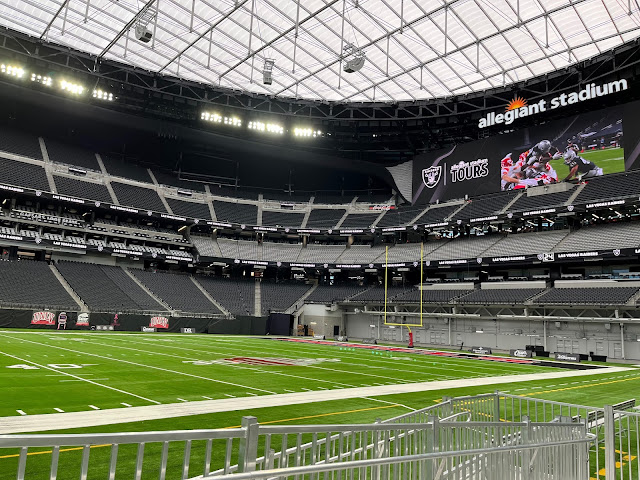 From the bottom, you could definitely see the top. This is the view from the field. 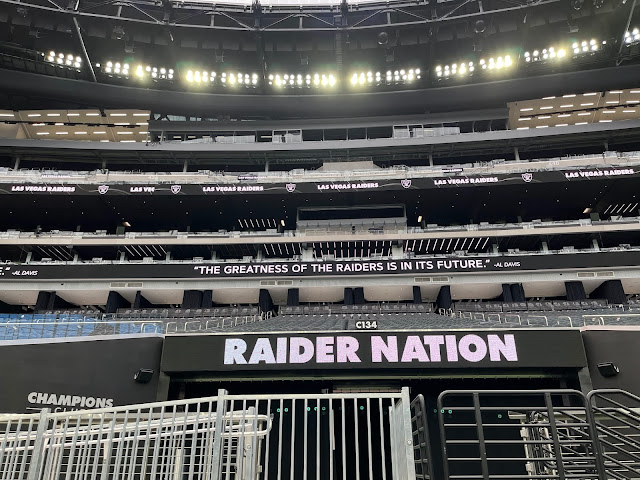 It's just amazing how money could be spent on such a thing. 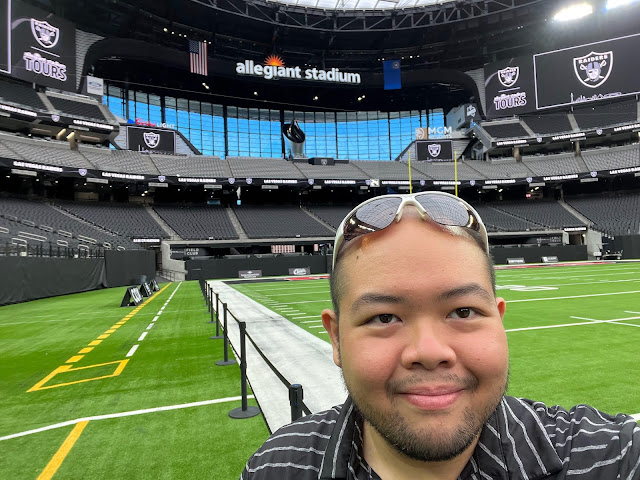 And another look on the other side. 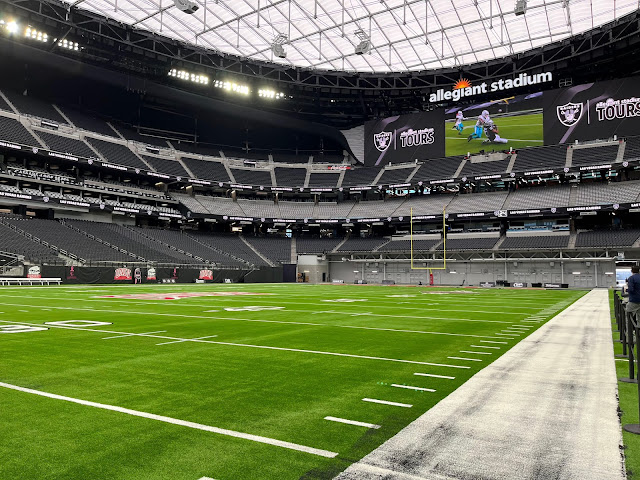 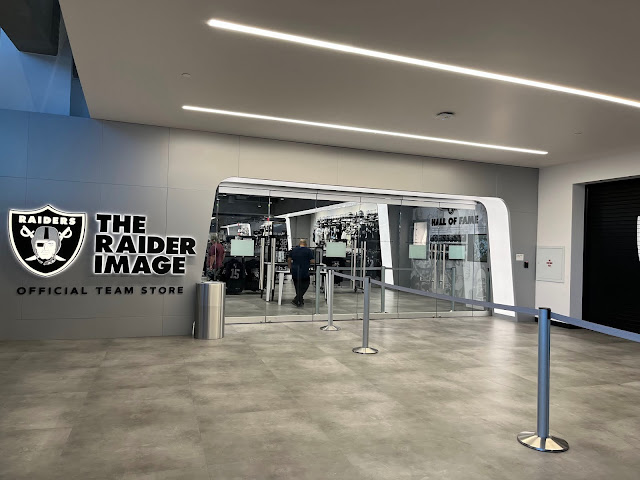 After the tour, you're given a discount at the store. Also, if you chose to get the tour with the drink add on, the staff would lead you back to the trophy area to enjoy your beer and buy some snacks.
If you ask me, it was worth it. A little expensive but quite nice if you think about all the access you get.


Disclaimer: wrote this based on my experience. paid for my ticket.
Tagged