Ever noticed why I don't venture that much into cooking places? Like where you grill the food or when you cook it yourself. If you checkout my archive, I never go to a place where you have to cook yourself. Except for one place, Ganso Shabuway (previous post here). 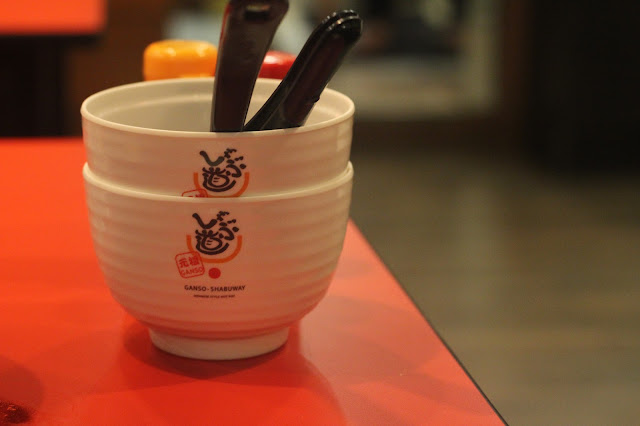 I remembered the last time I was here, I was dragged and pulled and pushed because my dad wanted to eat shabu shabu. I prayed that we go to a place where there would be cooked food already rather than us having to cook it for ourselves. I told myself that I do not want to cook to eat especially when it is in a restaurant.
The shabu gods heard my prayers and read my blog and told Ganso Shabuway about it. As if that wasn't enough, I got luckier. I was invited to a tasting event they were hosting yesterday.


Yeah!
My very first solo blogging event here in Manila. Since it was an event, there were a lot of other bloggers. I was starstruck with all of the awesomeness in attendance. I was surrounded by different foodies that I find really really really cool. From Sir Richard of Tales From the Tummy to Ms. Sumi of The Purple Doll. I got to admit, I was amongst creative food geniuses. Gods in their own fields! They were veterans.

Yes, the shy guy in me conquered my want of having a pic with them. LOL! I couldn't even approach them to say hi and introduce myself. I was actually intimidated because most of those in attendance knew one another! The silly me crushed my fan-boy side and had me seat in one corner. LOL! IKR!(HIYA AKO EH BAKIT BA?!LOL). It was great that I was seated besides Ms. Sarie of Now We Are Hungry that I was able to have someone to have a little chat with before and during everything.

Anyways, as soon as everything was ready, dishes upon dishes were served.

Since I do not really eat tofu and eggplants, I only got a few bites. This would definitely cater to those who are a bit health conscious. The sesame seeds added a little flavor to this dish. I would have suggested to have the tofu in bite sizes though. It would be easier for a clumsy guy (read: ME!) to get a piece. 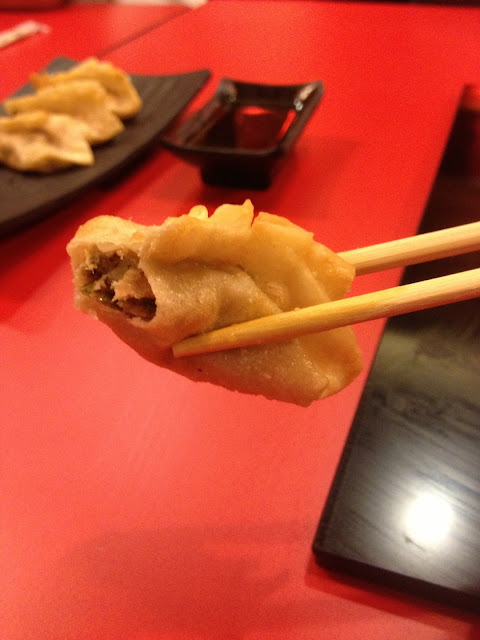 The fried wanton had a mixed of beef and pork feelings. The gyoza was made with USDA stuffings! I guess the only difference between the two would be the texture. The wanton was crispy because it was deep fried. The gyoza, on the other hand, had a soft exterior as it was only pan fried.
This was good! It was definitely one of the best dish I had that night. The meat wasn't dry. It was juicy, moist and soft. The crunchy exterior kept all the liquids inside. The squash was also a hit. It tasted like sweet potato! I liked it! I would kick you if you don't get this!
The tuna belly was served with garlic butter sauce. It actually had a citrusy hint to it. It was perfectly done as the inside was moist and soft. It was like eating chicken. What I loved about this was that there wasn't any bones in it! It all went straight into my tummy!
Their version of an Ebi Fry! During my first time eating here, I was looking for something fried. The first thing that came into my mind was this! This would definitely be adding a different texture while eating all the shabu goodness! Take it from me a definite choosy semi-veggie eater, I like the sesame dressing of the salad  and the freshness of the greens that I was able to eat it. 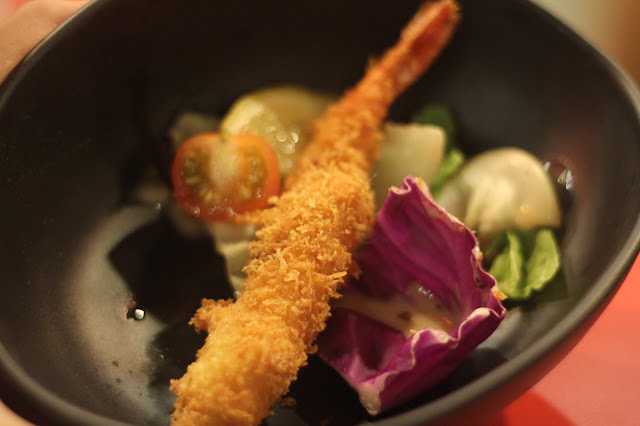 Thankfully, they now offer rice toppings too.
The curry sauce wasn't that spicy nor was it mild. Maybe in the future, they might want to ask or take note if the customer would like theirs on a different heat level just like their broths.
If allergic with shrimps, this would definitely be an alternative. Although the flavor was there, I would have wanted the curry sauce to be more on a different level. Maybe they could add up some spices and decrease the fluids in it to make the flavors more compact and make it more slimy and gooey and easy to get on the rice.
This beef yakiniku was a little plain for me. It had a sweet flavor from the caramelized onions. What is good with these rice toppings is that they used USDA products. Meaning, the beef came from a great source. I would have enjoyed it more if another dimension to the dish would be added. Usually, a sticky egg would do the trick.
If you love this sweet noodle dish, you would definitely like their take on it. I liked how they present it. They give it as a huge bowl that is already cooked. 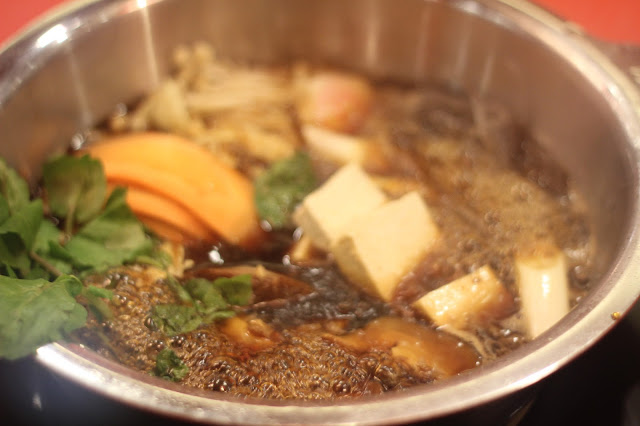 You could have it simmer for a minute or two to make it go boom-bang! The mushrooms definitely absorbed the flavors that I liked it very much. The noodles are familiar right?! Well they used chapchae. I liked it how it cuts off with every bite. It wasn't too soft and was cooked right. I think that the soup would be a little concentrated when left a little longer on the high heat setting. Maybe they could adjust the consistency of the soup to allow for allowance towards the concentration of the taste.

I will be honest. I am so happy that Ganso introduced this addition to their menu. Even if it only started early July and initially to two of their branches (Shangri-La and Greenbelt), this would really help people like me to go back and accompany other people (my dad) into having his shabu fix. I enjoyed the food and even the company. Thanks to Ganso Shabuway for having me.
Why almost complete? Maybe they could add more choices to their dessert. A meal isn't just right without it. I pray that Ganso Shabuway be able to create a dessert menu that would cater to behemoth eaters like me! I definitely have a sweet tooth! Argh! Diabetes layuan moko!

Disclaimer: I was invited by Ganso Shabuway to their tasting event. Rest assured that the opinions stated here are mine.
Tagged