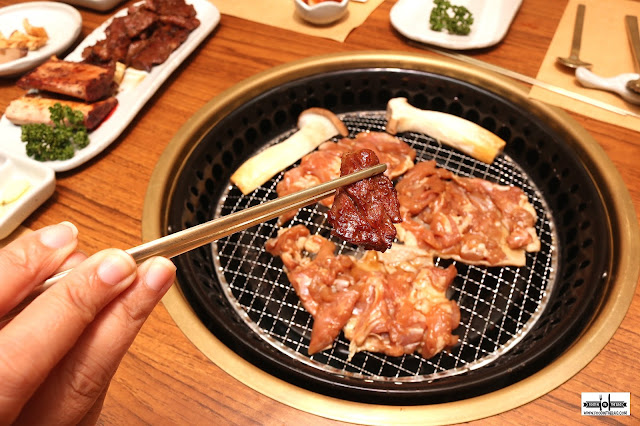 Korean food is one of the things that I look forward to when I go out. Unfortunately, I just don't like the idea of cooking and smelling like food after eating. Enter KIWA!
Kiwa is located on the ground floor of Solaire Hotel and Casino in Pasay. Just a few months old, this Korean Restaurant has definitely raised the standards. 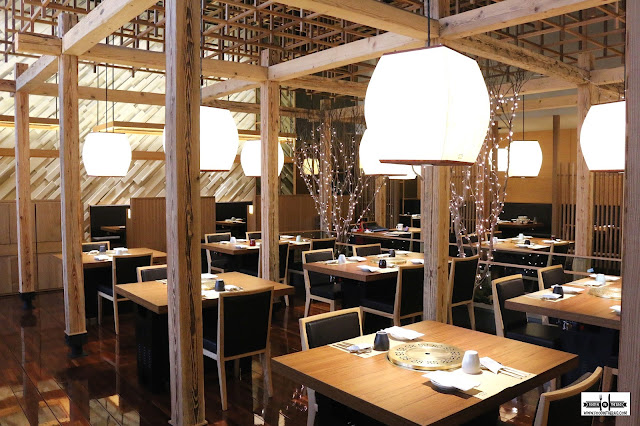 As you enter, you are transported to an amazing place. It is as if you are in Korea enjoying a delicious meal. Everything is authentic. From the utensils to the paper towel and even the wood carvings, these were all imported from Korea. Aside from the main dining area, they also have private rooms perfect for group gatherings. 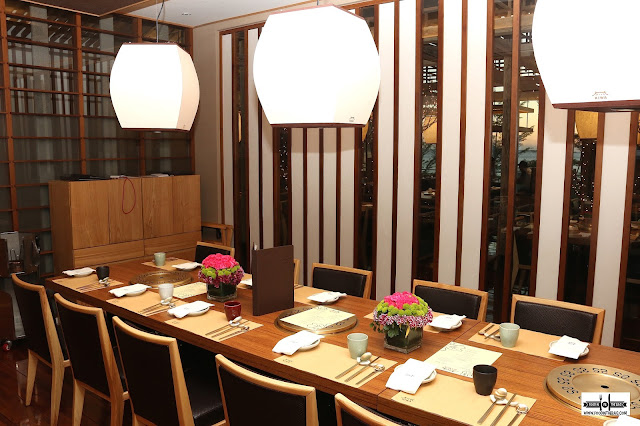 Each table has their own grill so that everyone would have a chance to cook their food.
Thankfully, the exhaust is really well planned and installed properly. Rather than having them hung from the ceiling, the smoke is vacuumed through a rig from under the table. That is why as you enter the restaurant, there is a small elevation noted on the flooring. Furthermore, you could also ask the staff to cook the meat on a different table near you. Just in case you are as lazy as me. 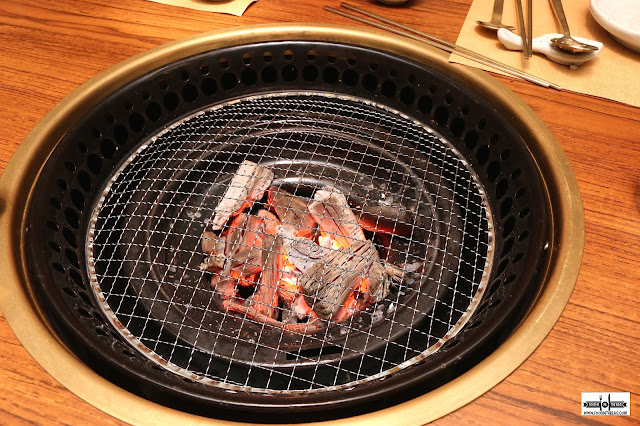 Believe me, you won't smell a thing once you go out of the restaurant. The food and grill smell, I kid you not, will not stick on you. Definitely the perfect Korean date place. 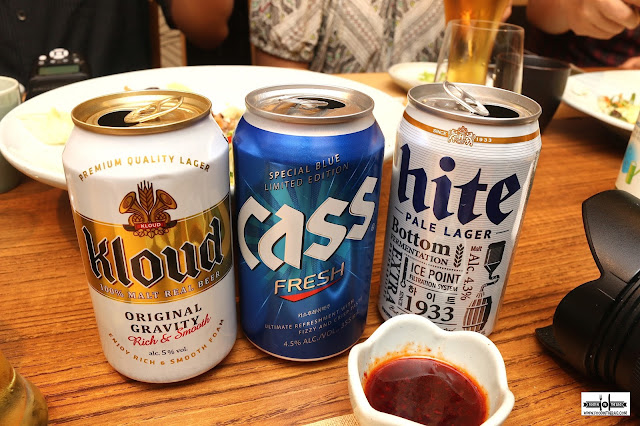 There were also a lot of drinks to choose from. Imported liquor gives the meal a touch of smoothness. 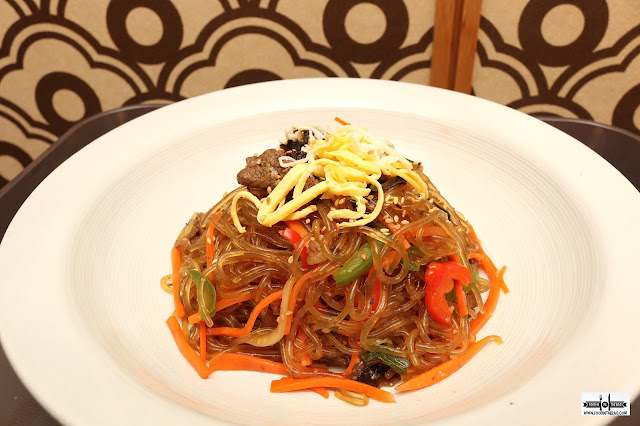 Starting off with a classic is definitely a must. The JAP CHAE is spot on. Pan fried glass noodles were cooked with beef and assorted vegetables. It had the right bite and sweetness. 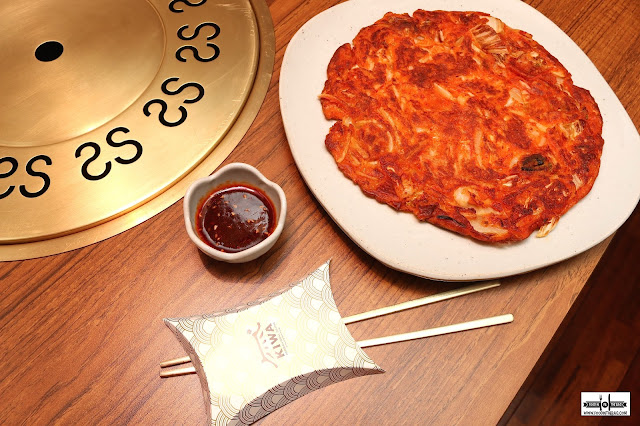 A surprise dish of the night was the KIMCHI JEON. This kimchi pancake is crunchy and not overly spicy. The dipping sauce, on the other hand, packs a punch. I was hooked to this dish. 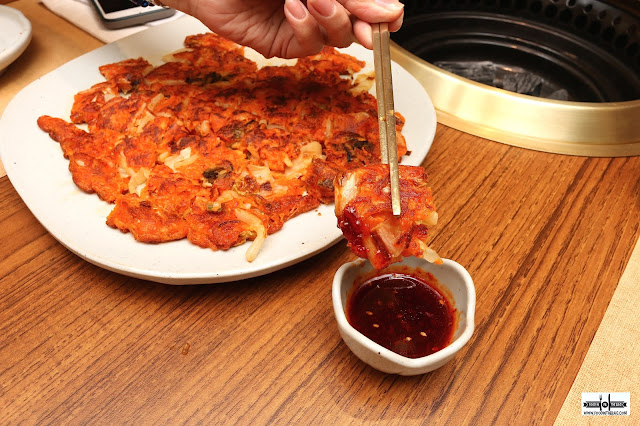 The top choice for starter though would have to be the YUK HOE. This soy based raw beef is mixed with pear and vegetables. 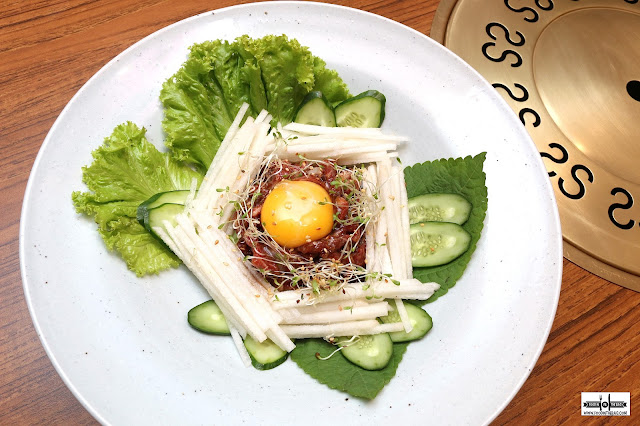 You could say that this is like a tartare but the addition of the PEARS gave it a crunchy texture and sweet flavor. This will work well with a beer or two. 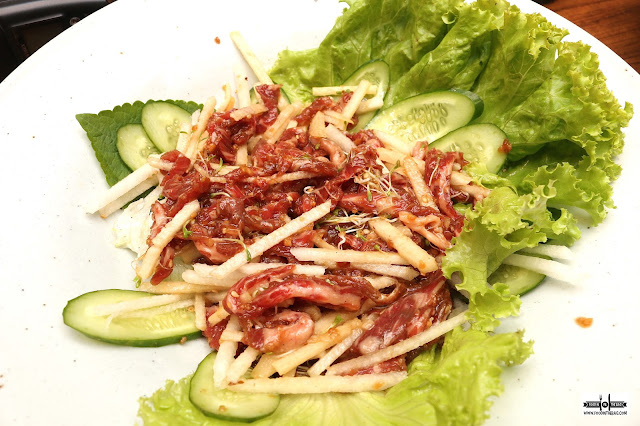 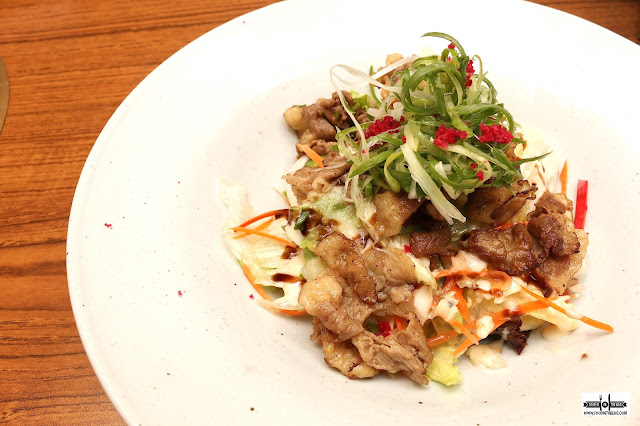 The CHADOL BAKI has pan fried brisket on top. It's basically a win win. Meat eaters like me would just get those delicious looking brisket. Another must try is the TOMATO YANGSANGCHU. 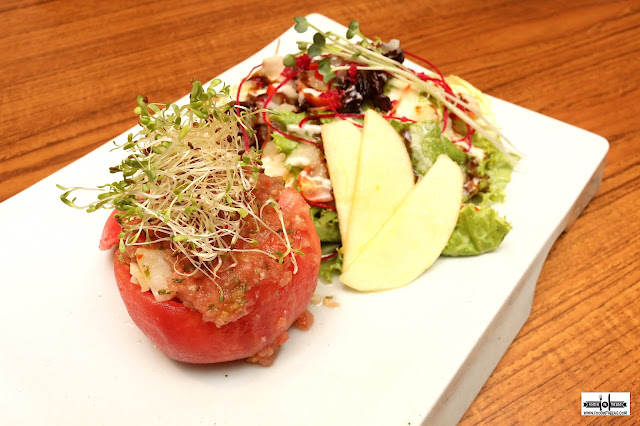 Seasoned seafood is placed inside a tomato and partnered with greens. I just went straight for the seafood inside. 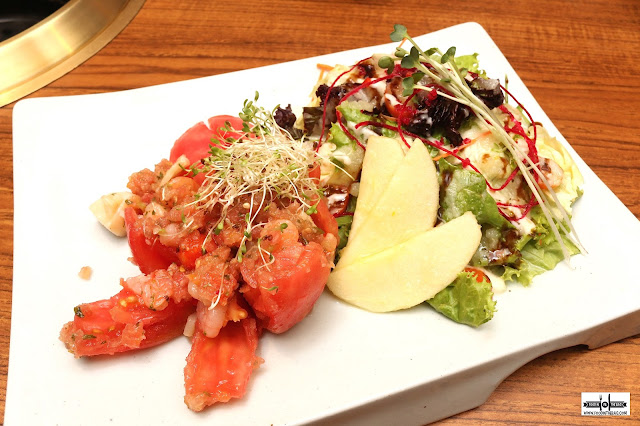 One dish that Koreans are known for are their BIBIMBAP. KIWA's version is like the fully loaded. Everything that you would think off they placed it there. From colorful healthy ingredients to downright delicious kimchi. 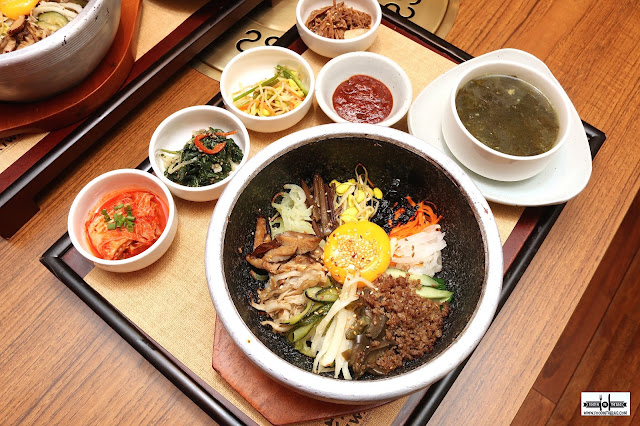 After going through a number of choice starters, these were brought out. Garlic and a tomato based sweet sauce used for dipping. Once you see this, you will be in for a treat. 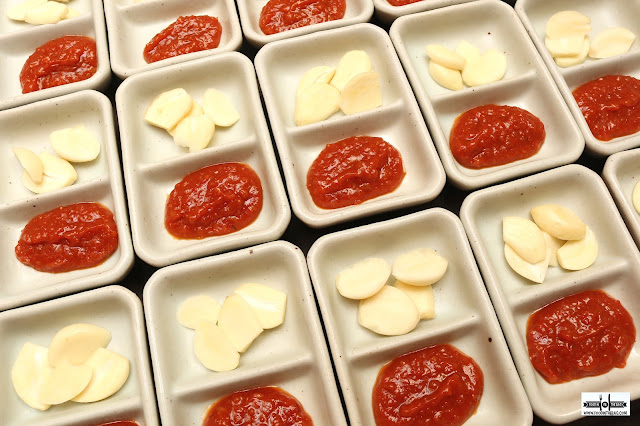 First up was the YAN NYEOM GALBI. 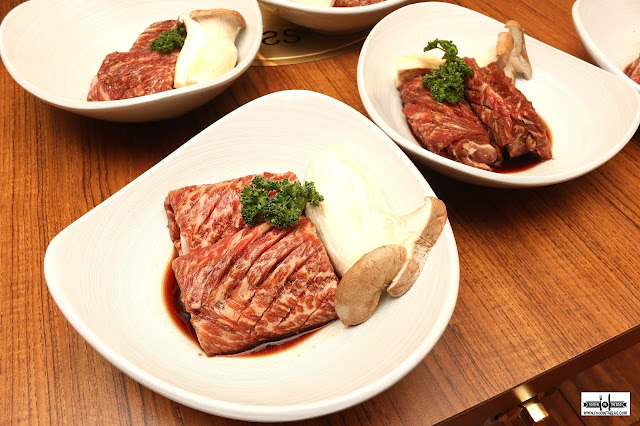 This is the BEEF SHORT RIBS marinated with special sweet soy sauce. This was the star of the night. The beef was tender and juicy. Each bite would lead to ooh's and ahhs in the crowd. 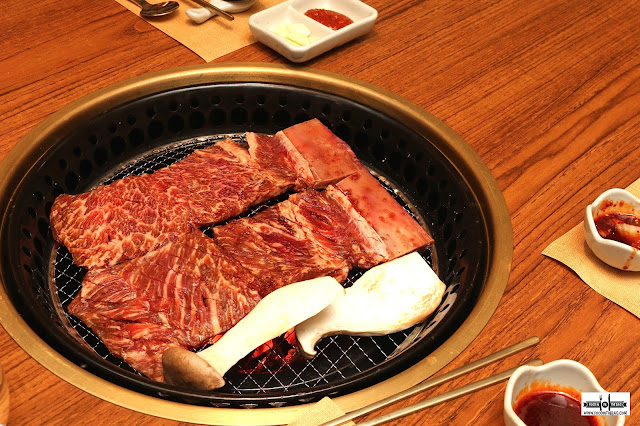 You could partner it with the vegetables provided to make a roll. 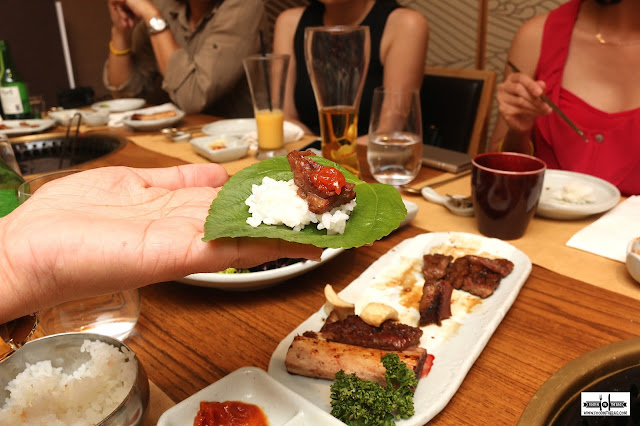 Better yet, just get an order of extra rice and eat it as is so that you could fully taste and appreciate the texture of the short ribs. 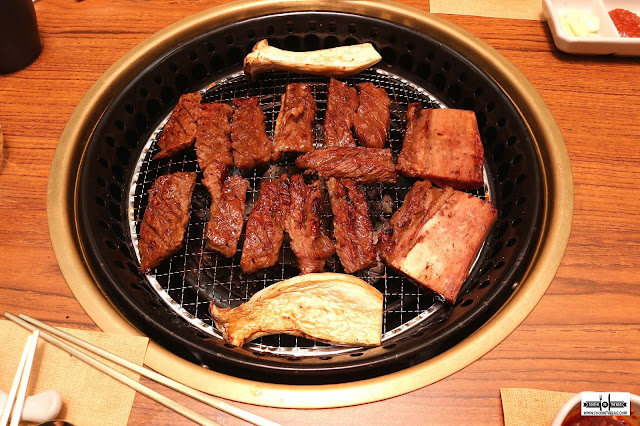 One can't live with beef alone so grilled chicken was up next. 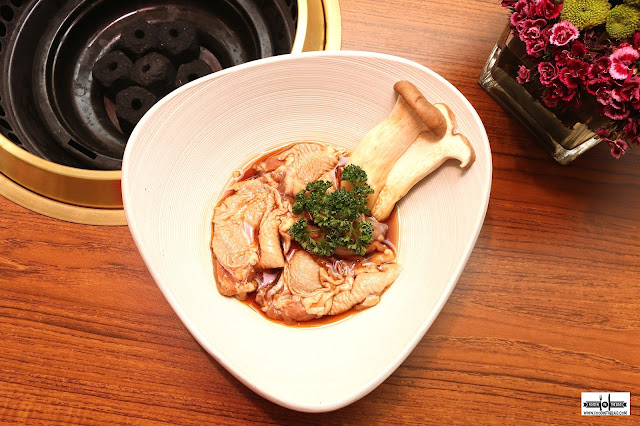 The chicken wasn't spicy but was marinated with barbecue flavors. 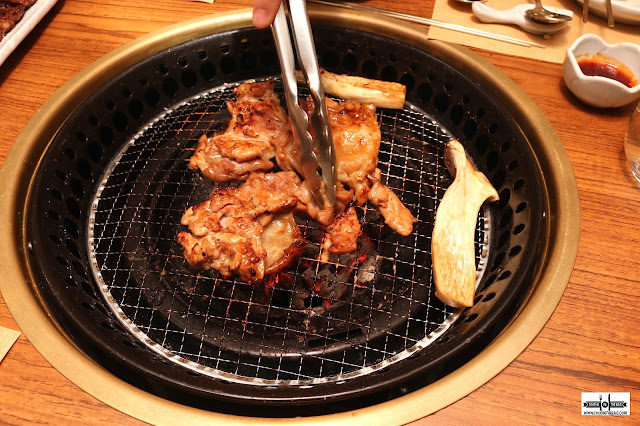 A perfect alternate to beef just in case you aren't allowed any. 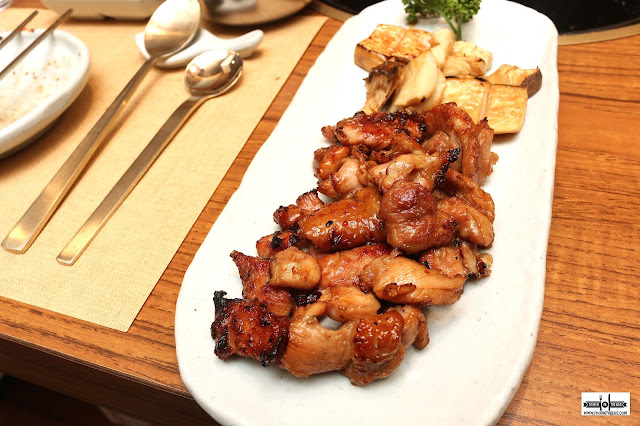 To sum up the night, GRILLED MIXED SEAFOOD was also cooked up. 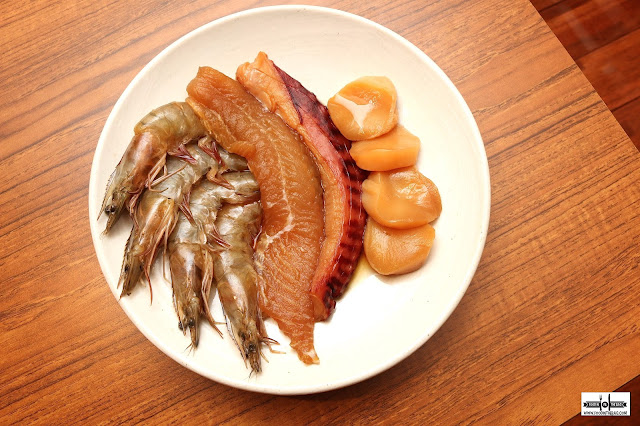 The texture of the octopus was actually surprising. I was hesitant at first, thinking it might be rubbery. After my first bite, I was wrong. The meat was perfectly cooked and soft. This just shows the freshness of the tentacle. 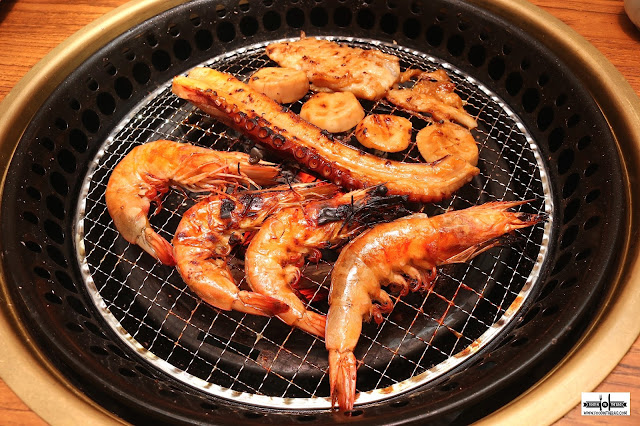 Believing that I was full, I was about to call it a night when the staff came in with this dish. The SPICY CALAMARI was served with noodles. It had a spicy taste and somewhat kimchi presence. 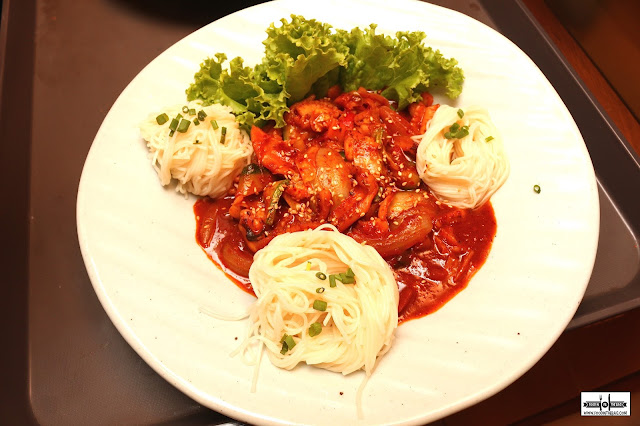 Dessert was their PATBINGSU. A Korean styled halo halo with red bean paste and other goodies on top. The ice wasn't as fine as I would have liked but we were informed that the ice machine was being flown in within a few weeks. 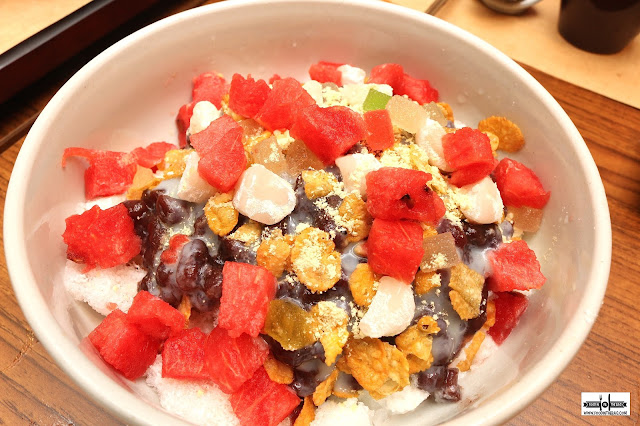 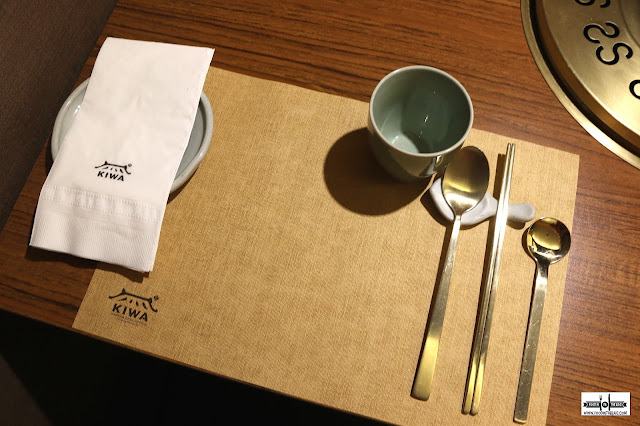 KIWA is definitely my go to place for a Korean Food Date. Granted that the prices might be a little bit expensive but you would get what you paid for. Honestly, I've been to this restaurant twice in a span of a week. I'm amazed at the level of service from the staff and also the delicious dishes that they bring out. Simple yet done great. Awesome. 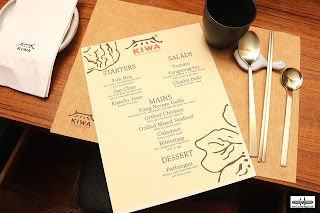 Disclaimer: wrote this based on my experience. was invited to this event.
Tagged