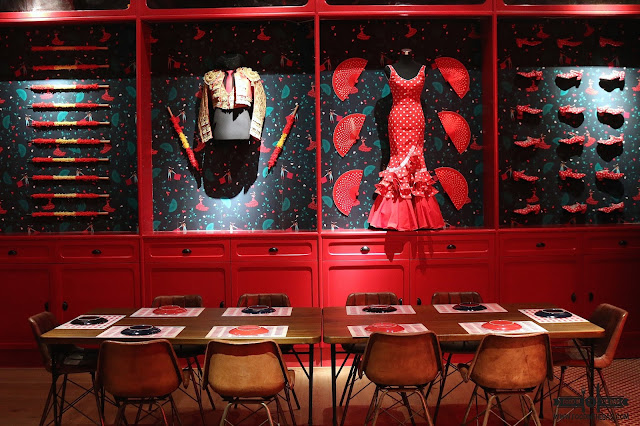 Sexy, passionate and very relaxed. First impression of TOMATITO and it didn't fail. Opening up in BGC today gives everyone another reason to stay off the streets and head on over for some happy hour delight. 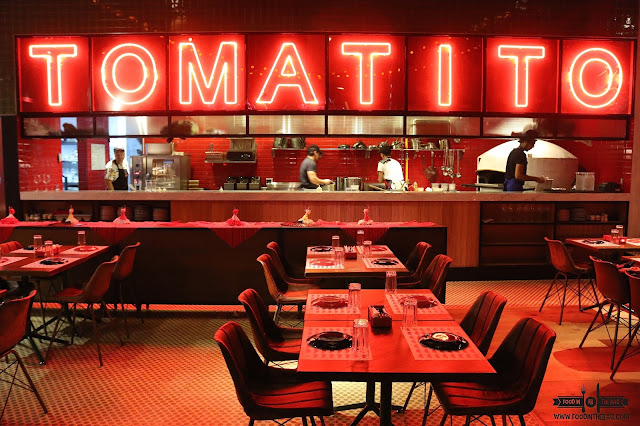 Traffic is definitely nightmarish in the metro but things are starting to look up. When stuck in BGC because of the rush hour madness, there's a new place where you could spend a few hours relaxing and enjoying good food and fantastic drinks. Brandishing a neon lit sign, TOMATITO seems to be the right place for one amazing night. Being the brain child of CHEF WILLY TRULLAS MORENO, you won't go wrong with anything you pick off the menu. The concept started in Shanghai and was brought in by the group that handles Rambla, Las Flores and La Lola Churros. 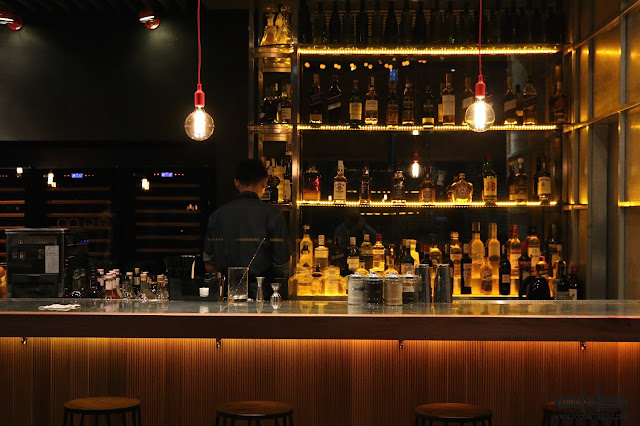 Drinks are well curated and given a fresh kick. You are free to choose between different base liquor and you could even customize a drink yourself. 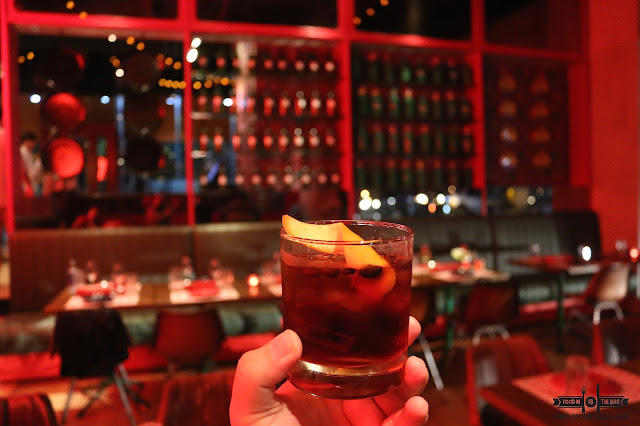 Talking to Sergei, one of the owners, he mentioned that TOMATITO was named after a famous Spanish Guitarist. The design and the interior of the restaurant seems to be perfect to his kind of music. Relaxed and very modern. It revolves around it. The menu in itself is special and well thought off. Familiar flavors as he also noted. Soon, they are going to have brunch and lunch specials which are different from dinner. In the mean time, service is having a run through and we did what anyone would. Offer ourselves as test subjects. Take one for the team, I would say. 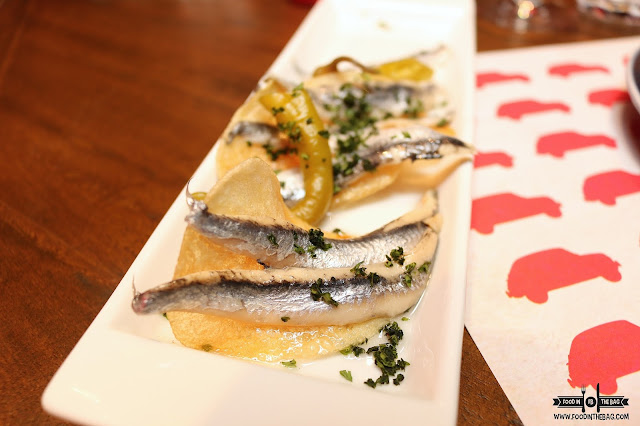 BOQUERONES (08). Need anyone say more. Right from the get go, the vinegary flavor woke up our taste buds. Placed on top of crispy chips, it gives a whole lot of meaning to seafood with a bite. 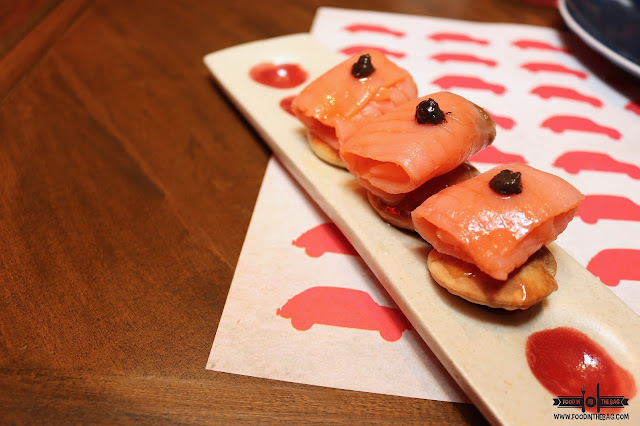 A signature dish, the SALMON TNT (18) must be ordered every time you visit. "Everything must go in one bite." according to Chef Willy. If you follow this advise, you'll quickly understand why. The flavors explode in your mouth. The smoked salmon mixes with honey and truffle to make something creamy and delicious. 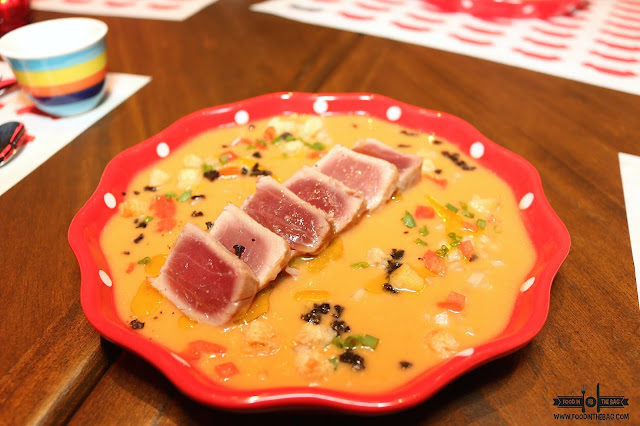 Making good use of local seafood, the ATUN CON GAZPACHO Y OLIVAS (36) or semi cooked tuna loin with gazpacho and olives brought out simple yet filling flavors. The SKIPJACK TUNA  was not overly salty and complimented the gazpacho really well. Simple and refreshing. 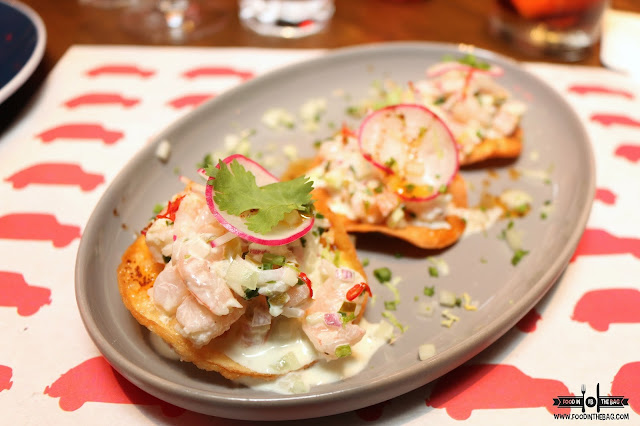 Shrimp lovers would take note of the MONTADITOS de GAMBAS (16). Marinated prawns are stacked up on chips to create that exciting crunch. Moving on to something heavier, the CROQUETAS DON JULIO (23) was introduced. Spicy Chorizo and cheese were mixed together to create this croquette. A bit spicy but with a drink in hand, you could easily get over it. 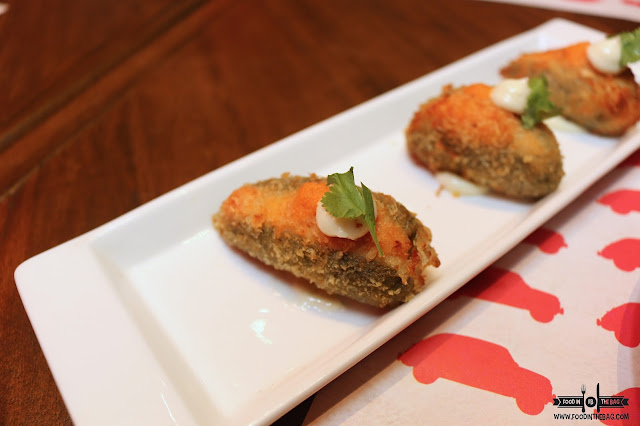 The FILETE CON AIRBAG (15) or cheese and tenderloin steak airbaguettes was a crowd-pleaser. Thinly sliced steak are placed on top of crunchy mini baguiettes to give you a meaty tapas. 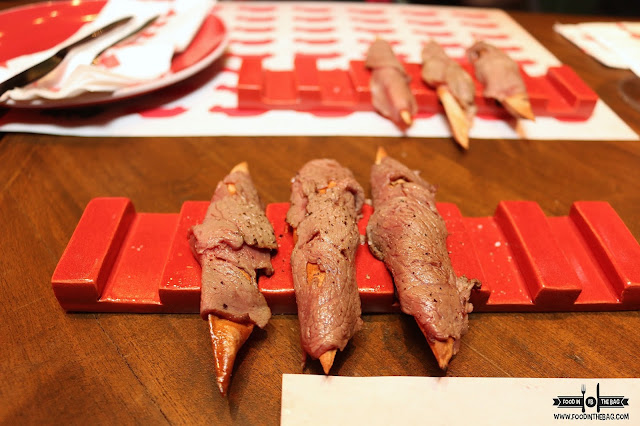 The PIMIENTOS RELLENOS de COSTILLA SETAS y MANCHEGO (47) are piquillo peppers that were stuffed with mouth watering slow cooked short ribs. It was also mixed with mushrooms and manchego cheese that gave it a creamy bite. 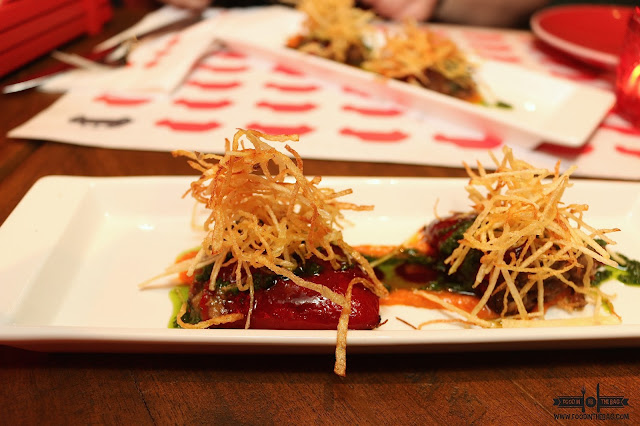 Not contented, Chef WILLY saw it fit to bring out the big guns. Starting off with some SECRETO IBERICO con ROMESCO y ESPARRAGOS (42). Slow cooked pork "secreto iberico", with tomato, almond and pepper in romesco sauce. Very traditional yet modern might be a nice thing to say but it was in the execution that gave it flavor. 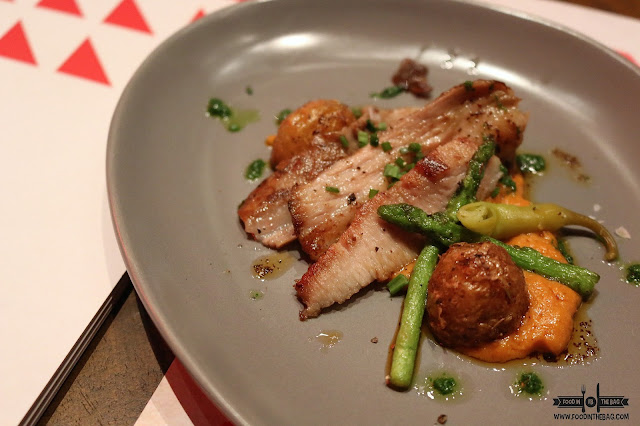 Another must order would be the FILETE a la PARRILLA (46). Premium Tenderloin steak is served with spring onions and truffle mashed potato. Granted that this might be just tasting portions, the meat is tender and very smooth. Not overly cooked and well seasoned with simplicity. Salt and pepper worked. The mashed potato did it justice as well. 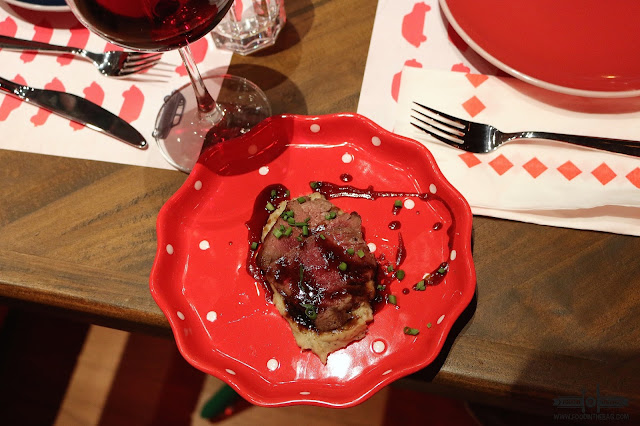 After this dish, there was a breather. Everything was well planned and dished out. Here, we were able to witness EL WILLY at work. Through the open kitchen, we find him creating another traditional dish. 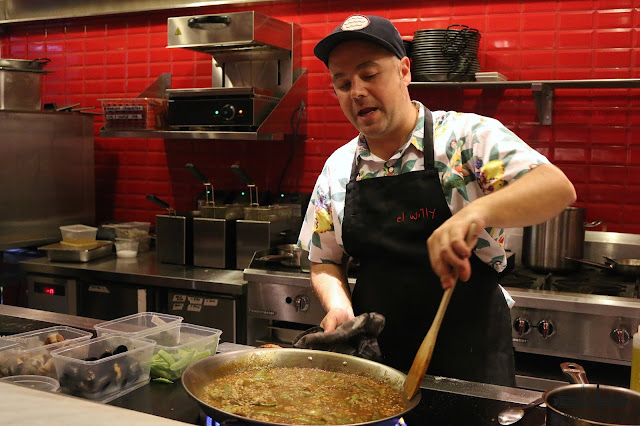 The PAELLA VALENCIANA (53). Very familiar with Filipinos, his version stay true to its roots. Cooked with chicken, rosemary, and snow beans, he serves it with aioli sauce and some lemon just to give it another dimension. 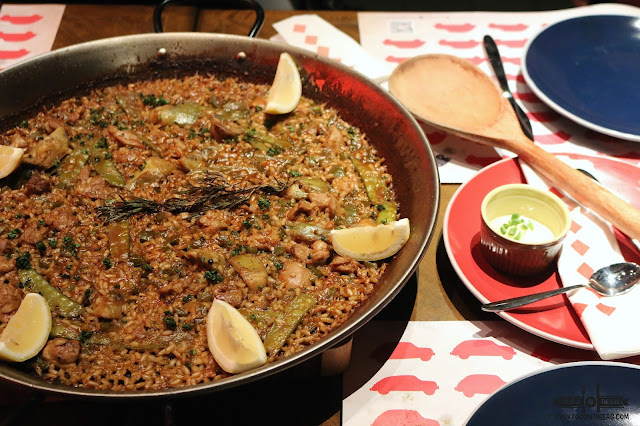 Best advice given by him would be to scrap off the bottom. "Get the Socarrat", he says. That being the burnt crunchy rice underneath. It absorbs all the flavors and gives off a different bite. 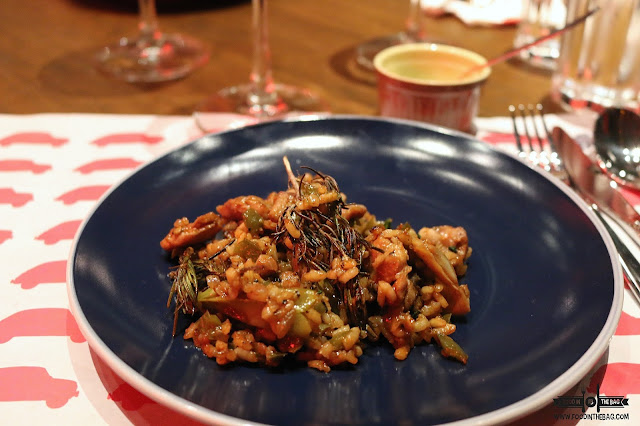 For dessert, you might want to go for the LAS LOCURAS DE CARLOS (64) or a sexy mixed dessert with everything you might think of. A bit of cheesecake, brownie and even some jelly. If this is a bit too much, the PANACOTA (63) with sangria fruit toppings might just work. Perfectly executed with the right texture and bounce, the panacota stayed true to its form. 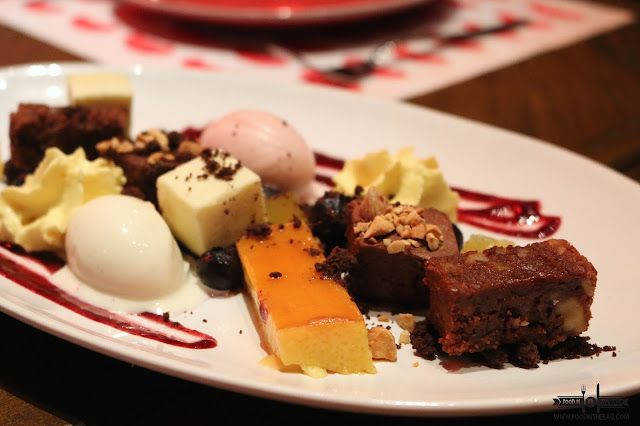 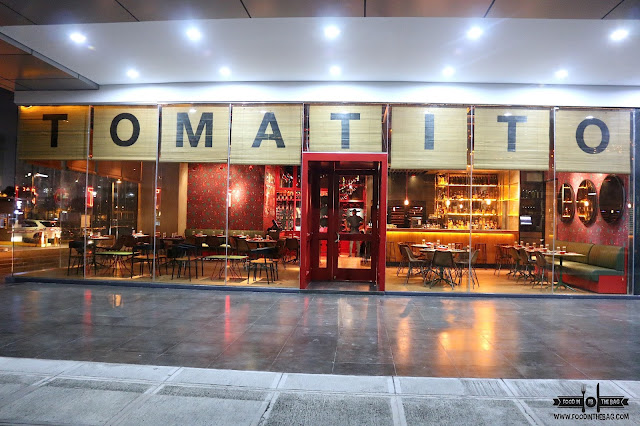 At TOMATITO, they welcome everyone. No need to be intimidated or what not as the service is straight forward and very helpful with your queries. If you don't know what to get, you could opt for the chef to create a menu for you and it is at a fixed price. Other than that, whatever you do, get the SALMON WTF and thank me later.

Parking is available right in front of the building.
Note- Names are quite hard to remember. Hence, I placed a
number after each dish for easy reference in the dinner menu.
Tagged