KARMA SUSHI BAR GRILL: The Japanese Resto to visit when in Flagstaff, Arizona 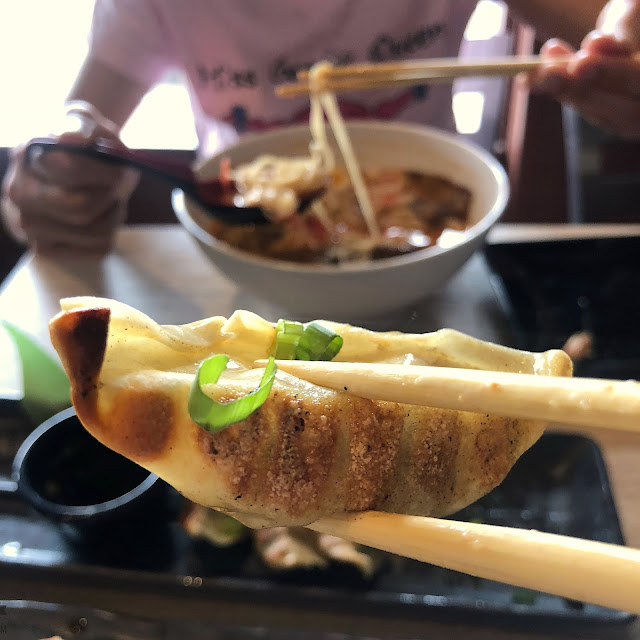 By now you might have been wondering, where is Jeng? ... I'm thinking about the same thing too. The past few months have been a blur. I've been to different places and have been bouncing from hotel rooms to apartments and even dorm-like residences. Don't worry though as I think I'm settling down. Recently, I just moved to Flagstaff, Arizona. In case you're wondering where that is, it's near the Grand Canyon. About a hour and a half drive away, you could say that this town is the perfect stopover. 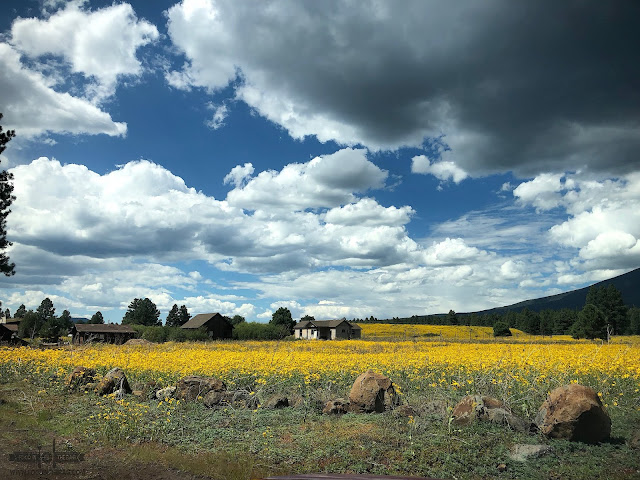 The town is actually almost 7,000 ft up. So, it's pretty cool here unlike Phoenix (don't get me started). To be honest, it feels like Baguio. Although, it could get pretty cold during the night. As low as 8 degrees C and even more during the winter. Yes, it does snow here and there's also a nearby ski resort to prove it. Anyway, I'm getting all mixed up talking about my left from my right when I'm supposed to write about my first decent meal in ages. 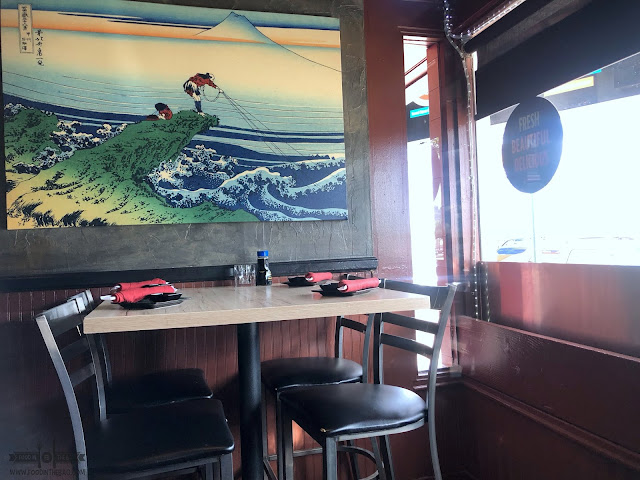 You see, I have been craving for some Japanese food. For the longest time, I have not had a good restaurant meal. If you've been following me (thank you very much), you would know that I would eat everything and anything but when I'm craving for something, I would move mountains and even fly out of the country just to get my fill. Thankfully, there was a highly recommended Japanese restaurant nearby. So, we visited KARMA SUSHI BAR GRILL. 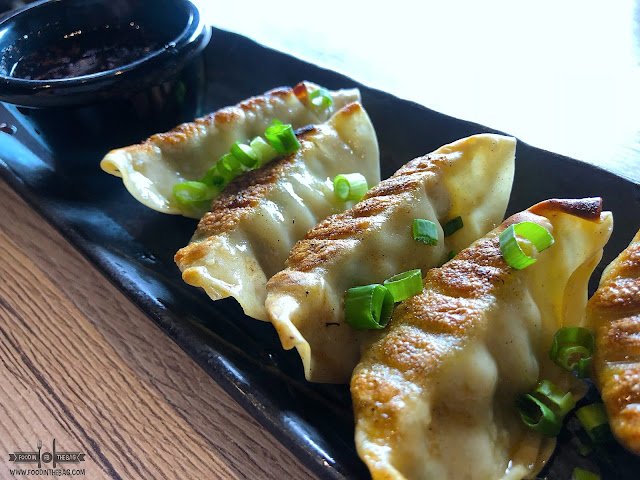 Located along the iconic ROUTE 66 and just across the Amtrak station, KARMA SUSHI BAR GRILL is a great place to spend your lunch, snack, dinner, and late nights. Other than serving delicious Japanese fare, they also have a number of drinks that would make any thirsty person jump for joy. So believe it or not, they have happy hour treats. To start things off, we had the pork gyoza ($6). It was a little bit oily according to my lunch mate but to be fare, it was just right for me. Gyozas, I believe needed to be "burnt" on one side to give it that color. Flavor wise, it was pretty good. 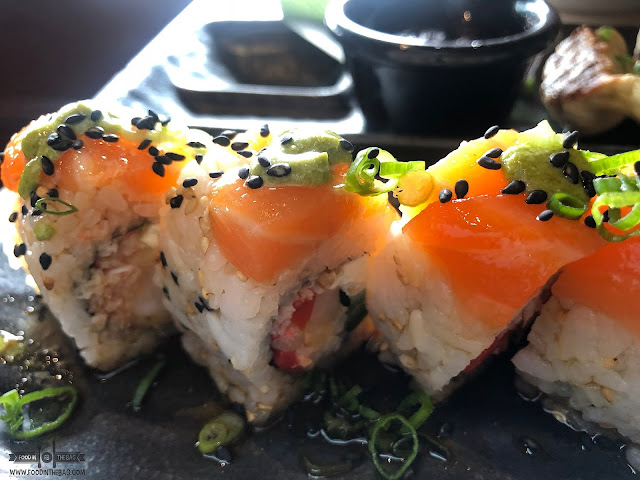 You can't really go to a Japanese restaurant without ordering a roll. We went for the Paradise ($12). It had a number of ingredients that would make you question your decision but believe me when I say that it works. There's ebi tempura, snow crab, a little bit of jalapeno, with cream cheese, and topped with salmon. Although you might end up just tasting the cheese, you could definitely appreciate the flavors each part gives to the whole dish. 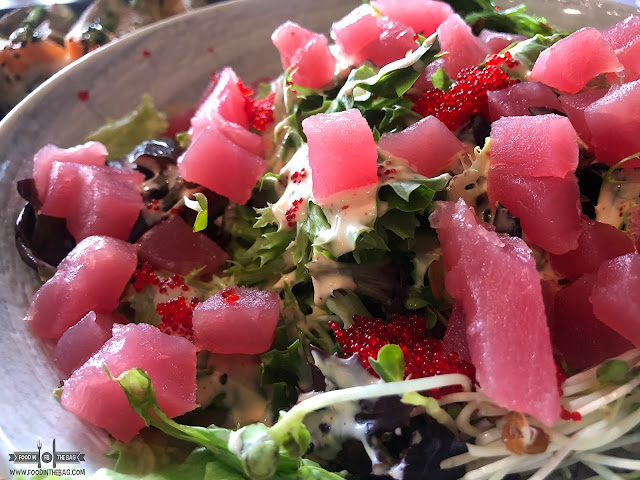 Thinking about a different dish, I went for the SPICY TUNA SALAD. I was really happy when I saw the generous fresh cuts of tuna on top of greens, wakame, and a mayo based dressing. Even if it wasn't what I was expecting, this was pretty good. 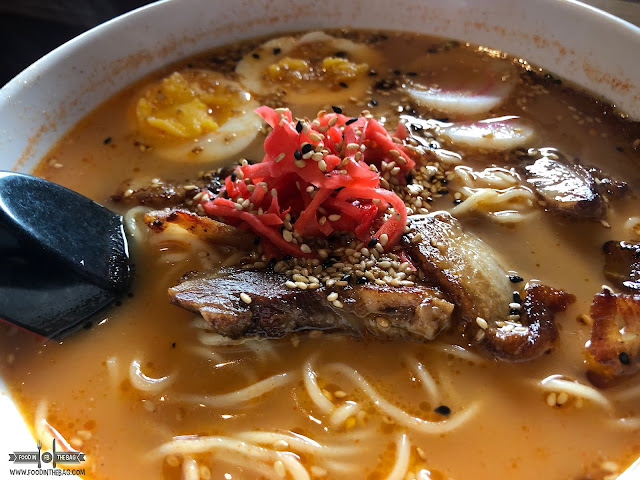 My lunch mate went for TONKOTSU. A typical ramen would be your tonkotsu. In terms of flavor, it's similar to some of the ramens I have tried in Japan and in Manila. If you're up for something warm, you can't go wrong with it. On the other hand, I wanted something simple and familiar. I ordered the EBI UDON. The difference between the ramen and the udon would be the type of noodles and the broth in which they are served. Ramen are generally heavy. Udons, not so much. I'm happy to report that, the noodles were al-dente. BUT, the broth itself is definitely UDON but I would have wanted KARMA SUSHI to have given it a little bit of twist to make ti more memorable. 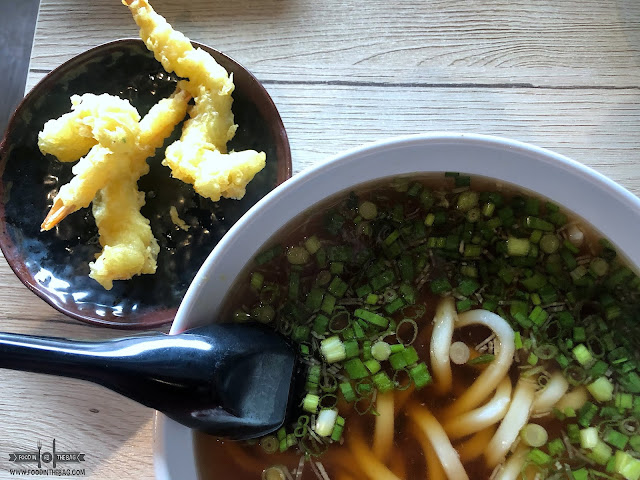 Food In The Bag is now in Facebook. Click Here to follow and like.
If you are into INSTAGRAM Follow me @foodinthebag.
Before I forget, the ebi tempura that came with it was pretty good. Not extremely good like the ones I had in Fukuoka and Osaka but they're decent. PROTIP: go on an off-peak hour. They could get busy.

KARMA SUSHI BAR GRILL is located on 6 E Route 66, Flagstaff, AZ 86001. They're open from 11am and would close either 10 or 11pm. Pay parking is available infront (parallel) and also across.


Disclaimer:Paid for the meal. Wrote this based on my own experience and opinion.
Tagged