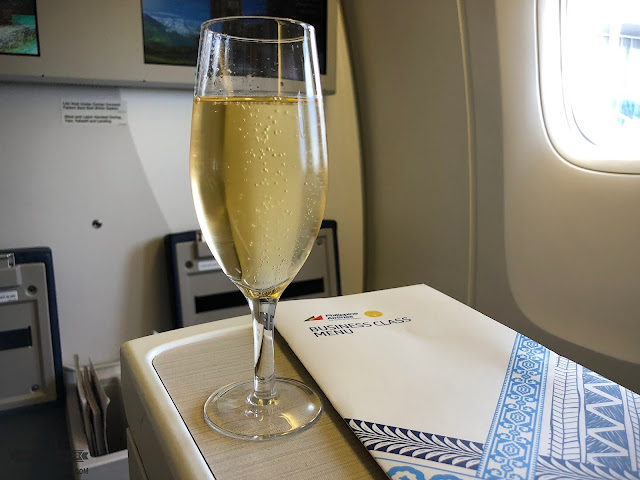 During my visit to Manila a few weeks back, I had the opportunity to upgrade to business class via Philippine Airlines. Granted that the tickets in Business Class cost an arm and leg for normal folks like us, there is a chance that you might get lucky. One way is that you participate in the bidding process. A few days before the flight, Philippine Airlines sends out an e-mail asking if you would want to upgrade. There, you could bid to be upgraded. For different international flights, they have minimum bids that you could enter. Lucky enough, I got in with the minimum bid. 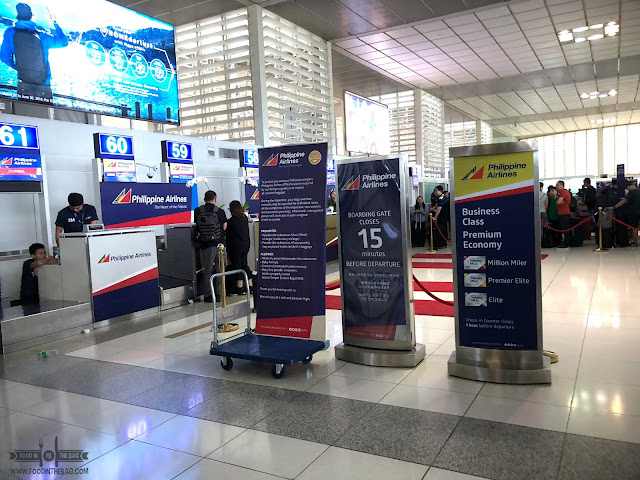 Most Philippine Airlines flights fly out of TERMINAL 2 in the Ninoy Aquino International Airport in Manila. Once you enter, check-in counter for business class greets you. Since I was flying to the United States, there was a separate counter at the end just for business class. It was because additional security was needed for people flying to the States. Prior to bag check-in, another physical check of bags would be done even after the xray machine check prior to entering the building. 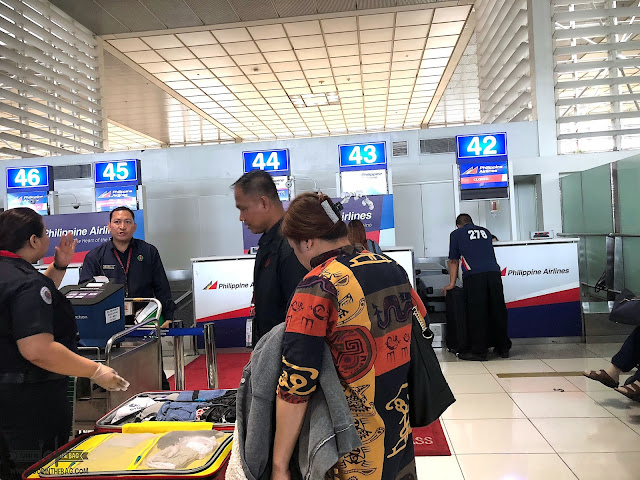 Once at the counter, the staff goes through your papers and even asks you if you want to change seats. Since Philippine Airlines uses a Boeing 777-300 ER for these flights, I was able to check out what the seat arrangement would be via seat guru. Take note, you won't really have any problem with toilet lines since there is more than enough for everyone in Business class.  If you're seated where I was (1H), there's actually one infront available to you and 2 at the back, in between the two sections of business class. PROTIP: If you don't want people walking beside you while they enter the plane, go for the forward galley. Also, online seat change via website isn't really truthful. There are other empty business class seats once you check in the counter.

Whenever you're flying out of terminal 2 in NAIA, I would suggest you arrive a bit early so that you could use the lounge. Business class tickets gives you access to the Mabuhay lounge. 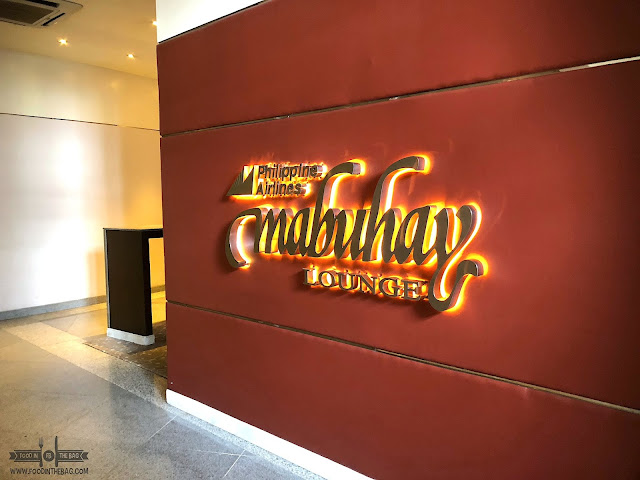 Once you pass through immigration control and another security checkpoint, head towards gate 8. Just after gate 7, you'll find the entrance to the Mabuhay Lounge. 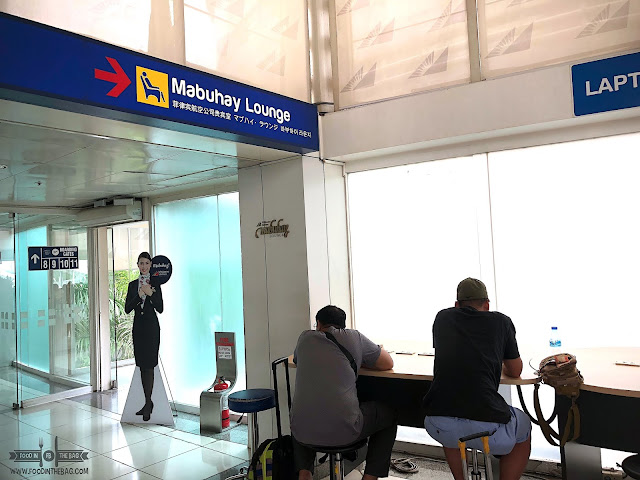 After showing your boarding pass to the front desk, you get access to the lounge. Once you enter, you're greeted by a darkened room where you could actually rest up. Here, there are also a couple of computers that you could use to work up. If not, there are tons of sockets around for your laptop and to charge your other devices. Internet access is pretty good considering this is Manila. 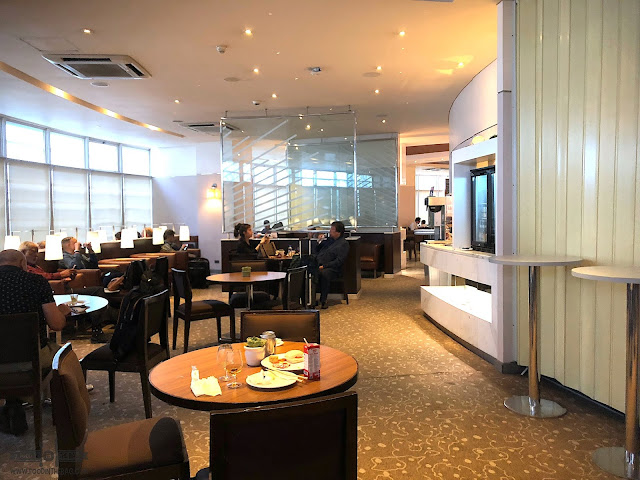 The main area has a cocktail/ drink area where you could ask for some spirits, coffee, tea, and water bottles. 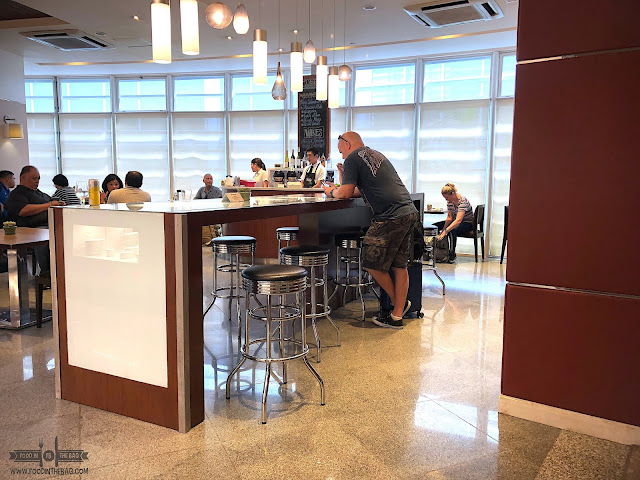 On the other side, you have the buffet line up. There are different cold drinks available. From Juices, more coffee, tea, soft drinks, beer, and even yogurt. 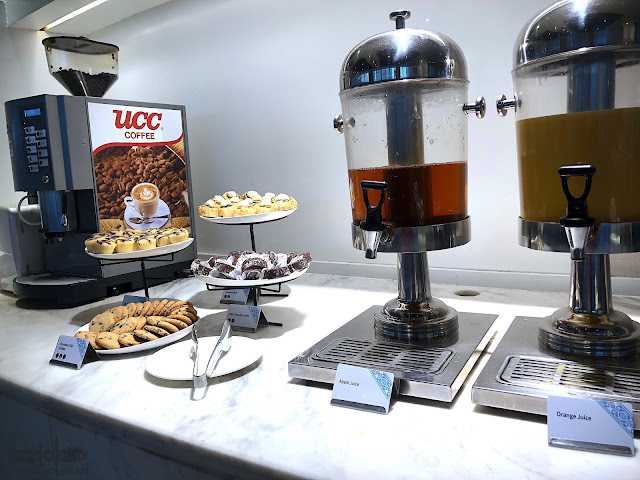 The food available is just okay. You get your fill but that's it. There are different dumplings choices which I believe changes during the morning, lunch, and dinner. 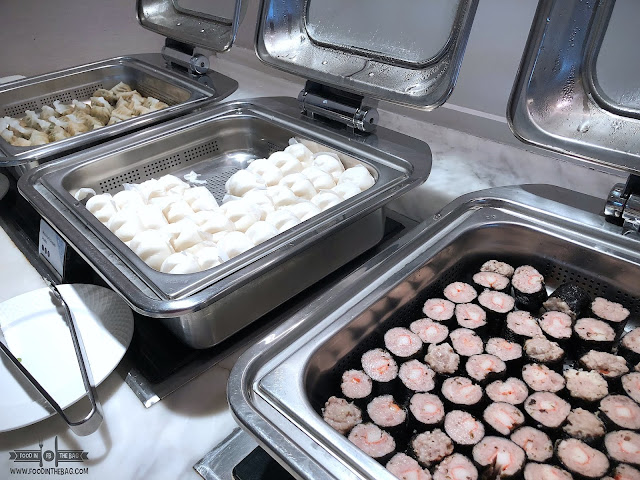 Small snacks like mini burgers and mini pizza and the ever famous arroz caldo or rice porridge are available. 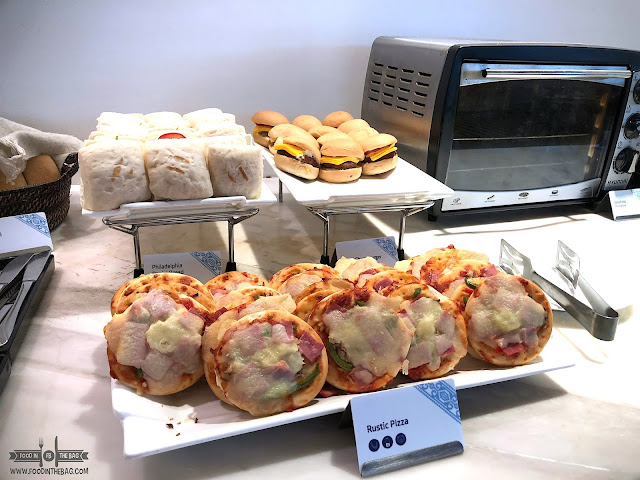 On a separate table, they offer "made to order" noodle dishes, fruits, and even salad. 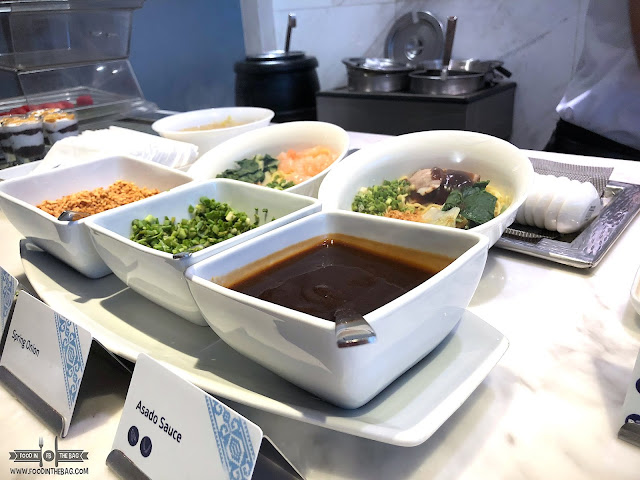 I was feeling a little hungry since it was a morning flight so, I snuggled myself into a corner and got a number of dishes to try. The mini pizza and sandwiches looked a bit dry. The dumplings were just okay. On the other hand, the noodles and the arroz caldo were pretty good. They both hit the spot. 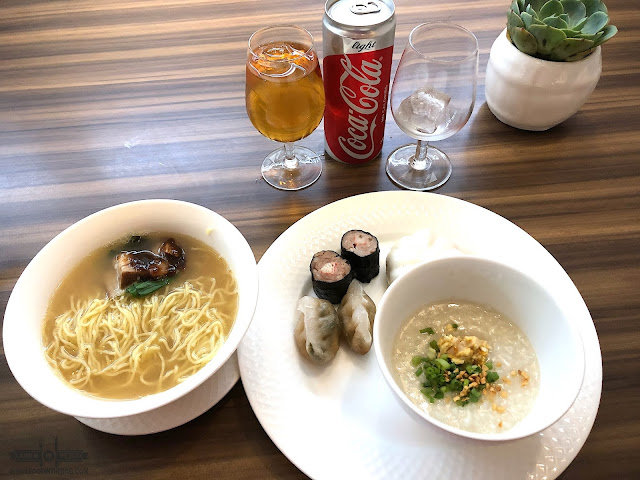 Toilet wise, it may get crowded during the morning rush. There's a couple of stalls and bidet installed. Toiletries were present such as mouth wash and all the usual things you will see in a 5 star hotel. 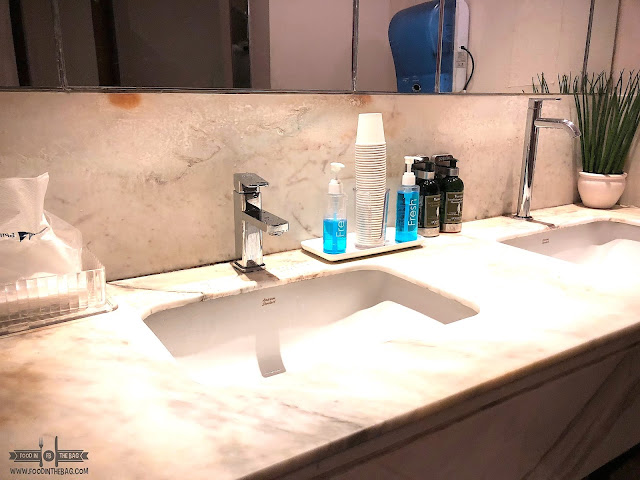 If the line is pretty long, one could ask the staff for access to the "not-so-secret" toilet. I was able to do my business here in piece. If you wanted to freshen up, they also have a shower that you could use as well. 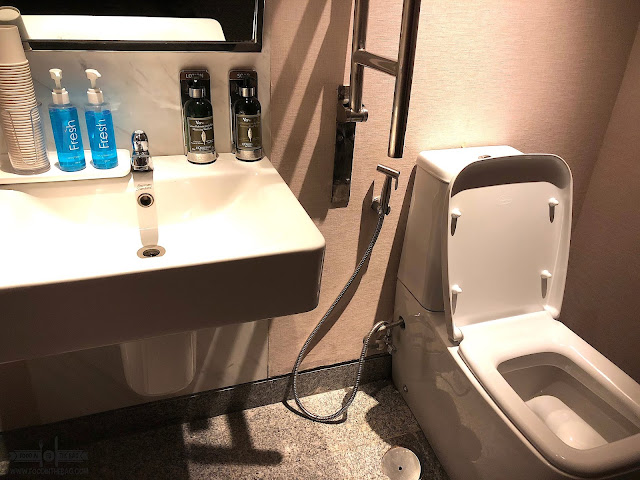 Since I had a business class ticket, I could board the plane anytime I wanted. Going to the United States would warrant that you pass through a cordoned area and another security check point. From there, a separate line is available to business class ticket holder. Lining up and getting in early would be perfect since, it's one of the perks. 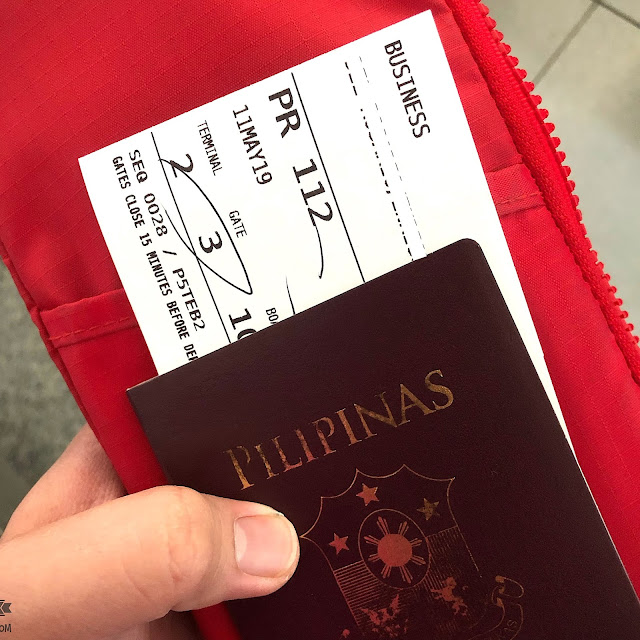 The area might be a little bit crowded so it's better to leave the lounge a few minutes prior to boarding time instead. 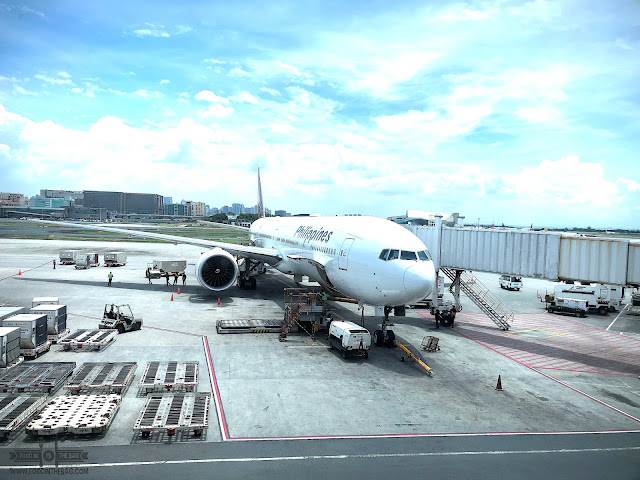 Once seated, you are given a glass of sparkling drink and a hot towel to freshen up. Since I was in the forward section, I had a glimpse into the workings of the crew during the flight. If light or sound easily bothers you during a long haul, I would suggest you go for the 3rd or 4th row. 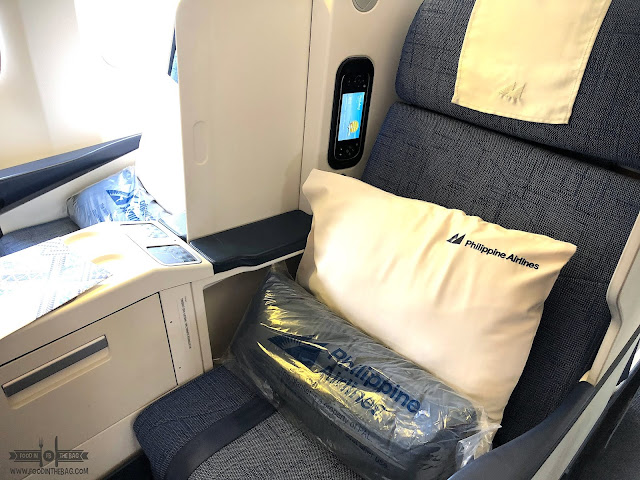 Leg room and space was pretty good. There's a firm pillow and a duvet present. You could actually store your blanket and other things in the storage compartment infront of you. It's like a mini cooler but it actually turns into an extension of your seat once you lie down. 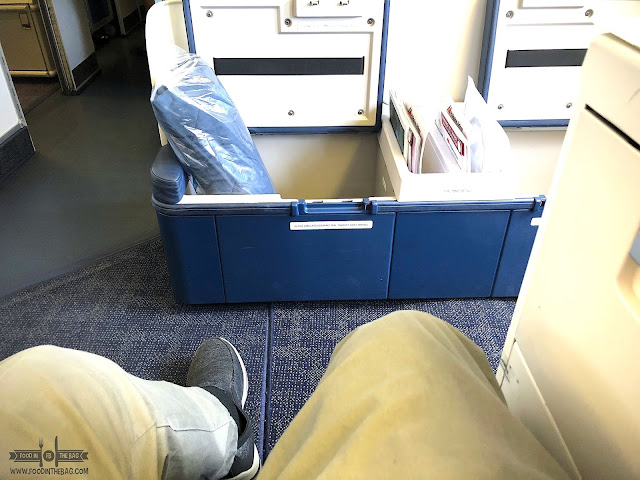 The overhead bin is also pretty roomy since, there's only a number of passenger for such space. 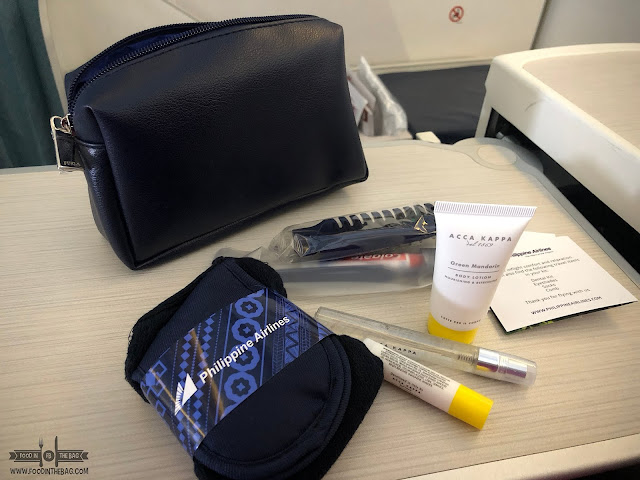 The amenities kit contained mostly Acca Kappa. Socks, and even eye covers were there. I usually tend to just keep these stuffs as little souvenirs rather than using them. A pair of slippers were also provided. You also had noise cancelling earphones to use. I was actually happy with Philippine Airline's inflight entertainment. The selection was pretty good. 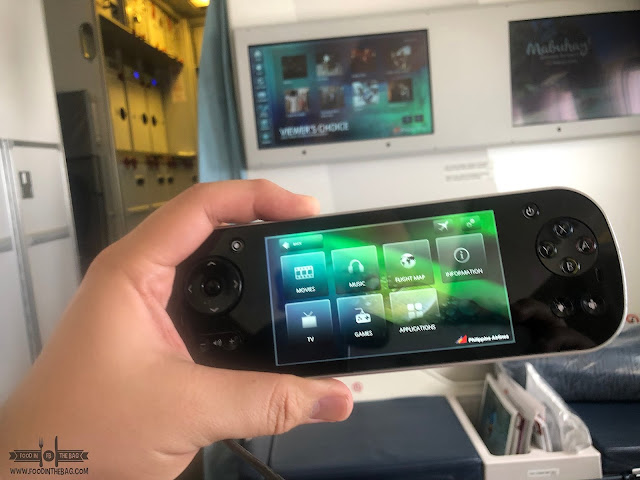 The screen was pretty big considering and the inflight remote control was pretty useful. I could also access the flight time and see what's outside through the system. Aside from the free wifi available to all passengers, the business class has an additional 100MB to use. As such, it's better to use the free one prior to this once. It's pretty fast and useful for e-mail and even messaging apps. 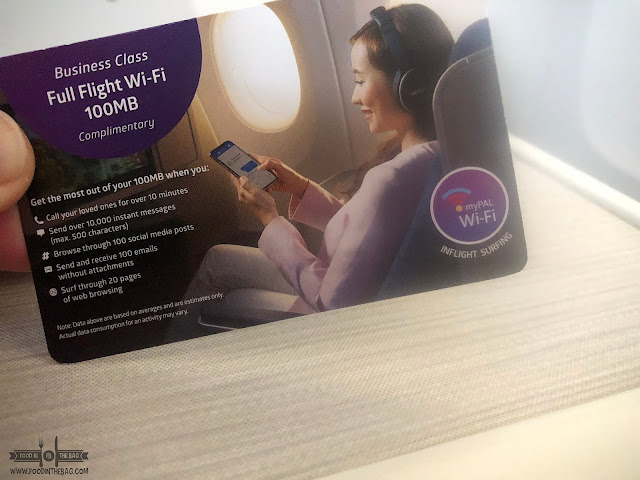 Prior to take off, the cabin crew also serves other welcome drinks and refreshments. They also ask for your meal preference. Philippine Airlines offers on demand meals. Meaning you could ask your meal to be served when you want it to. I should have used this amenity as getting the meal through business class isn't as fast as I wanted it to be. They try to serve it by course and for a big guy like me, I tend to eat everything in one go. In any case, here's my meal experience. 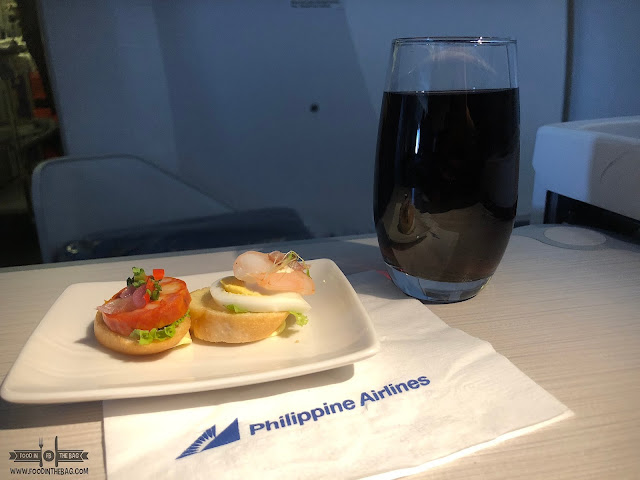 Amuse bouche was served first. Together with my drink of choice. They had cocktails available and other liquor but since I was going into the US and I didn't want my tummy grumbling, I just went for soda. 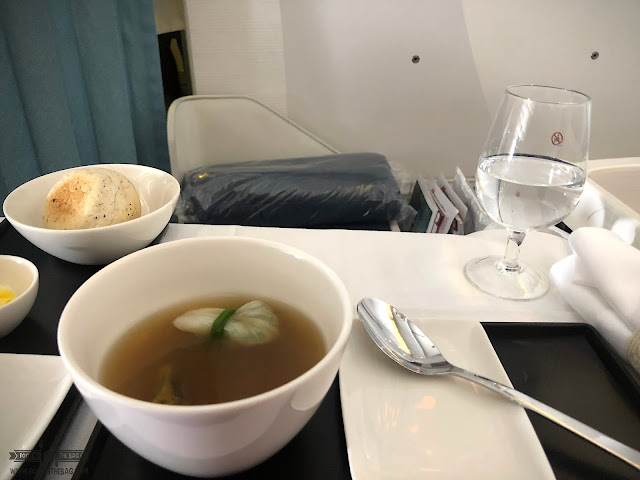 They then prepared my table by adding a cloth, utensils, and a bread plate. They then serve your appetizer. In this case, soup for me. They also show you a bread basket and let you choose your bread. During this time, they are preparing your chosen meal. I had a small glimpse into their work space and I saw that they had cue cards on how to plate them. 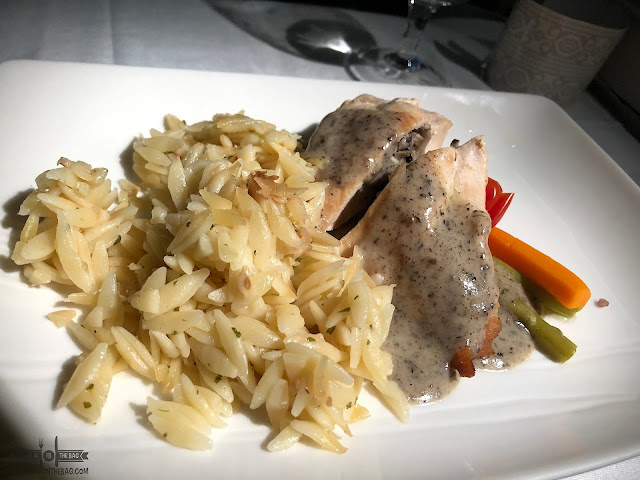 Unfortunately, I didn't know what happened to mine. In all honesty, I was still hungry since it was smaller portion to what I was used to in an airplane flight. Dessert wise, I asked for both options. I went for the cheesecake and the ice cream. Thankfully, both were pretty good. 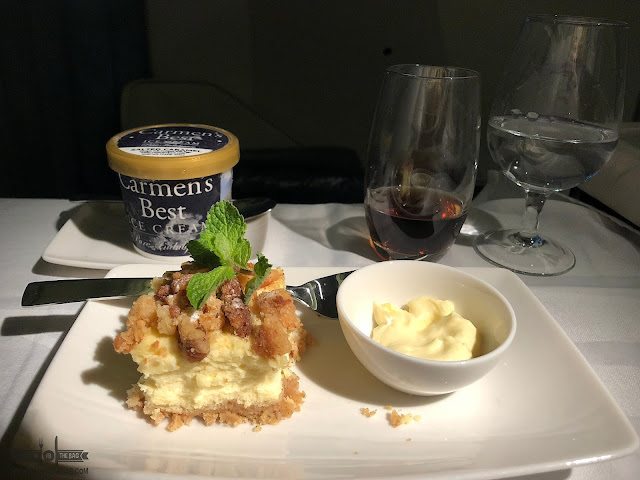 In the middle of the flight, I was still hungry. I asked for some snacks and they offered this cheese plate. Not bad. Also, they have chips and other sweets that they offer all through the flight. Walking around, I could see them on their work table available for anyone to pick on. 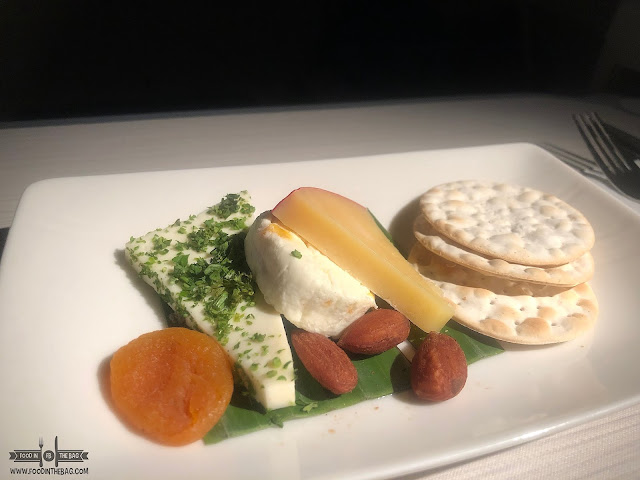 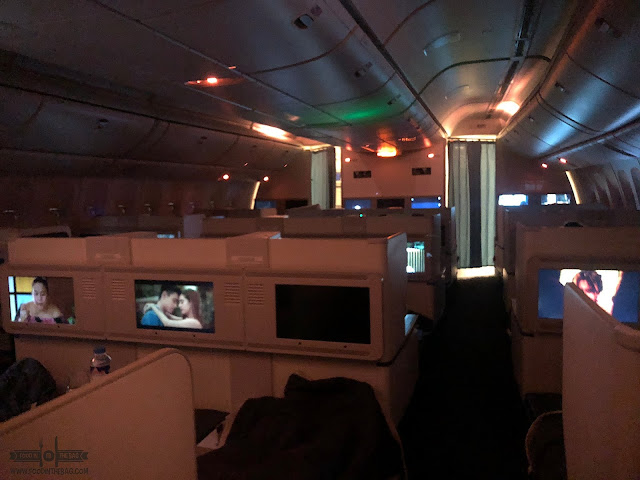 This was the view of the cabin during flight. As such, I would definitely recommend rows 3 or 4 next time around. The second meal would be served roughly 2 hours prior to landing. In hindsight, I should have asked for it earlier and just slept through the morning rush. The flight would have been a good experience if only my seatmate would be a bit more relaxed and quieter. Originally I had the two seats all to myself. Unfortunately, someone asked to move to the window seat and from there, I couldn't sleep right and that person made my flight experience worst. Hopefully, your experience would be better.

Disclaimer: Paid for my ticket. Wrote this based on my experience and opinions.
Tagged