ENDO SUSHI: A MUST TRY SUSHI PLACE IN OSAKA, JAPAN 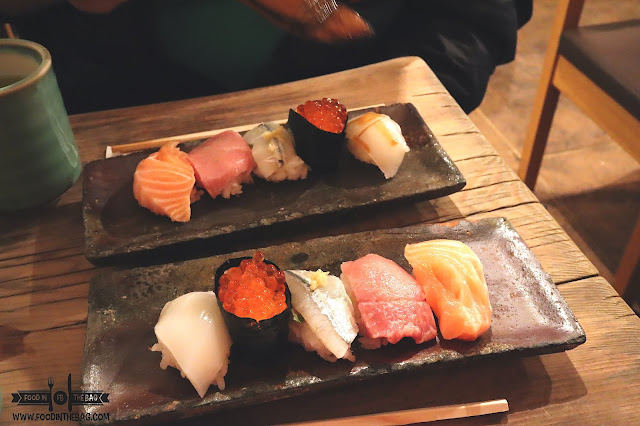 I will definitely not be able to live with myself If I can't have at least one decent meal whenever I visit Japan. I make it a point to have at least a meaningful dinner or in this case breakfast when I go to a different place. This led me to a very old sushi institution in Osaka. It's one of the  few places that struck me when I was researching about OSAKA. This would be ENDO SUSHI. 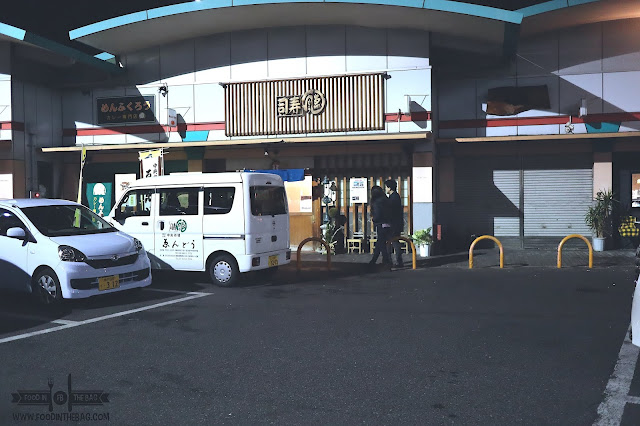 Located in the parking lot of a working fish market. ENDO SUSHI has been in the business for more than 113 years (since 1907). They have been in their OSAKA CENTRAL FISH MARKET LOCATION for more than 89 years right back when it opened in 1931. There is a lot of history and character for something like this to stand out and stay alive for many decades. Getting there was an adventure in itself. 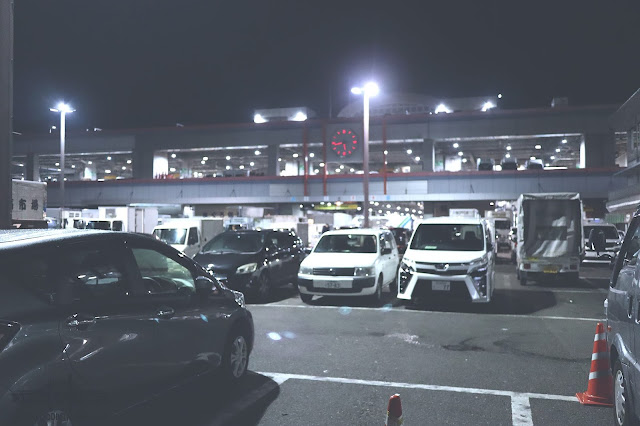 My brother and I had to wake up pretty early as the restaurant opens around 6am and closes around 2pm. We actually had an adventure getting there as we tried to go down and upward moving escalator, got left by the train, and even got lost in a parking lot. 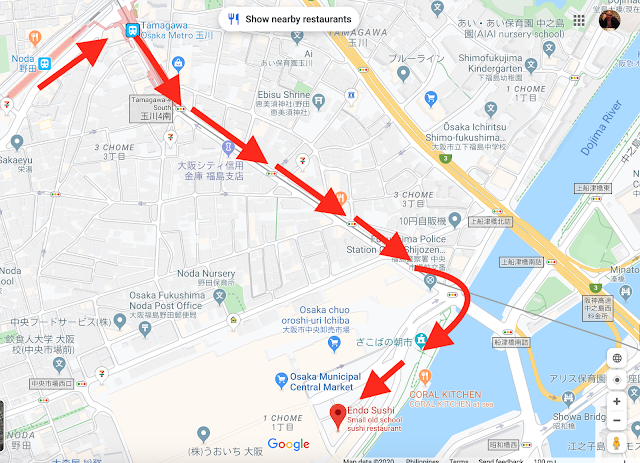 Getting to ENDO SUSHI'S original shop location is a bit of a walk from the nearest station. Roughly 1km away or 15 minutes, you can get there easily since it's all flat. Just get off the NODA station if riding via JR LOOP LINE. Go towards the south. Stay on the right side of the main street and cross the intersection just before reaching the river/bridge. There will be a pedestrian lane on your left towards the middle of the parking lot of the OSAKA CENTRAL FISH MARKET. Cross the pedxing and enter the parking lot. Continue walking in this parking lot and head towards the main building with the clock. You should see a couple of restaurants that are stand alone on the left side of the parking lot when facing the main buildings. That is where ENDO SUSHI is. 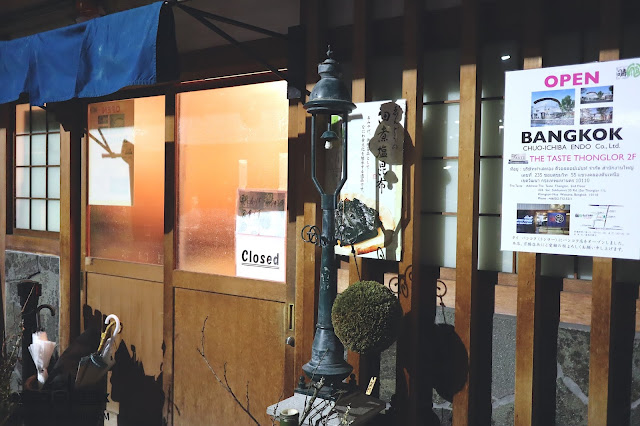 That day, they opened up at around 0615. Unsurprisingly, we found ourselves at the restaurant together with locals. We were the only foreigners. It was early but they already had a number of guests lining up. Thankfully, we were all accommodated. 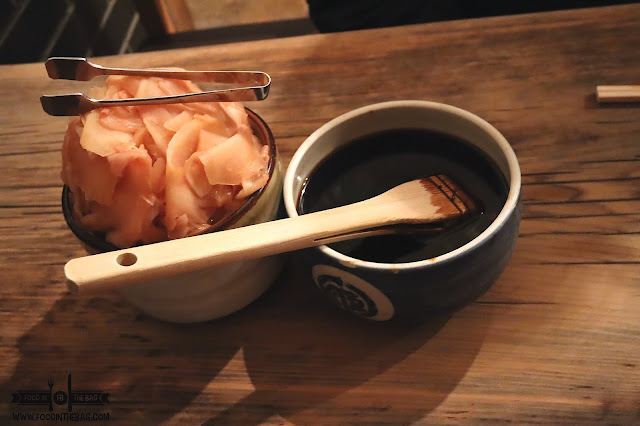 Once you enter, you are transported back in time. There are a number of memorabilia on the wall. You could see a traditional sushi counter as well. One thing to note about ENDO SUSHI is that they created the technique known as TSUKAMI-ZUSHI. Unlike nigiri-zushi, warm rice is loosely pressed together to make it. 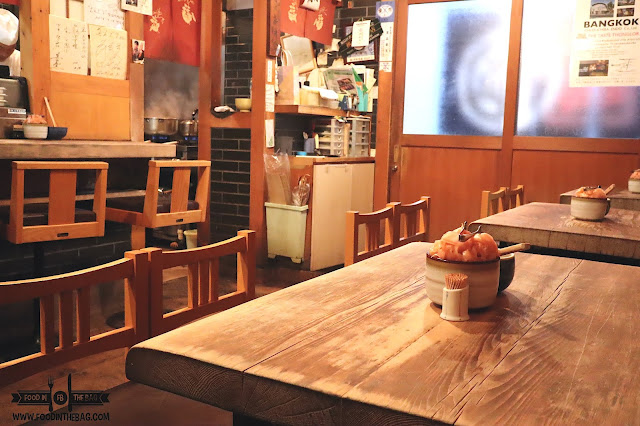 The tables are filled with ginger and soy sauce. In this restaurant, you brush the soy sauce onto your sushi. Don't forget about your sushi etiquette though. For foreigners, they have an english menu which is a big help. 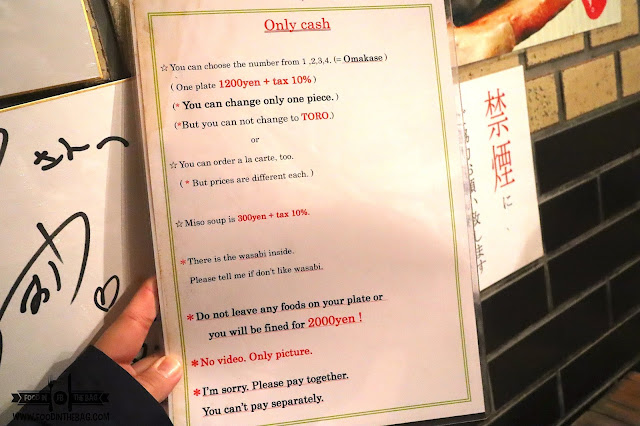 They have a couple of rules to follow. A plate of 5 pieces would amount to 1,320 yen. An order of miso soup would be 330 yen. If you know me well, you could easily tell that I had the entire course. Yes, I ordered everything from 1-4 together with the miso soup. 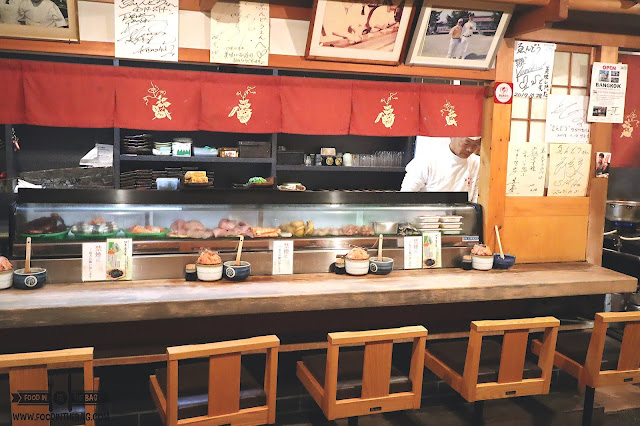 While waiting for our dishes, we were given our miso soup first. Drinking this would make your tummy warm. It would definitely prepare yourself for the meal ahead. This is no ordinary miso soup as clams were used as the base and it seemed to be a little more reddish than usual. 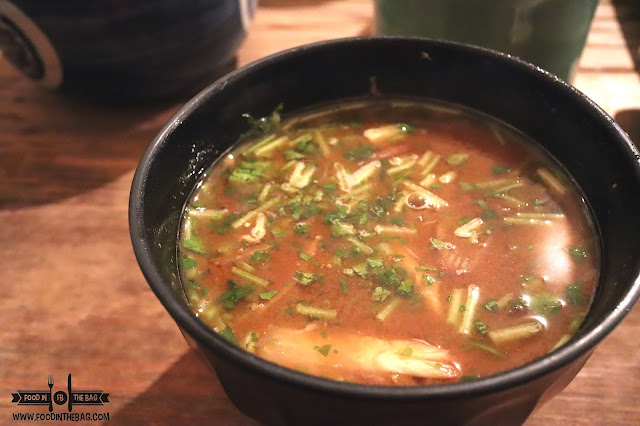 For the first plate, we had the L-R: ANAGO (sea water eel), UNI (sea urchin), TAI (sea brean), TORO (Fatty Tuna), Hamachi (yellow tail.). My brother and I both started with the ANAGO. If you had been there and seen both our faces you would laugh at us. We looked as if we had just had an foodgasm right there and then. The ANAGO was sweet but had a delicate texture. It was something that was meant to be. The uni was fresh and perfect. The TORO was just amazing. It was extremely fatty. 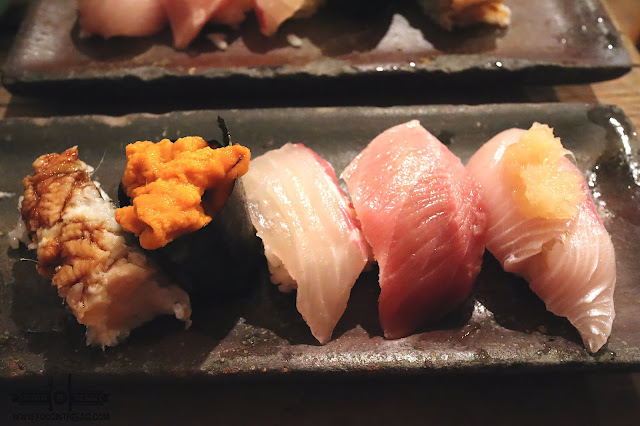 For the second plate,  L-R KANI (boiled crab), AKAGAI (Ark Shell), HOTATE-BASHIRA (Scallop), TORO, TACHIUO (Hairtail). Please forgive me as I forgot to take a photo of the crab. Let me just assure you that it isn't fake crab. Rather, they used real crab meat from their arms and legs. It was sweet! The Ark shell was somewhat different. The scallop was plump! The Hairtail was just incredible. It was torched and had a smokey flavor. 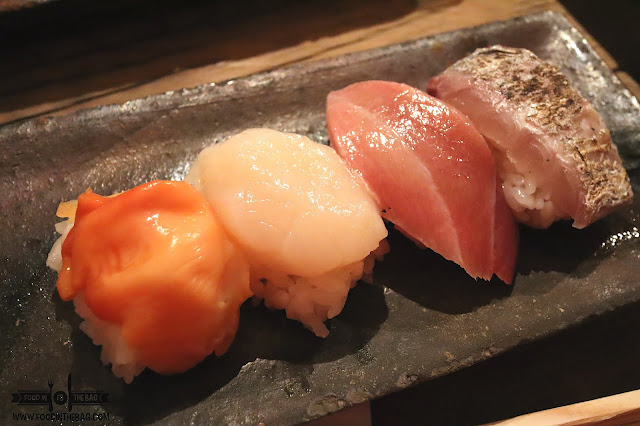 For the 3rd plate, L-R TAMAGO (egg), EBI (Shrimp), AWABI (abalone), TEKKA (tuna roll), TAKO (octapus). This has got to be the beginner plate. If you aren't as adventurous as your other friends or family members when it comes to sushi, this might be your intro plate. The tamago was different. I was expecting it to be sweet. Rather it was sweet but had a fermented taste. It was different. The Shrimp was sweet as heck. The abalone was delicious. The tuna was simple. The octapus had a sweet flavor as well. 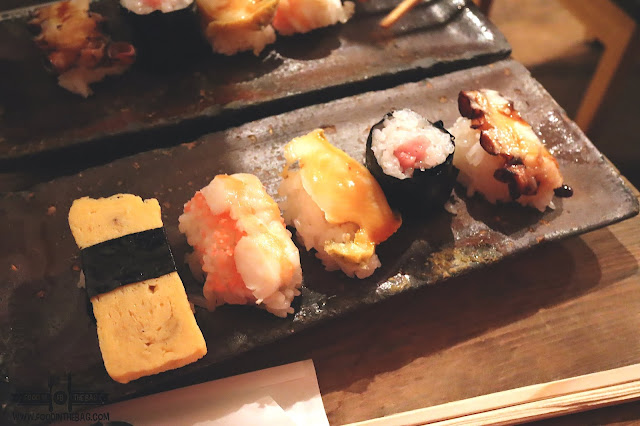 For the fourth plate, we had the L-R IKA (calamari), IKURA (salmon roe), SAYORI (halfbeak), TORO, SAKE (salmon). I was expecting for the calamari to be rubbery but it wasn't. Instead, you could cut it with each bite. The ikura was just splendid. Each roe would pop in your mouth. The salmon was fresh as it could ever be. My goodness. 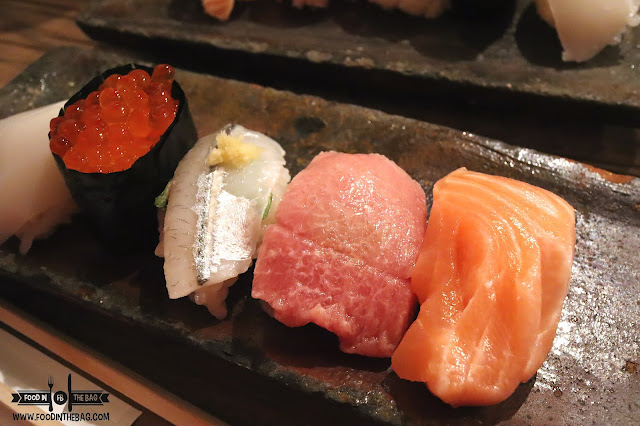 If it was me, I would definitely go back for the ANAGO, SALMON, KANI, UNI, TORO and TACHIUO. These made an impression with me. 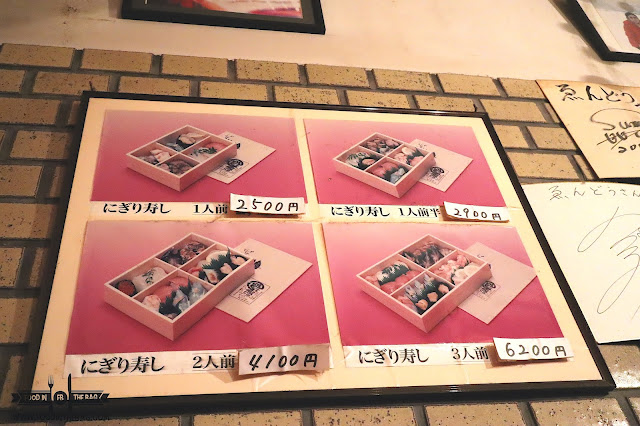 Believe it or not, you could also order take out from them. Although it might be a bit pricey, I guess if you're willing to share the wealth then go for it. 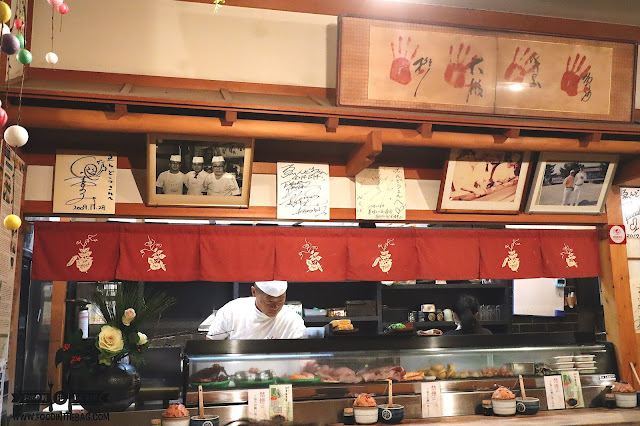 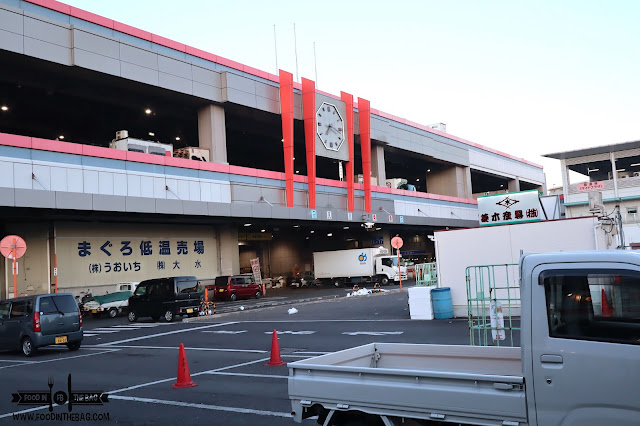 We finished our meal after almost an hour of eating. It was delicious but wasn't as expensive as one would think compared to other michelin restaurants. The quality of the seafood was spot on. Since they get their seafood right there in the market, you can definitely be assured of the freshness. It was actually surprising to see that the chefs of the restaurants were wearing rubber boots. I guess they also participated in the 0415 tuna auction in the market. Definitely worth a visit. 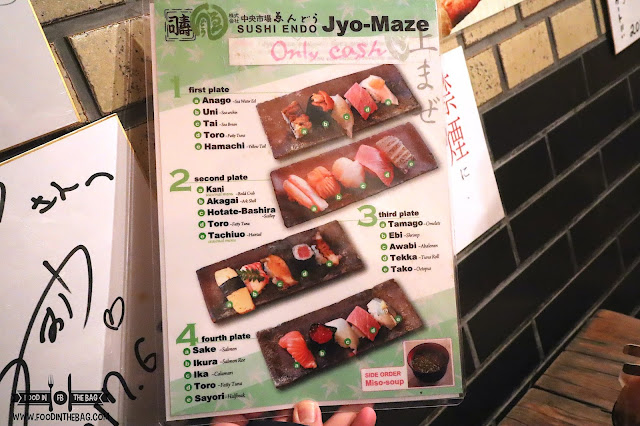 They also have another location in a mall/train station in Osaka and one in Bangkok.


Disclaimer:wrote this based on my opinions. Paid for our meals.
Tagged