CATCH in MAKATI: SEAFOOD and a Giveaway. 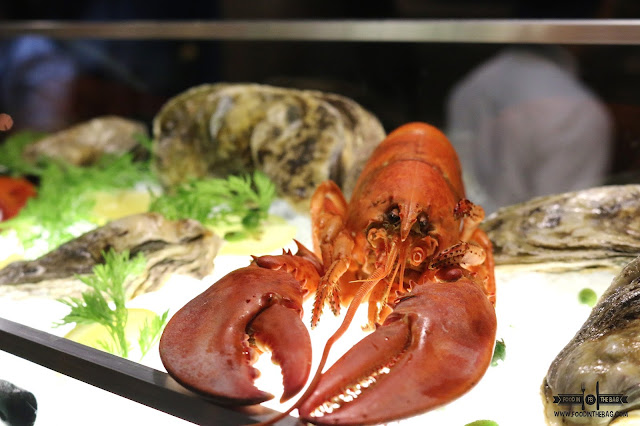 Going to a restaurant a little early before its opening time would allow you to check out the place before anyone else. At CATCH in MAKATI, I was able to do just that. Specializing in Fresh Seafood, CATCH opened just this January 2016. Located in the concrete jungle, I said yes to the invite because I was already in the area.
The call time was at 6pm which would normally be around 7pm by Philippine standards something I should take note of next time. We were seated on a table with sea shells as a design. Pretty and cool. Everything was simple and straight forward. That was my initial impression. 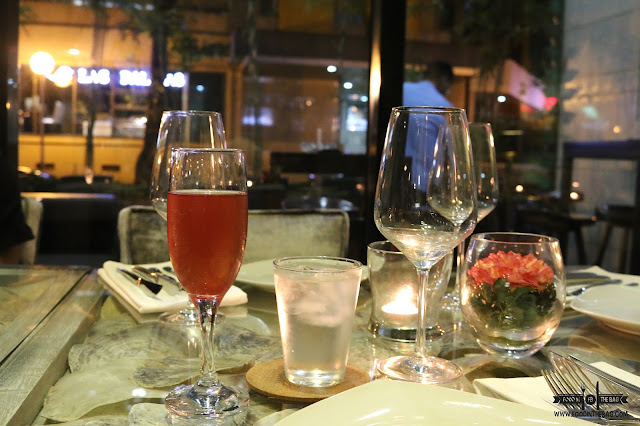 I actually didn't know what to expect. More so, I didn't know that this used to be LULU. Managed by the same guys behind Smith, Poulet Manille, Hooch, and Ebeneezer's , I had high expectations. 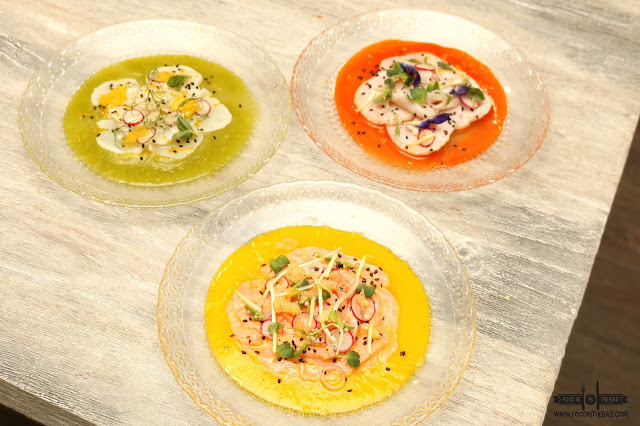 To start things off, a mix of ceviche were placed in front of us. Ceviche is usually fresh fish cooked in a vinegar or citrus juices that infuses its flavor in the fish's meat. It could be Mahi-Mahi or Norwegian King Salmon or Queen Scallops. Basically having the sea's flavor come out of the food.
Here, my top pick though would have to be the Kinilaw. Kinilaw is basically your Filipino Version of a ceviche.Their version had a more familiar taste like the ones they make in the province. Having a beautiful presentation also makes it an impressive dish. 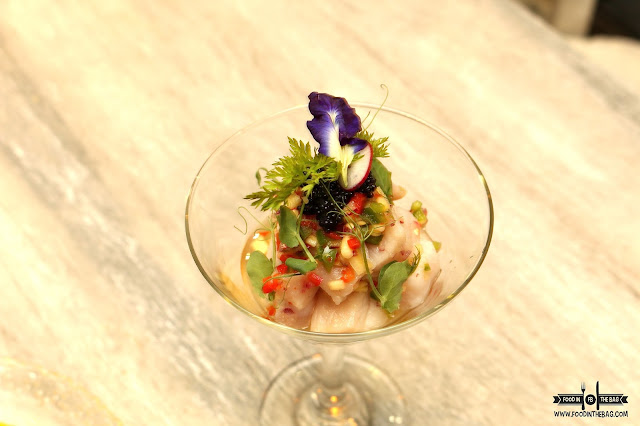 Since as I mentioned, they also handle HOOCH, it would be foolish for you not to order one or two drinks from the bar. 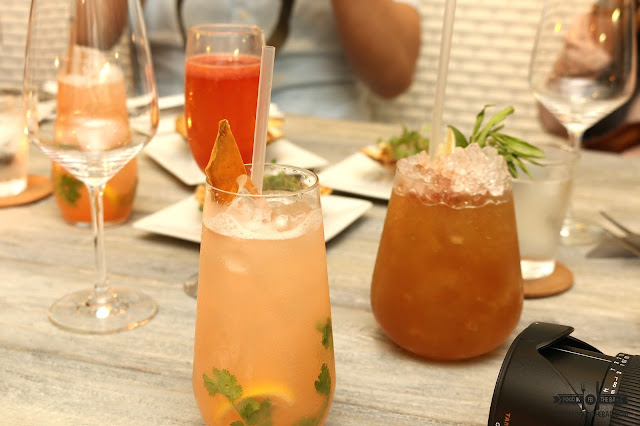 They will also be coming up with a few more signature drinks in the coming weeks. Honestly, most of the drinks were a bit too strong for my taste but the flavor of the chocnut infused cocktail is pretty much solid. 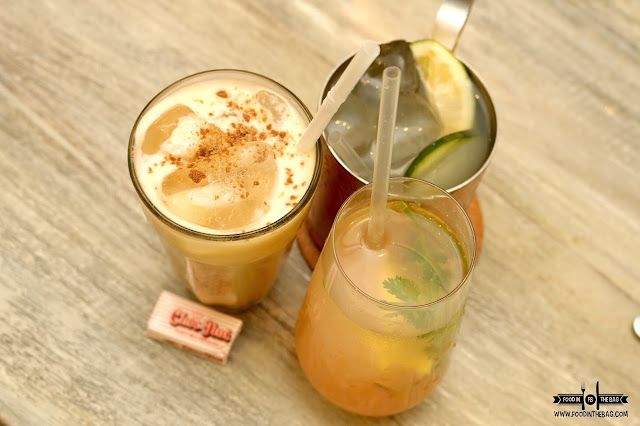 Now let me talk about service. This could either make or break a restaurant. Whether it is a fast food chain or a fine dining one. I have to say, I was disappointed on how the staff handled it. Not the management mind you, they were pushing and asking us for whatever we needed and want but I guess the staff needed more training and time to improve, since they just opened a few weeks ago. I didn't want to make a big fuss about it but it seemed they had a few boo-boo's. Not once, not twice but three times. But, I have to give it to the owners as they tried to fix and make everything right and kept on checking up on us. Given that we were just invited guests, I didn't want to make it known but I guess it is one aspect that they could improve on.
Say for example the DUO of OYSTERS. Flown in from Caticlan and cultured by a French seafood specialist, one is baked with cheese and other served fresh. My seatmate had asked a particular server if this plate would be served individually. The server said that it was for sharing. Thinking so, my seatmate had said that we should just share it even if everyone in the group had a plate each. I just advised him to get the entire plate. 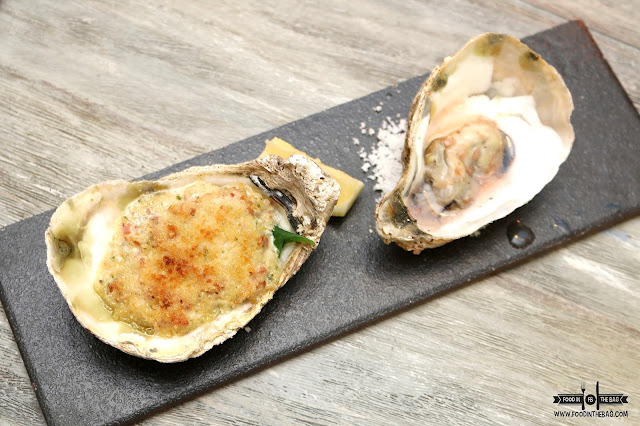 My other seatmate saw the fuzz and had asked for another plate for me. It did come after the next entree was served, but I decided to send it over to other ones that arrived late and were not able to try it. Not really something but looking back, I guess counter checking the number of orders versus the number of diners would be a great plus. Also, a simple count check would suffice.

According to my companions the BAKED SCALLOPS was to die for. Baked Queen Scallops in Japanese sauce was the most raved about dish the entire night. I can't really say what my opinion of it was because this was the second boo-boo. I didn't get one. I know I should have requested and advised the server about it but I didn't want to sound like someone asking for alms. That and I didn't know if they were going to serve more. In all honesty, it was an awkward situation. Things like this I really try to avoid. 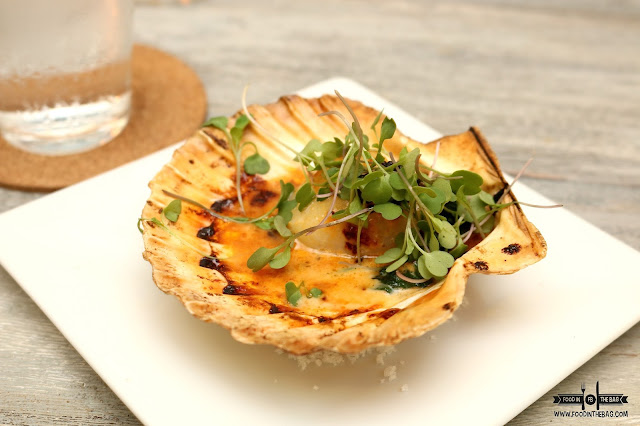 The FRENCH MOULLE FRITES was definitely the dish of the night for me. After skipping the last two dishes, this made an impression. Imported mussels cooked in a creamy wine based sauce. If we had bread, the soupy sauce would be the perfect dip for it. 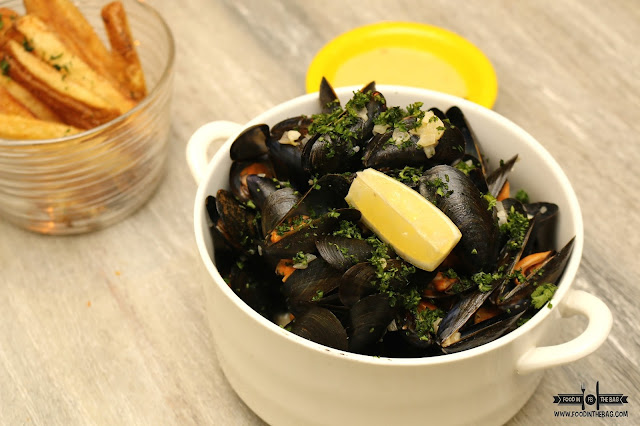 If you are into tempura, you may want to try their LOBSTER TEMPURA. It's basically a mix of shrimps and lobsters. 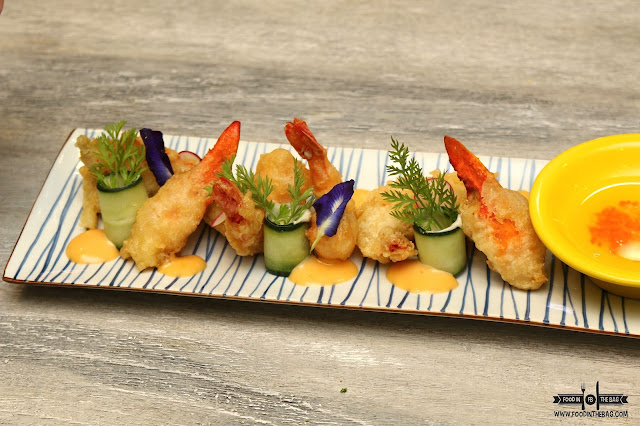 Cooked in a light batter, the lobster pieces are kept moist. Something the kids would enjoy. 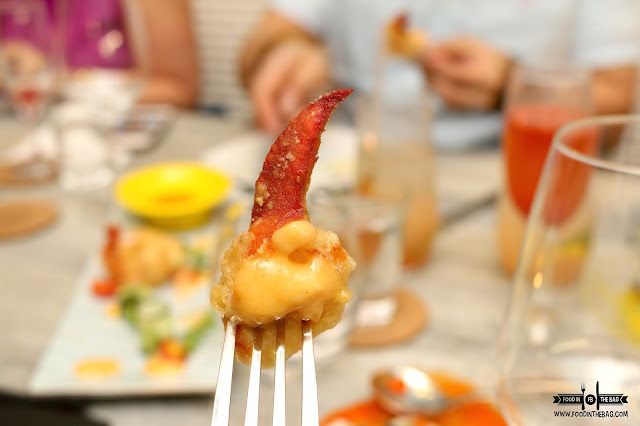 A dish that was highly recommended was the LOBSTER PO BOI. 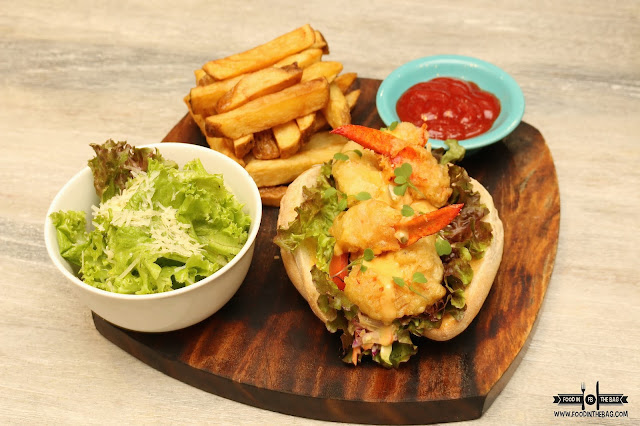 Lobster claws were placed in a bun baked by the kitchen. It had a crunch outside but was fluffy inside. Pretty good stuff. Different herbs and spices made it a little spicy but was pretty good. Also, the hand cut fries was solid. 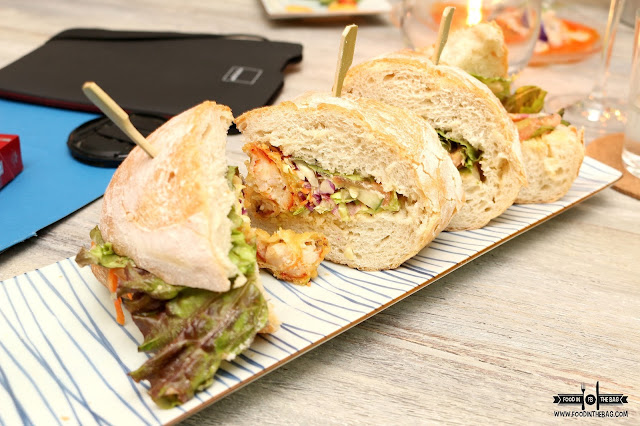 The next boo-boo was when a friend of mine asked for a glass of red wine before the next dish was served. Since the SURF AND TURF was up next, red wine would be the ideal partner for the steak. The RIB EYE worked pretty well with the scallops and the shrimps. It was cooked medium and was well rested. Tender and delicious. Unfortunately, we had already finished the dish and the drink was no where in sight. 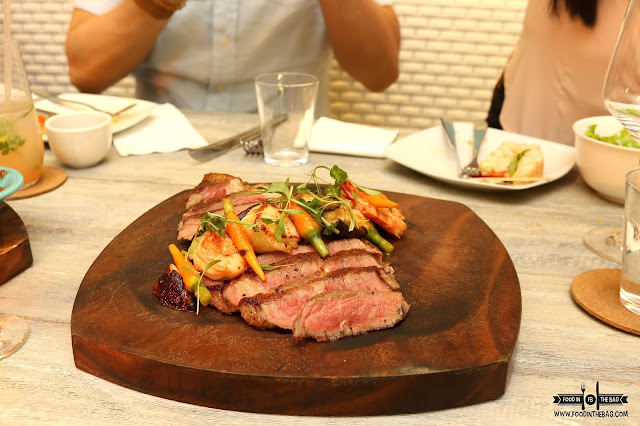 I was pleasantly surprised with the TURBOT. Air flown French seafood in lemon, capers, parsley, and other herbs. Apparently, this is a popular fish among the French. The mixed herbs blended well with the meat. This particular dish is actually by special request since they always almost get low on stock as a lot of diners request for this. Remember to try this and call in advance to reserve. It is pretty good. 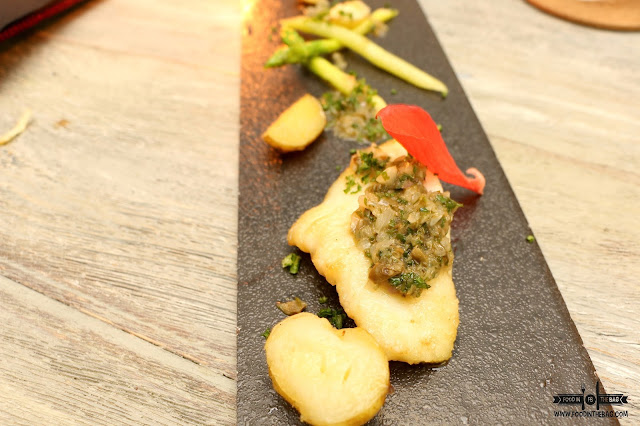 To end the night, CHEESECAKE was served. Smooth, creamy and not too heavy. 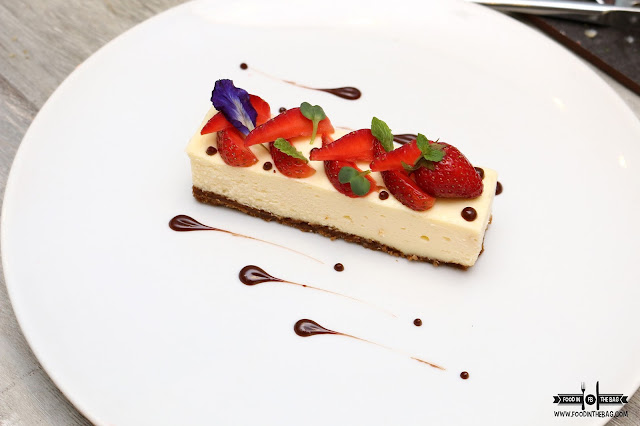 Over-all experience is a great deal breaker for me. More than the flavors and the price tag, sometimes it is how we were served and the company that makes the night. It maybe because I'm a bit spoiled when it comes to other places that I have been to or maybe I was just off that night. But that is what I experienced and saw. In hindsight maybe I should have informed them of what happened right there and then but then again, I don't want to be known as the nitpicker of the group.
If you were in my shoes what would you have done?
Even with the mix ups, I'm not pushing or taking CATCH out of the food equation because the kitchen did a masterful job of creating seafood dishes that aren't usually seen in the Metro. Maybe a bit more training and familiarity with the menu would help the staff give the diners the perfect experience. Give them a couple of months and I believe they could do a great job. For now, best to go during the weekdays. Avoid peak and rush hour. Parking and traffic could be a problem too.
and now time for the giveaway:

The First 5 steps are mandatory.
If you want more chances, please feel free to finish everything and come back daily to get more raffle entries.
Please Follow the instructions properly. Not being able to follow them would result in disqualification. I would need to verify once I pick you that you have done them all. Contest ends on Feb 17,2016. Also, please be sure that you will be able to use the GC. 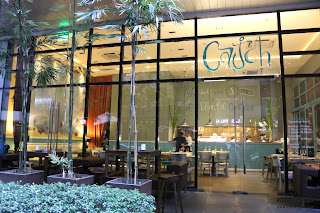 Disclaimer: Wrote this based on my experience. I was invited to this event.

I am giving away my GC to CATCH worth 2,000Php to one lucky winner. Food In The Bag reserves the right to pick and have a final say on the contest. All decisions are final. Participants may be disqualified with or without prior notice. Rule changes may occur with or without announcements. By joining, participants accepts the rules of this contest and the decision.
Tagged