When we arrived back from Bangkok, our ride wasn't there to greet us. Apparently, EDSA and C-5 were  huge parking lots.

I figured since my dad and our driver were already 2 hours on the road, we should just meet up somewhere in the middle so that we could eat and relax. Rather than just picking us up then traveling through the freaking traffic again. 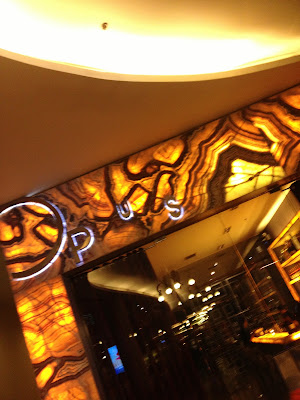 Since they were stuck somewhere in the Fort, I suggest we just meet up in Resorts World since it is the most logical meeting place. The only problem now would be finding a place to eat. Since I was with my family and they rarely go out at night, we chose OPUS.


Of course we were greeted with such luxury and attentive service.

To start off, we were told that it was happy hour and drinks were buy 1 take 1. (The inside of me jumps with joy).

I ordered some Opus Caipiroska. It was strawberries with lemon plus absolute vanilla and balsamic vinegar plus some cracked black pepper. I know it sounded weird but believe me it was 1 awesome drink. It was sour and has no hint of that alcohol.

Picking from the menu, we all ordered set courses since we were too tired to choose. We went with the bahala na system. Looking back, we should have ordered other things because the food became monotonous with just a few varieties.


No dessert here. As I said before their dessert needed a make-up. The food were hits and misses. I think I would just come back for the cocktails next time.