Last October, I found myself, dragging my body out of bed really early in the morning. I was going to Resorts World Manila to compete in Star Movies' Movie Triathlon Contest. The call time was 6 am. So, I left my house around 5am. I arrived around 5:45am only to find out that registration starts at 7am and the contest proper will start at 8am. Arghhh!!!!
At first, I was anxious and didn't know what will happen. From what I researched, the first two contests were a marathon. This was when a lot of awesome movies would be shown and one wouldn't be allowed to move, stand up, stretch, sleep, take a washroom break, and talk. What was different this year? I soon found out.

To enter the contest, one should send e-mails when one sees a popcorn tumbler on Star Movies. If you are part of the lucky few, you are chosen and invited to the contest. Luckily, I got in. 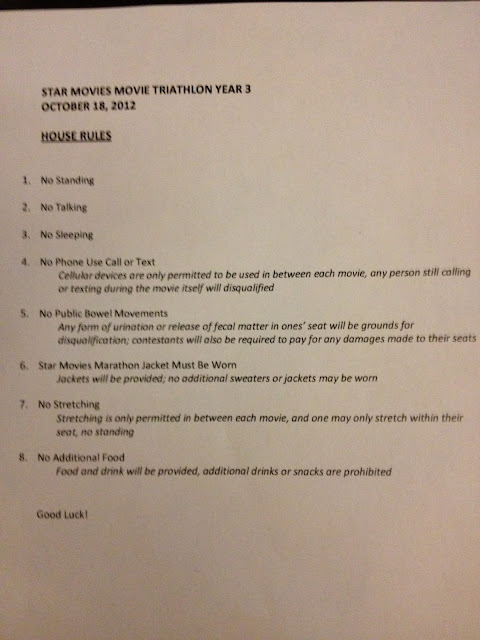 We were given house rules.The bouncers were a little strict. The no phone rule was enforced all through out (except for than 1 minute given by an emcee after the 4th movie).
We were asked to wear the official jacket. (I had manong bouncer help me get into one because it was sized XL). Thankfully, we stretched it out and BOOM! I fit in. No one was allowed to wear additional clothing. 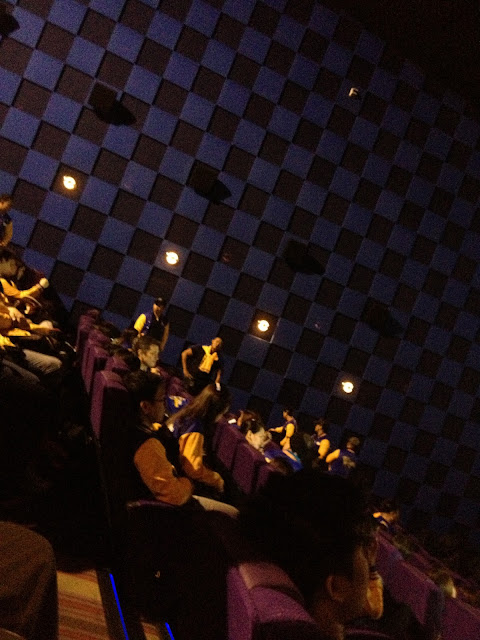 We were served all the food and drinks and snacks we wanted.
The movies shown were different from the previous years. Before, they had blockbusters. This year, they presented something different. They showed us black and white films. Some of the movies were even from the 50's,60's and 70's. It was pure torture. We had to endure not so interesting movies. Maybe, they were great back in the day. Compared to what we watch now, they weren't that awesome. The movies were dragging and long. A lot of us got sleepy and were ejected. Thankfully, I was holding up on my own.

After lunch, an emcee came up and asked us all to stand up and stretch. (YES!) She said we had to do something different. Enter a gym instructor (SHIT!). We were asked to do circuit training. This was where it became a triathlon. Yes, I wasn't able to follow and got dropped out. Being able not to move for around 6 hours was a disaster. Suddenly, they would ask us to do jumping jacks, jog in place, shuffle, and squats. Repeat continuously, then hold. Heck, I was wearing a polo, khaki pants, and dress shoes. It was a difficult experience especially since I wasn't in a sports attire (I had to hold my pants to keep it from falling down). Even some of the smaller guys got out because it was terribly hard.

I was able to endure the 4 movies. I was actually proud. The contestants were also asked to do yoga, treadmills, and stationary bikes. I found out later on that the triathlon ended close to midnight. The winners decided to split the prize all evenly.

BTW, they gave us a loot bag too.

Aside from these, we were given complimentary passes to a gym and a huge lipton tea box. I later found out that they also gave away socks but I never got any.

The loot bag was actually worth the trip. So, I was happy. The cellphone alone costs around 4-5k (according to my CP suki). 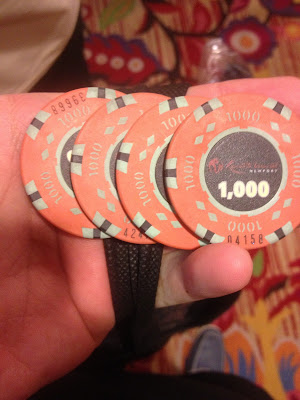 Plus.....I got lucky in the casino and went home a few thousand richer (yes better than the prize money that the winners each got! LOL).
Tagged