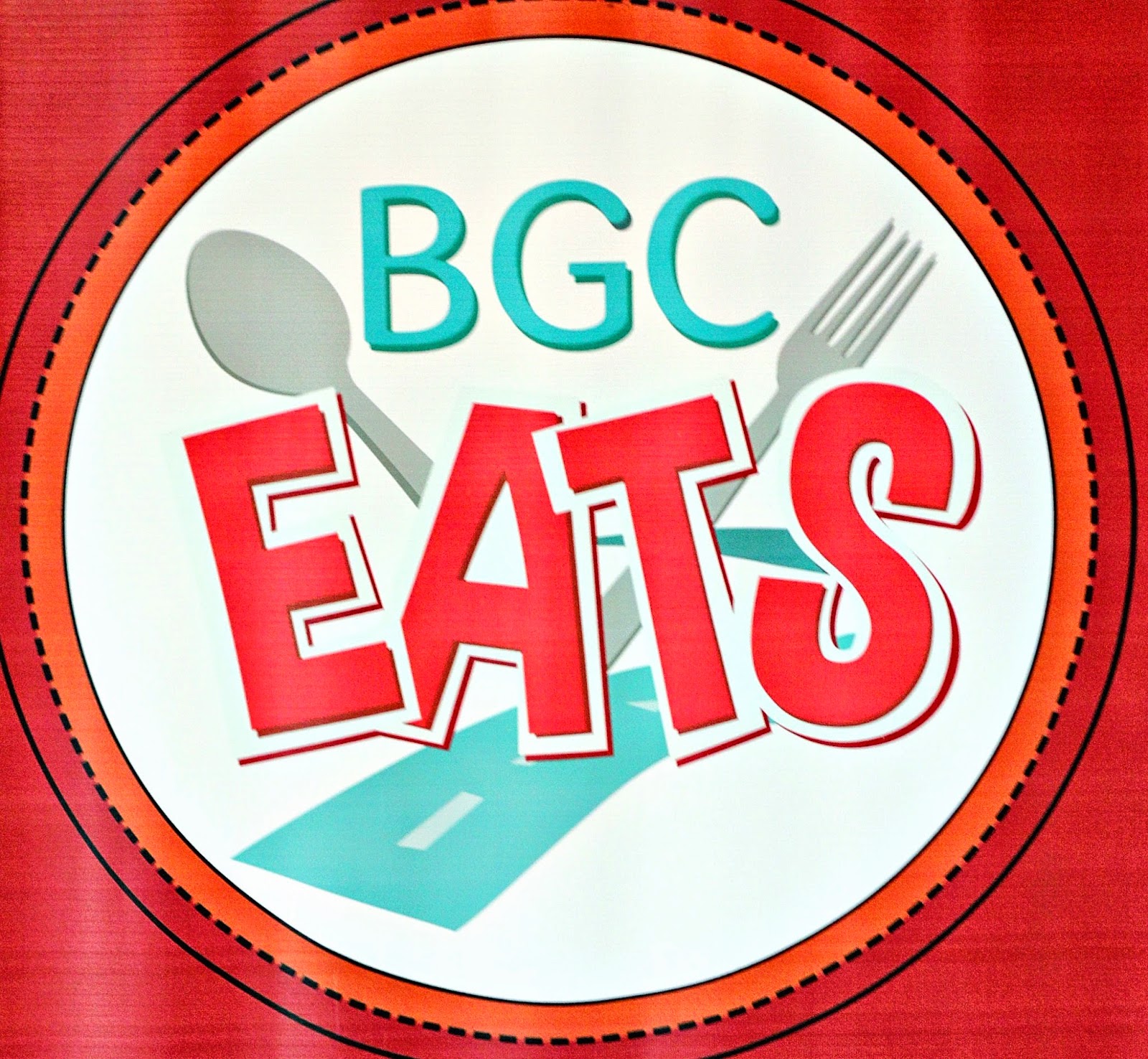 Cancel here, traffic everywhere, nursing a bad tummy, having some car schedule problems and coming from an awesome Pizza Fest  at Munchtown (post coming soon).....
These and more didn't stop me from going to the Fort.

For a second consecutive Saturday (last week's version CLICK HERE), I had the opportunity to check out BGC EATS 2014 Drinking Edition. I went with C as she didn't want me drinking alone. The theme was drink and food pairing. I was supposed to give away the tickets but circumstances led to this pleasant surprise. 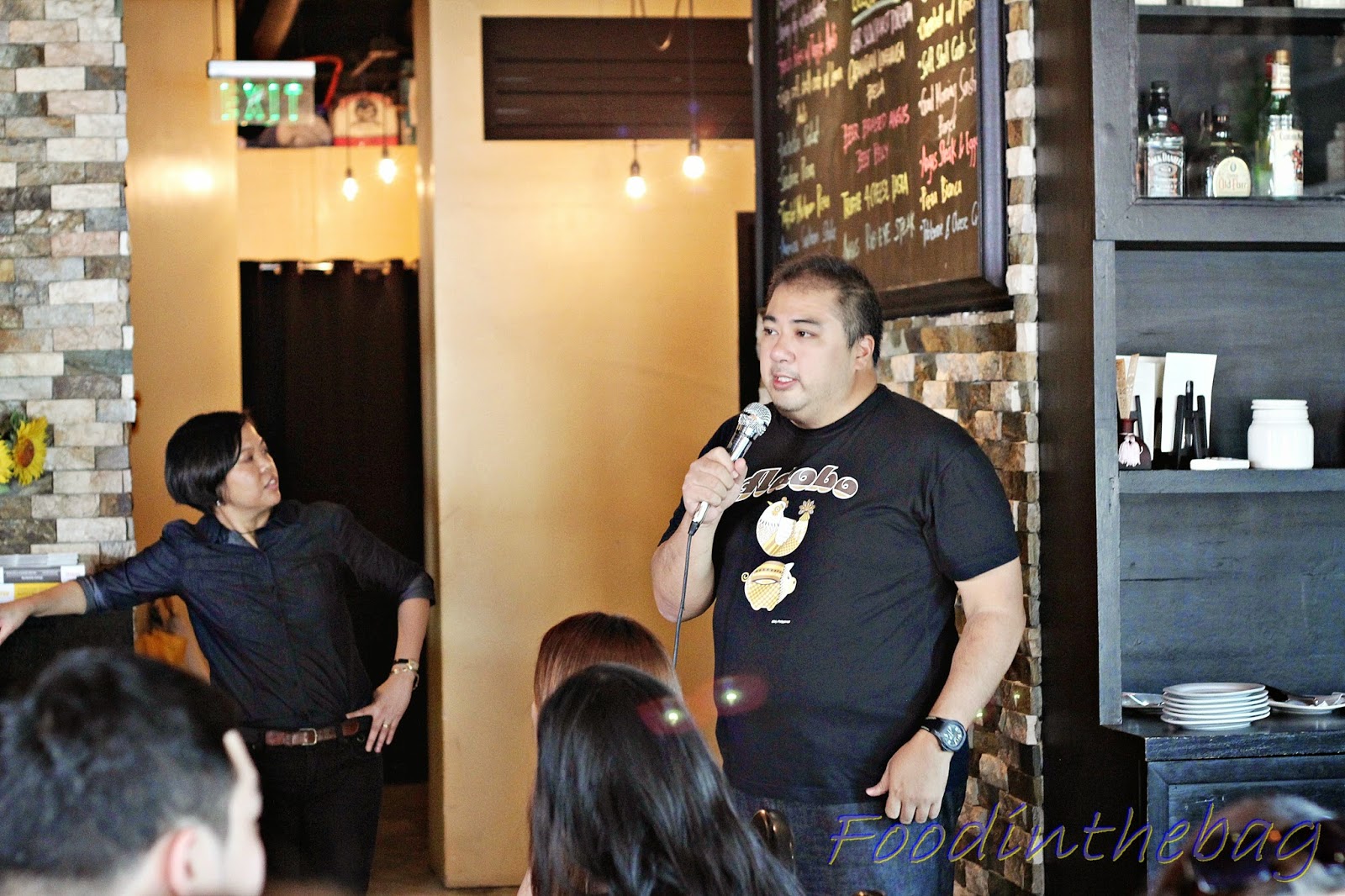 For this Saturday afternoon, it was BEL CASTRO.. Professor extraordinaire from ENDERUN, who was manning the mic with JJ YULO. 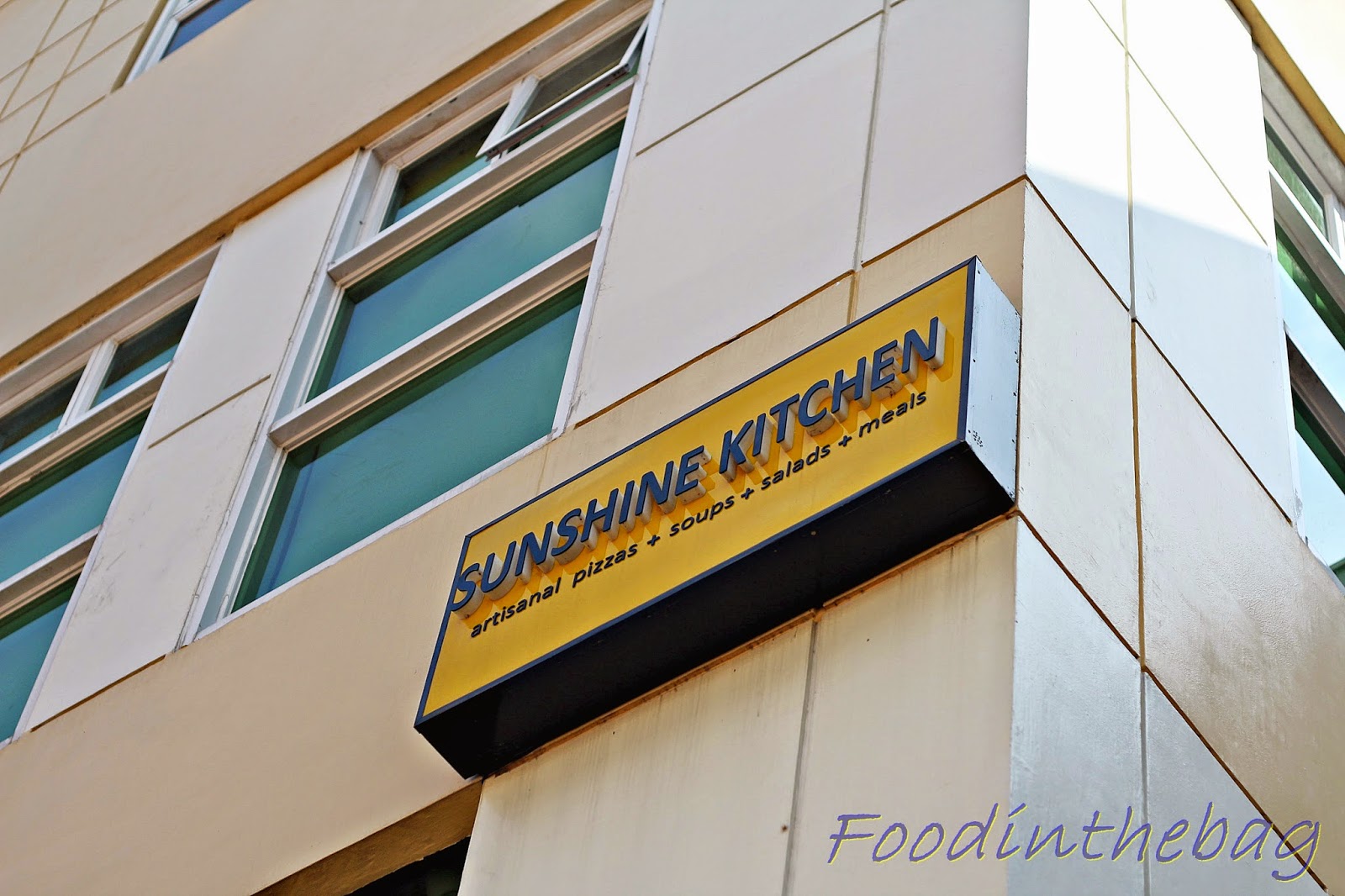 Riding the bus, we were led to the Fort Strip.
1st up was the SUNSHINE KITCHEN


Here, BC explained how the flavor is enhanced through the drinks we get. Like if we have something a little salty to eat and has something sweet to drink. On individual intake the taste stay the same but if they are combined, the mind plays its trick and makes the flavor more intense. 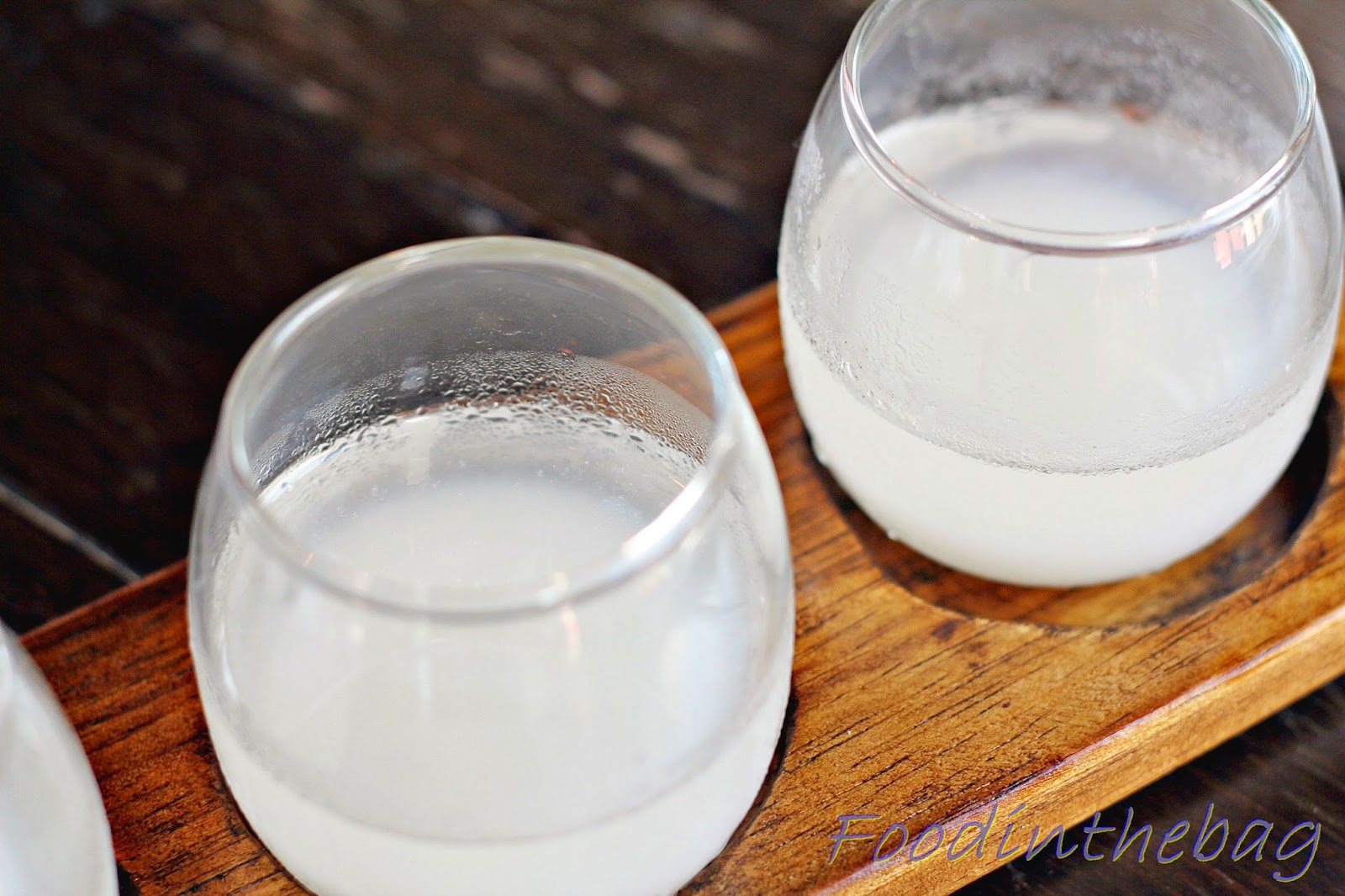 On its own, you get the flavor of the alcohol but when you combined it with next dish, you tend to taste the Guyabano more. The salty flavor masked the alcohol.
CRAB AND CHEESE CROQUETTES with TARTAR SAUCE 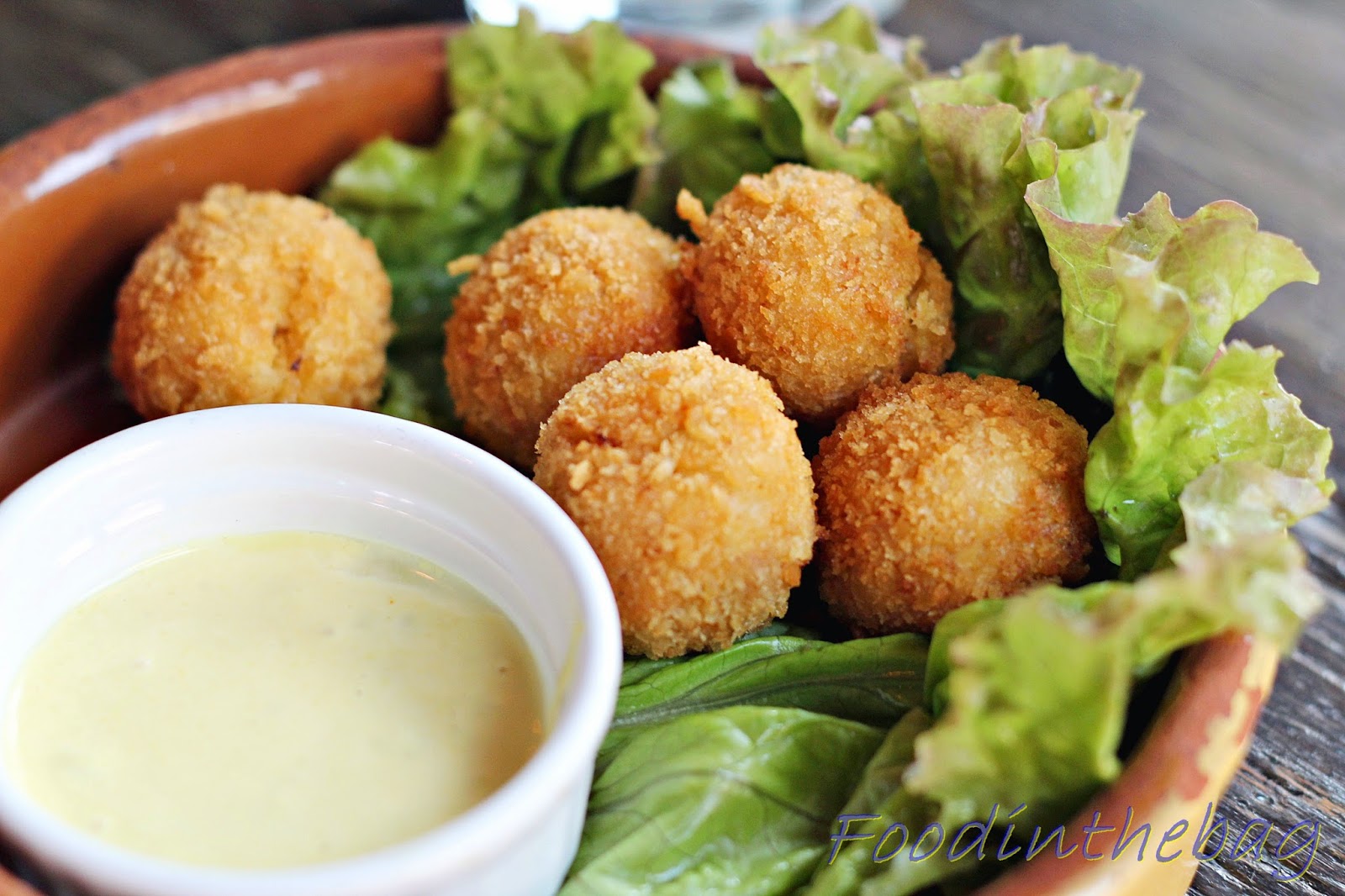 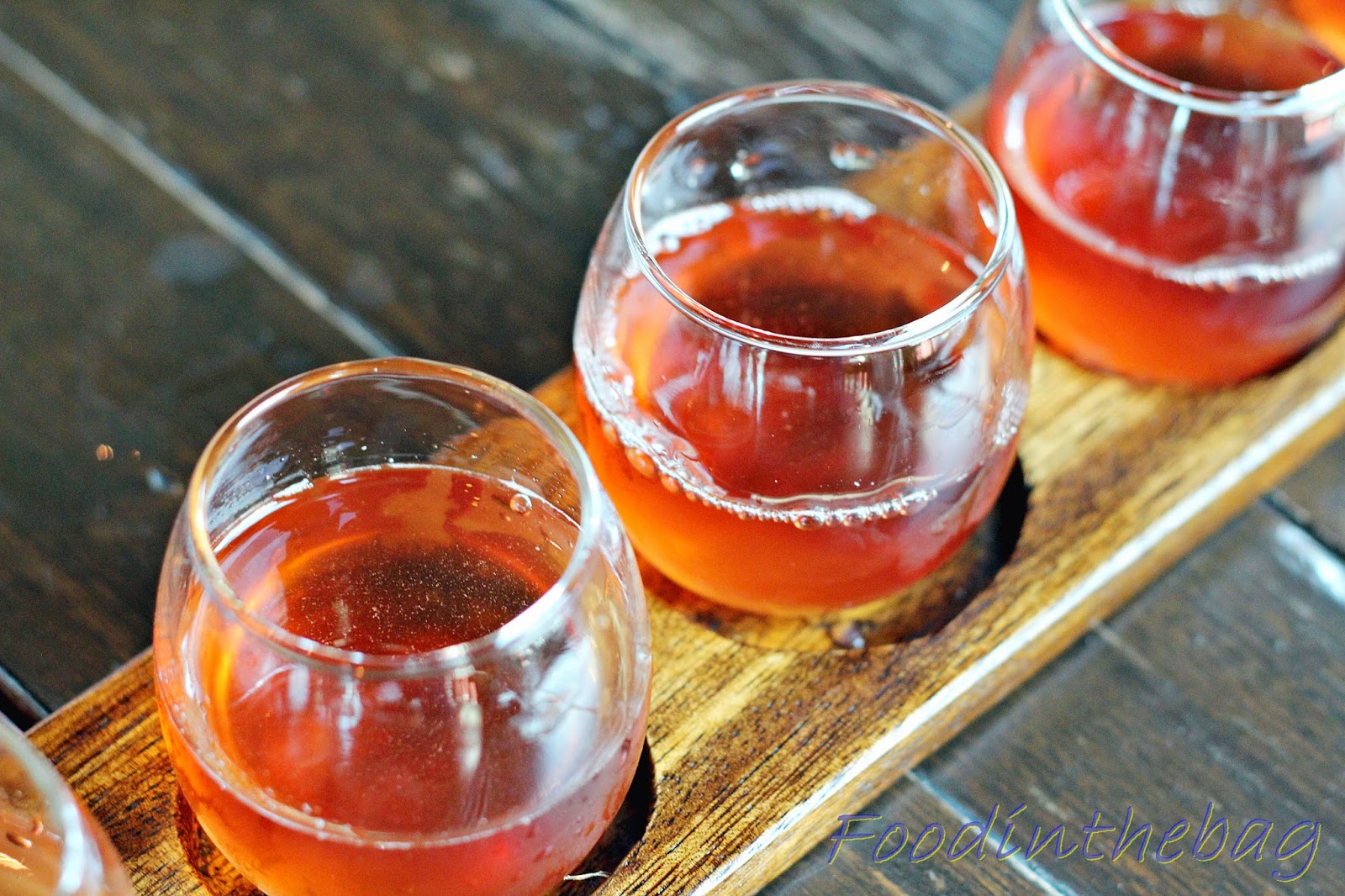 This drink was a crowd favorite. Everybody loved it even without the pairing dish. C drank it in 1 quick gulp and actually finished mine too.

Something new on their menu, CHICKEN and MUSHROOM VOL AU VENT was creamy. Small but perfectly all right with the pacing. 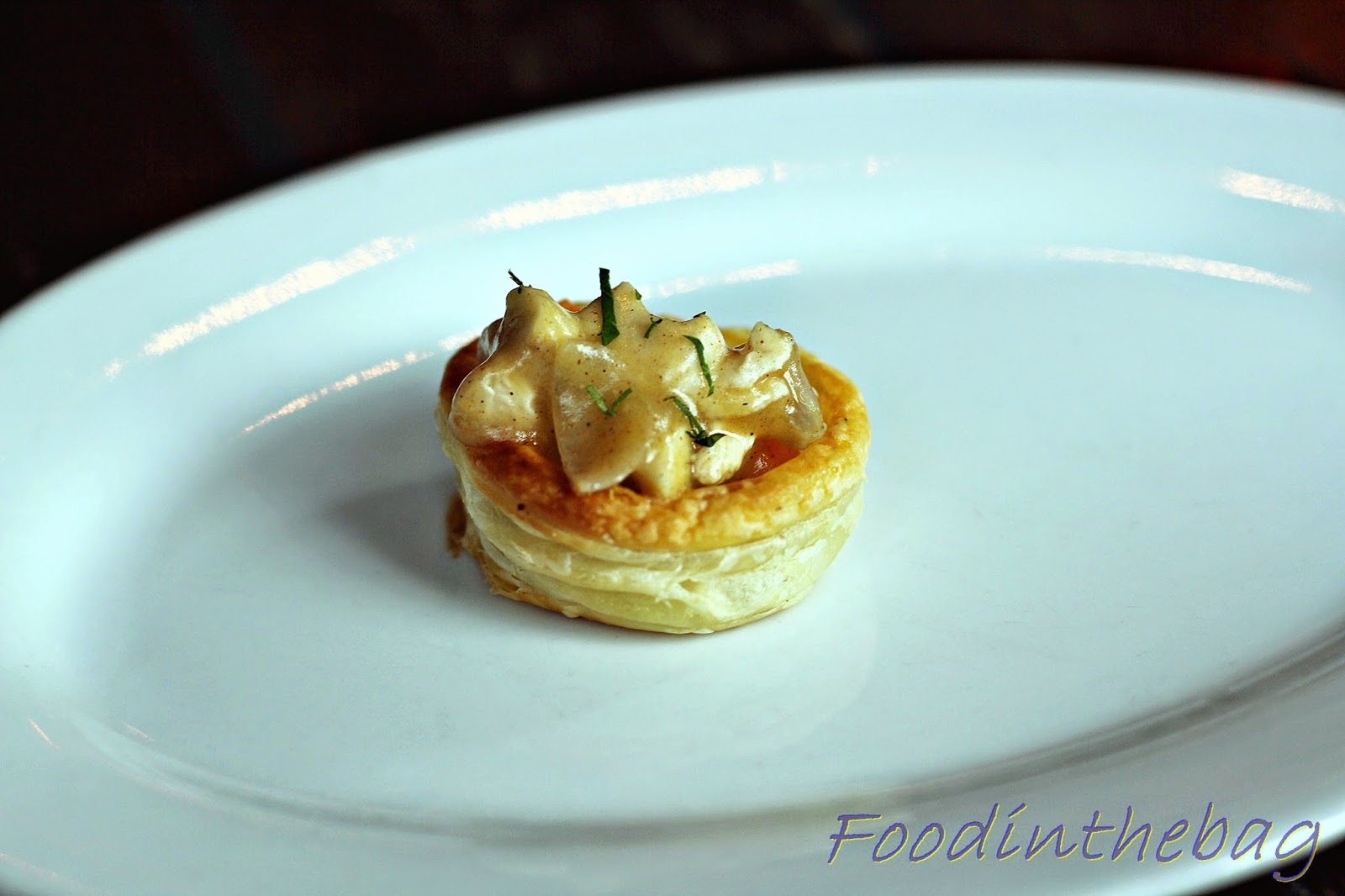 THE SUN ALSO RISES was next. It was made with maker's mark bourbon, strong Earl Grey Tea combined with fresh cantaloupe I am not really into bourbon but i did liked the pizza though.
CRAB and SHRIMP PIZZA with ARTICHOKES and ANCHOVY 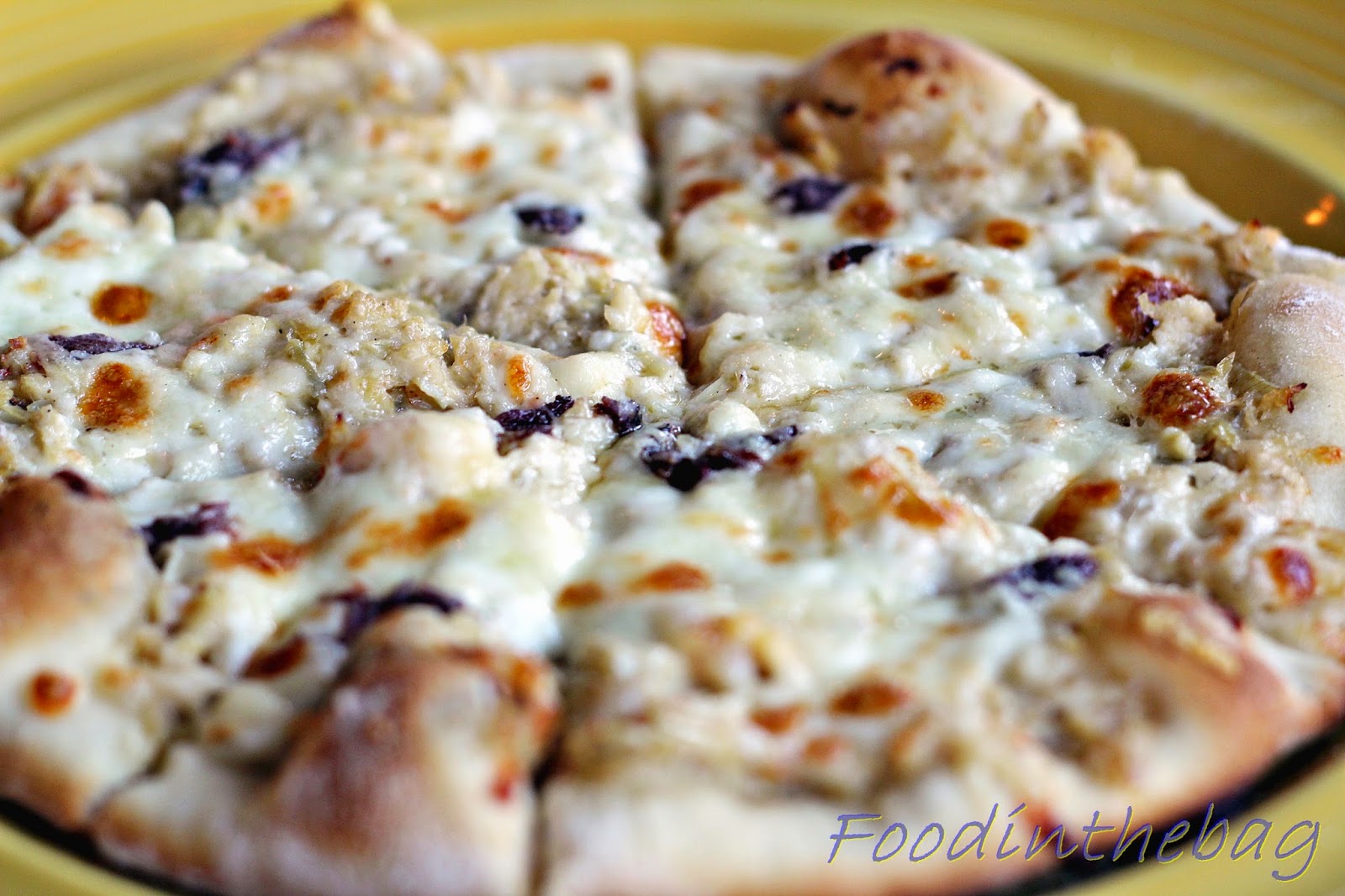 Not too thick and not too thin.
OUTLAW. Ripe watermelon jacked up with spicy red chilies and blasted with 100% Agave 1800 Reposado Tequlia. 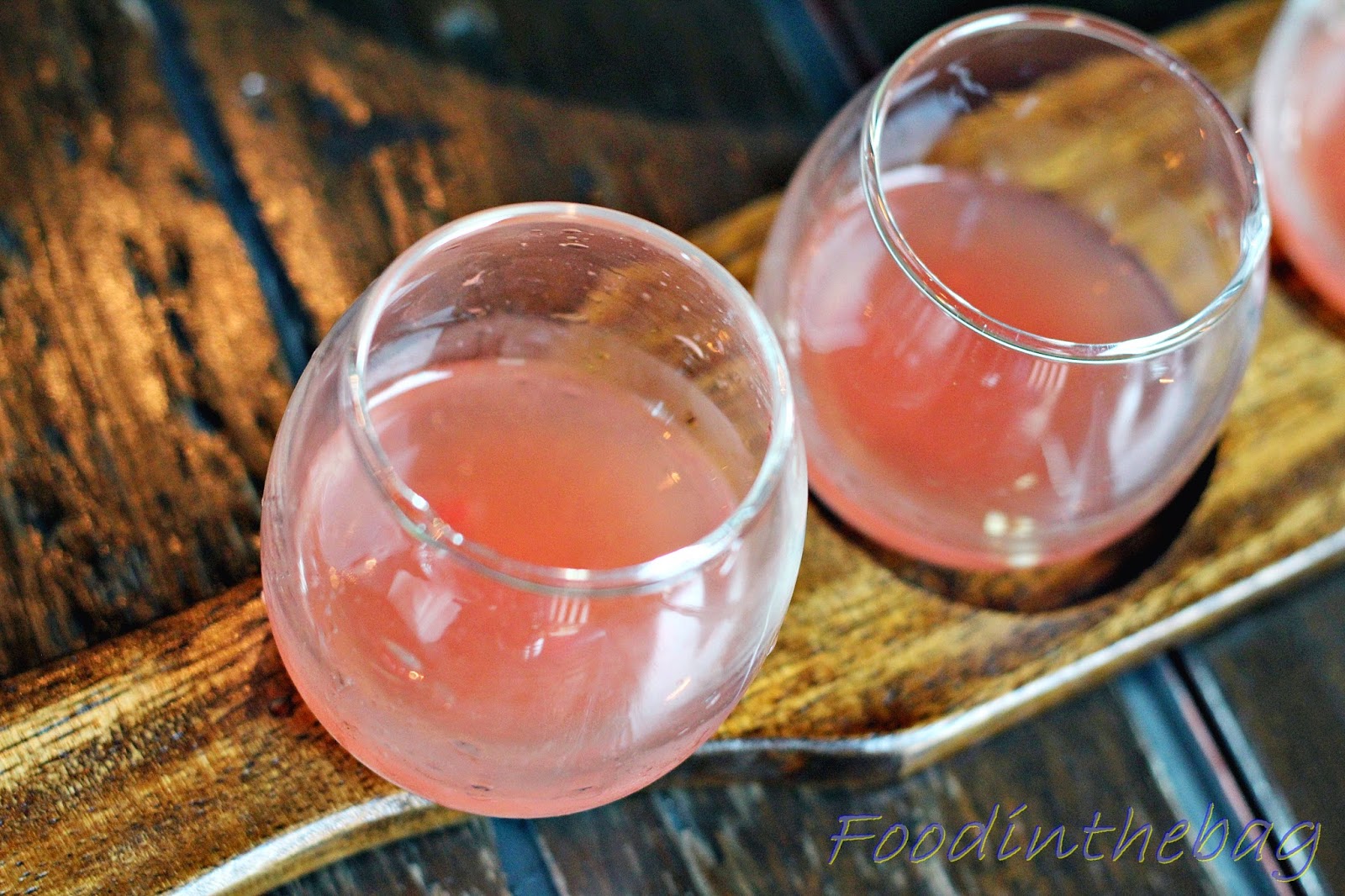 Now this drink has chilis. BC taught us that hot stuff becomes hotter with chilis.
Furthermore, she explained the different types of tequilas and I was surprised to note that premium tequilas aren't really for shot glass but rather are drank slowly.

Another flavor twisting would be when you drink it party style. You lick the salt, gulp the shot and when you bite into the lemon, it tastes super sweet even if it is not.

ASIAN STYLE CEVICHE of MACKAREL with FRIED PAPADUM - all right but nothing too special. 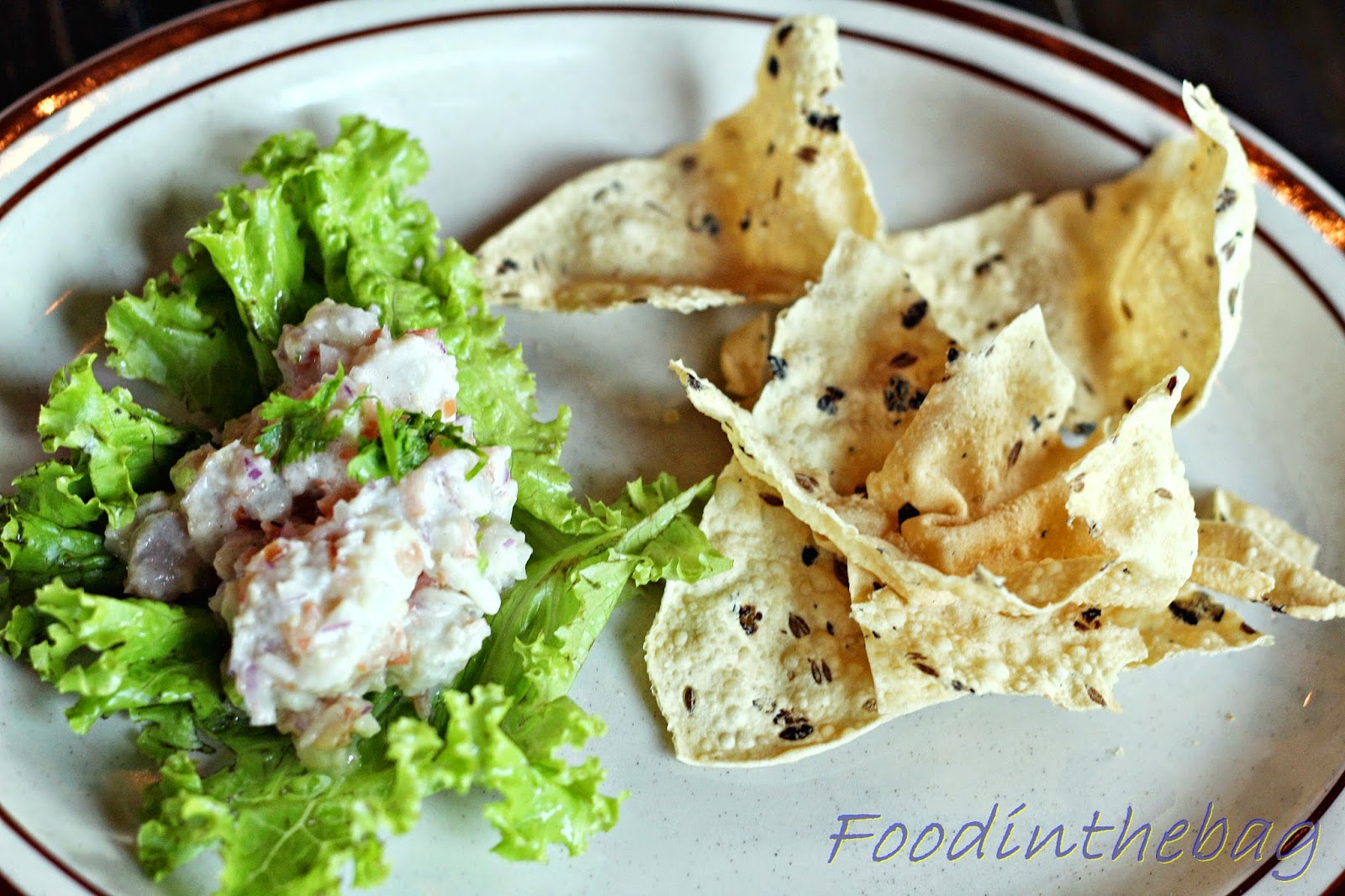 By this time C was swirling. She was slouching on her chair and admitted that the room was moving.  and I guess, this would be a reminder to drink responsibly and for me not to take her drinking again..
(Well unless if I wanted to have her spill all her secrets bwhahahaha!Evil Plan! But I don't want to carry her awts! ... KIDDING!)


After thanking our kind hosts, we walked around the strip to DRAFT GASTROPUB. Draft has been a go to place when it comes to having excellent beers and getting the alcohol one really needs. 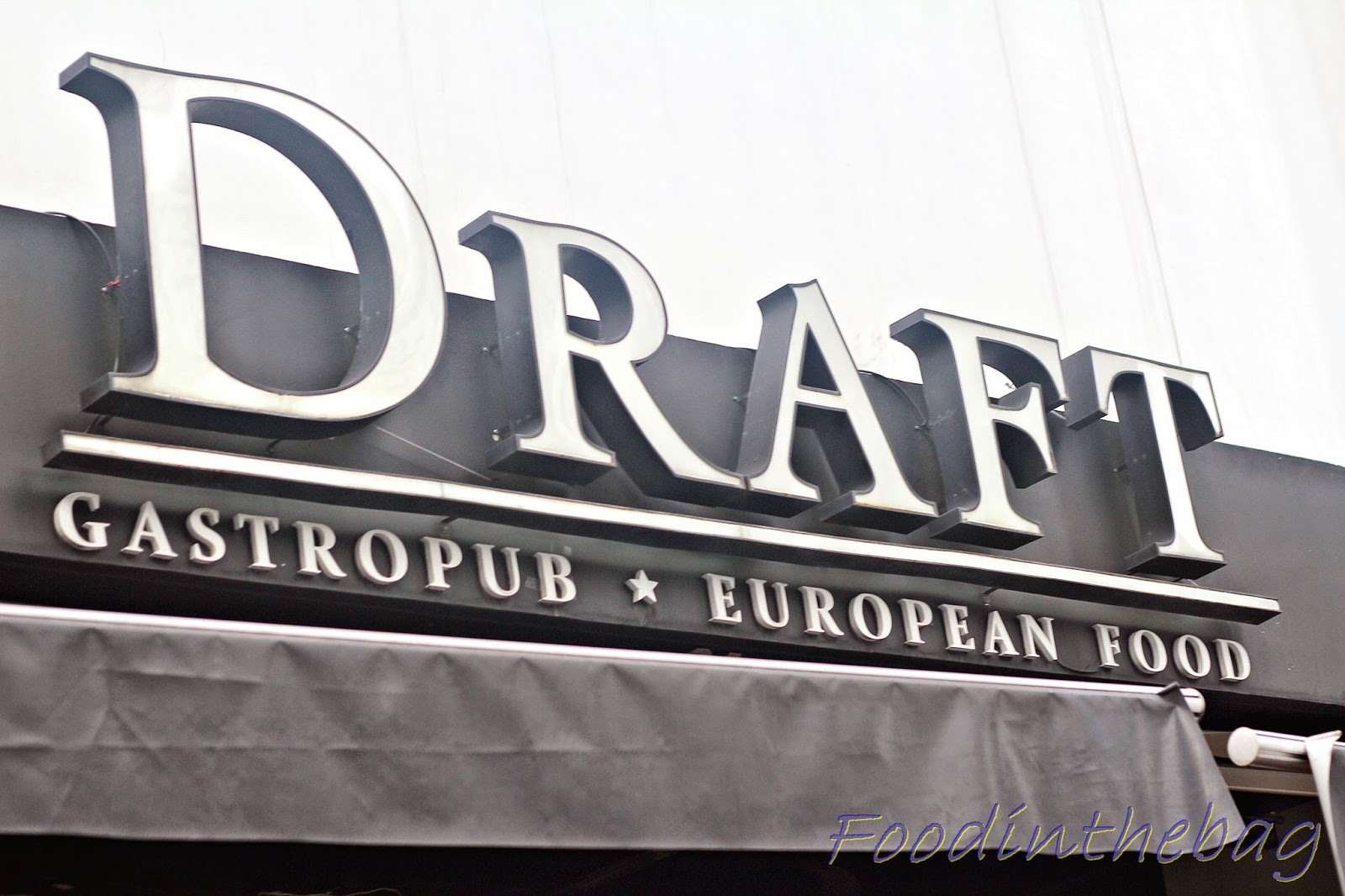 We got served 3 different pairings. Beer and chows.
FRITES or fries which was served with aioli  and MOZZARELLA NUGGETS or cubes of mozzarella breaded and fried with tomato sauce. 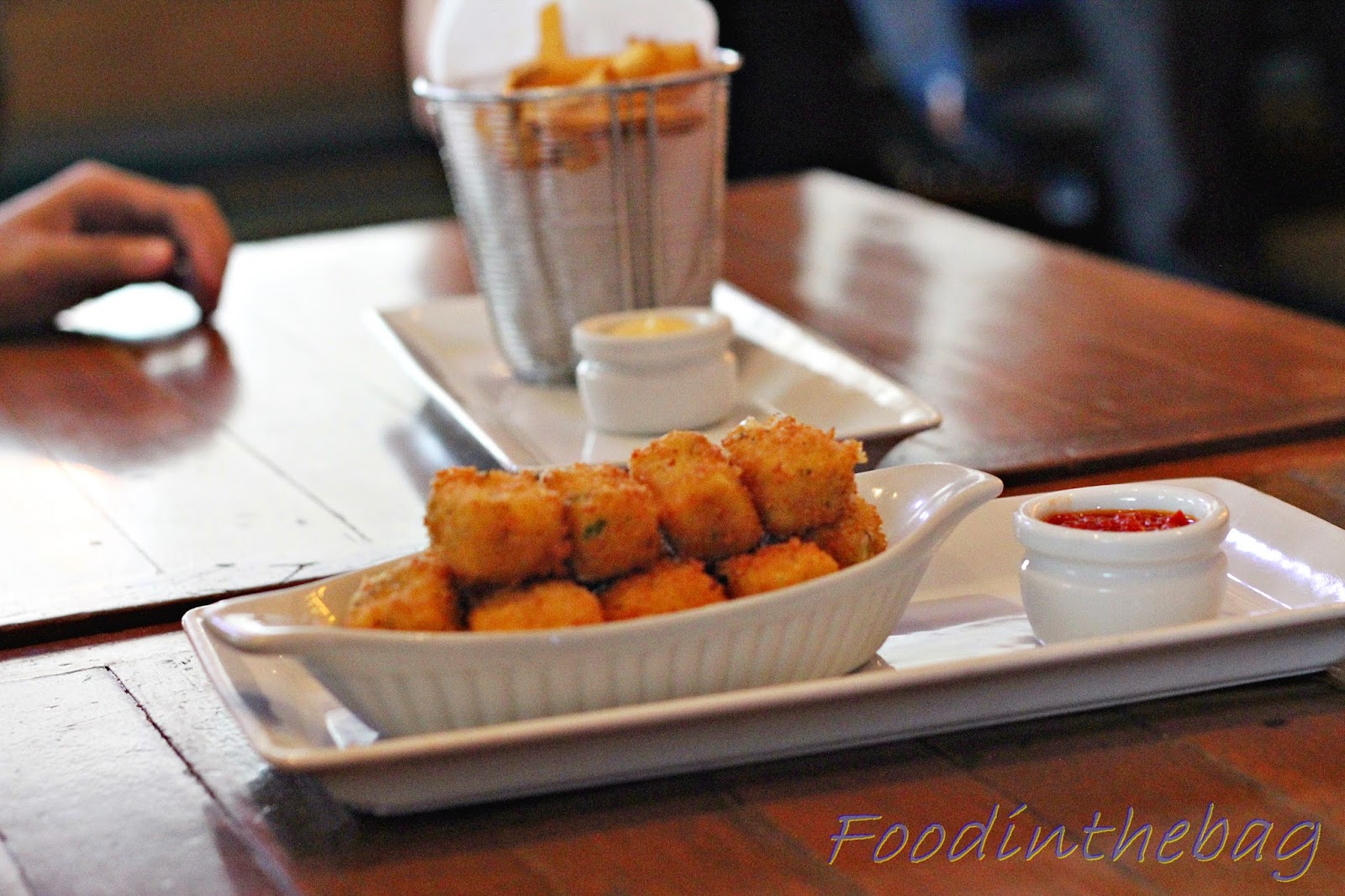 What made me happy was the SAUSAGE PLATTER. It had Pork and Fennel Sausage, bratwurst, and hungarian sausages with roast garlic potatoes and sauerkraut. 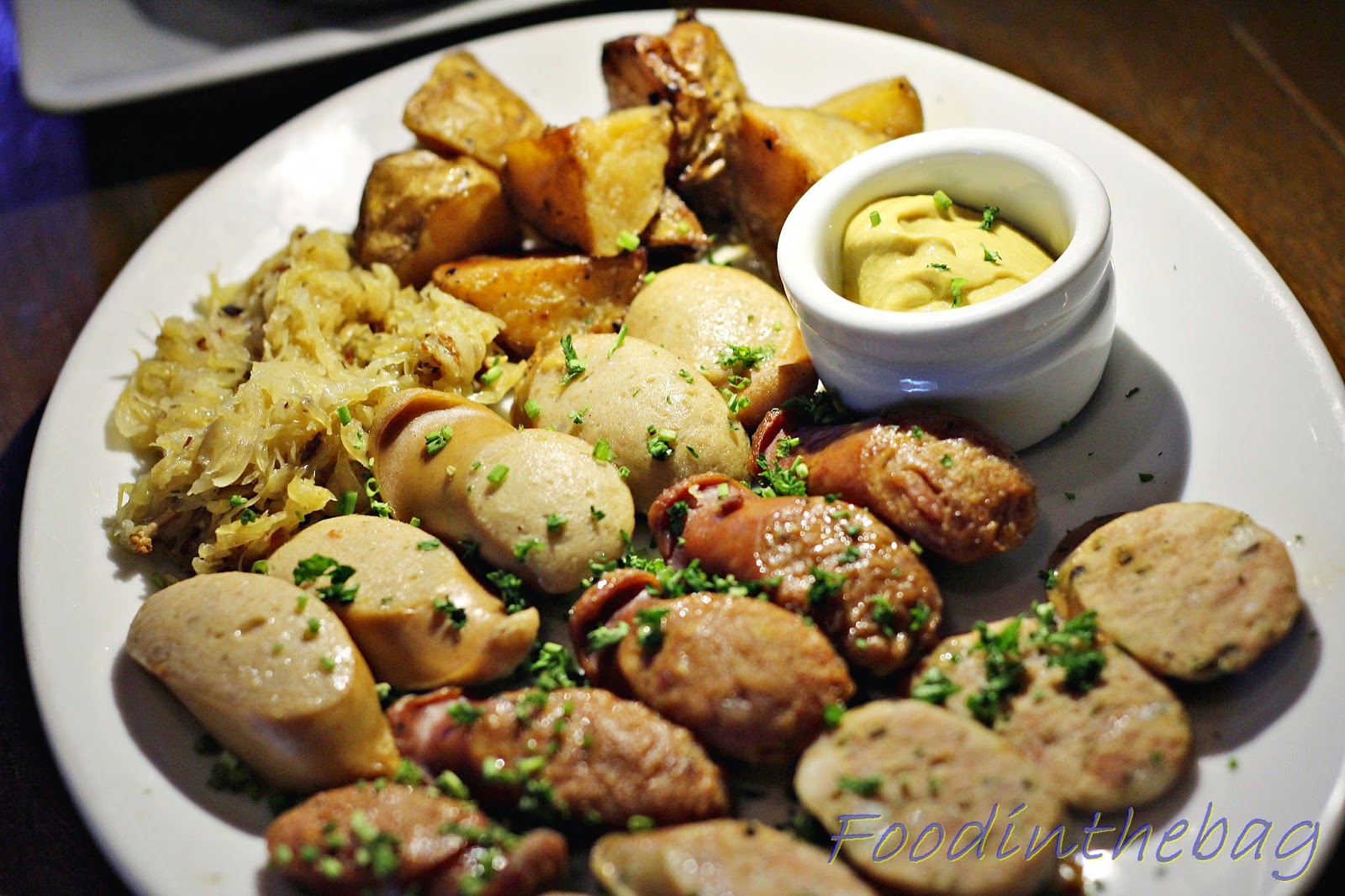 We got to try 3 beer taps. They were HOEGAARDEN, STELLA ARTOIS and CHIMAY.
If it was up to me, I would have brought HOEGAARDEN home as it was light and was pretty much sweeter compared to the other two. Stella for me has a crisp flavor while Chimay, well its a bit bitter for me. Of course, it may have tasted different when drunk alone because of the food pairings we had. 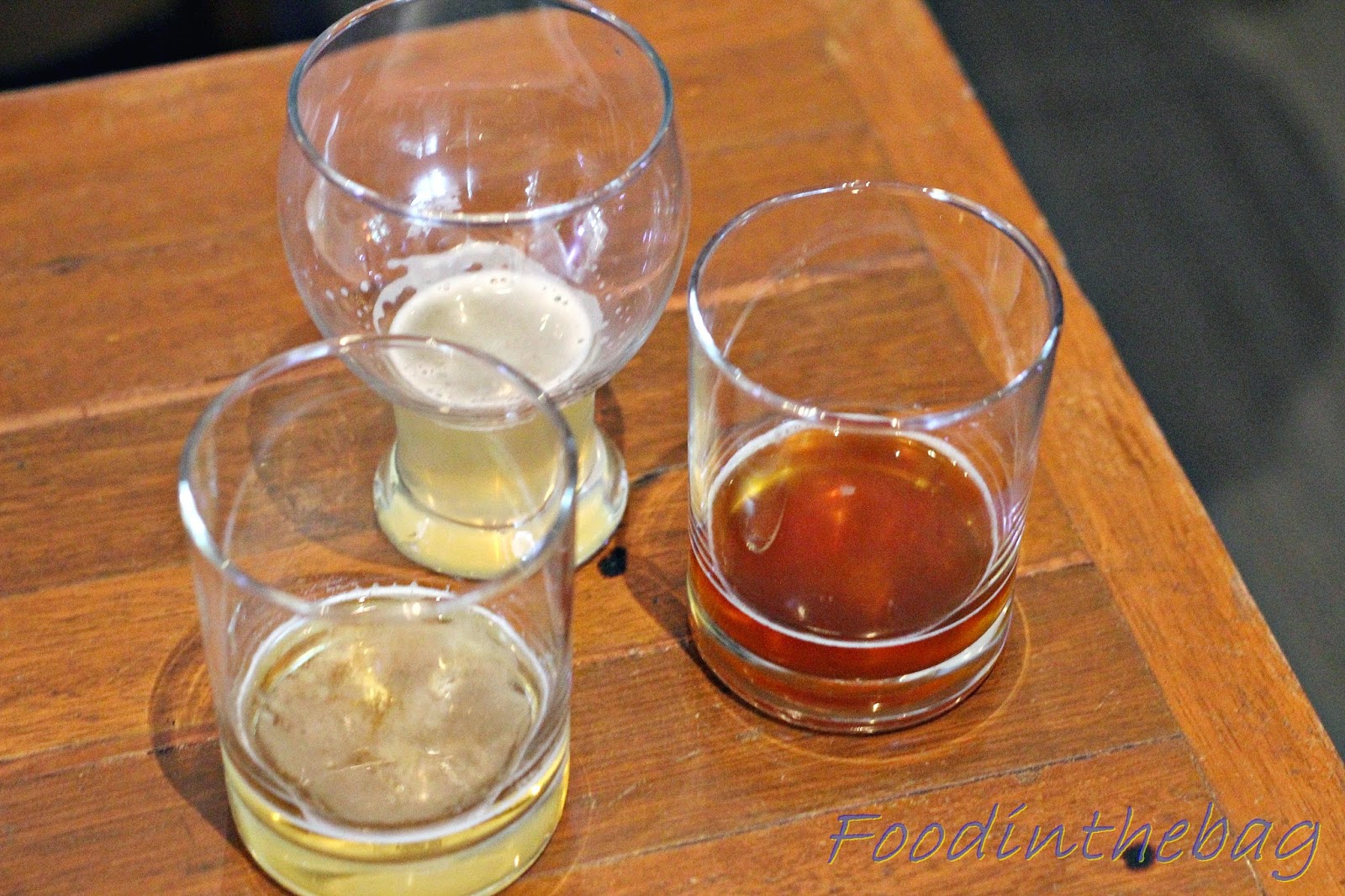 Before I forget, BC explained that BEER is made of 4 things: GRAIN, HOPS, YEAST and WATER. (I hope I got it right. LOL!)


Walking a few more meters away, we were led to MODERN SICHUAN RESTAURANT. 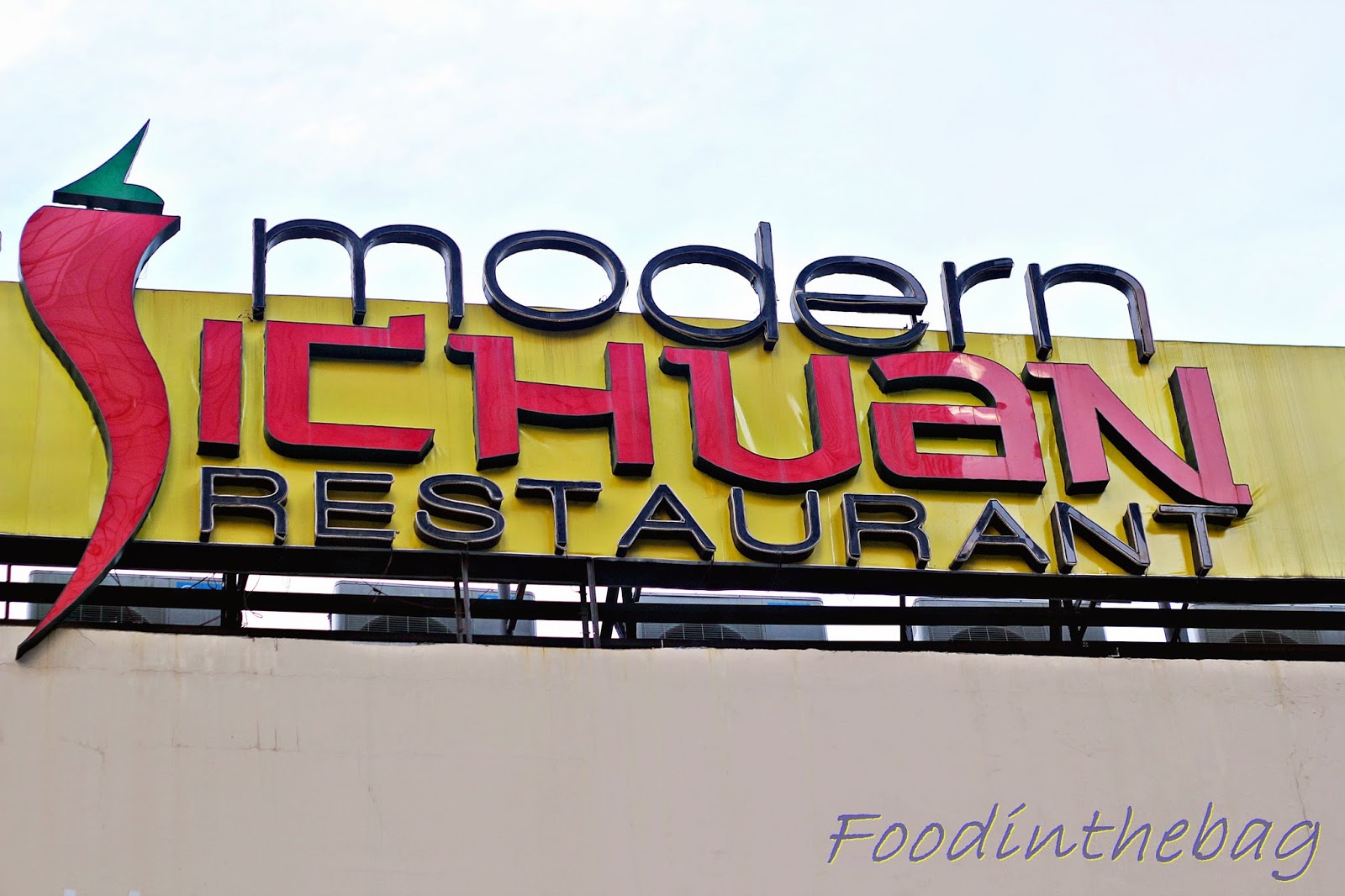 Quite incredible because here we tried to have some TOCORNAL CHARDONNAY along with Chinese Cuisine. 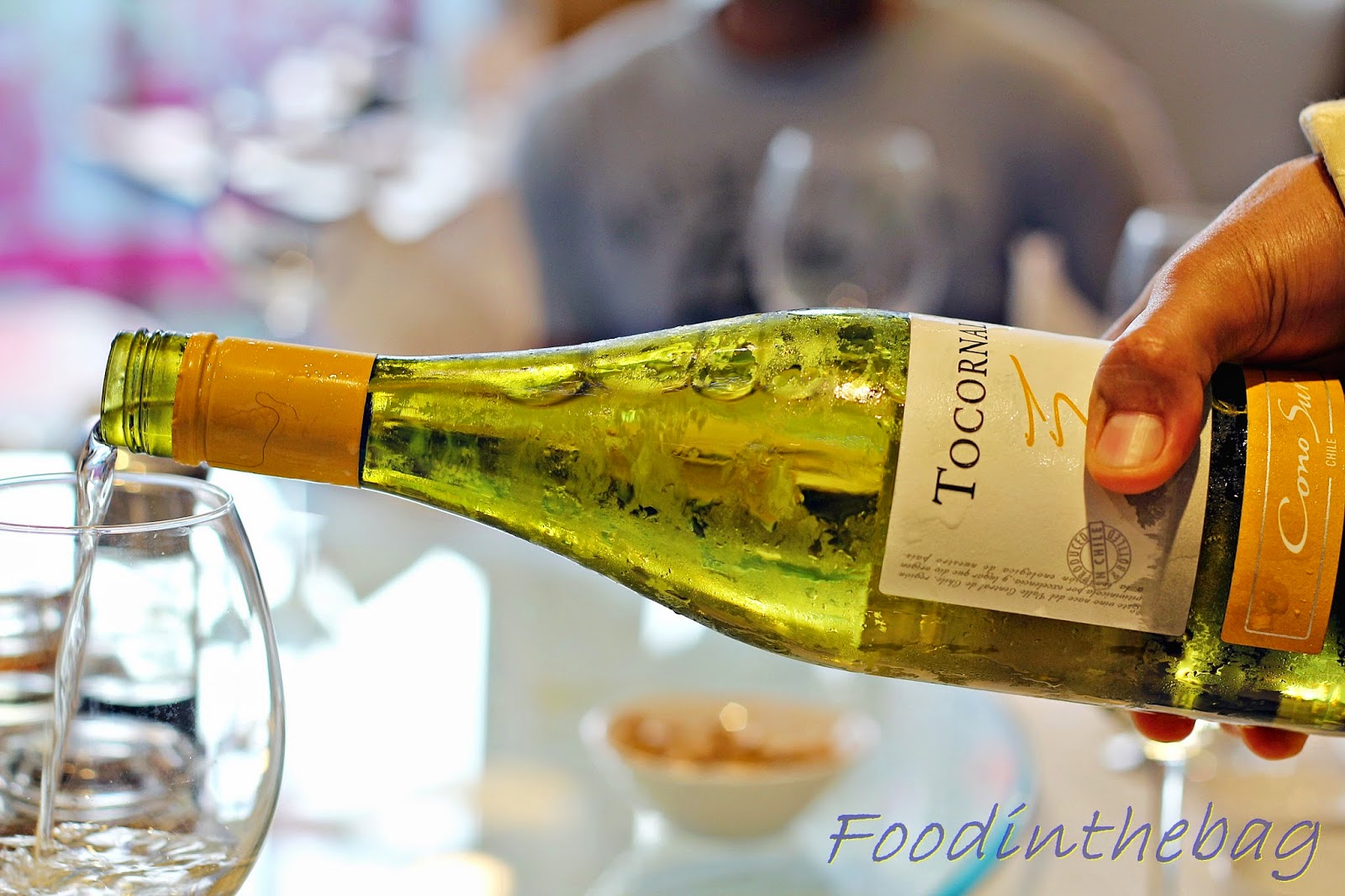 We got a taste of PORK SLICES in CHILI SAUCE. Surprisingly, the chili isn't hot. Its the flavor of the chili that made this dish pretty awesome and it stands out. 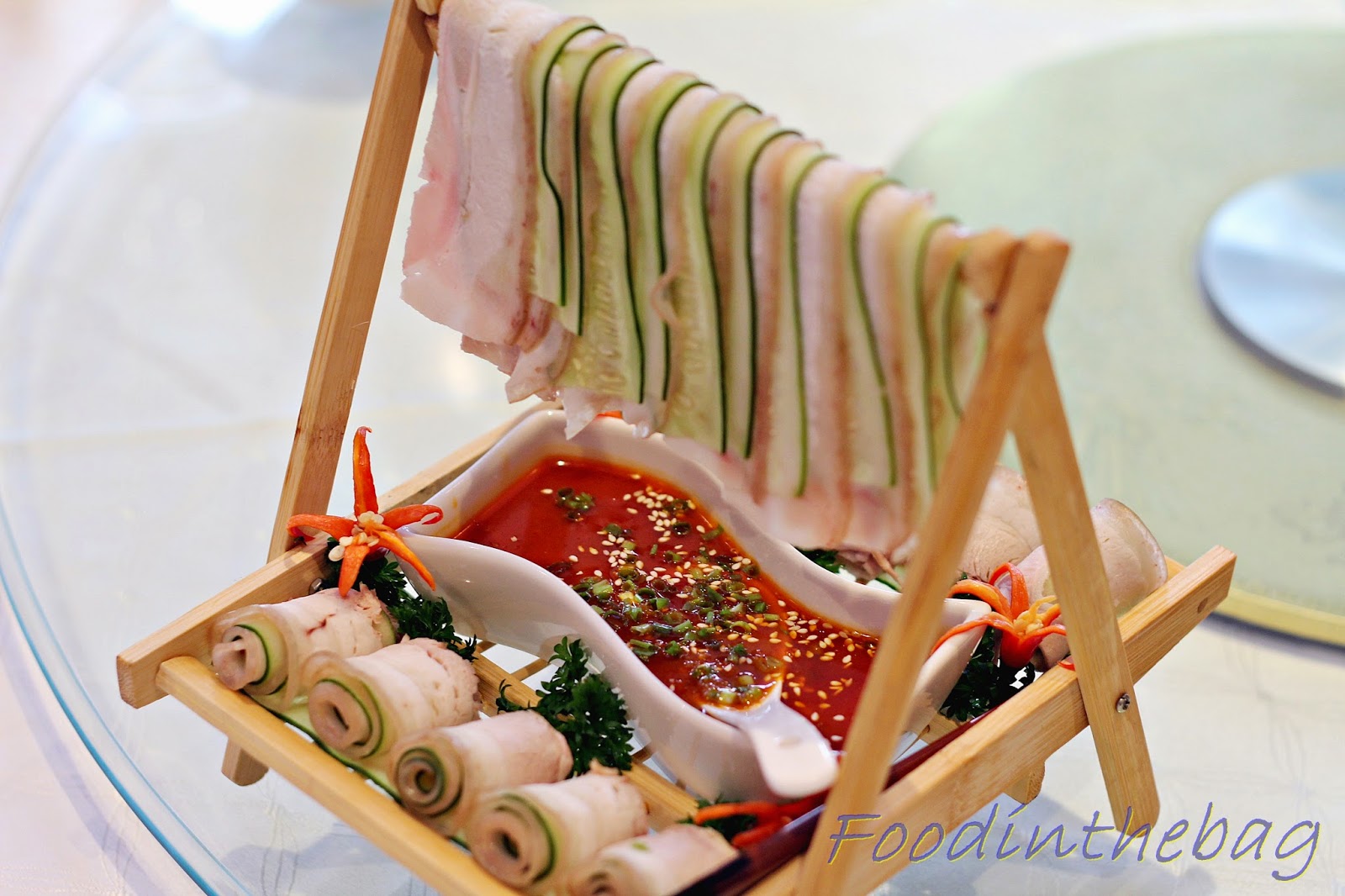 The NOODLES with CHICKEN and BEAN SPROUT was a bit spicy but still perfect. The noodles were freshly made and cooked. The chicken was moist and the chili sauce isn't as spicy as you would normally have it. 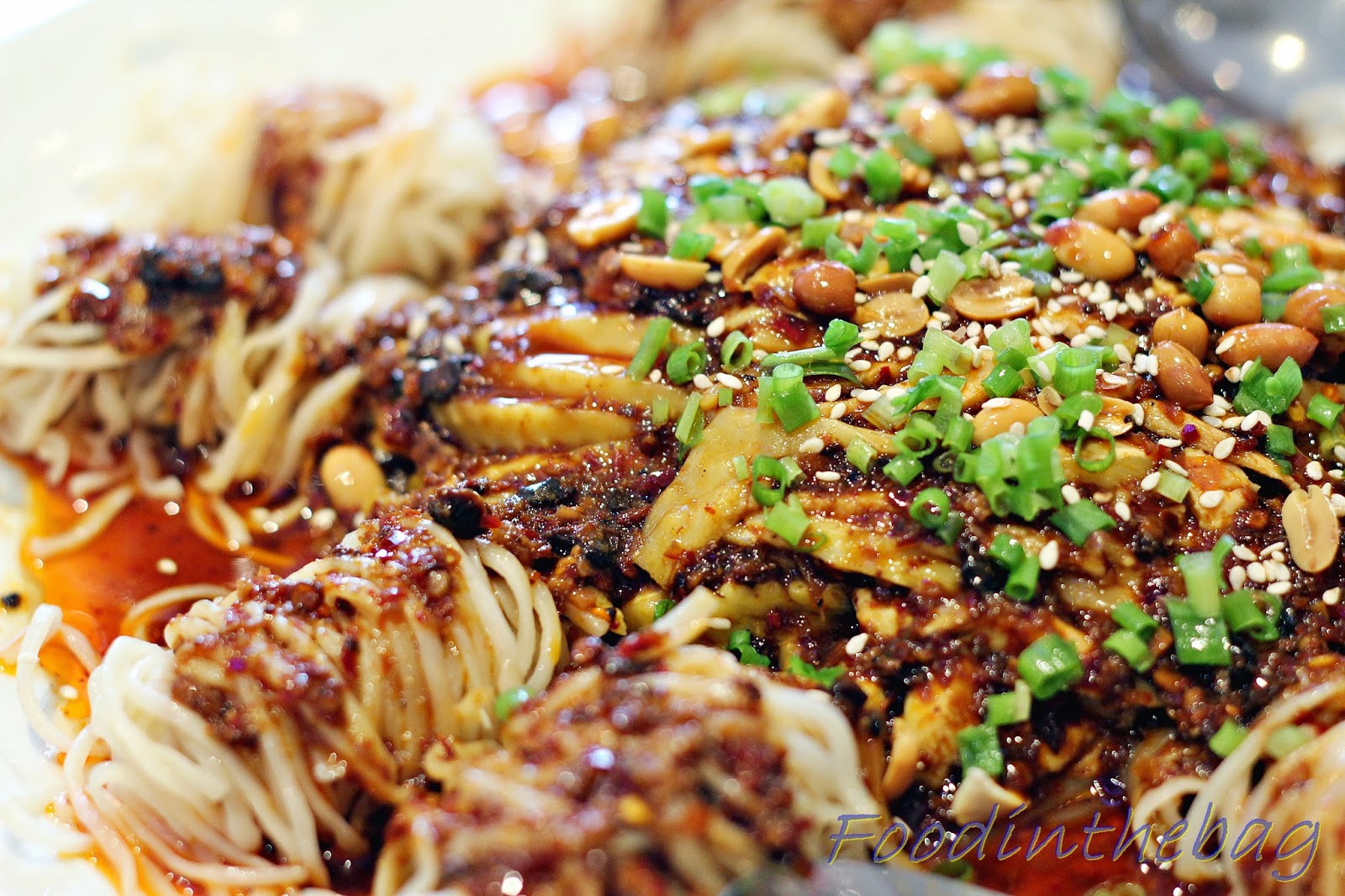 For dessert, we got the FRIED SWEET POTATO with CHEESE. 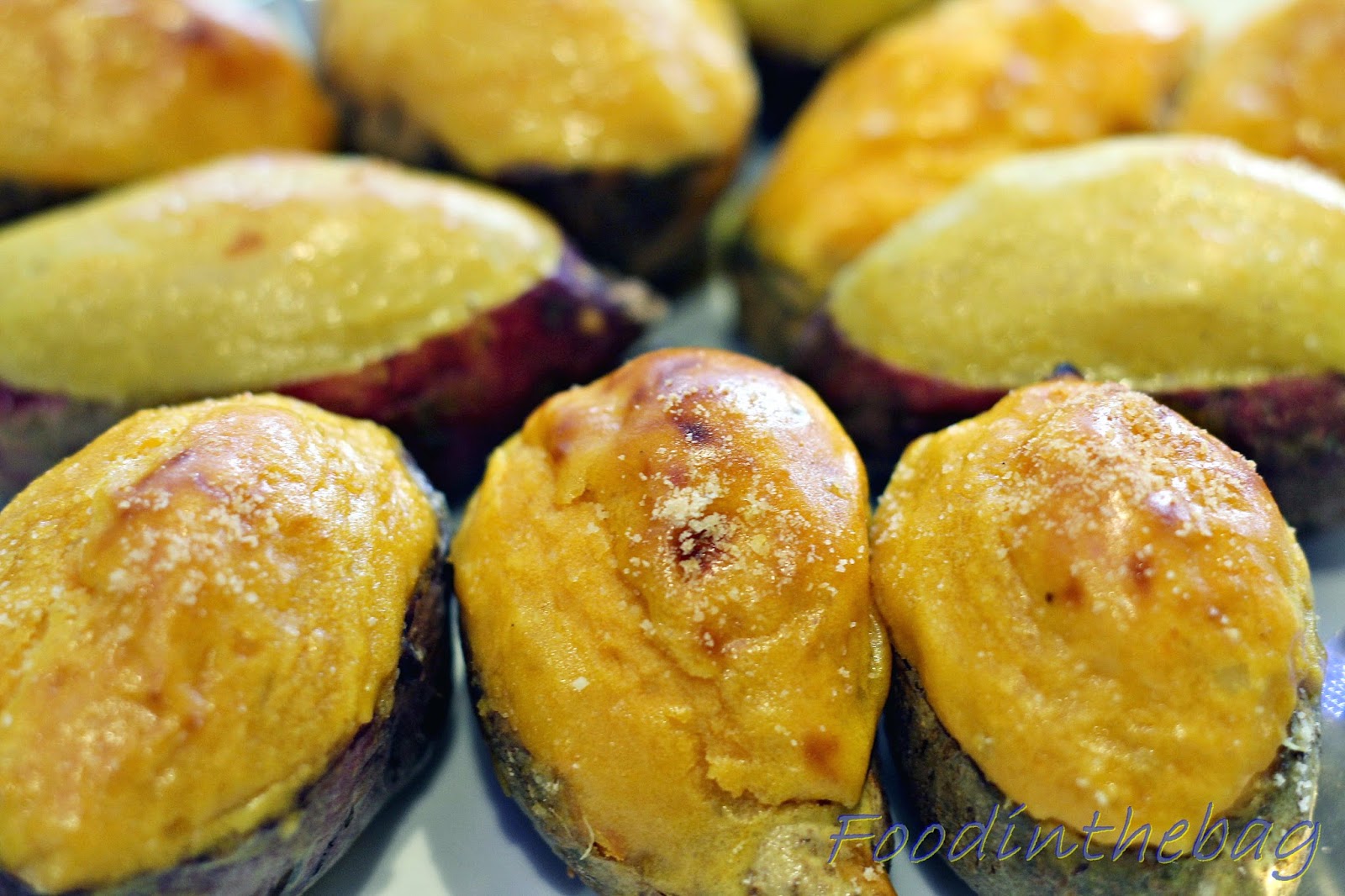 Just as like what our gracious host said, the taste was somewhat like yema but its less sweet and is a little bit healthier.

For our last stop, we were pretty lucky!! We were lead to VANILLA CUPCAKE and BAKERY.
Of course, C and I had been here a couple of months back and she loved the place. She was really all gaga when the bus stopped and JJ informed us where we were going. 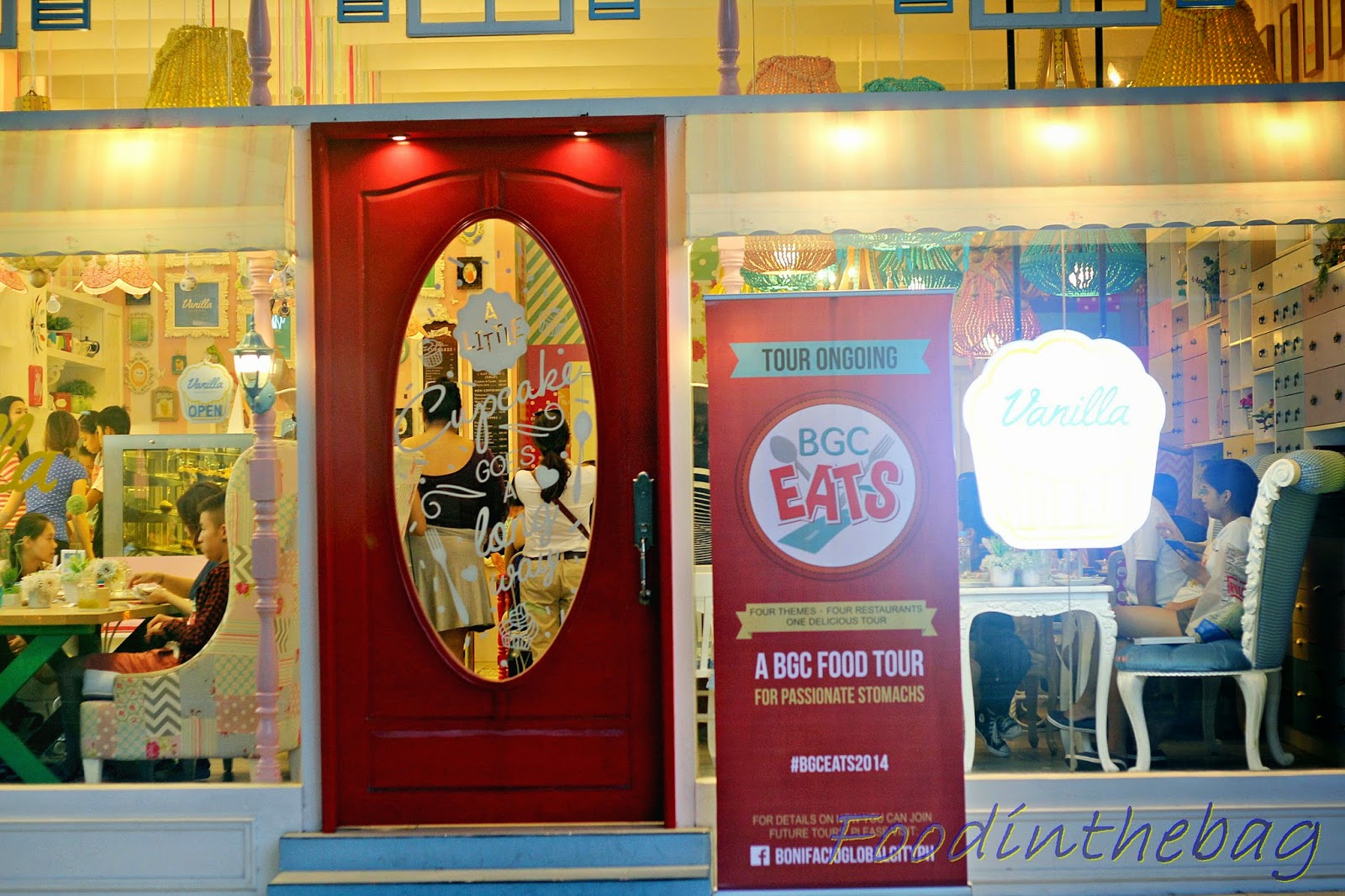 We were served some fruit flavored iced tea drinks like apple, guava and strawberry if i wasn't mistaken and an order of CHICKEN PARMIGIANA. We were also supposed to be served SALPICAO and another savory dish but everyone was just too full! So, we had the pasta and the chicken wrapped up to go and asked not to serve the remaining dishes. 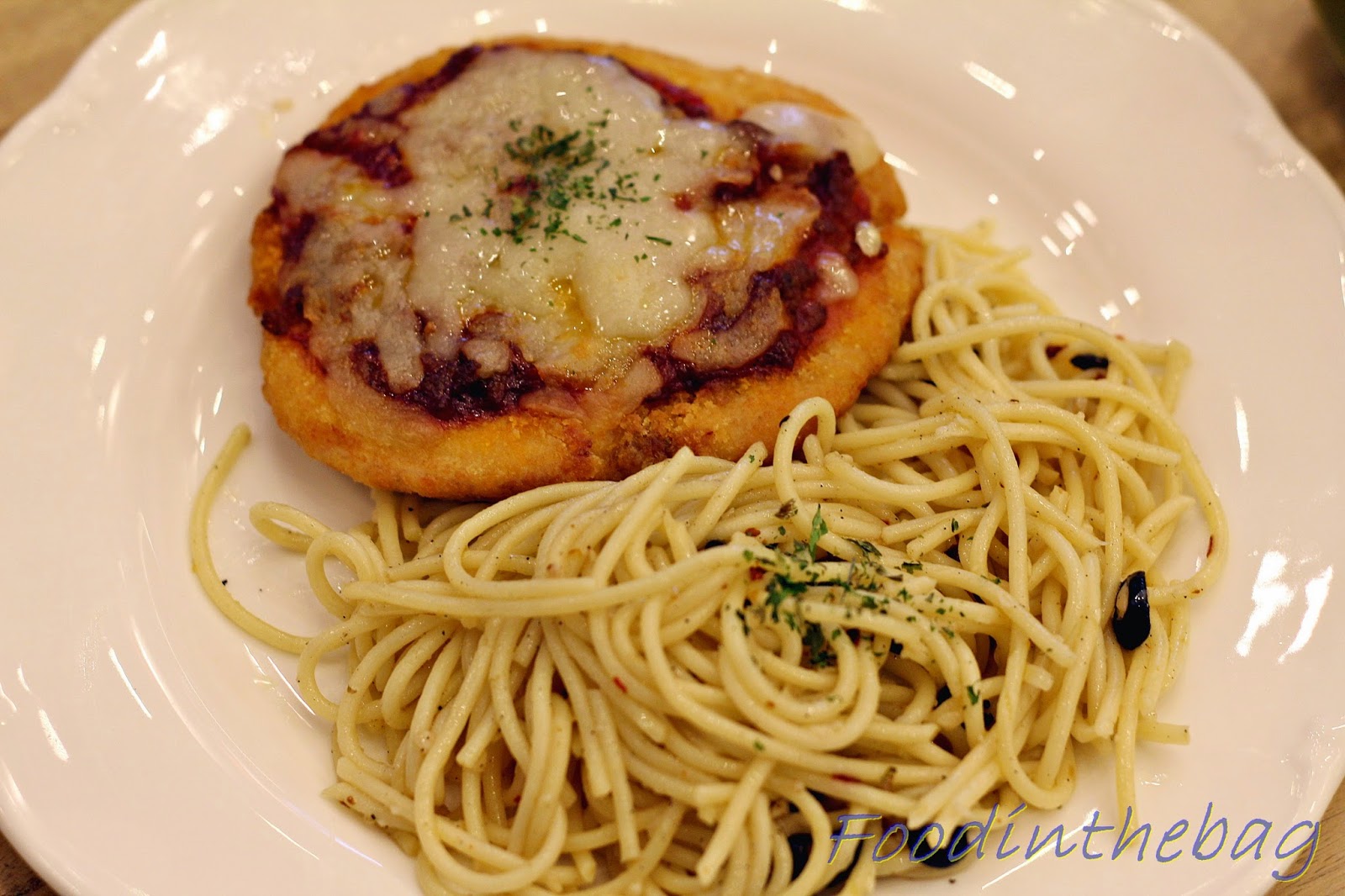 BUT WE NEEDED dessert! So, we were handed some mini cupcakes and it was still devoured even if everyone was pretty much full at that moment. 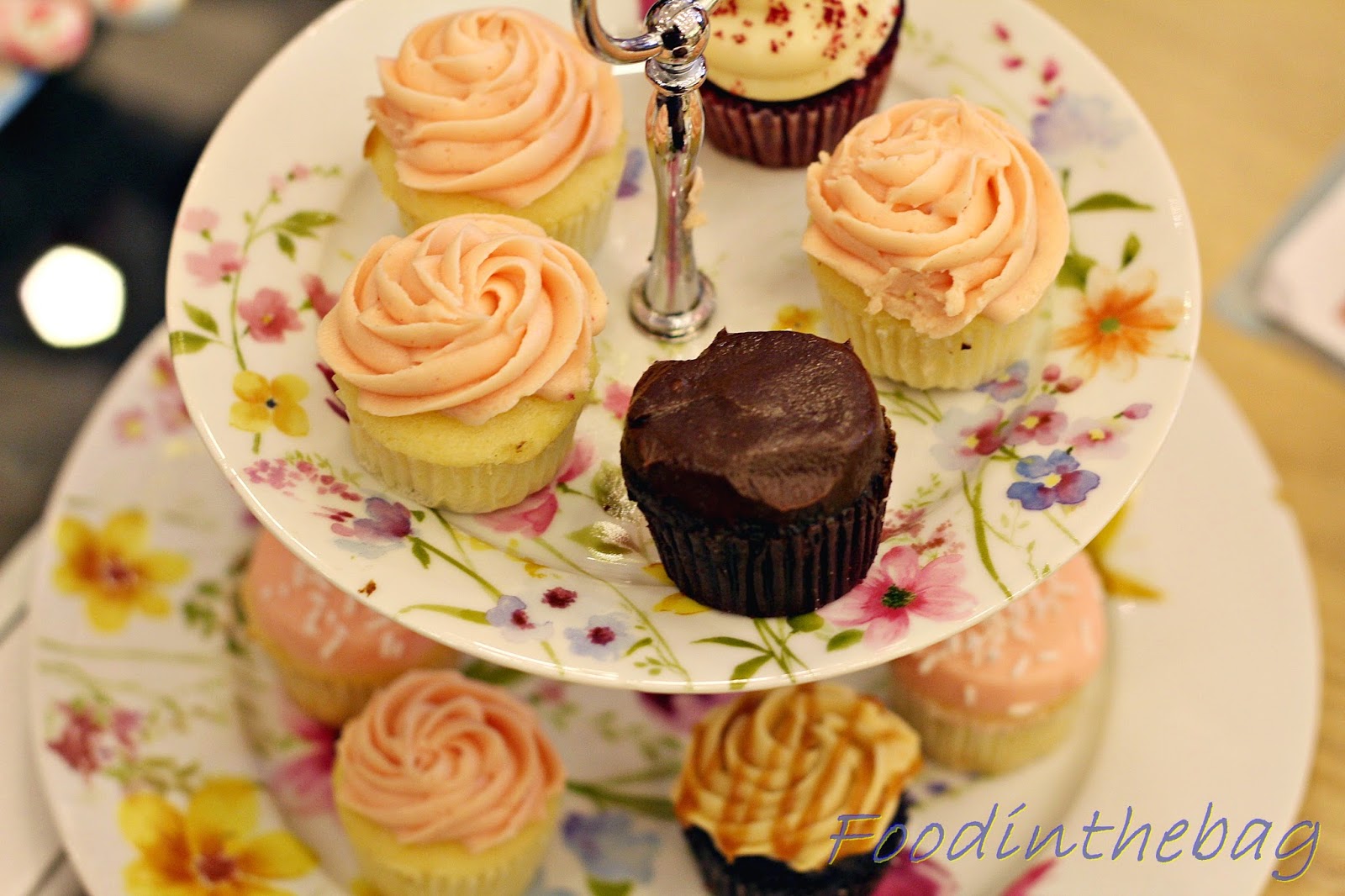 And yep, we got it all to go. C brought everything home as she was in heaven. LOL! 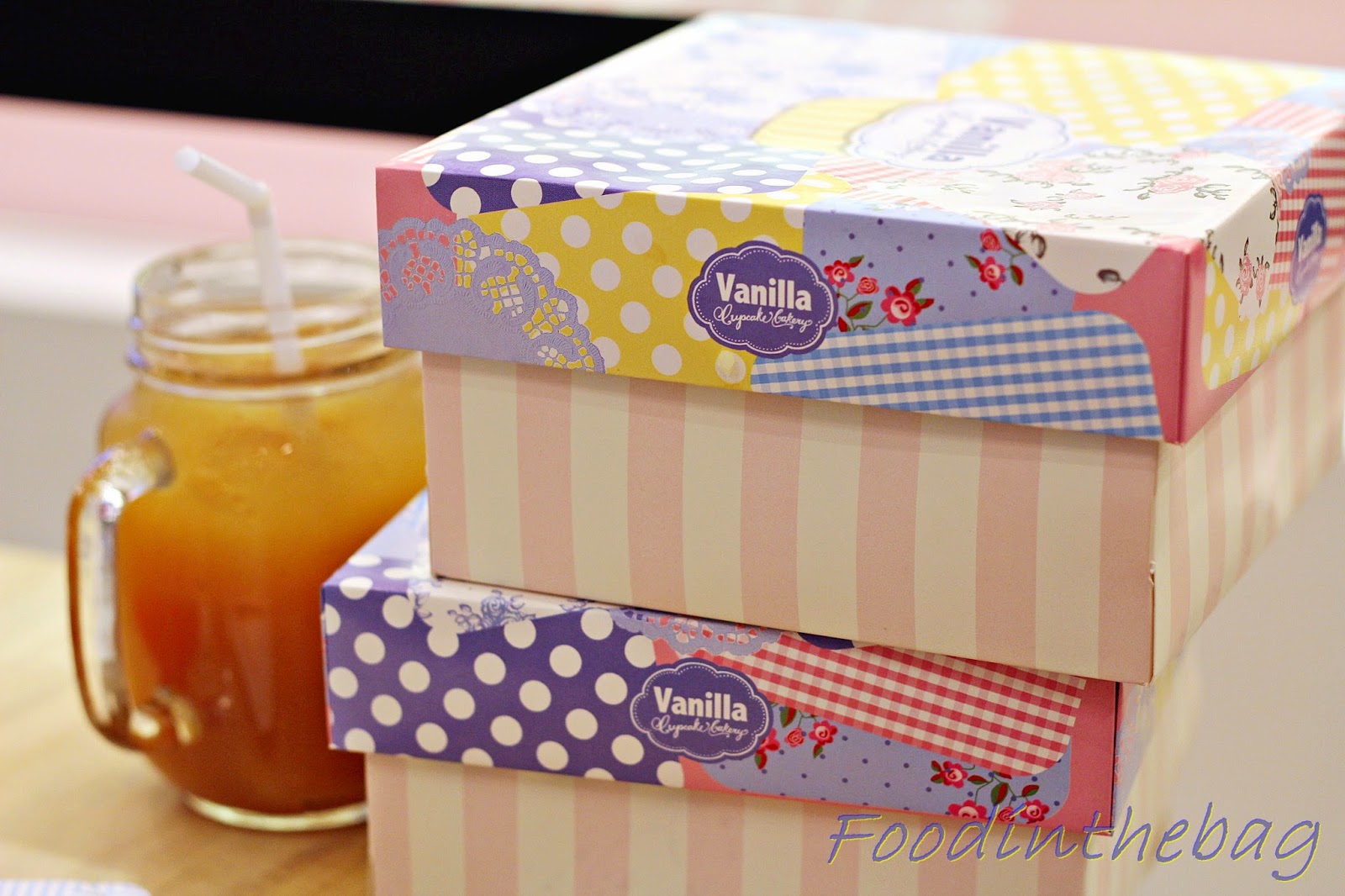 By far, this edition has been the most food and knowledge packed BGC EATS 2014 edition I have experienced. Compared to the previous week and also to last year, this was totally packed. We finished almost 7pm and yes,as I said, we asked for the food to stop coming.... INCREDIBLE. SUPER FULL!!!

Can't wait for next year's edition. No more tickets here as I gave my last pair away. Promise!

DISCLAIMER: wrote this based on my experience and I got hold of the tickets by redeeming them.