For the past 3 months, I have been going through an off on phase with my ISP. My internet connection would be gone for half a day to almost 3-4 days. Since I was/am so pissed off with my current internet service provider (ISP) which I have been a subscriber since 2005. I decided to check out Sky Broadband. Our household is a heavy internet user, so I opted to try out their unlimited broadband services.
It was fortunate that they offer a 15 day trial with no cash out and fees. 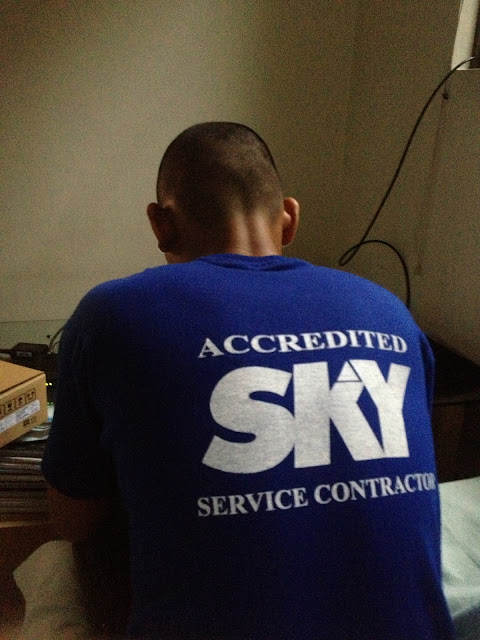 I would admit that different ISPs have different experiences as to the location and the time where they were used. I opted for this since according to some of my friends from the neighborhood, it was stable and giving them good speed and service. I contacted their hotline and scheduled an installation. They asked if I would wish for a normal modem or one with a built in wifi. Of course I went for the wifi. It only had a 2000 pesos deposit versus the 1000Php for just the modem. Furthermore, it was fully refundable.
After calling and scheduling, it was noteworthy that a day before I got a phone call from them confirming everything and asked if I had questions or needed anything else. 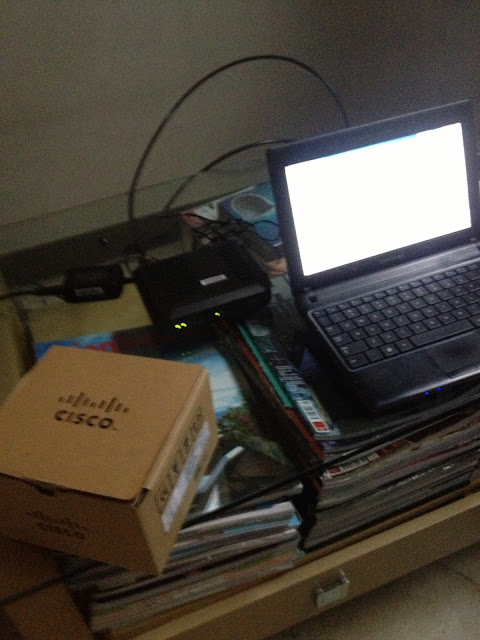 Once the contractors came, they quickly installed the broadband with no fuzz. They even changed and checked out our old cable wires. Since we are a Sky cable subscriber, they actually used the main line and upgraded some of the wiring to be used on the broadband. 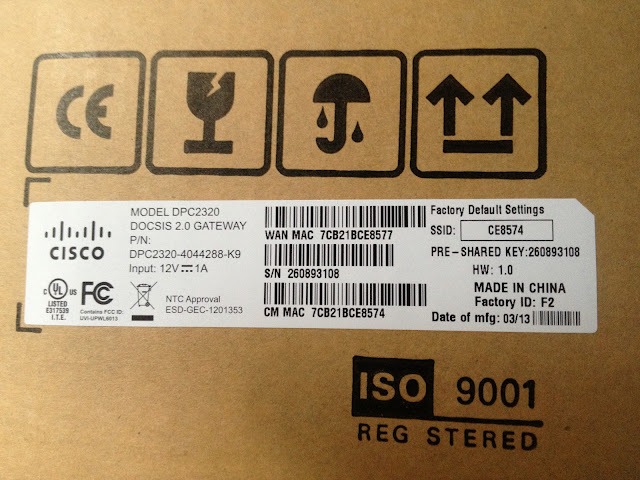 They provided a Cisco modem wifi router. According to them it would reach around 300ft. I was doubtful and of course it didn't reach that far. Good thing it reached my room. 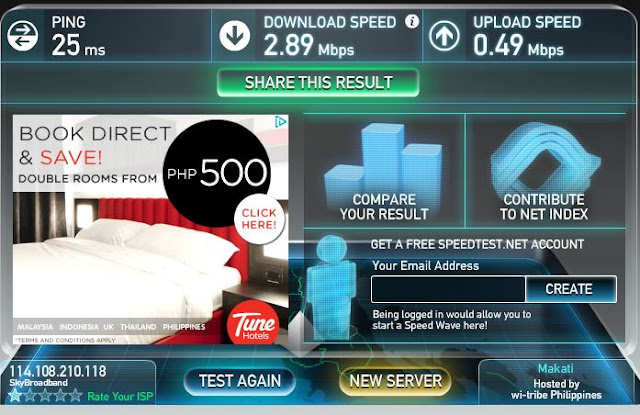 I opted to try their 3mbps package to be able to check their stability and promised speed. My first speed testing clocked in at 2.88 mbps. Subsequent ones have the same range in terms of speed.

In case you wanted to check things out. Here are their plans. (taken  from http://www.mysky.com.ph/locations/loc/3/manila/plans ) 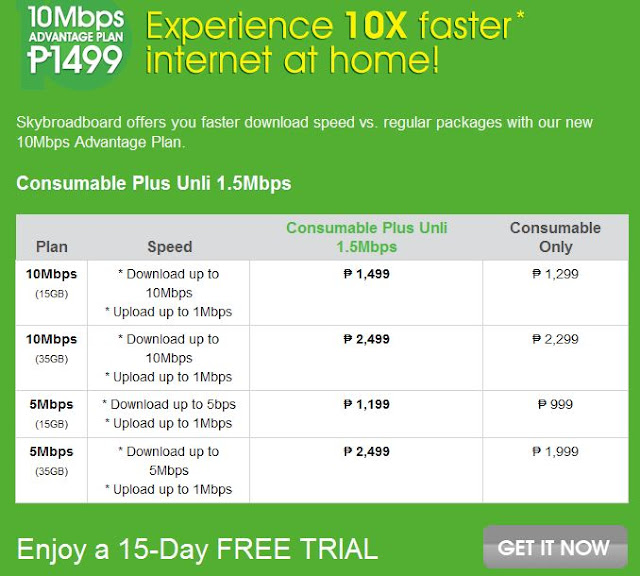 What caught my eyes were the consumable plus unli 1.5MBPS. It gave you this high speed at a lower cost. Upon reaching your limit you could add just 200 pesos to have 1.5MBPS unlimited. Also, they have this promo that from 2am-8am, your GB allocation won't be deducted as long as you have some left. If ever you just wanted to add some more bytes. One GB is 50 PESOS.
These plans aren't automatic. One would need to top-up and check into a website to be able to choose what one wants. The only problem here would be if you are in game and suddenly you reach that mark. Also if the charges are changed into yearly, semi-annually or quarterly, there would be discounts such as 1 month discount to 15 days to 7.5 days off.
Here are the other plans. 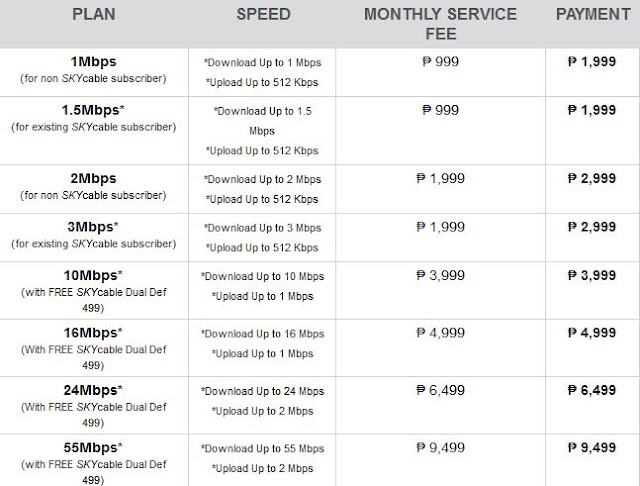 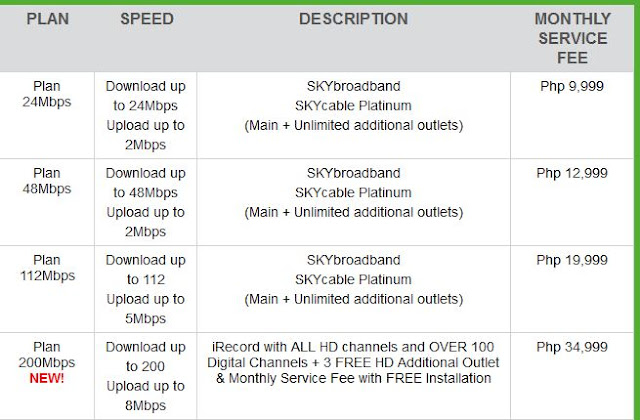 So far, everything seems good. It has been raining hard and my internet connection isn't affected. The only concern for us is that my brother is checking if his games like League of Legends and other online stuff are affected. Please do tell me your experiences on your ISP so that I could compare and think if I would continue and subscribed with Sky Broadband. THANKS!!!!


After making my brother play his game, we found out that there was a problem logging in. He couldn't do it and an error message is popping out. He went back to using the old isp to play his game. The usage of Sky Broadband as an ISP for his particular game caused some problems. Upon checking their support pages, a lot of gamers had problems with this ISP. They couldn't connect. I have contacted Sky's customer service and they have told me to do some measures. Like restarting the modem and also the laptop and for the moment try to observe. Since my brother can't play during the weekdays, I tinkered with it and was able to play after doing their requests. So far, everything seems good. I have decided to cut my old ISP and use Sky's service from now on.


DISCLAIMER:This is based on my experience. I was not paid nor asked to do a blog post on this.
Tagged