Even having great bed weather, I forced myself to wake up early and get my NBI Clearance. It was back to reality. Since Ever Commonwealth is near my place, I went there around 5:45am to line up but I was surprised to learn that it closed a few weeks back. I was pushed to go to Quezon City Hall to get a clearance. 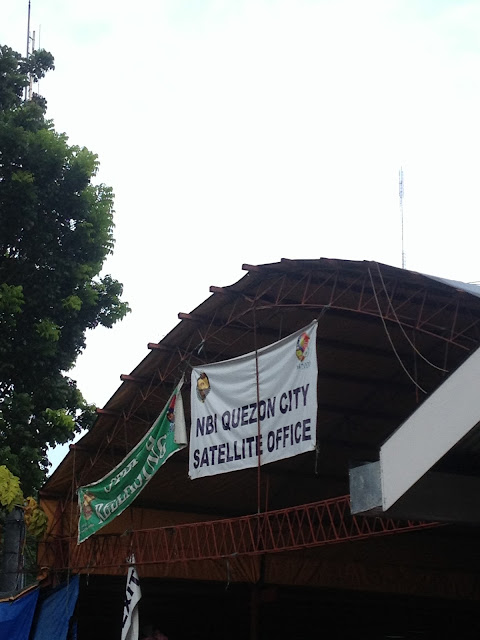 After college, one would need to get some requirements for work. One of those would have to be the NBI CLEARANCE. I know this post isn't about food but I guess this would help those that would apply for one.

The new system calls for a longer time of checking. Since it is new, all of those that apply has no option to renew their previous applications. Thus, it voided the renewal card I got a few years back (which was awesome because I was able to use it twice and just got in and out within 5 minutes with the clearance at hand). I believe that the old contractor didn't endorse their information and everything went back to scratch. 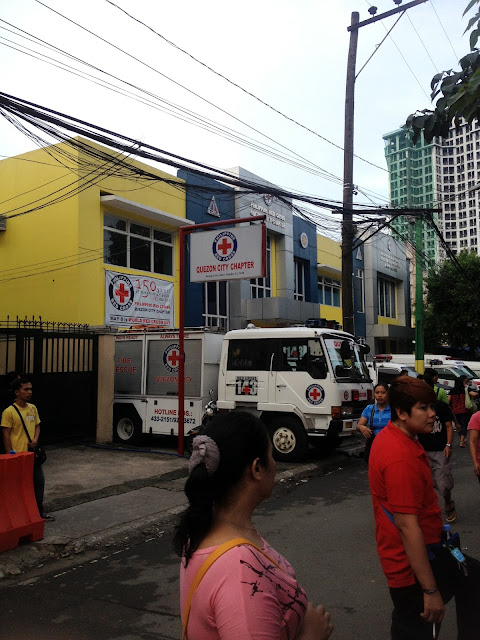 Tip 1: Better drop yourself off near Shell gas station along Kalayaan Avenue. Just follow the long line and you will be okay. The renewal center is in front of the Philippine Red Cross Building. Be careful where you line up. An example would be a manong I was in line with was there at 4:30 in the morning but lined up at the wrong place.
As I arrived, I saw the long line. I was around 234 in line already and I got there at around 6am. I was lucky enough to be allowed to go to the priority lane (LOL). I stupidly lined up as early as 6am without me knowing about the lane and boom! Sayang. I was still pissed because even after I searched online, I didn't foresee that Ever's renewal office was closed.
(can't get over it)

Tip 2: Remember to get your valid identification (bring 2 different kinds) photocopied and to bring a black pen. There are a lot of photocopy machines around and there are vendors of pens too. This would save on time and on money. (Bring a fan and an umbrella because it gets hot and it might rain) 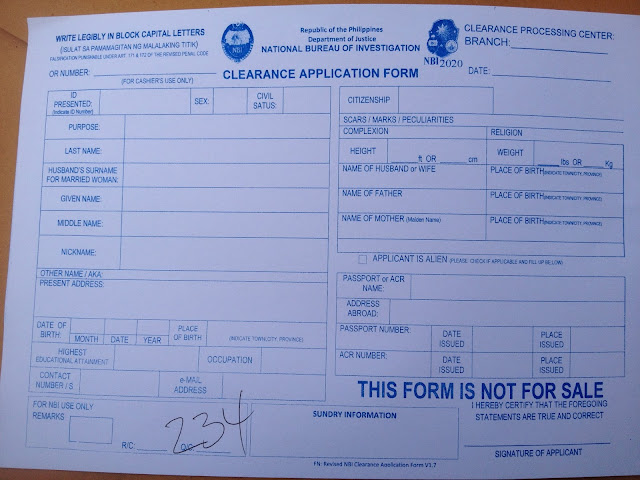 Tip 3: Either be there extremely early or an hour or 2 after lunch. Remember pursuant to Anti-Red Tape Law, a directive was enforced that there would be no lunch breaks in government offices. Usually, the counters would take turns in taking a break.

The 1st step would be to pass the photocopies and to get the application form. The form is not for sale. This desk opens at around 6:30am. They have a quota per day so its either you be early or you go there late to avoid the lines. I saw that if you get there at around 8 am, there would be no line in getting the forms but the payment line is just long. If you live near, I suggest in getting the form at around this time, and just going back after lunch. At least you will be assured that you get to have a form already.

If you are eligible for the courtesy lane just go straight to the front desk and get a form. The guy would instruct you to go inside and line up at the farthest counter that opens at 8am.
Tip 4: Bring the exact amount. For local uses, you would need 115(Php). Save yourself some trouble and bring the exact amount. After getting this form, you line up at the cashier line. A cashier counter  would open at around 7am. There would be around 3 counters for the cashier and a separate one for the courtesy lane. The other counters open at 8am.
Tip 5: Please be sure about the information you write on the information paper. Write legible and make it CAPITAL LETTERS and readable (unlike mine!LOL!). After paying, you would line up for step 4 or encoding. There are 3 counters. Line up at the counter nearest the entrance because usually, people line up at the next line thinking that the other counters are closed or for something else. Check your information again and again because any mistake would result in a reprint which would ask you to pay the same amount again.
Tip 6: Believe it or not you could smile. You could smile at your picture taking. I mean on the next step, you get to have your biometrics taken. From a photo to all your fingerprints, these are taken. Yes, you line up again.

Tip7: After everything, the last step would be the releasing. It takes a long time. As for me, a month would be my waiting game. This is true for local purposes but for travel abroad, you can pay an additional fee to get it immediately. I believe they facilitate and prioritize travel abroad rather than local stuff. Better to go around 3-4 in the afternoon as the lines at the releasing section won't be that much. 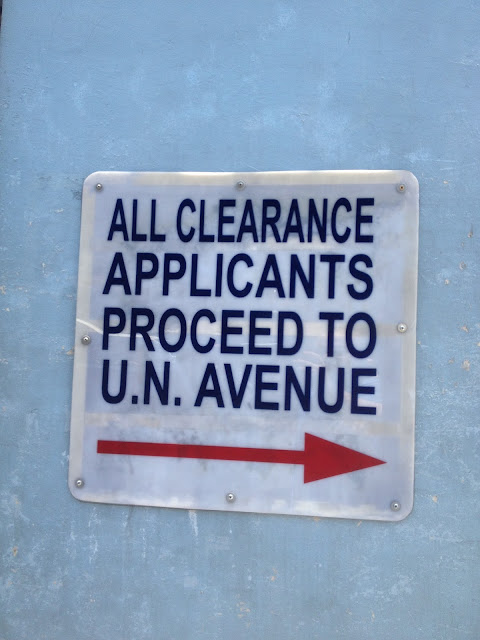 Even though I had already paid for it and lined up and wasted my time (because the submission of my requirements was in 2 weeks). I went to the main office along Taft Avenue in Manila. Here, the entrance is along UN Avenue, in front of the KFC restaurant.
I figured that since this is the main office, they would process it faster. Which in turn, they do. The process here takes 2 weeks compared to the 4 weeks in their Quezon City Hall Branch. Here, the place is bigger and has A/C. 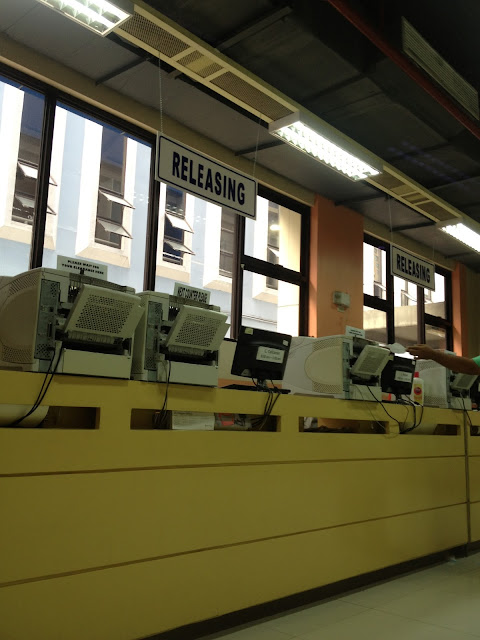 Also, they have a lot of printers compared to the ones in QC.

On a more personal note, I hope that the person that has almost the exact name that I have get caught already. I was surprised when I was told that I was wanted for robbery! LOL! More so, that it was a case filled during 2002 and in their system by 2006. Why? Well, I got my clearance before a total of around 5-6 times from the years 2008 to the present and never did my name get a hit. 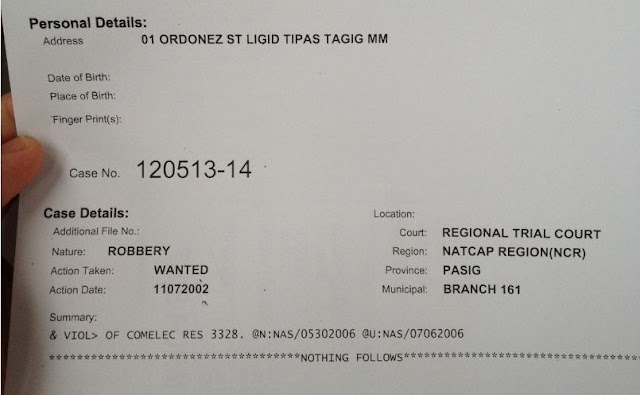 Since my name did get a hit, I needed to go to quality control. Here, I was interviewed and I needed to get an affidavit. 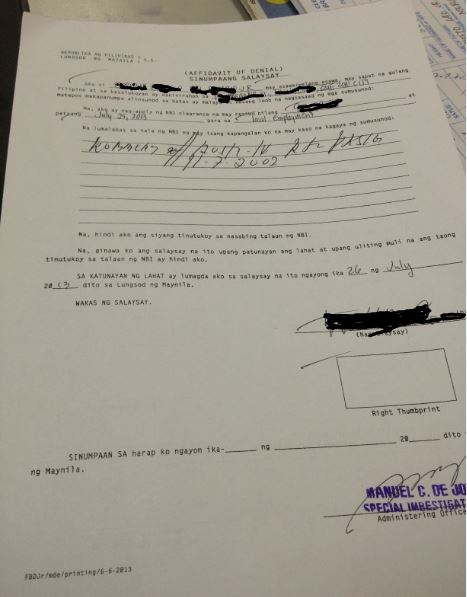 After going round and round I got my copy already. LOL!


I would suggest that they increase the cost of getting a clearance. For past years, it hasn't gone up and maybe this would help in improving their system and making the experience a more efficient and pleasant one. LOL. How's your latest government lining up experience?