UP Town Center's Ihop and Highlands Coffee and other resto...

I got to say it, the newest place in town is UP TOWN CENTER!!!
A few nights ago, I received an invite from a college buddy saying that we should meet up in UP TC. Without any hesitation I said yes. Why? The fact that the place is only 7-8 minutes away from my house and that we usually meet down south (read: moa, cavite, moa!!!), this is definitely a welcomed change of pace. LOL! Ang layo at ang trapik kaya going to MOA and Cavite LOL!.

The place isn't that big, mind you, and you could actually go around it in less than 5 minutes. I believe that they plan to make other buildings at the back to further make use of the space and get some more stores in there. So far only less than 1/4 of the place is built.

Enough about the place. We came there for the food.
Since most of my friends haven't tried IHOP (click), we went there for a bite. 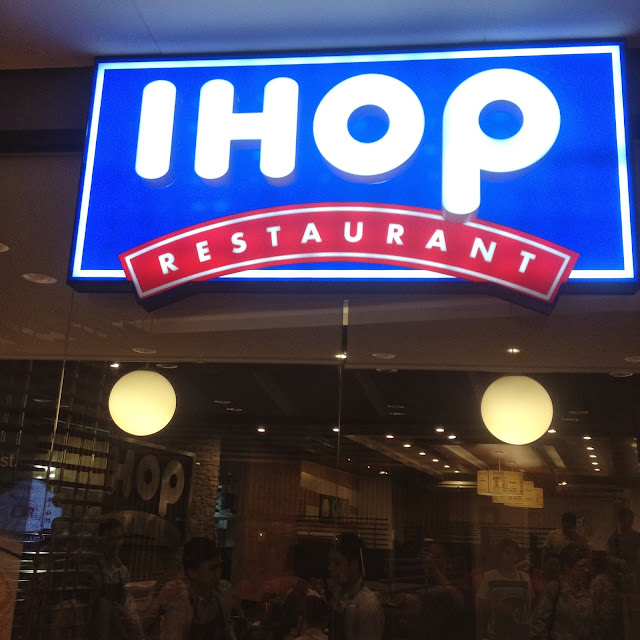 Even if I was the closest to UP Town Center, I was the last to arrive. LOL! I got in just when they were about to sit down.

I totally miss these guys because its been so long.

Especially my cousin D (not really but we have the same surname)...! LOL!
The place isn't huge. I believe around 70 could fit inside while they have a few tables outside. 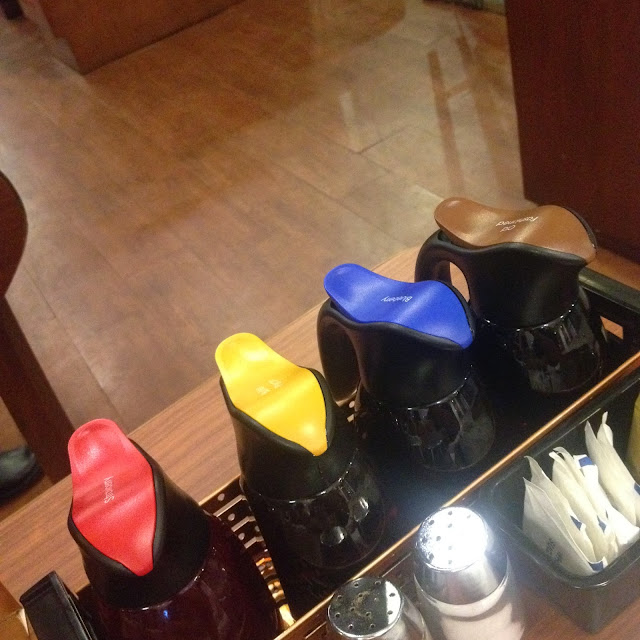 As usual, they offer different kinds of syrups for your pancakes and what not.

I got to commend the staff because food delivery was fast and the service was okay. After 10 minutes of waiting, our food got their way to our table.

Sadly, one of our plates had an unwanted visitor.
See the pic bellow? It was blurry for a reason. It had a creepy crawler! 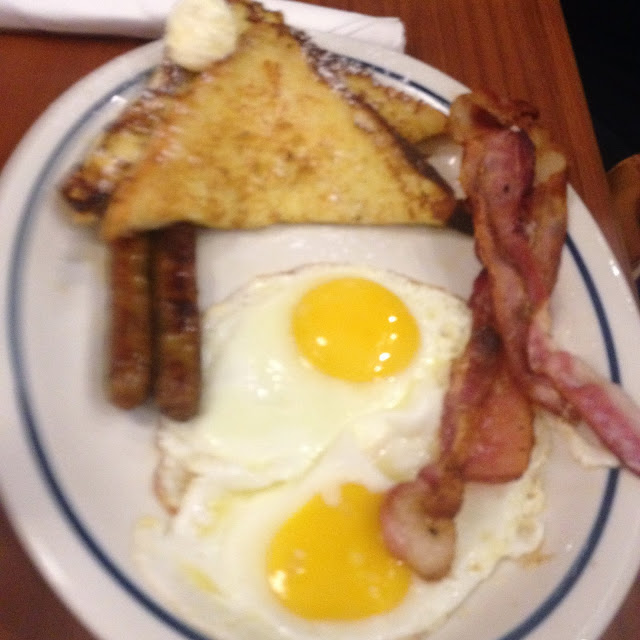 There was a spider chilling on the toast! Grabe tong Split Decision.. IKR! OMG!
We called their attention and got it changed asap. I guess we could have demanded that they exclude it from our bill but it stayed there. LOLs!

We also got their omelets. Actually 2 of them. 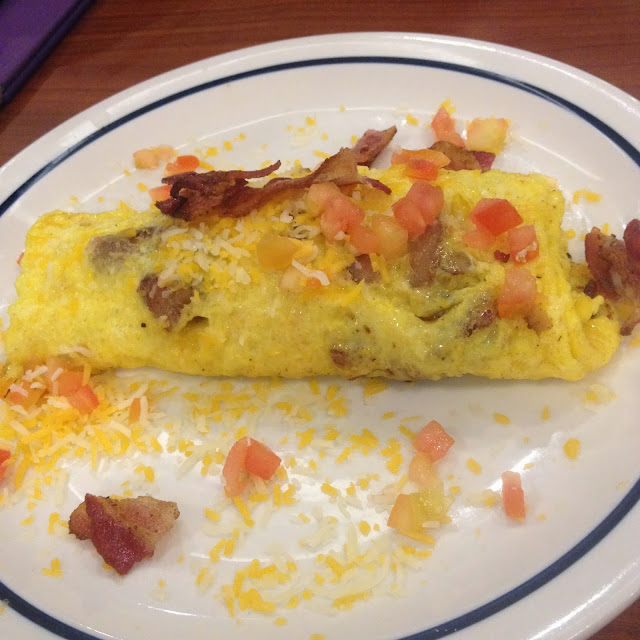 The first one was bacon based. As you can see, their bacon needs a little more umphing! Parang pagod sila na nasunog sa gilid gilid pero soggy at malambot na makunat. Hmmmm.I would have wanted bacon to be more definite. Either it is soft and soggy or crunchy but it can't be in between.

The other one was a little more "health conscious". 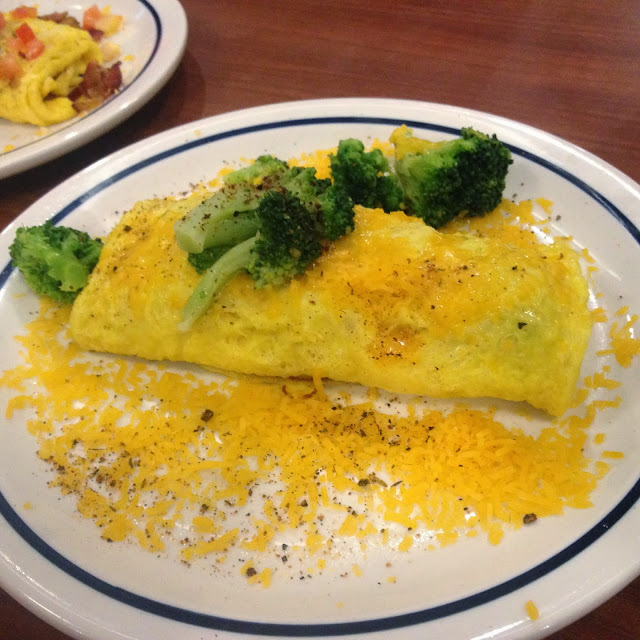 According to D, the broccoli was overcooked. Sad! As what she said, they should have dipped them in iced water after to retain their crunchy texture. Ayun soggy ng bongga.

My friend C got their cheese steak sandwich. According to him, it was okay. 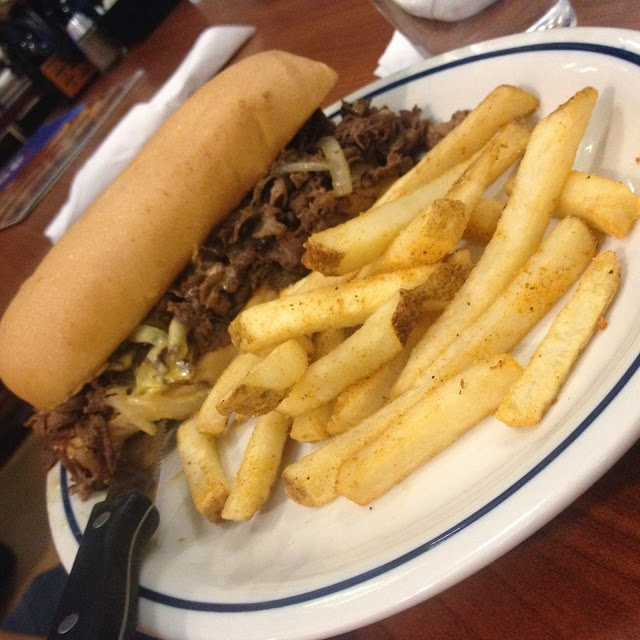 B wanted to try everything so got this breakfast sampler. In fairness parang lumalaki kahit papano ung sausage links nila. 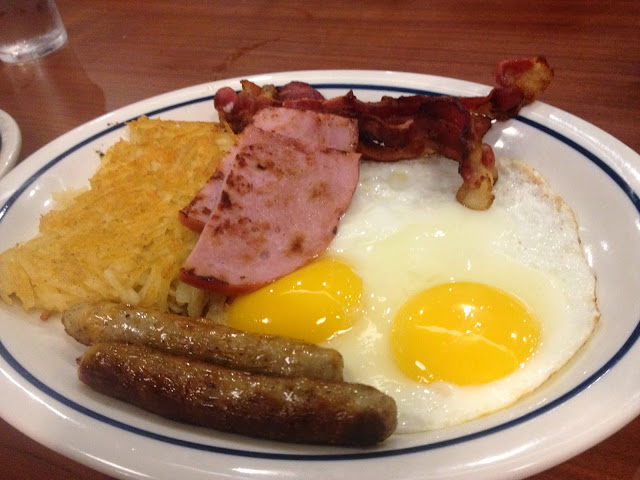 I, on the other hand, wanted to just get some hash browns. Our server suggested to give it a little more dimension. 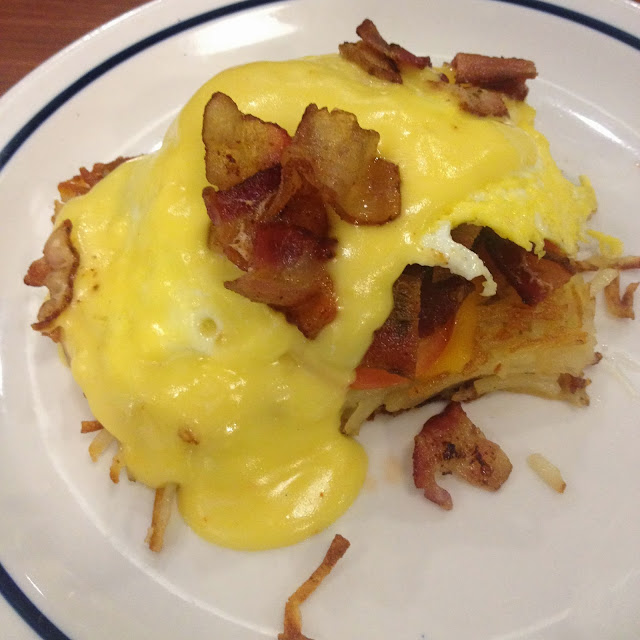 So, I had mine with some hollandaise sauce, bacon, tomatoes and eggs.
It was more of an eggs benedict but instead of bread it was on hash. I liked it but as with all IHOPS.. Too oily!

For side orders.. my friends got their pancakes upgraded. 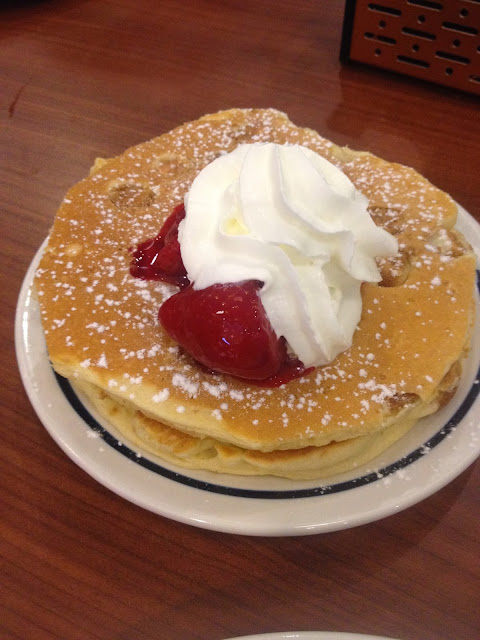 It would be nice to note that their strawberries were huge and didn't looked like it came from the freezer. 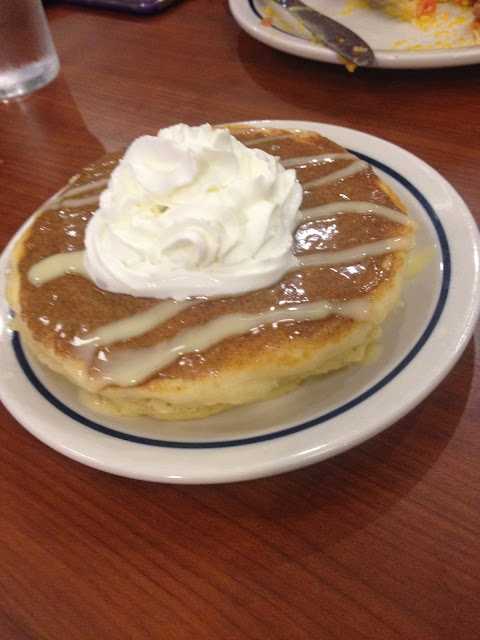 My order also came with a choice of pancakes but I didn't like theirs the first time so I just had toasts. 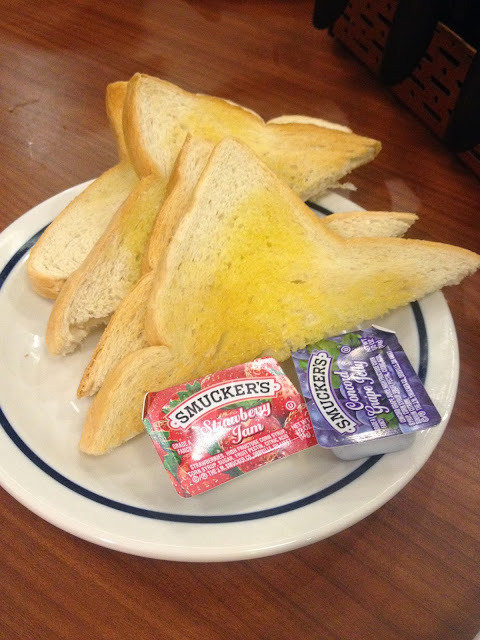 Most of us couldn't finish everything so we had them wrapped up. 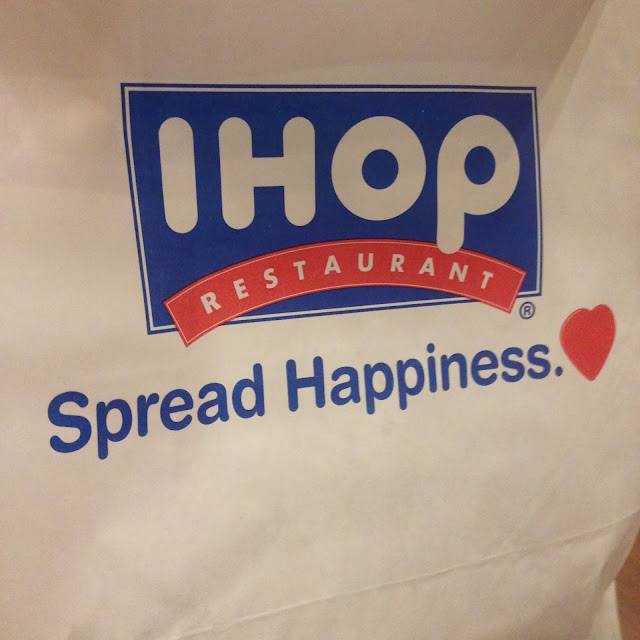 One thing we noted was that the food was nakakaumay and too oily. The pancakes weren't really that great either. Maybe next time if you are planning to go to IHOP, just order their other meals rather than pancakes. LOL! Budget around 500-600Php.

Afterwards, we roamed around. Since kasama namin mga girls... GEEZ!!!, it became a bros night out.
G, C and I went around the place and let the girls bond. LOL! Actually, we left them standing around while we got to see the place. (OP kaming mga boys!!) 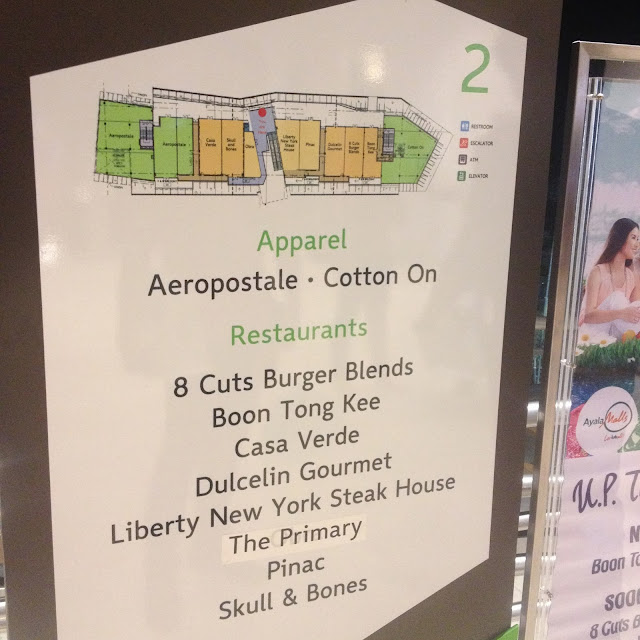 Its great that the place is a food heaven. One could literally do a food trip here. I believe there are only 2 apparel stores (cotton on and aeropostale) while the rest are all restos (aside from family mart)! 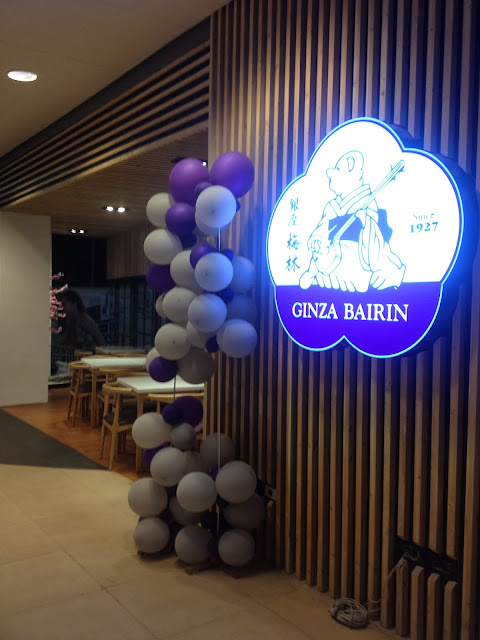 J CO is already open and thankfully the line isn't like the one in Tinoma or Sm North. I also got to try Steveston Pizza and would do a post on it later. What I am really waiting for is another Borough. They plan to have one in the future (another 24hour joint closer to home.. hello milk and cookies and cocktails and more yum yum stuff!).

After going around, the girls finally saw us standing near the front entrance, they went on over and voted on where to go next. BAM!! They went on over to Vanilla Cupcakes. Us guys, being op (that's out of place for you !), just went somewhere else to get hot drinks.

There wasn't any Starbucks but rather they had Highlands Coffee. 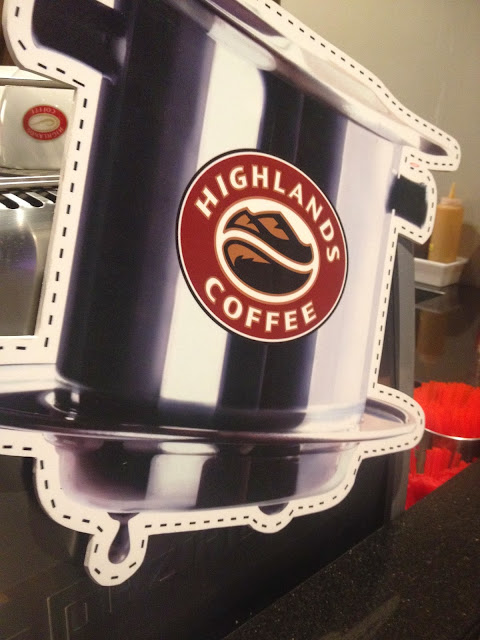 It was something different from other coffee places because its a Vietnamese coffee shop. They specialize in
drip filters and even offered Bánh mì and croughnuts. Since we were still full, we just ordered drinks. I didn't want a hot one so I just went with an iced caramel macchiato.
For the price, it was sulit. The flavor just right. 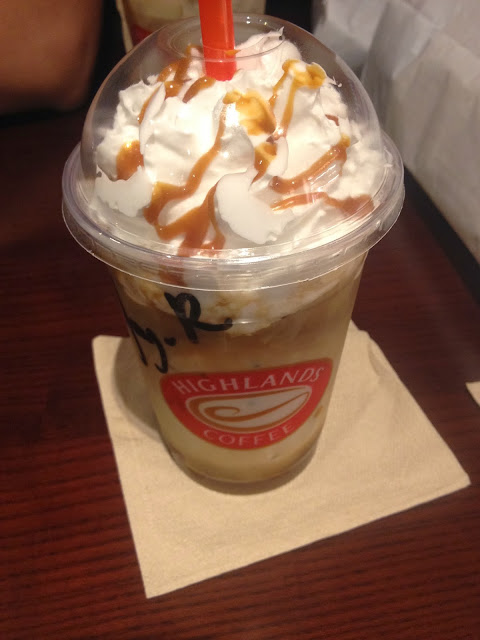 Yes it was iced but they added some foam to it. I guess I'm a little bit sanay to SB's version.

Here are the drinks they offer: 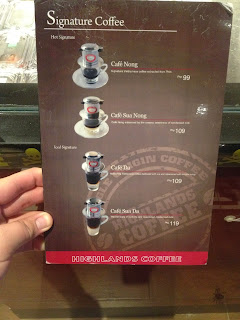 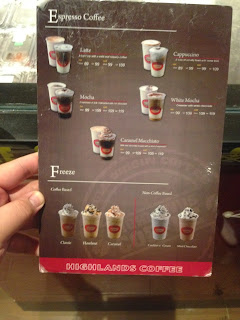 Even after all the coffee and the guy talk we had, the girls were still in Vanilla Cupcake. Thankfully, it was close to midnight so after a picture or two, we all went our separate ways. Whew! 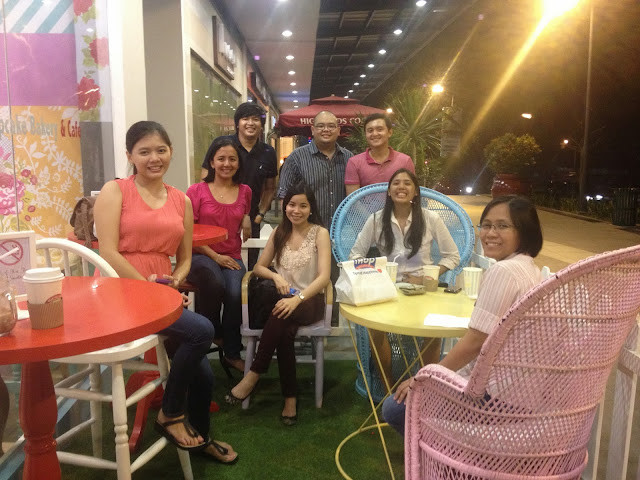 UP TOWN CENTER,
Along Katipunan, Quezon City.
Situated in the former UP Integrated School. 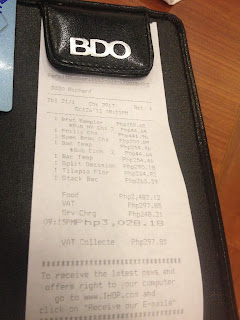 Disclaimer: I wrote this based on my opinion. I wasn't asked nor was compensated for putting up this post.