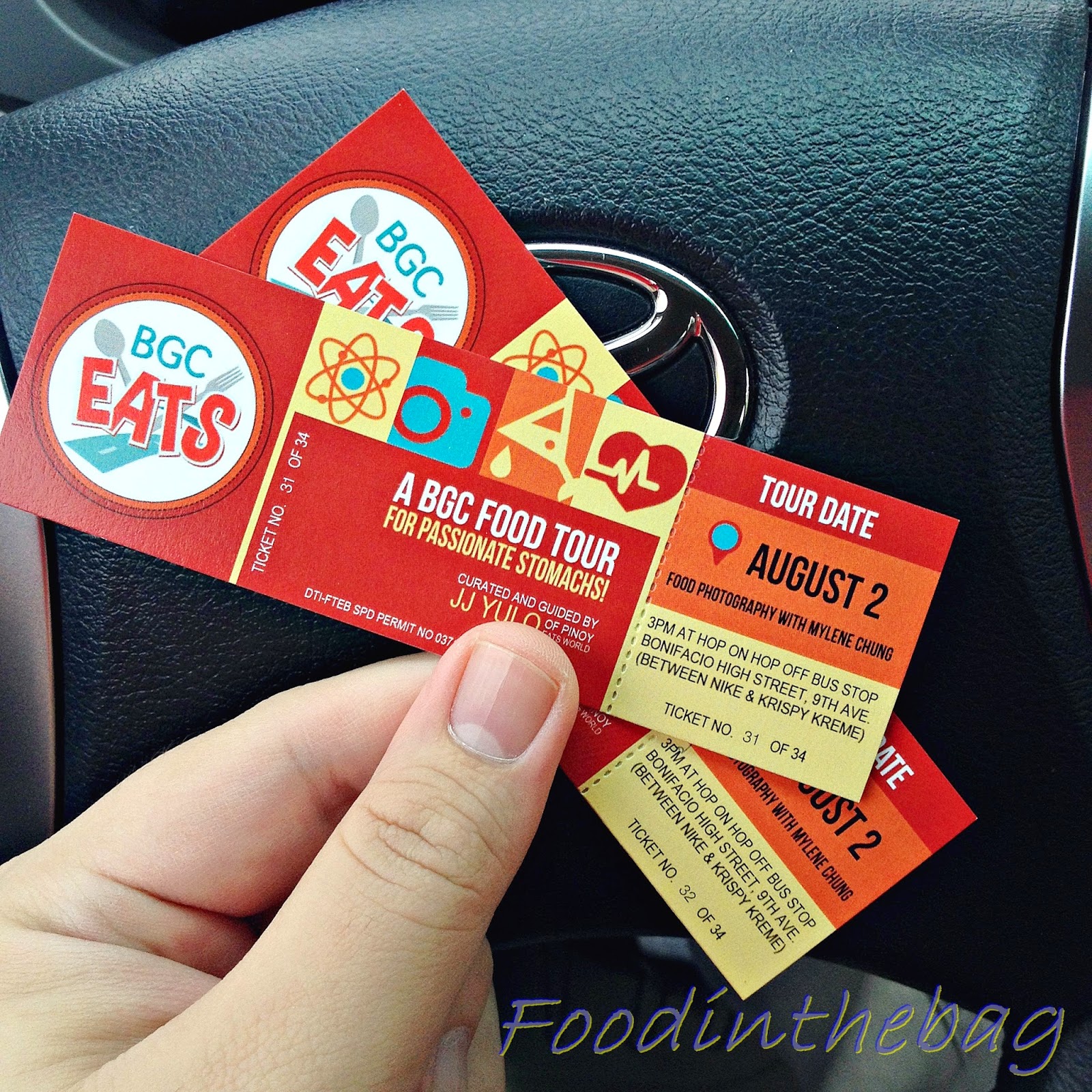 When I saw the posts, I knew I just had to get some tickets. I had been able to join the 1st one a year ago so I thought, why not join this one too. (LAST YEAR'S experience: CLICK HERE)

Getting to BGC was a bummer as C5 Traffic was definitely horrendous. Mental note, use EDSA on a Saturdate!! Thankfully, I was able to get there a good 15 minute before the 3pm call time.
Big shot out to Manong Marshall for not giving me a ticket!!!**There are new one way streets in BGC!!! ARGH!!!! Anyway..... I was greeted by my friends at the bus stop and we boarded exactly at 3pm! WHEW! 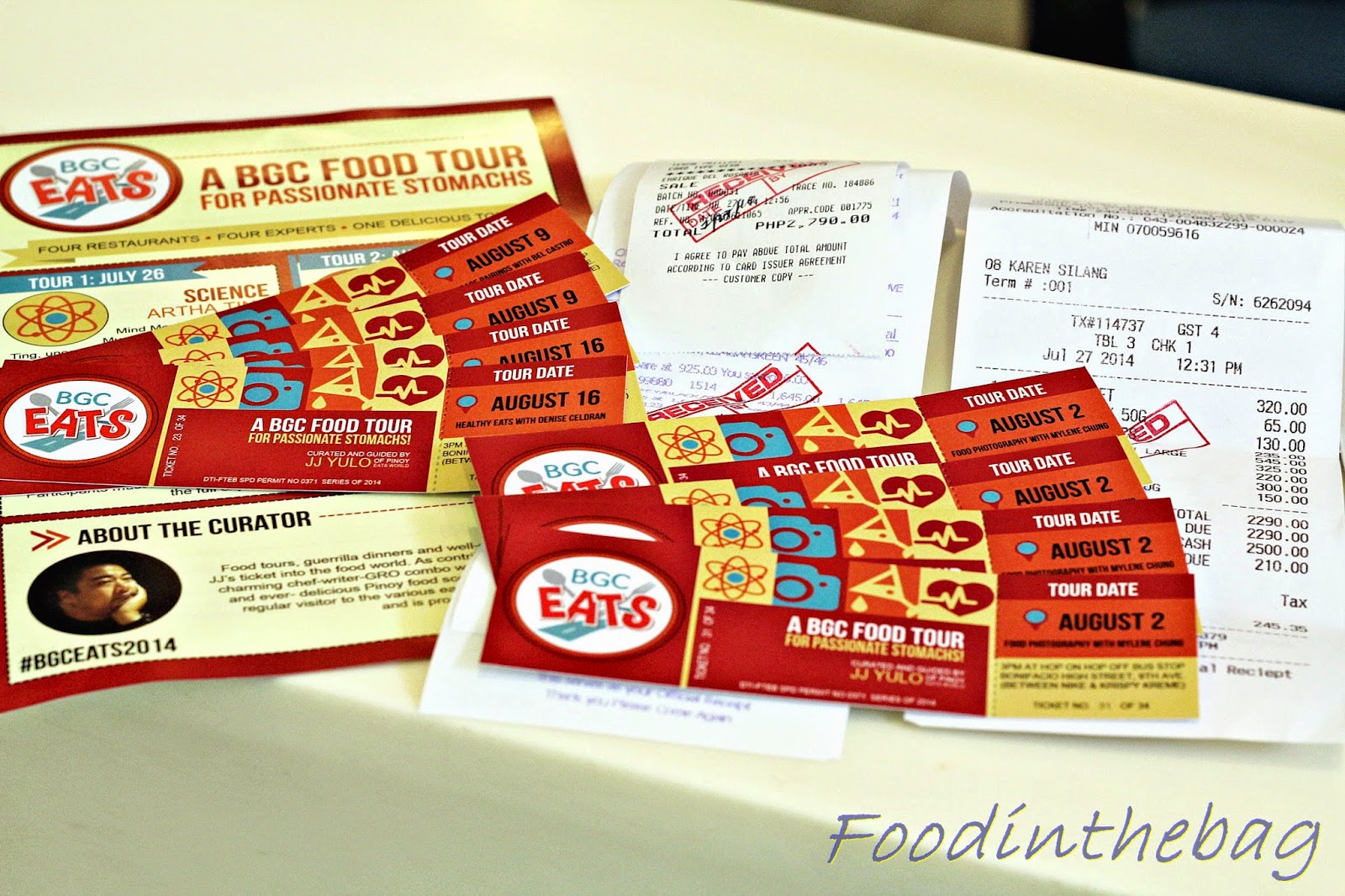 Thankfully, I was lucky enough to be blessed and have "hoarded" a bunch of tickets... (in retrospect, I forgot to redeem another pair of tickets.. and when I checked ... low and behold all the tour dates are filled up!!!)


Curated by awesome tour guide, JJ YULO, you won't be disappointed with the experience. Just like last year. What's new in these year's tour? Well they got a bunch of guests that gives a different dimension to the experience. For the August 2, 2014 batch, we were welcome by Ms. MYLENE CHEUNG of Pepper.ph and PhotoKitchen.  You see, the theme was FOOD PHOTOGRAPHY! YAY!!!! One of the things that I really need help on.

After getting on the bus , my friends and I were whisked away to our 1st stop. 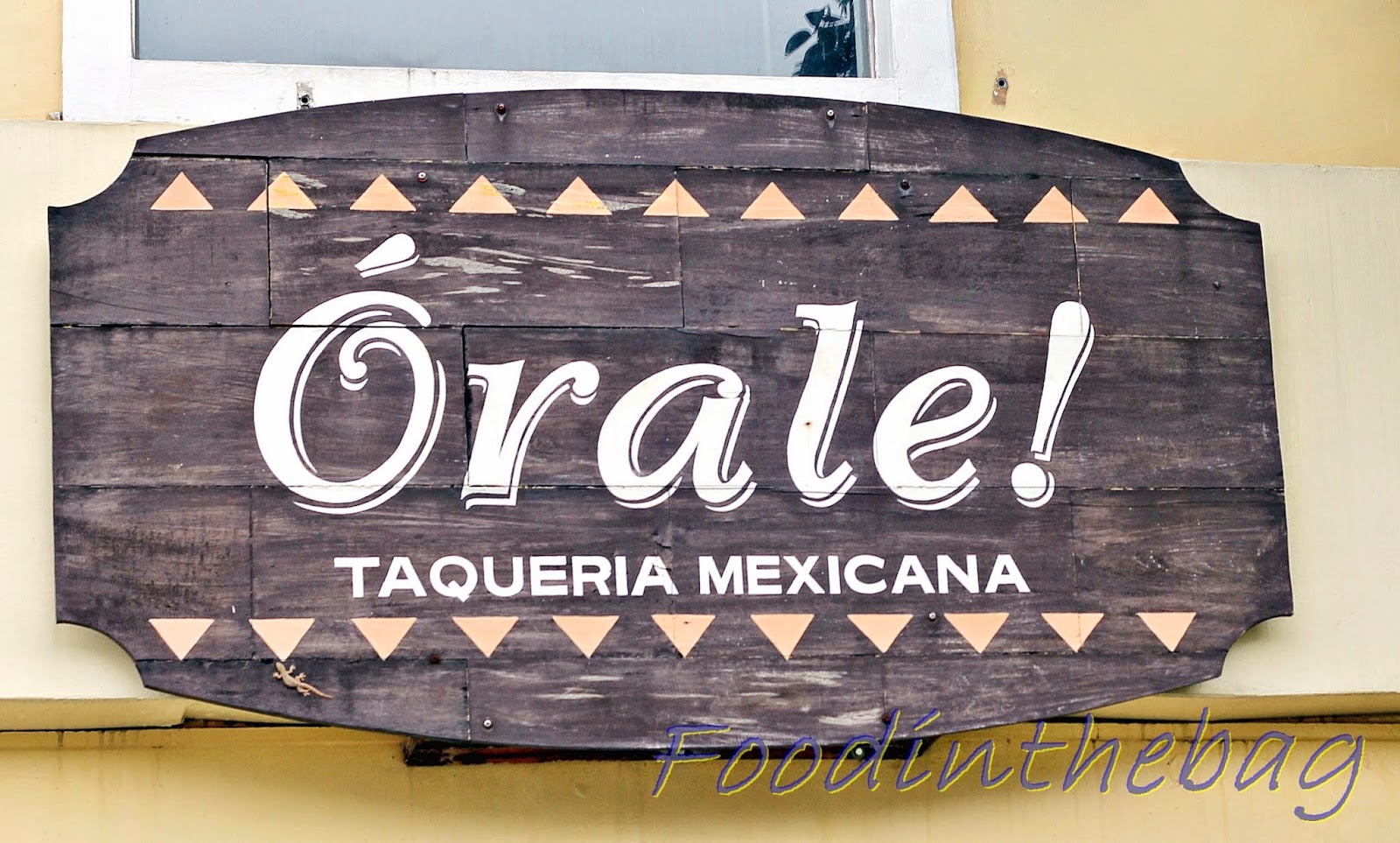 Located in the Fort Strip, ORALE! offers a take on Mexican Dishes. The owners of this fine restaurant welcomed us just outside of their establishment. Unfortunately, the place is undergoing renovations and would lightt up in a couple of weeks. As such, we took over a few tables of a different restaurant so that we could try their stuff out.

Here M.C. gave us our 1st tip: TAKE ADVANTAGE OF NATURAL LIGHT!!! Use a reflector!
It could be anything as expensive as something bought in a store to a sheet of clear white paper. 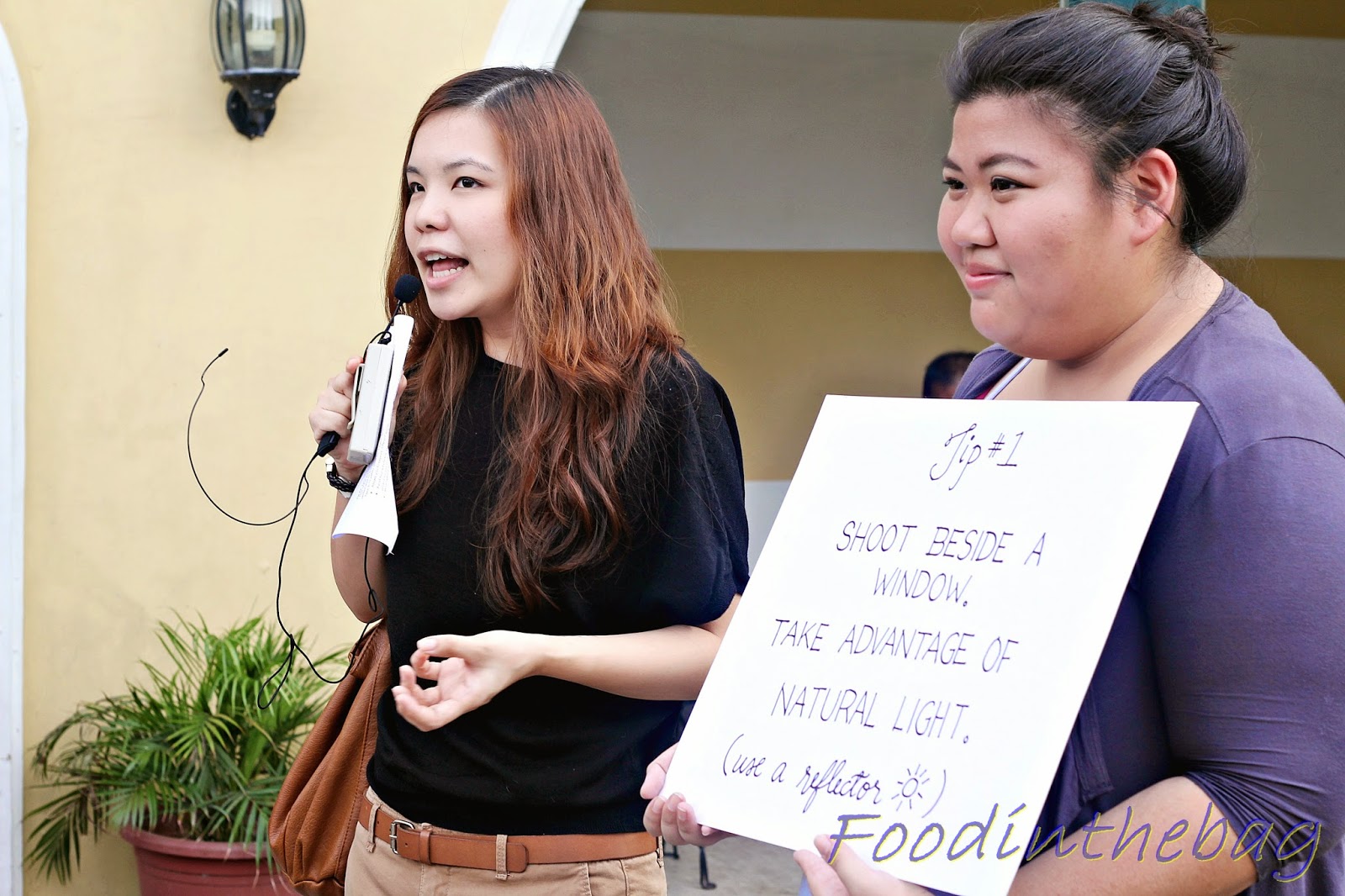 We were able to try out some tacos and beverages from Mexico which we took shots of using a reflector. 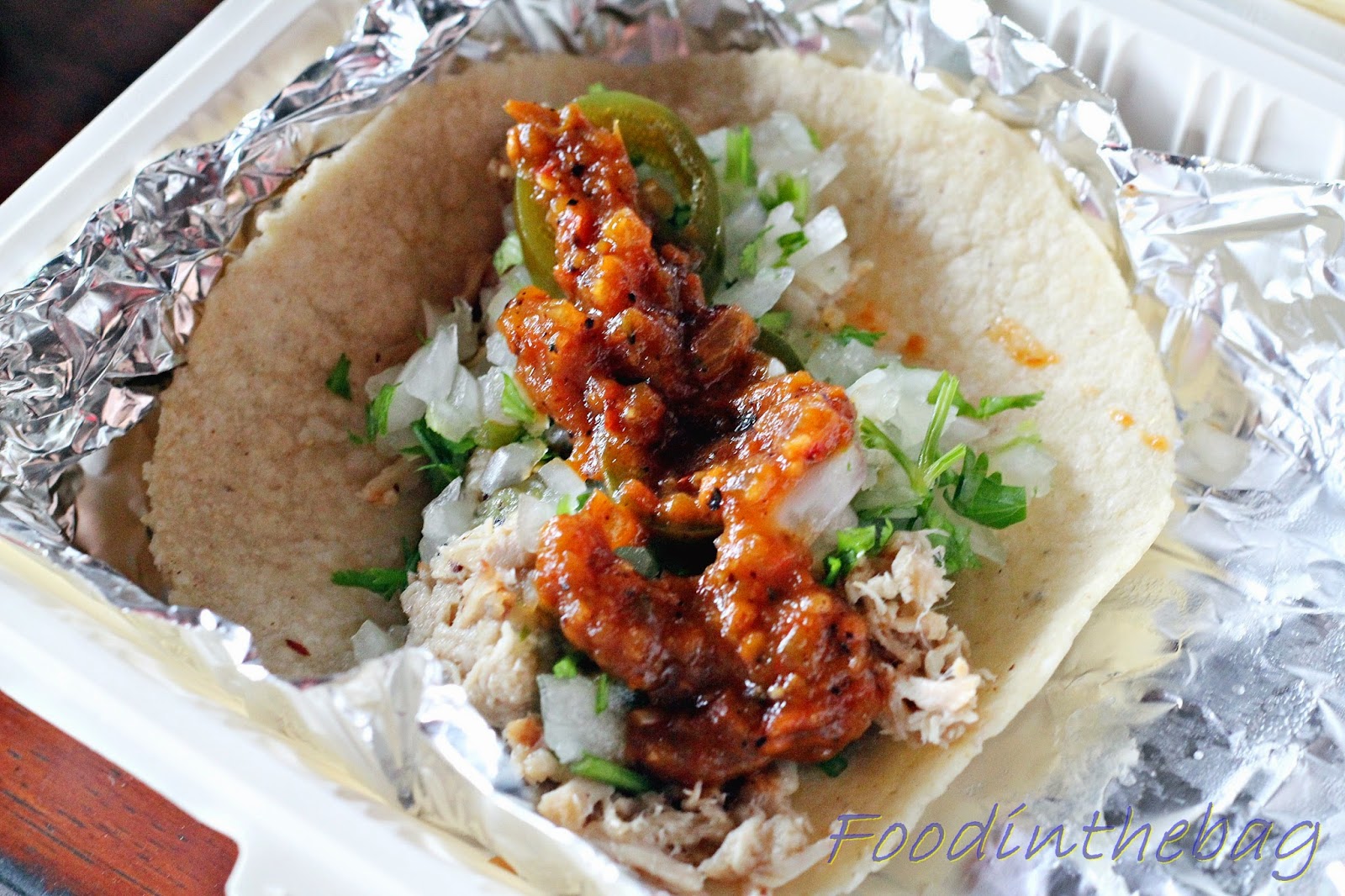 The taco was served with a soft shell and lovely shredded veggies and meat were in it. The salsa was nicely done. Not too hot and just right. Plus the beverage they served, which had lot of flavors to choose from, quenched our thirst. 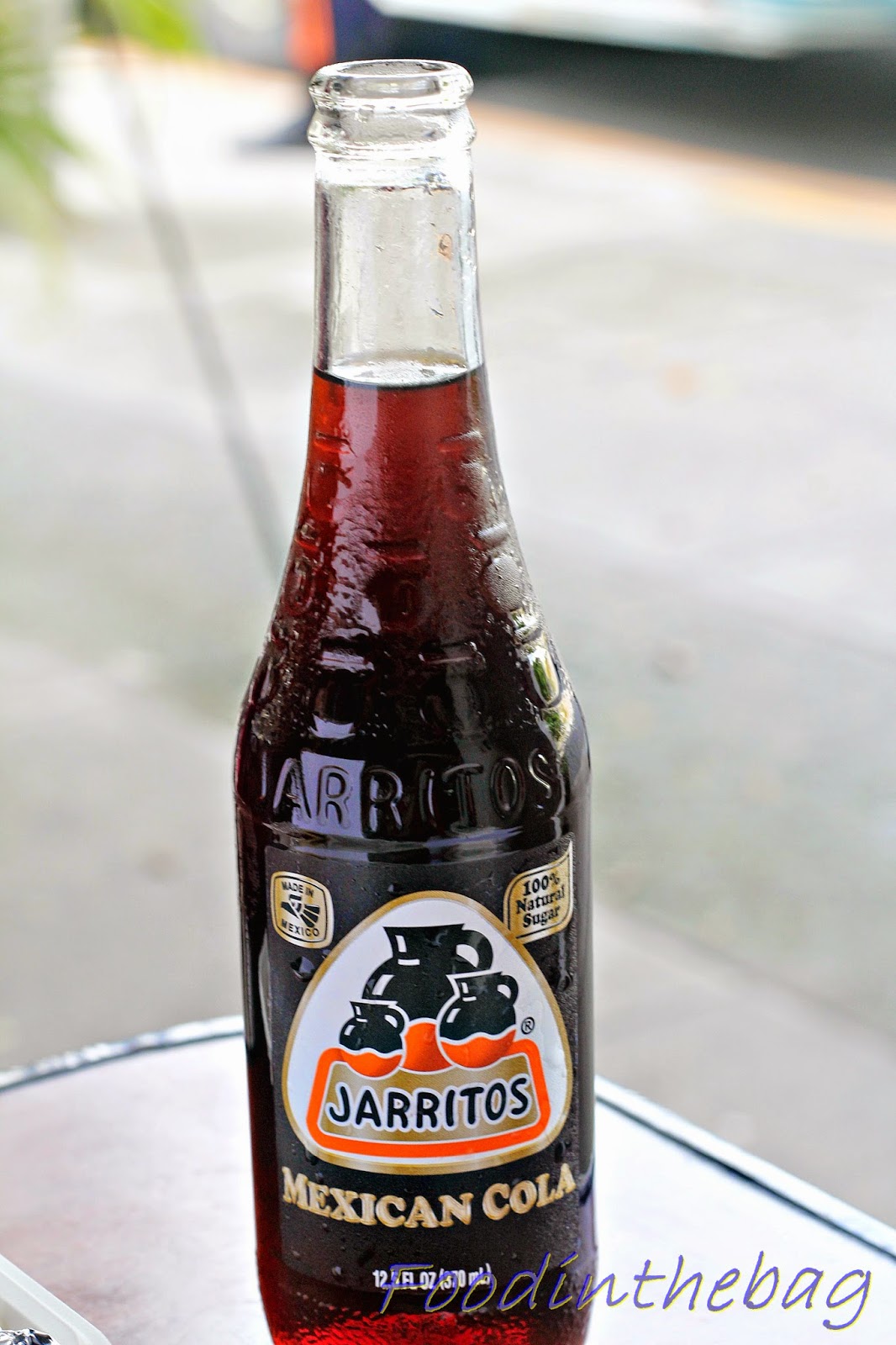 After the roadside snack, we were led to the FORUM. Here we would round up the 3 remaining stops.The next resto on the list was SARSA. Now, I have been to this restaurant more than a couple of times to partake of their glorious grilled meat! You could check out a more extensive experience HERE and HERE.


At this leg, MC told us the next tip: DSLR/CAMERA: CLOSE-UP or rule of thirds and SMARTPHONE: GET THE TOP SHOT. Please don't ask me how the rule of thirds are but to put it plainly, each frame is awesome when you divide it into 9 different parts and emphasizing putting the object on an intersecting line. Of course, rules are made to be broken though. For smartphones, top shots are interesting as you get to put a lot of dishes into a single picture. 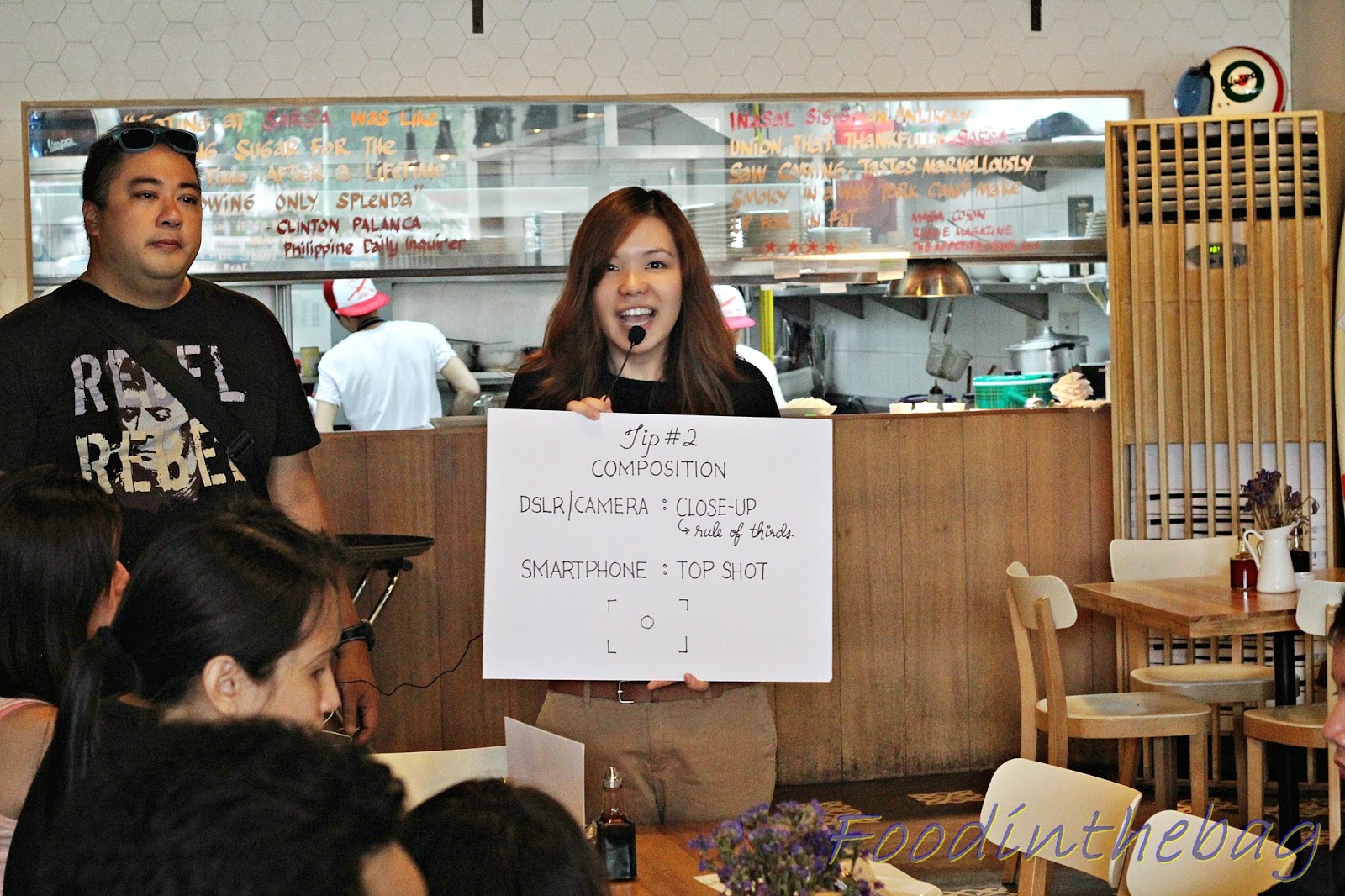 We were served a few of their awesome dishes.PANARA ROLLS. 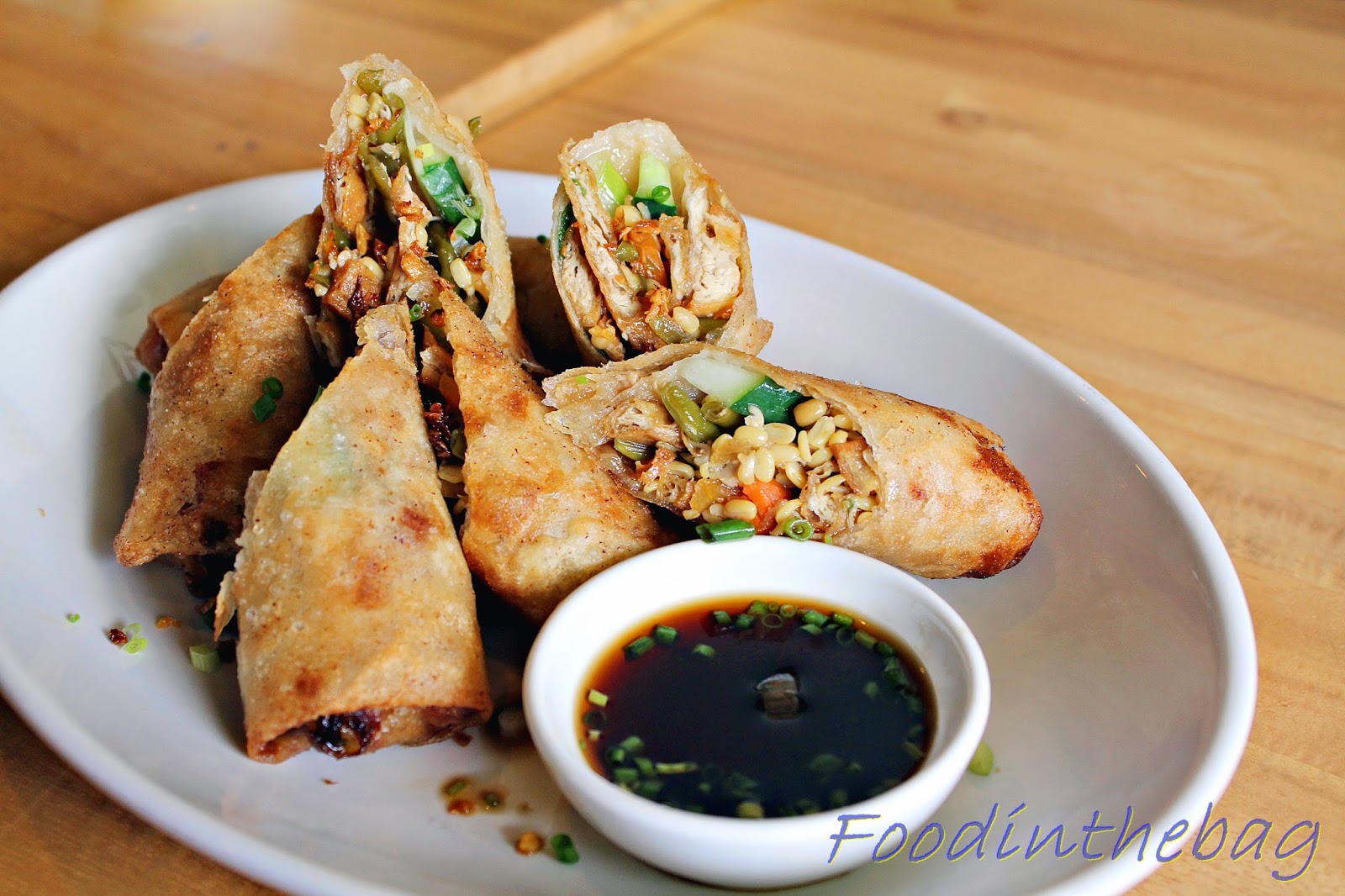 ISAW and BBQ. Love their flavors! 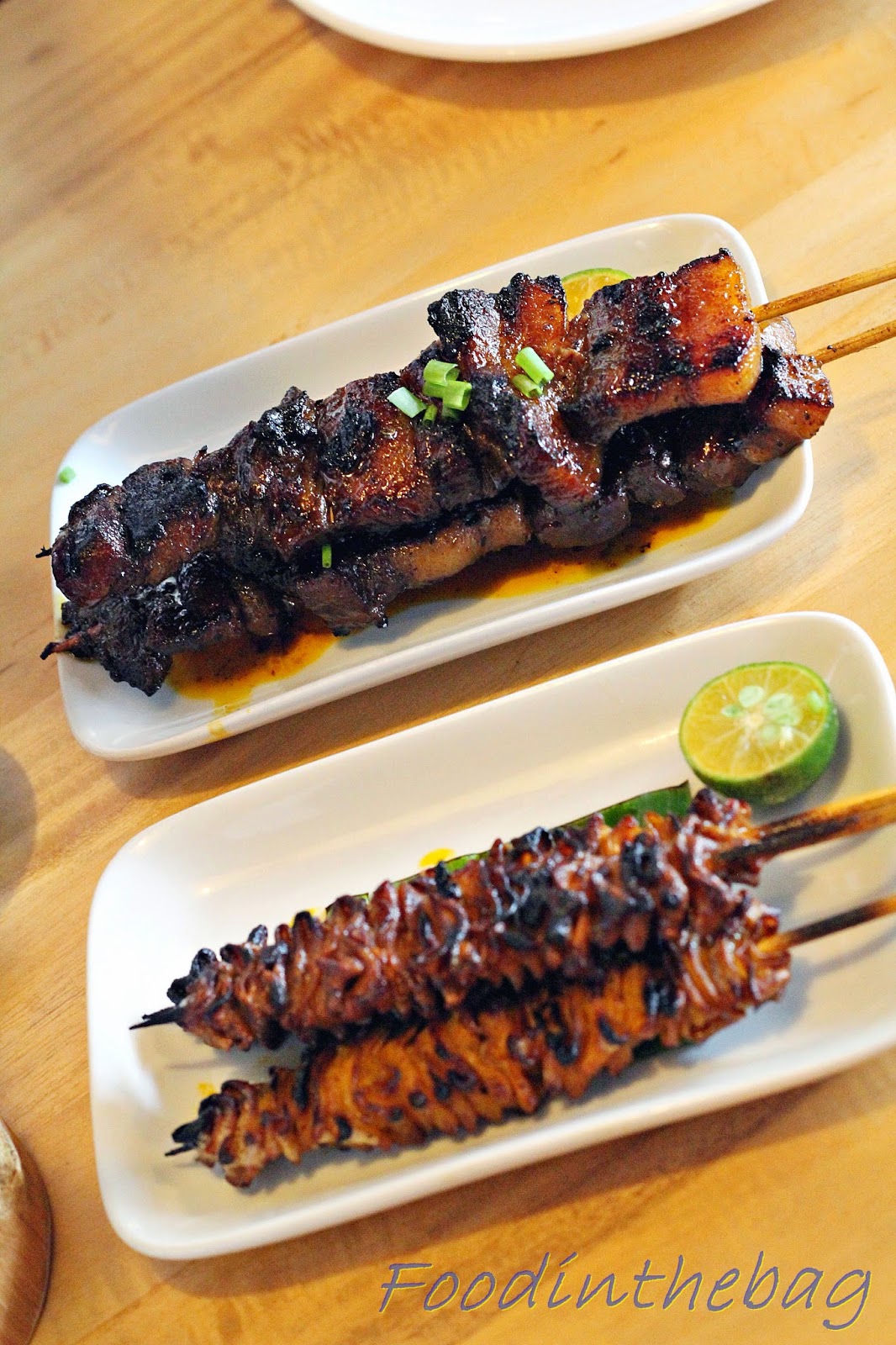 Tofu! Their veggie take on the grilling. 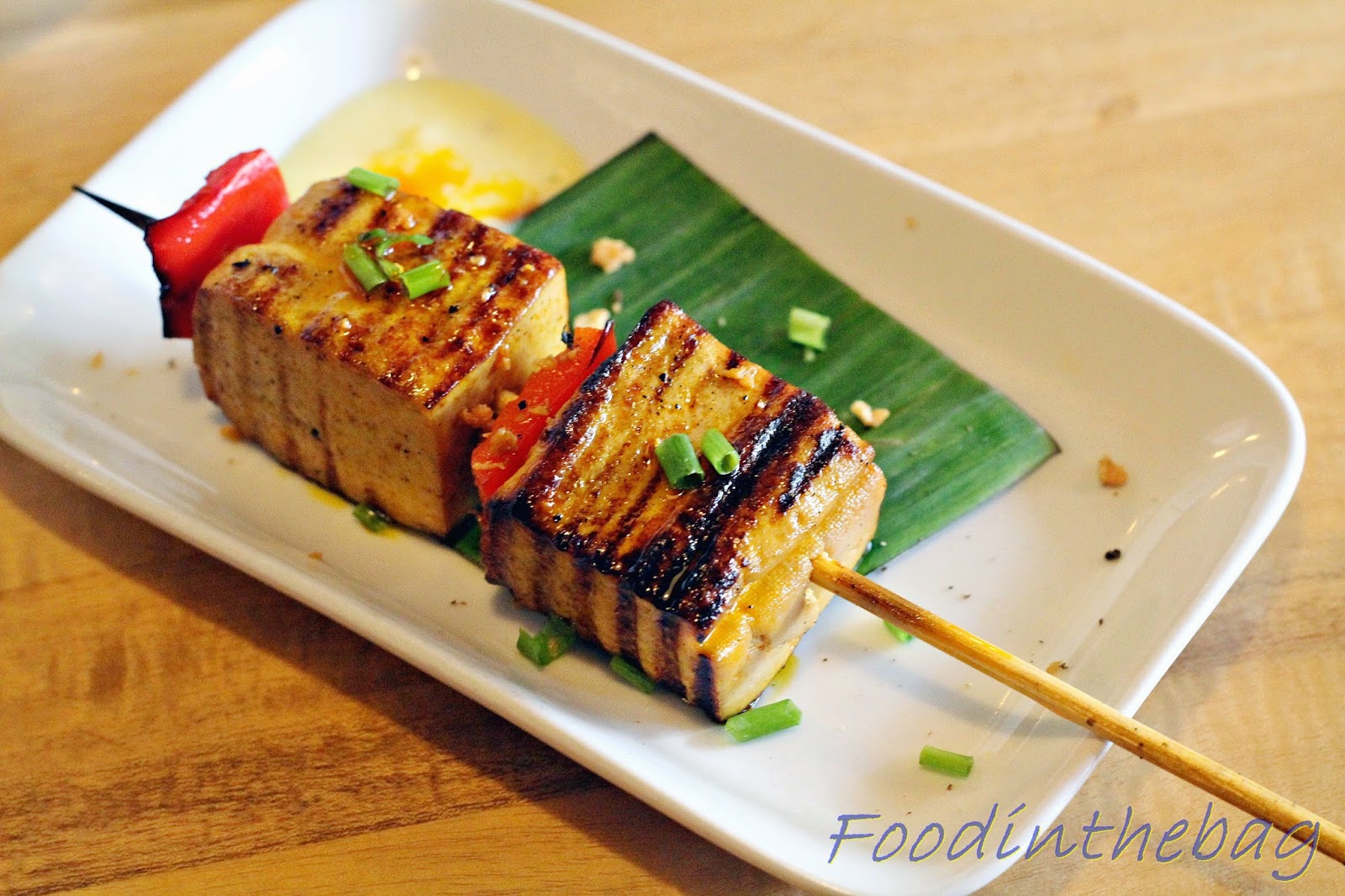 Of course, one of my favorites, their dilis. (see the shadow ? and that's why its better to use a reflector.) 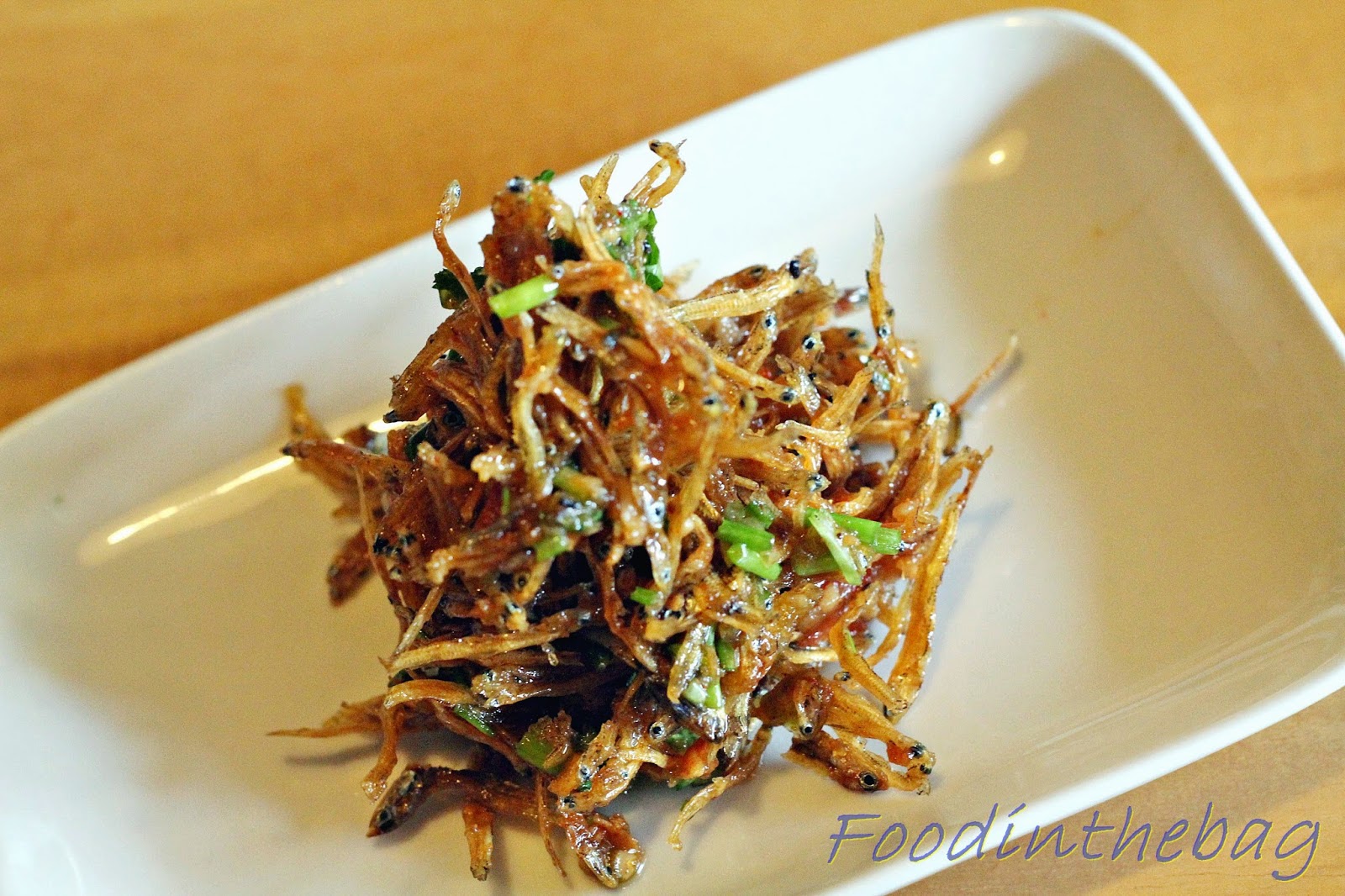 Up on the second floor, we went in TIPPLE & SLAW. A chill out bar that serves grub and drinks till the wee hours of the night morning during weekends. The feel was somewhat dark and relaxing. Awesome stuff were on its wall like: 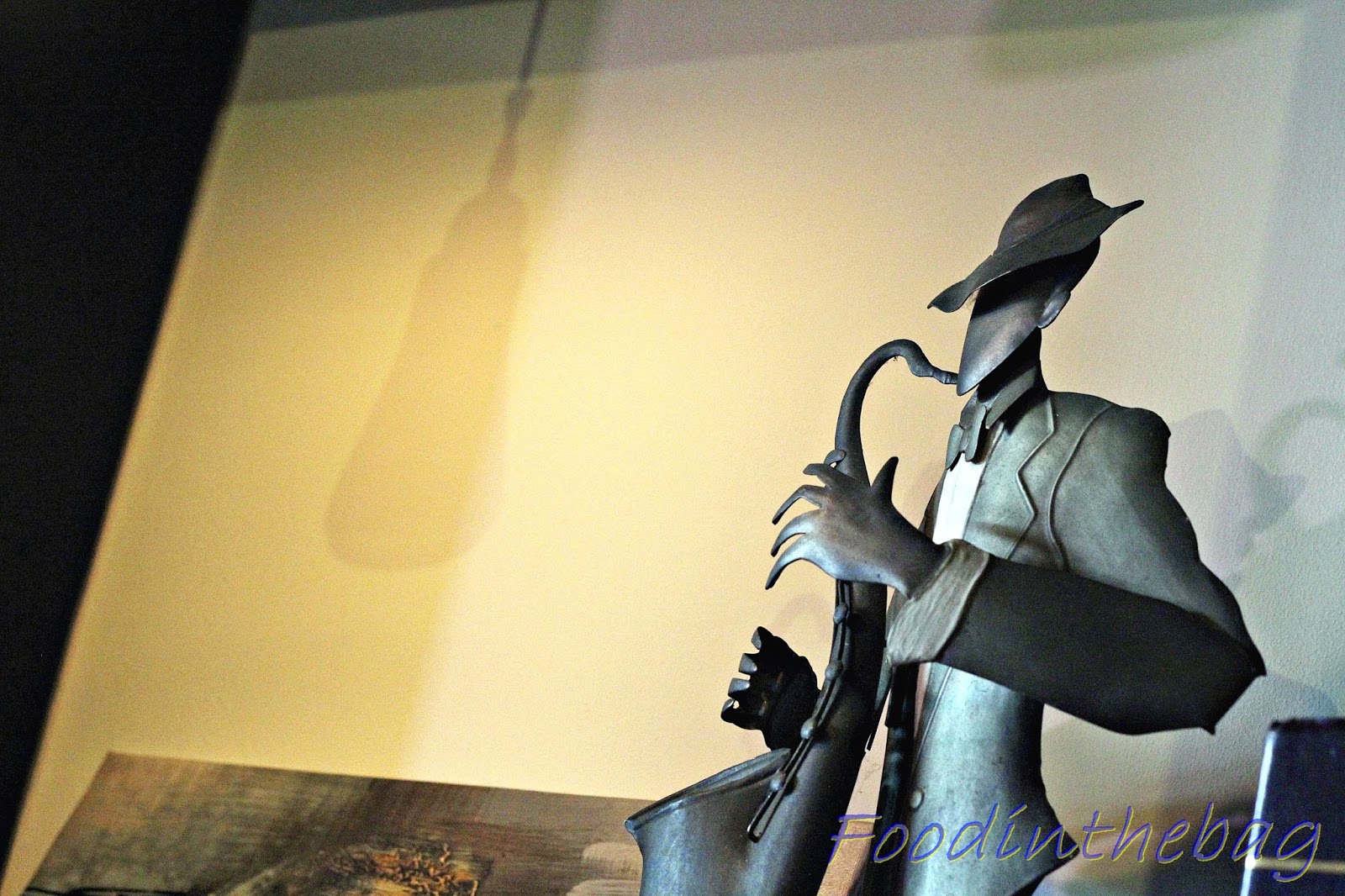 and MAN vs. FOOD's Adam Richman photo as to which the bar has an affinity for. They aim to serve dishes other than the usual rice meals. Best sellers would have to be sandwiches and pica-pica! 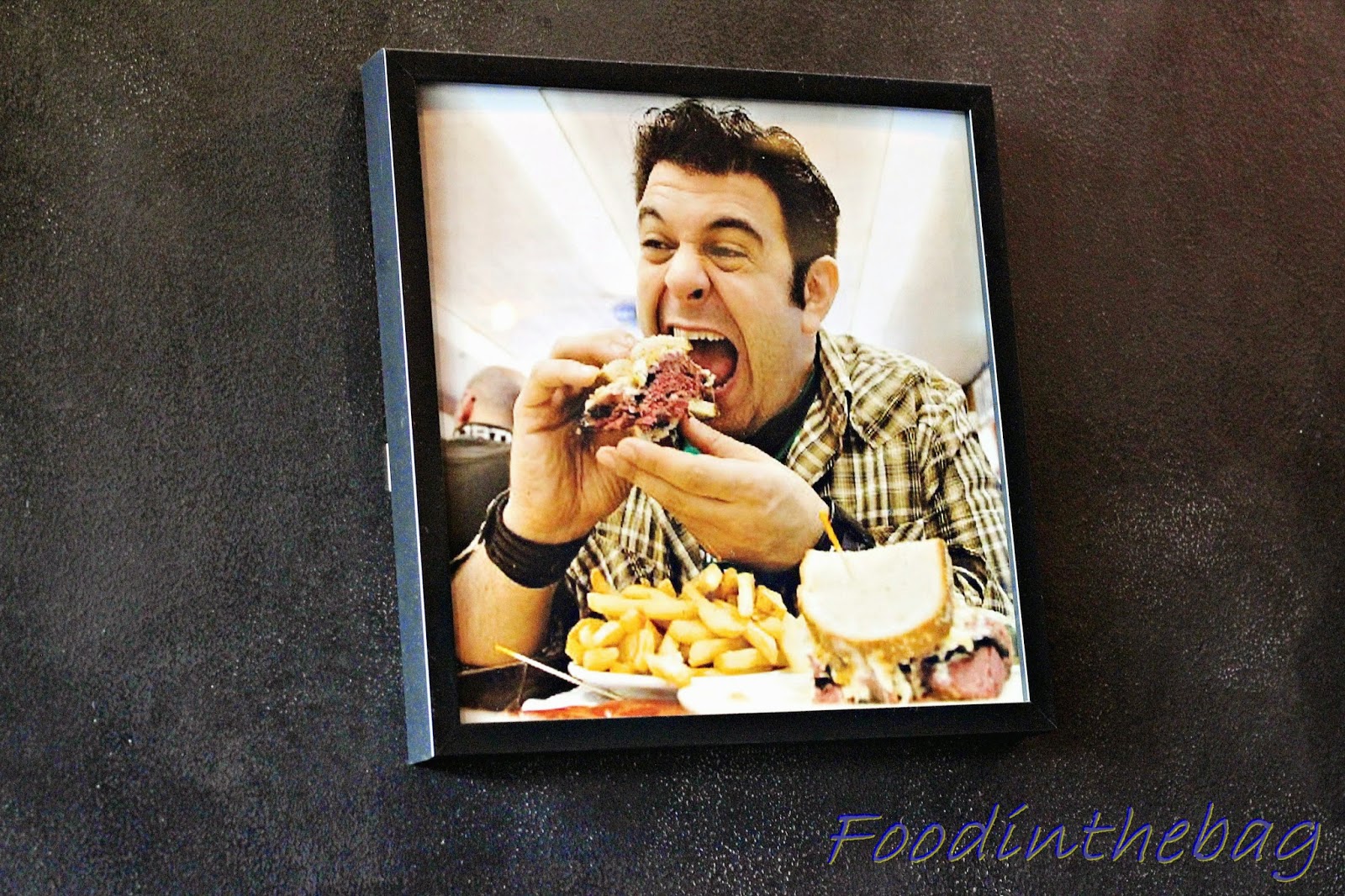 For this 2nd to the last stop, we were given the 3rd tip. TAKE SAFETY SHOTS. Definitely the best tip ever! I am soooo guilty of this when I take shots when I dine out. You won't go wrong with back-up shots. 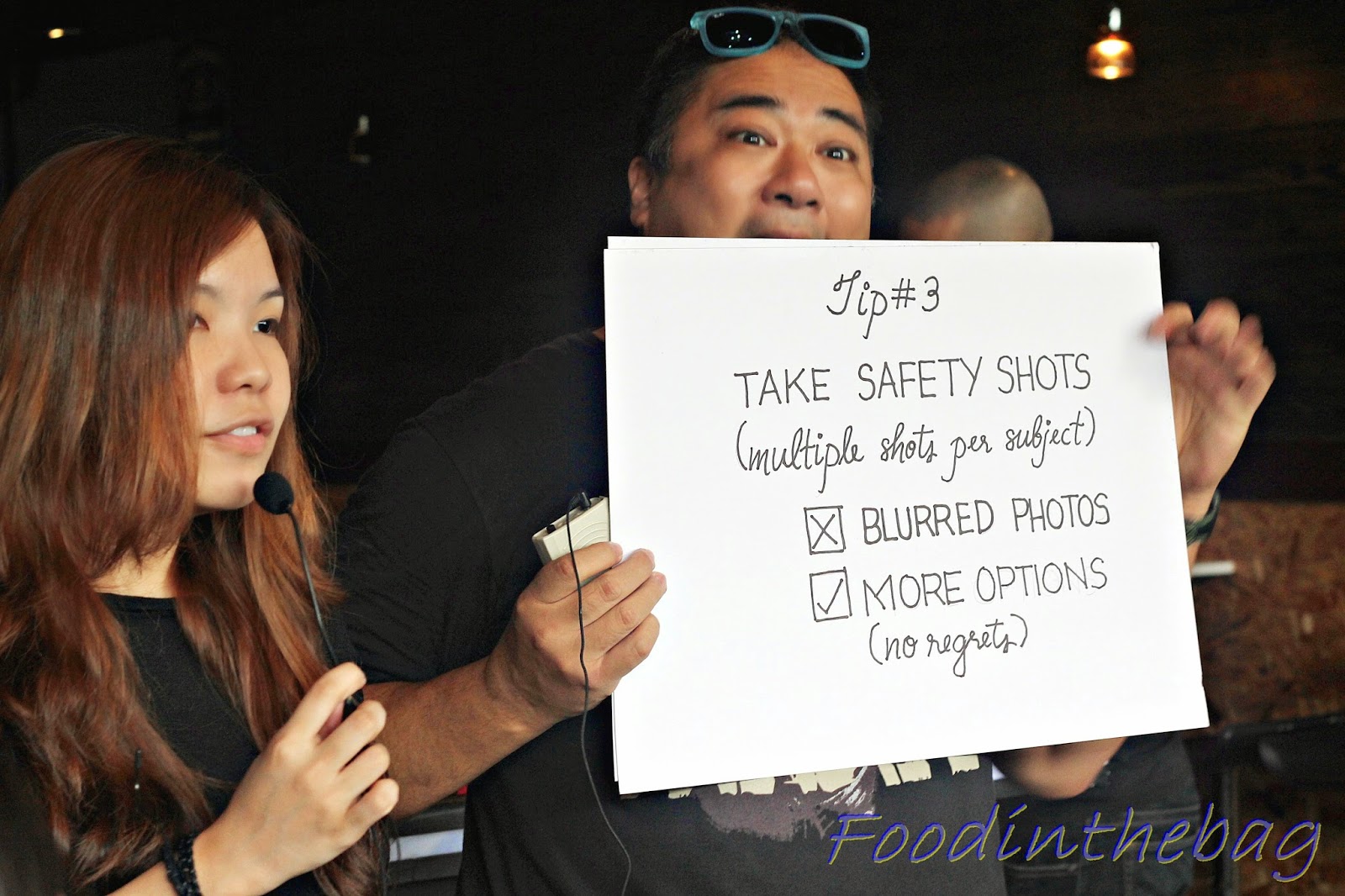 After waiting for a few, we were served some drinks.
ICED TEA, brewed and has a strong flavor but a tiny too sweet for me. 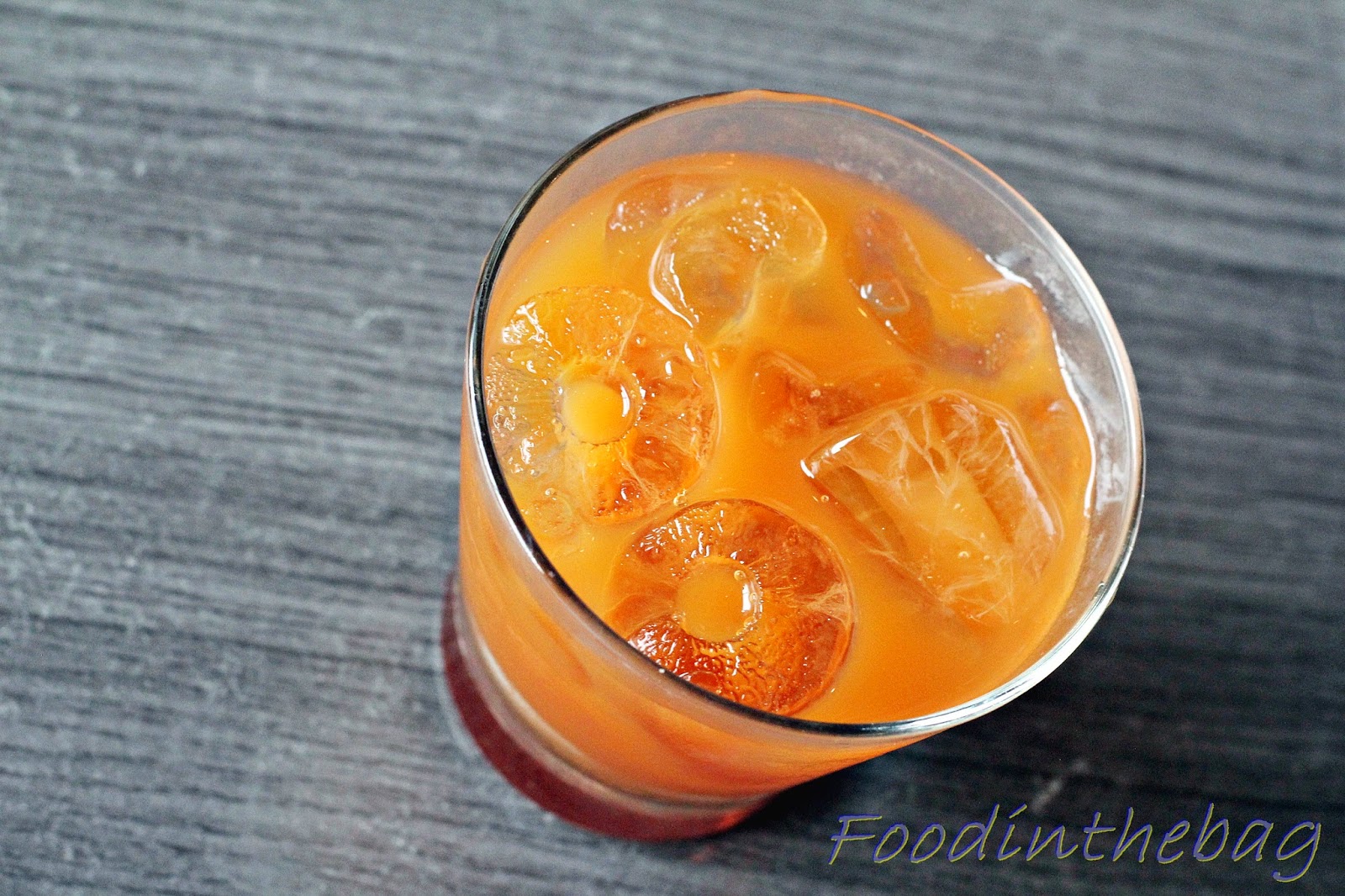 SALMON DIP: Chunks of salmon to put on toasted bread. Not really my type. 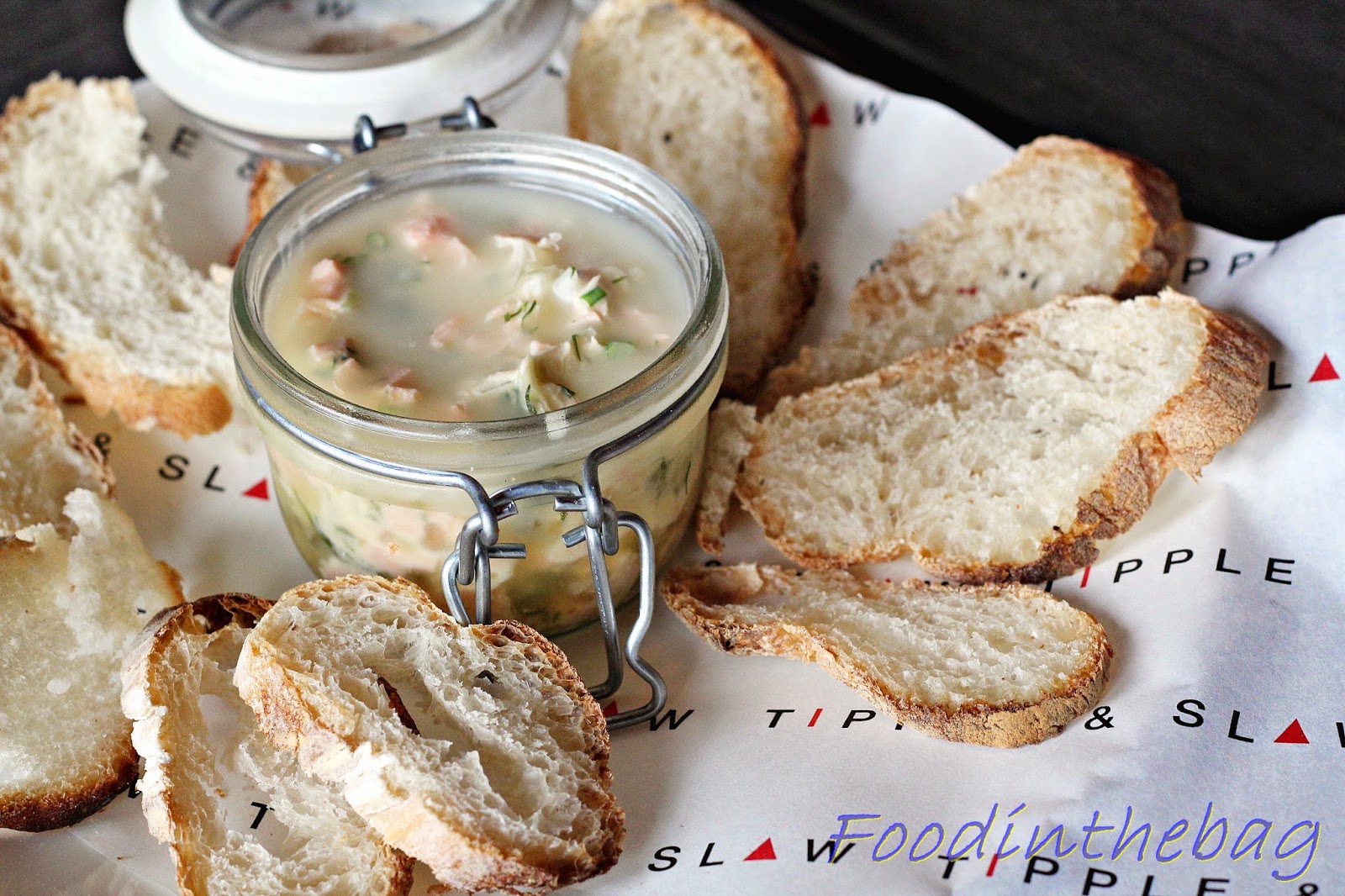 Thanks so much James for the hand!!! 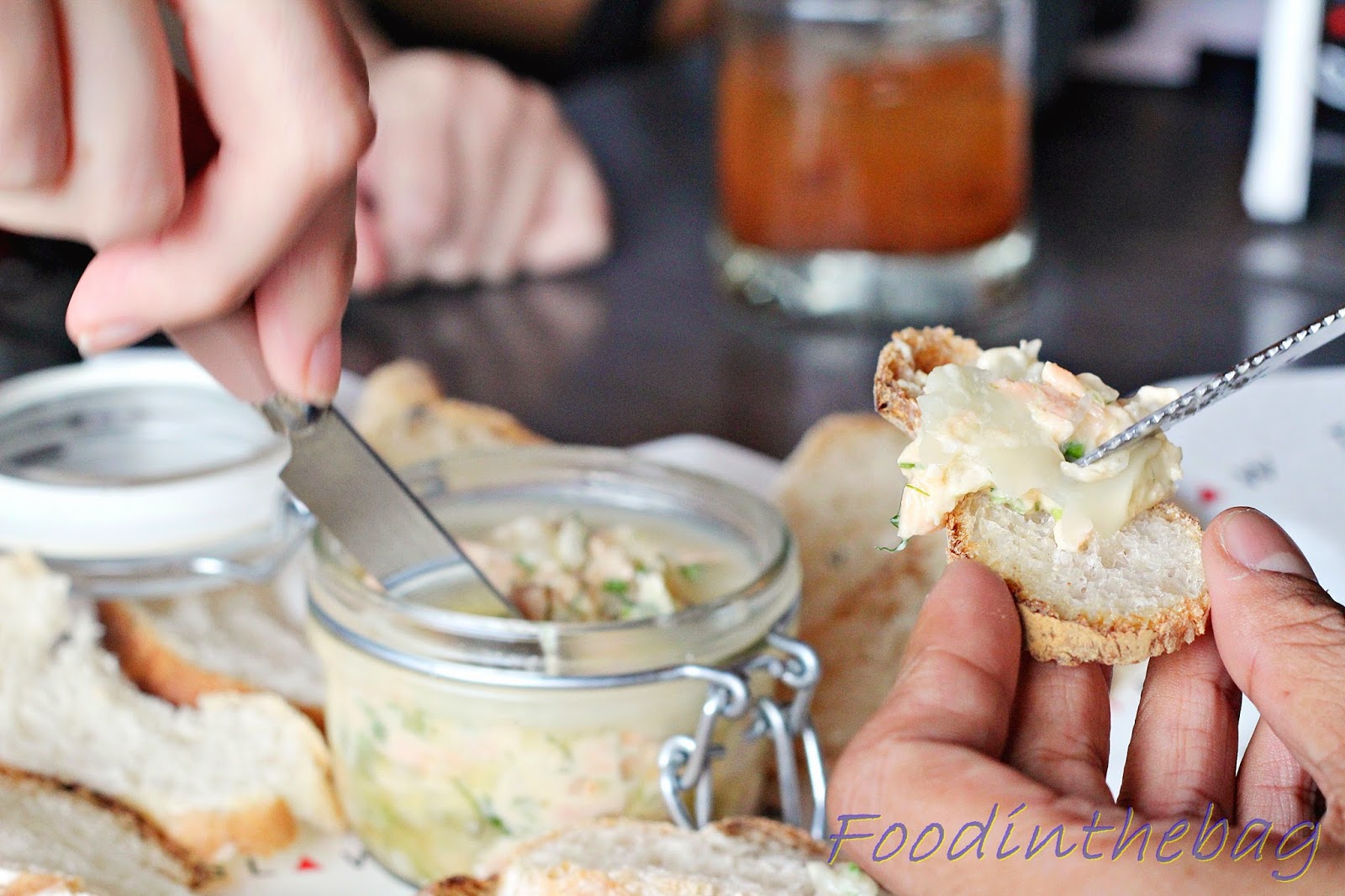 POUTINE with PASTRAMI: The meat was pretty good. Tender! 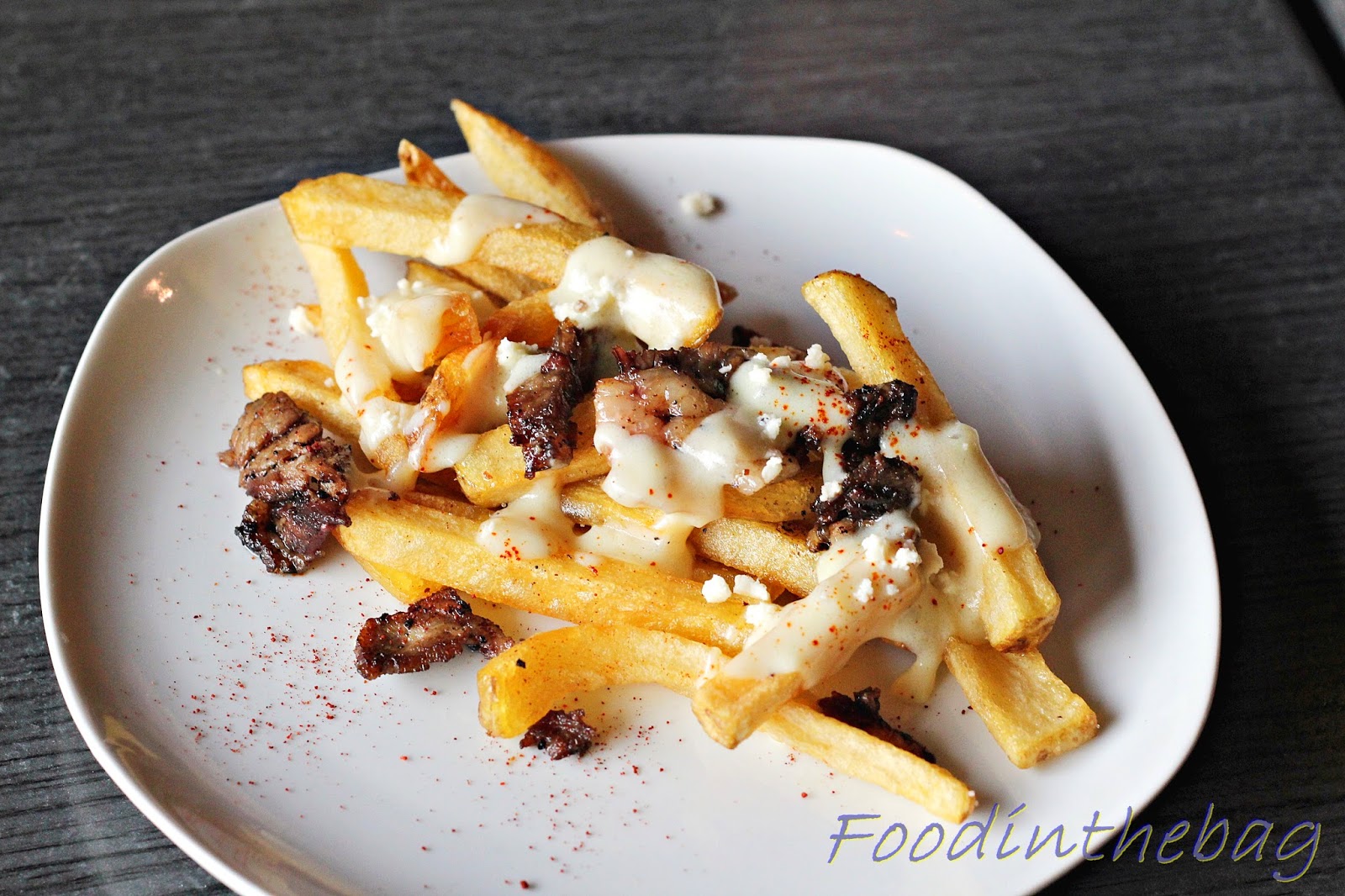 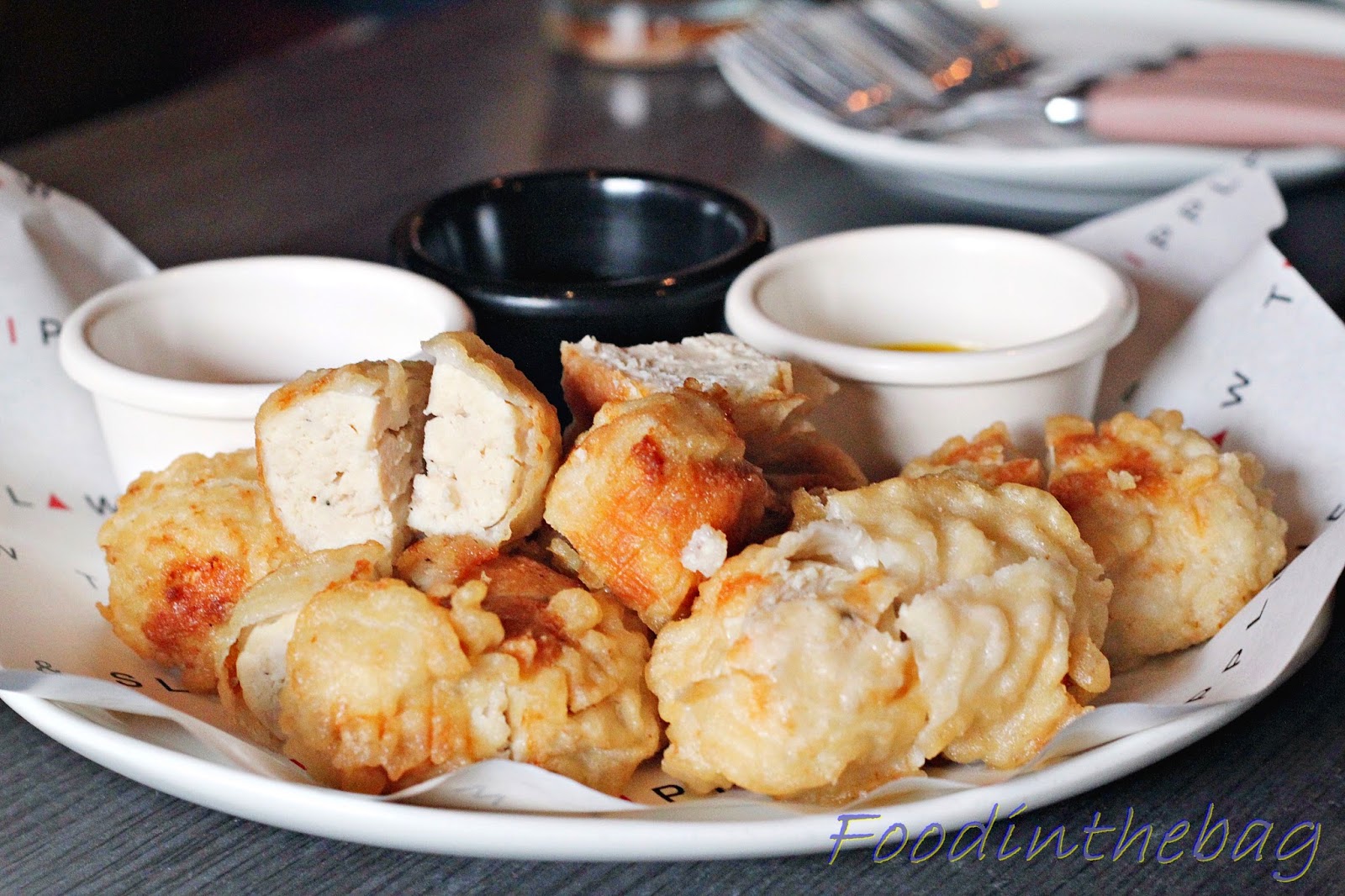 The chicken wasn't as juicy as I would like it to be. The coating would have also been better if it was crunchier.

Our last stop was MARMALADE KITCHEN. A hidden JEM in this part of BGC. Just a few steps away fomr T& S. It opens at 7:30am for its breakfast and brunch fair but definitely their desserts must not be missed. 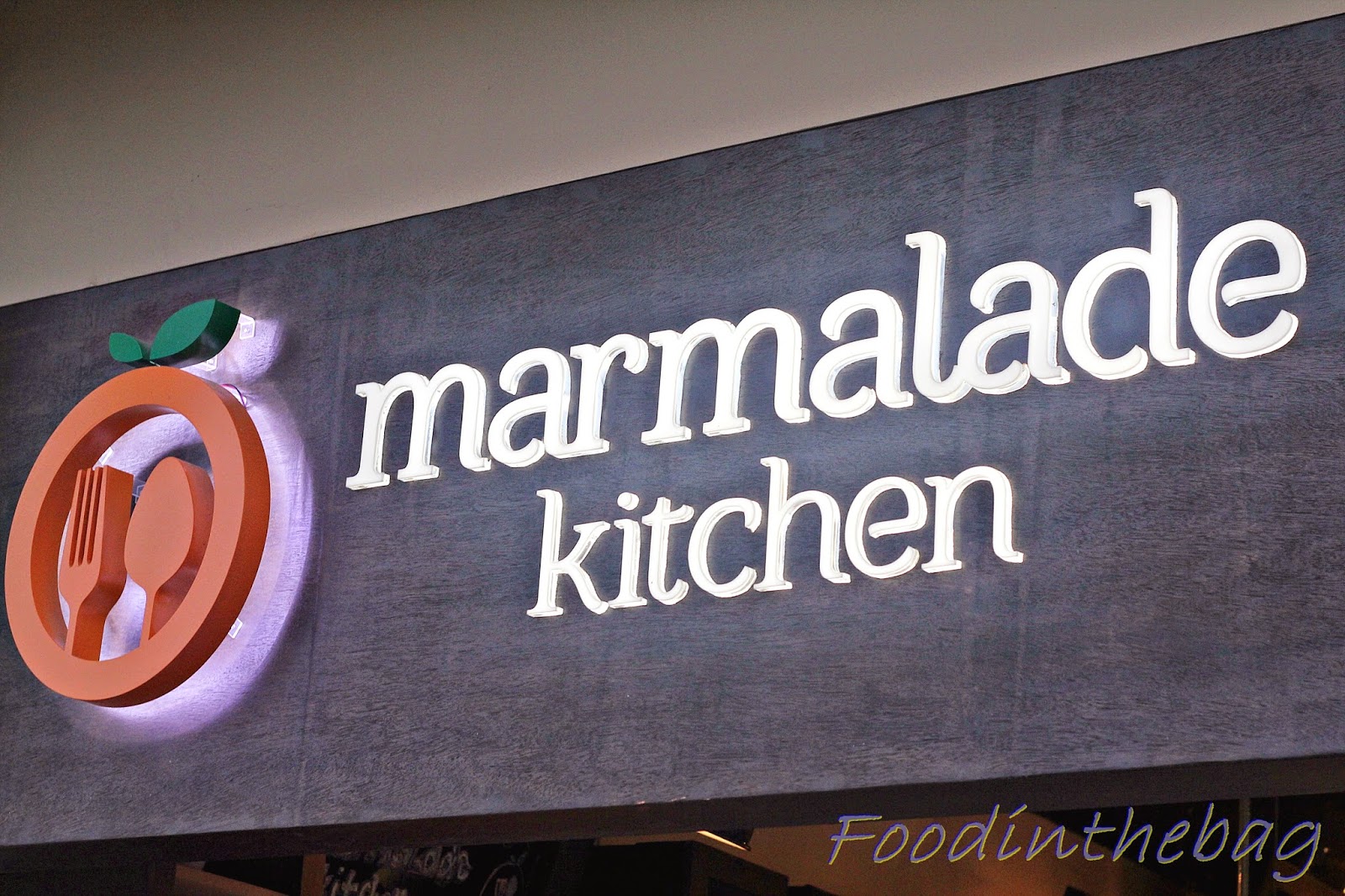 Here, MC gave her last tip, try out VSCO CAM. An app for those INSTAGRAM savy guys and gals out there. She showed how to use the different functions. 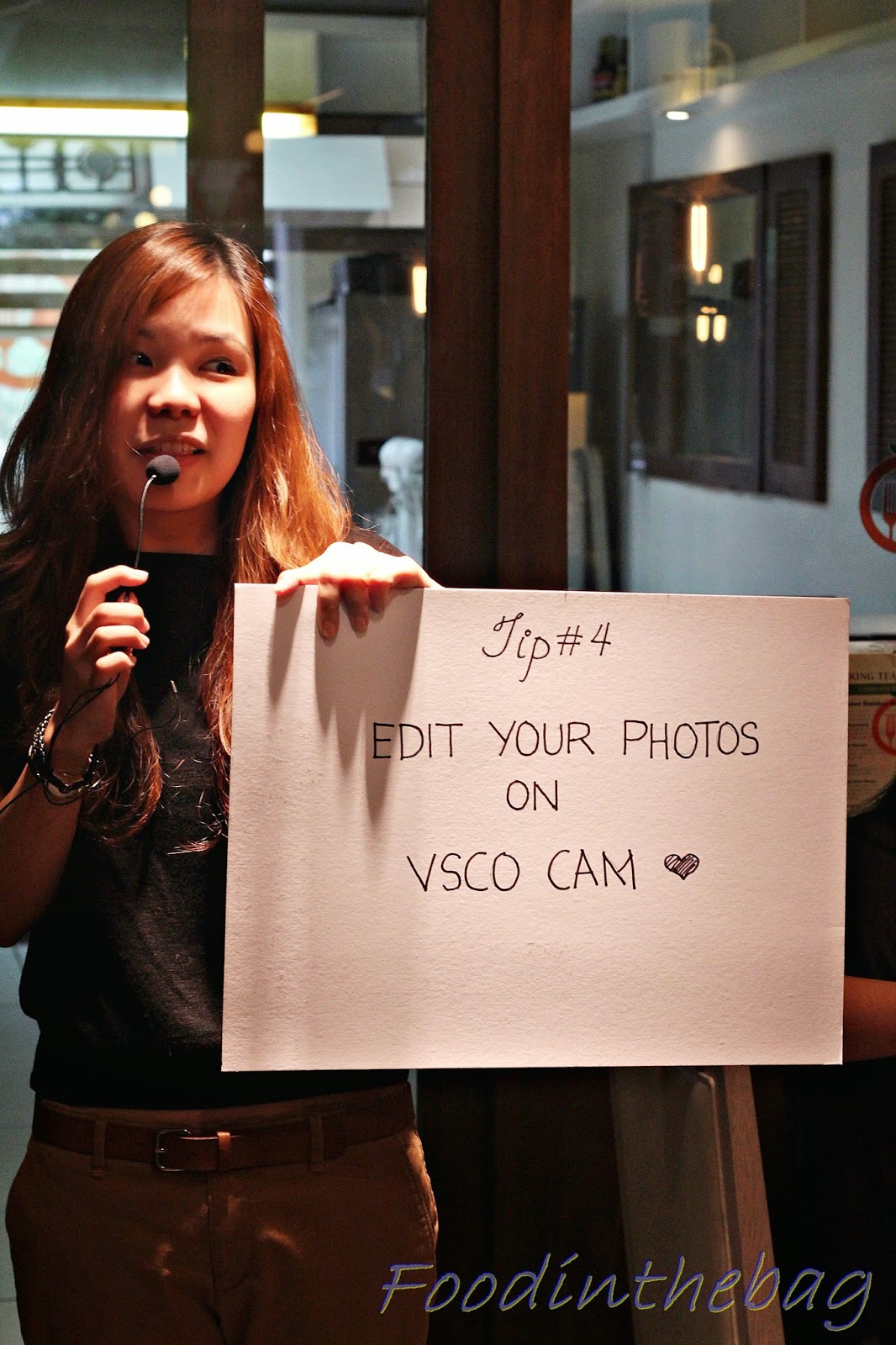 Although a little more work, it definitely would do wonders for your food pics.
We were served a lot of cookies and pastries and even some of their cakes. 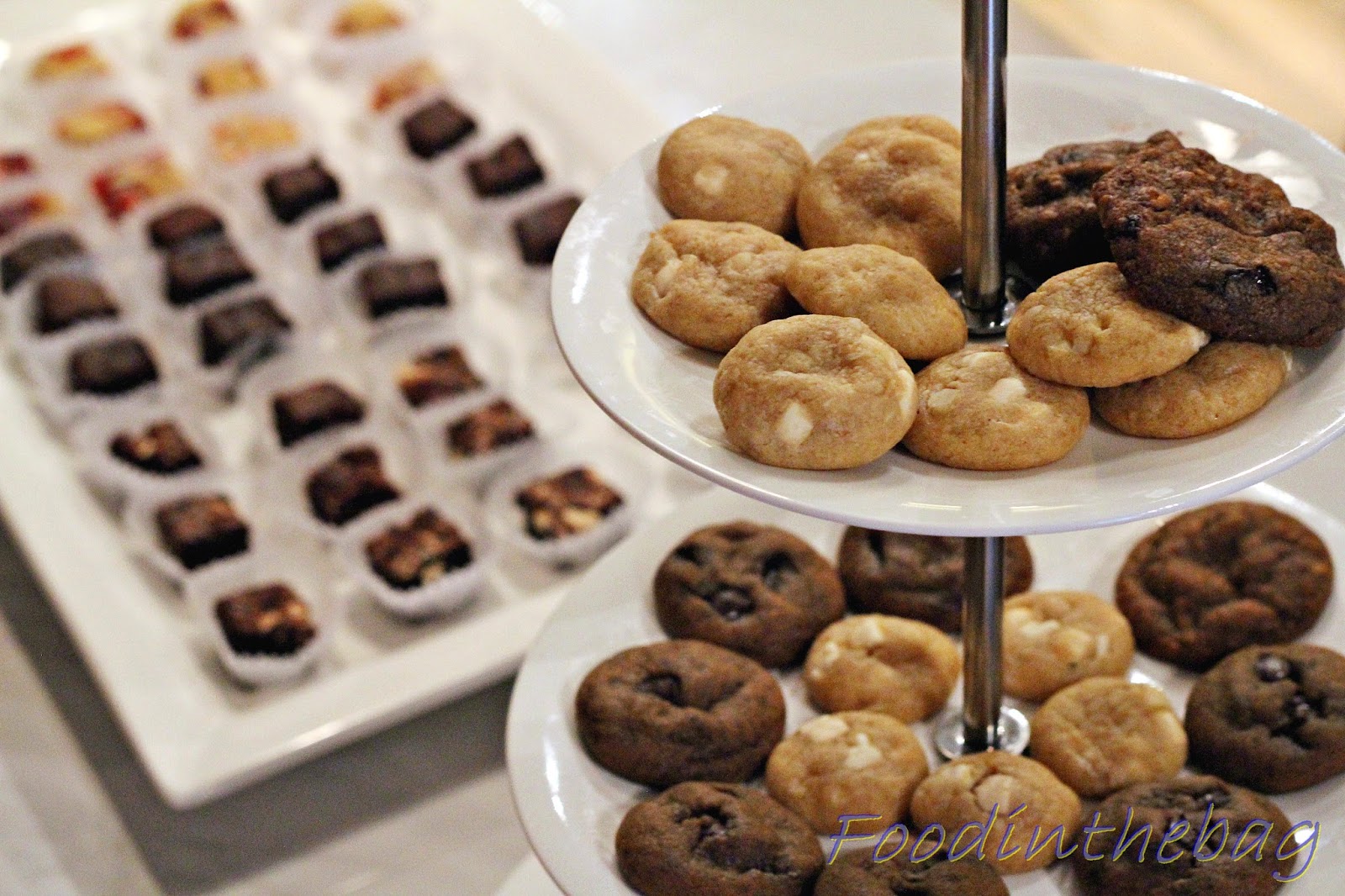 Just a sample of their other dessert dishes. 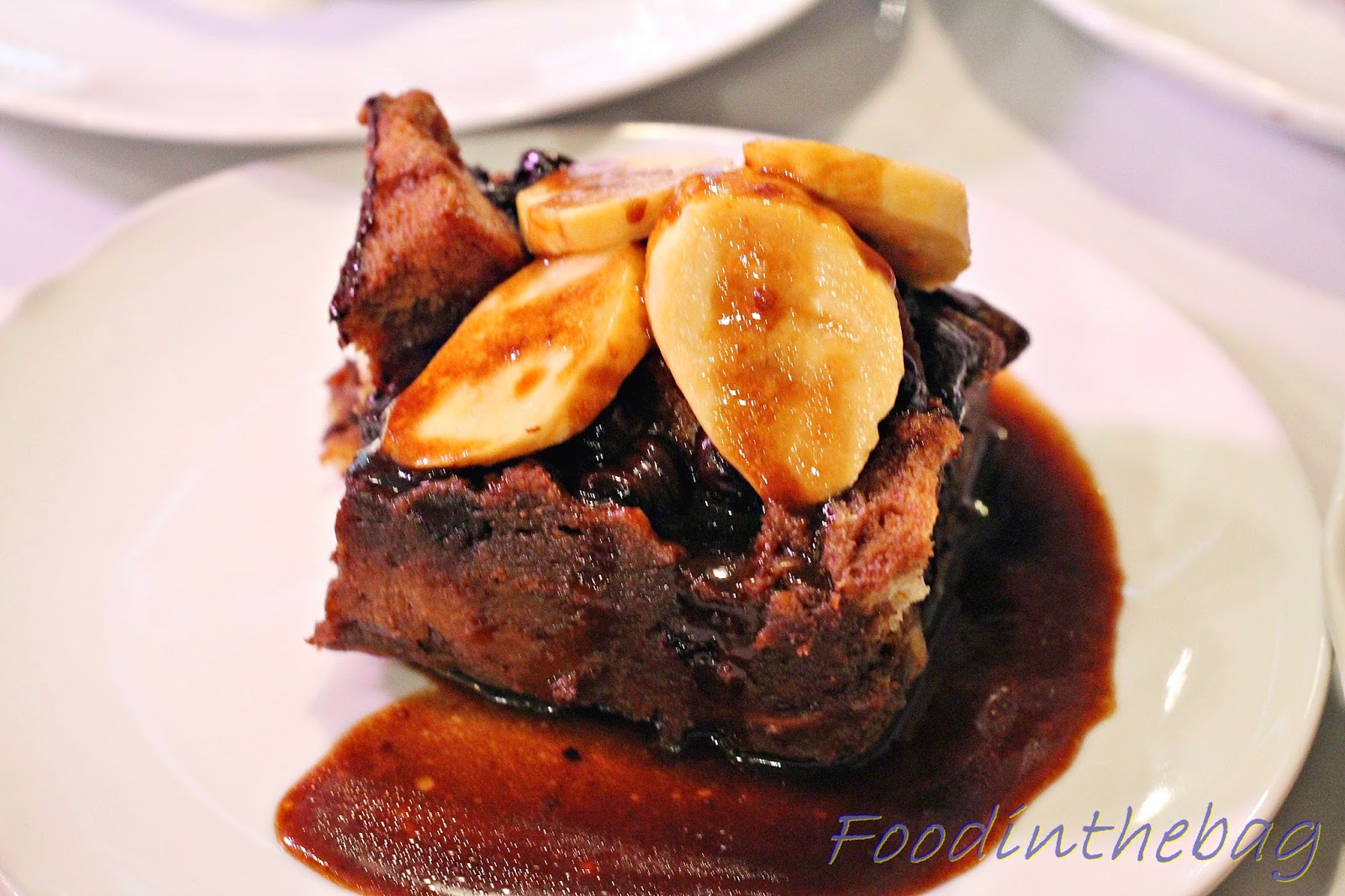 What's on my plate? A little bit of everything! LOL! 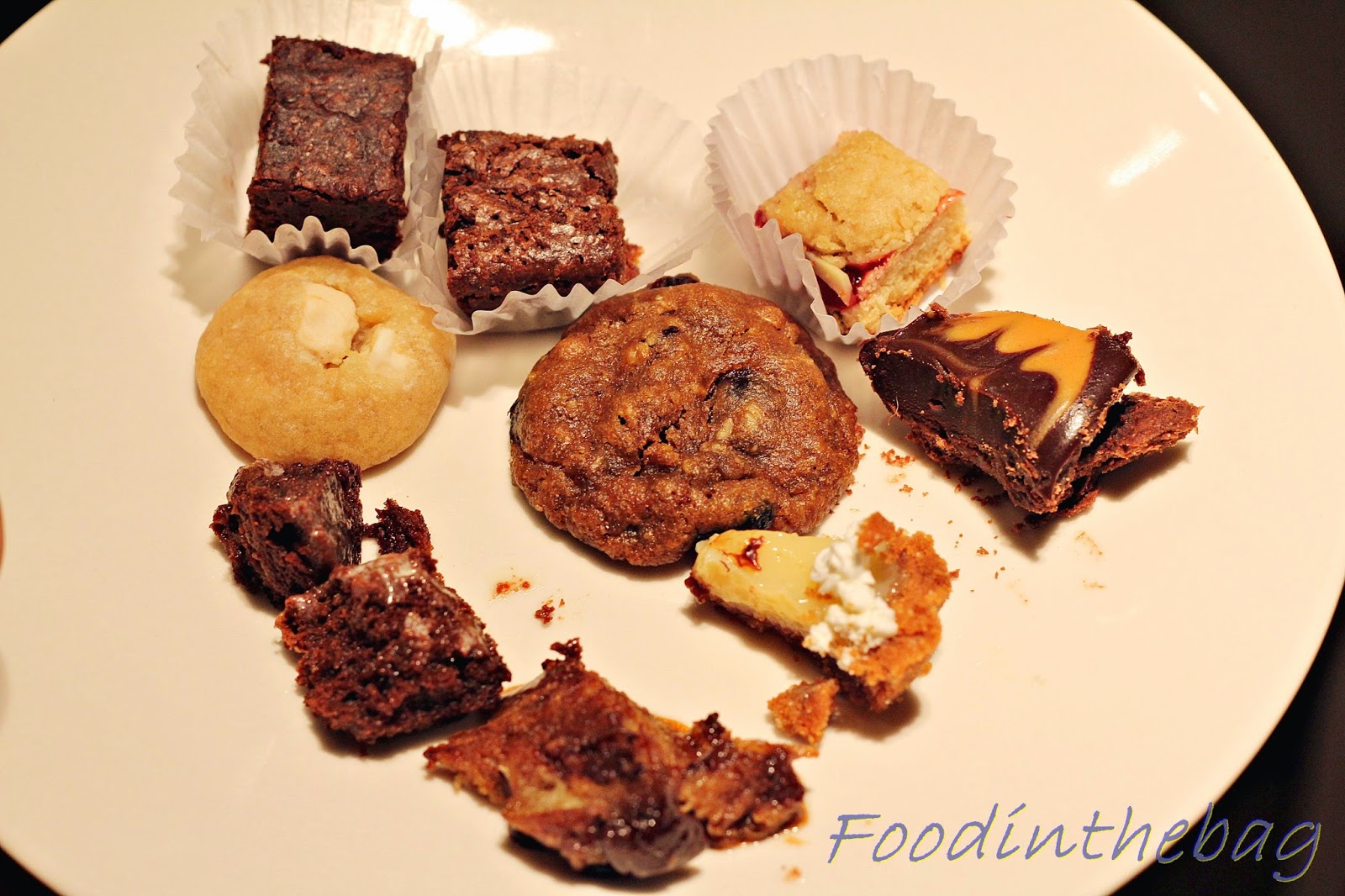 The place offers cooking classes and has an awesome breakfast fair. The ambiance is chic and relaxing.
Aside from breakfast, they also got some pasta and you could get some freshly made pasta which you could cook at home. They also serve coffee and tea so its a place where one could kill time.

Berylle and Darrel of Its Beryllicious, was a pleasant surprise. I got to give it to sir as his photography tips was spot on! LOL!  It was also an awesome surprise to finally meet
Stacy of Tsinoy Foodies , and Sumi of The Purple Doll. I totally love their blog and instagram posts! These kids are pretty awesome and cool. Wait.. Am I that old!!! Nooooo I am so like their age! Promise!!! 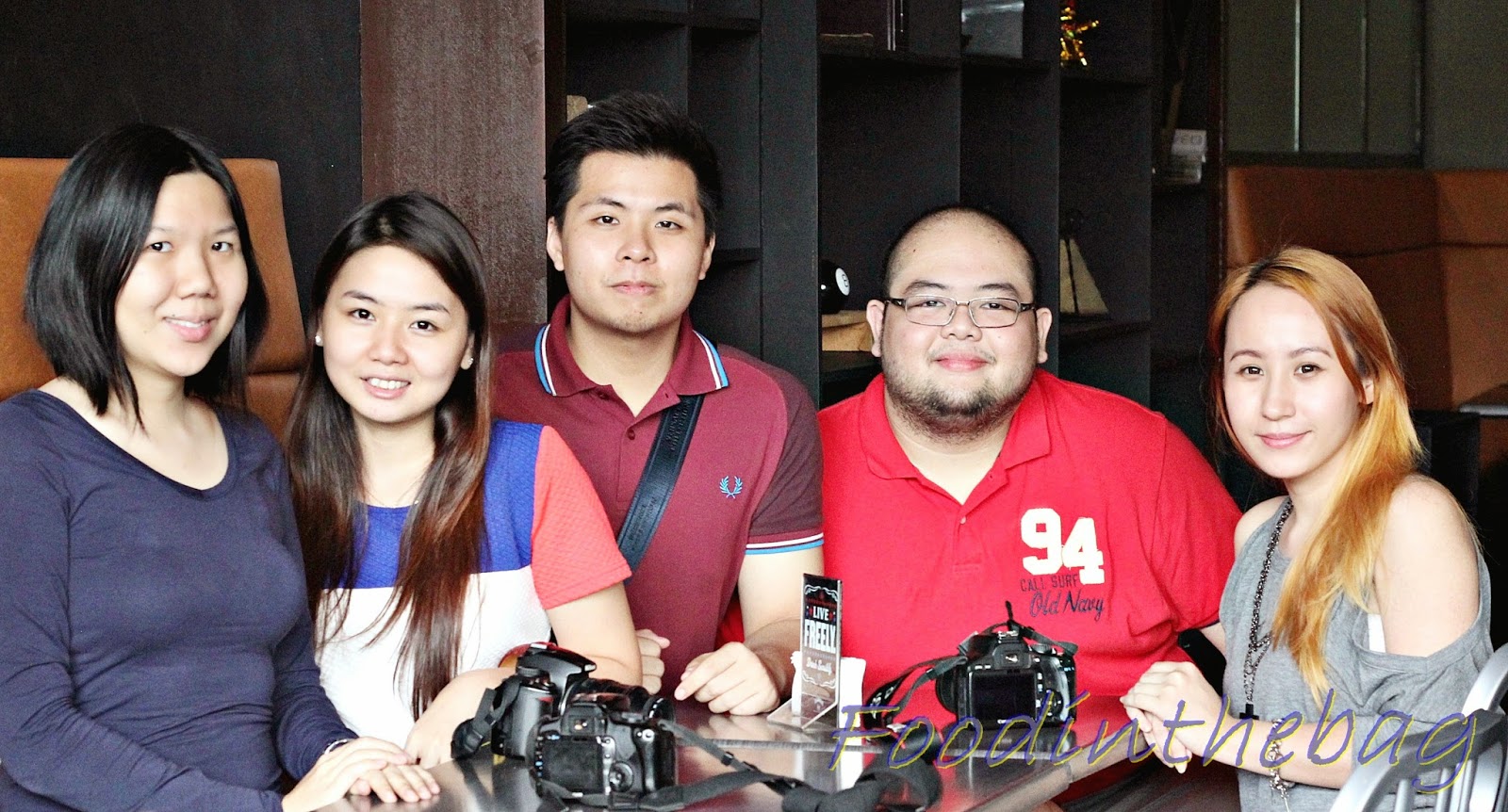 And with that, the food tour ended on a sweet note. Unfortunately, there are no longer tickets available as I mentioned and maybe you could get lucky next year...I gave away my stash so that others could also give it a go. So I guess, I won't be on the next ones. The tour lasts around 3 hours and you won't get full but you definitely get to try new and amazing stuff. Next Saturday, they will have drink pairing with food and the one after that would be healthy eating. Arghh! Something we must all aspire to do. LOL!

DISCLAIMER: wrote this based on my experience and I got hold of the tickets by redeeming them.
Tagged