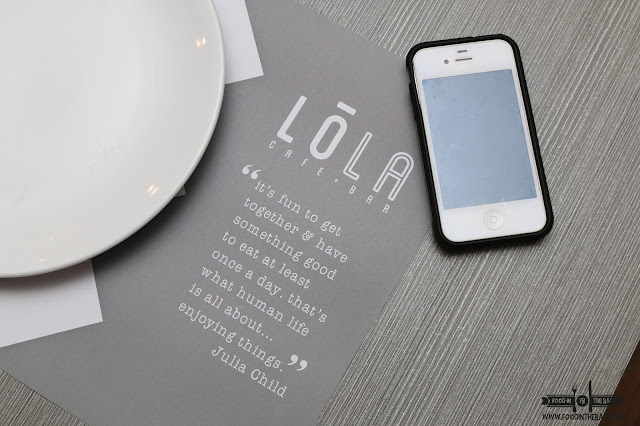 On a lovely Saturday afternoon, I was excited. I haven't had this feeling since I had my first kiss. It was because I was heading to one of my favorite places in the TOMAS MORATO area. LOLA CAFE and BAR. It was an old house turned restaurant. I remember the place pretty well. I would visit it with friends and had some pretty good dates in it. It was like going back in time. 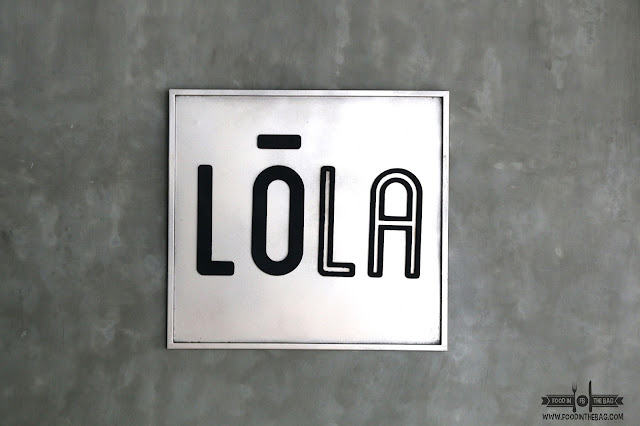 Julia Child has the best quotes concerning food. It seems she was foodie genius and rightly so. LOLA CAFE+BAR is a resto bar near TOMAS MORATO. It is in a hidden magical place. An ancestral home converted to a romatic hangout. LOLA CAFE has been the chic kid on the block for years. I've been there a handful of times. Even once during valentines (click here for my lonely experience). 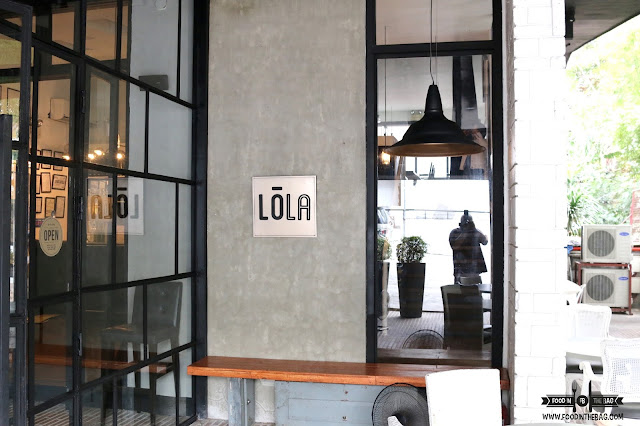 Once I entered the compound, it changed. The Al Fresco area was enclosed and is now cool. They still had a few tables outside for those wanting a smoke but with the weather, staying inside is better. 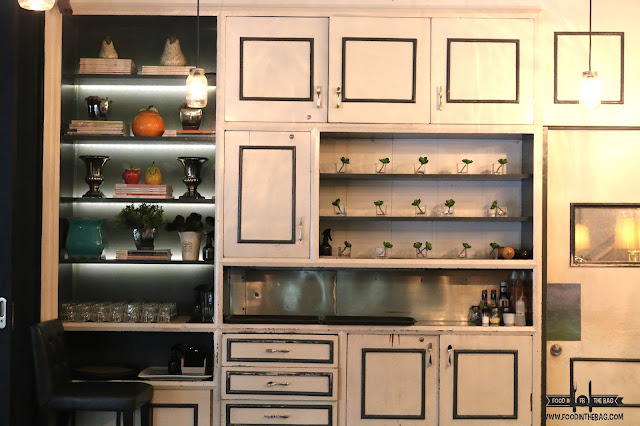 The Old cabinet and storage area is reminisce of a grandmother's home. The use of mason jars made the place somewhat romantic and perfect for a little gathering. 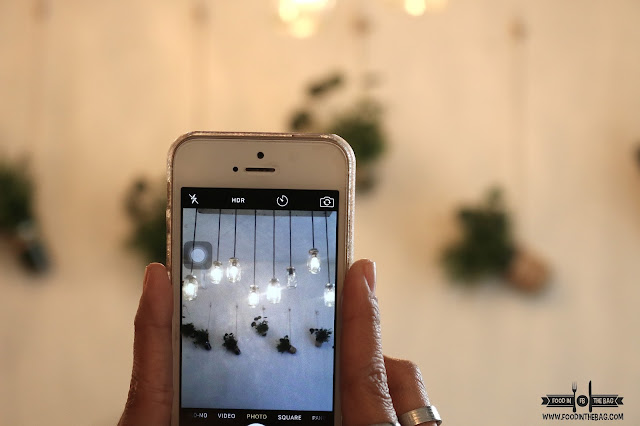 Food was prepared by their new chef consultant, CHEF JONVIC. The first time I met this guy was back at Gas3nomic event in Katipunan (Check out my superlative Gas3nomic experience here). He was making waves as he once was the sous chef of Chef Rob Pengson. Look where he got himself now. Incredible right? This time around, he tweaked the menu of LOLA CAFE and produced version 1.0.

Right from the get go, he introduced the starters. Different takes on old school Filipino Dishes. This is what he wanted LOLA CAFE and BAR to be. Something coherent. A menu that works together and definitely mingles with one another. 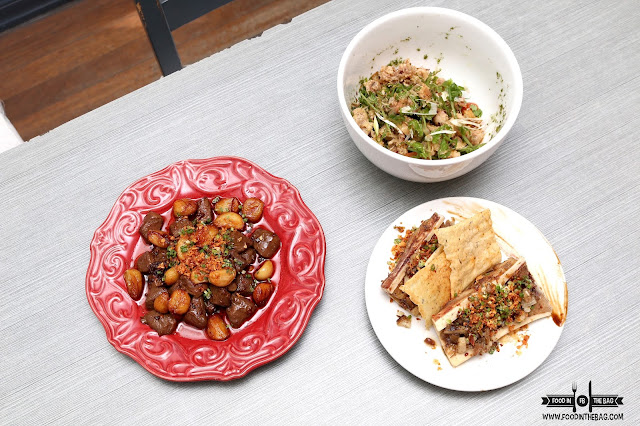 He started of with some CHIPIRONES (215Php). Fried baby squid, vegetable atchara, lola vinegar. One bite in and it wasn't your usual calamares. The baby squid made each bite different. It bought gave a crunch and the squid texture had a bite. It delicious. 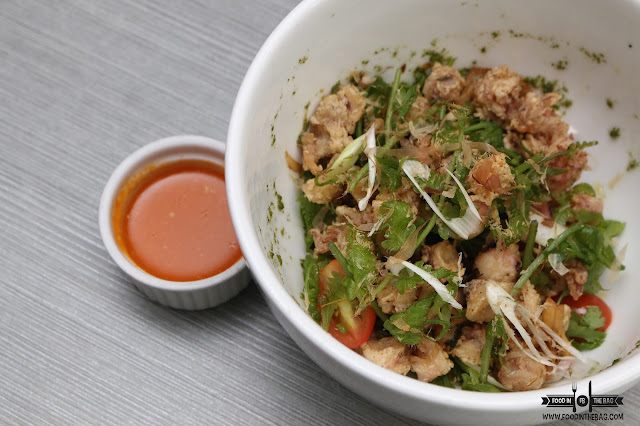 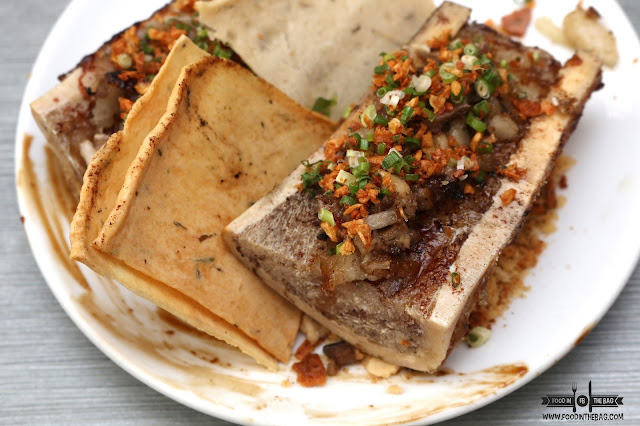 I know that one look and it might be too much for some. Believe me when I say that one bite and it is so worth it. The sisig on top is not too oily nor was it too fatty. The chef made sure that it was lean meat. The bone marrow though was deadly. It gave the fatty texture to the sisig. 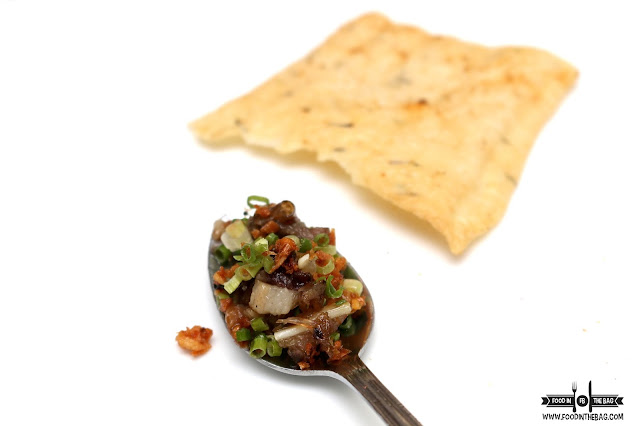 I'm not sure if it is an appetizer but the WAGYU SALPICAO (320Php) is something that could be partnered with rice. Kitayama wagyu beef, roasted garlic cloves, spanish pimenton, olive oil. The perfect salpicao. The Beef is perfectly cooked. It was sooo tender. Not over cooked. The garlic cloves, on the other hand, was borderline potatoish. It didn't taste like garlic to the point of having a dracula killer breath. Rather, it gave off that mushy texture potatoes would. Another cup of rice please. 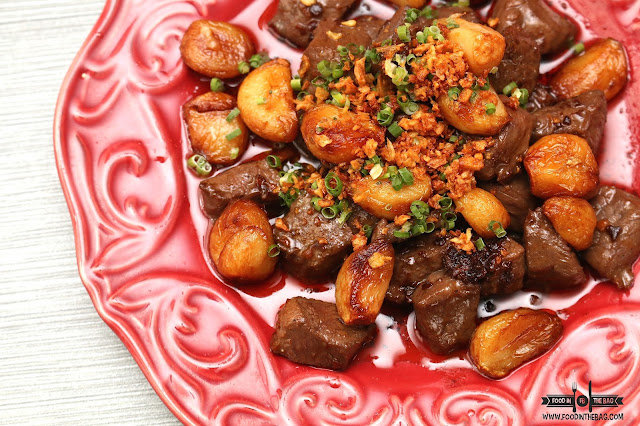 For healthy eaters, don't fret. They have the GRILLED CEASAR SALAD and the ALUGBATI SALAD. The grilled ceasar salad was made with perfection. The Alugbati was somewhat different. They used Kesong Puti or white cheese to give it a different texture. 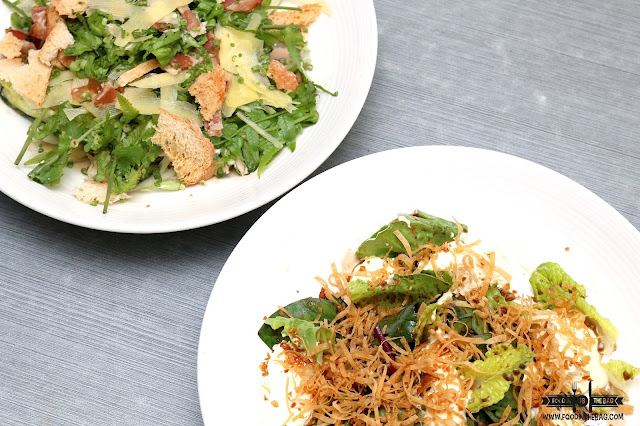 A different take on a familiar dish is the BACON BELLY BATCHOY (320Php). Braised Bacon Slab, Ox Tripe, Sweet Garlic Broth, Soft Boiled Egg. The incredible part here is the bacon belly. The crew at Lola makes them in house. The flavors coming from the bacon swirls into the broth of the batchoy making it rich but not to a point that it would suffocate you. The egg is perfectly cooked. Not overdone. Similar to the ones you get with ramen. 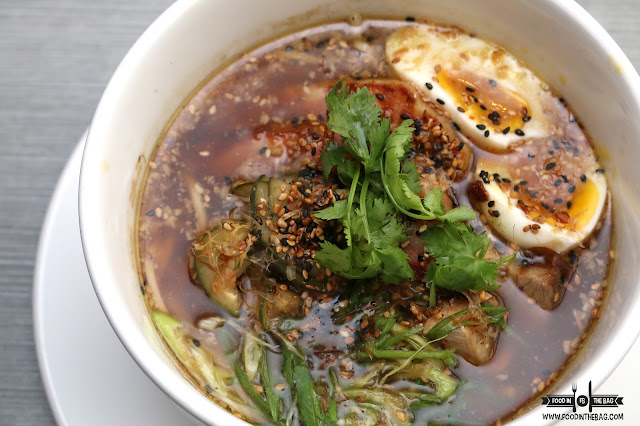 A dish that they carried over from their original menu, the SPICY TINAPA (215Php) had a remake. Basically Spaghetti, smoked fish flakes, fresh heirloom tomatoes, dried chili, and olive oil. It was a bit spicy but the taste of the tinapa was evident. 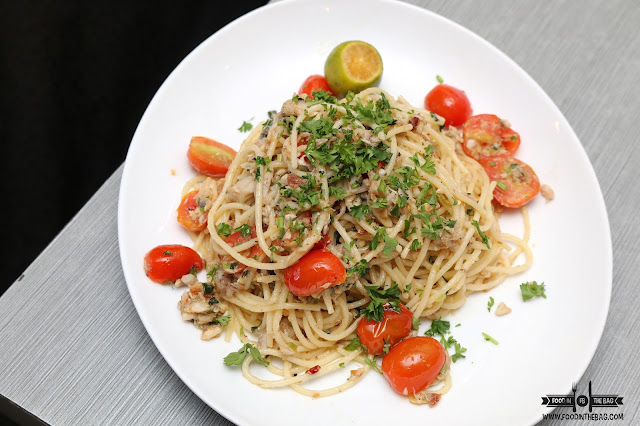 If you aren't into pastas and noodles, you could go for their SWEET PORK and BAGOONG RICE (295Php). ROasted Pork Belly, Salted Shrimp "HIBE" and BURONG MANGGA. Hibe is actually a kind of small shrimp that is dried. Burong Mangga, on the other hand, is fermented mangoes. All these mixed with rice. It's like having sweet and salty flavors playing in your mouth. 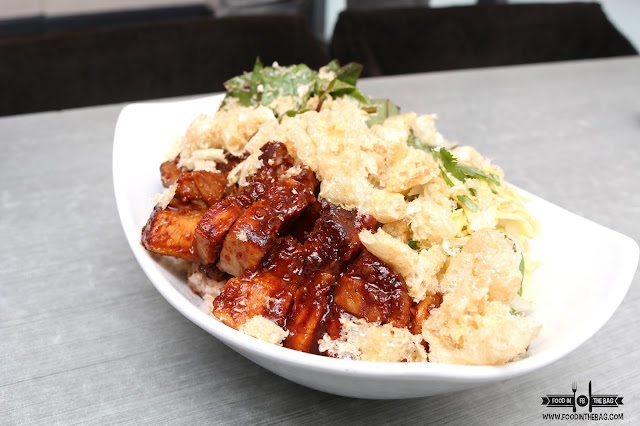 Another "meal in itself" is the 1/4 CHICKEN CONFIT and TINOLA RICE (280Php). Ginger Chicken, lemongrass rice pilaf, Green Papaya. This has got to be one of the best dishes. Everything was reminisce of TINOLA but it was something different. You could say that it was a deconstructed way of serving tinola. Without the soup, you might wonder where did the flavor go. Folks, it all went to the rice. The rice soaked up the tinolaness of the dish. This was done perfectly and everything was simple. Delicious and mouth watering. That is how I experienced this. 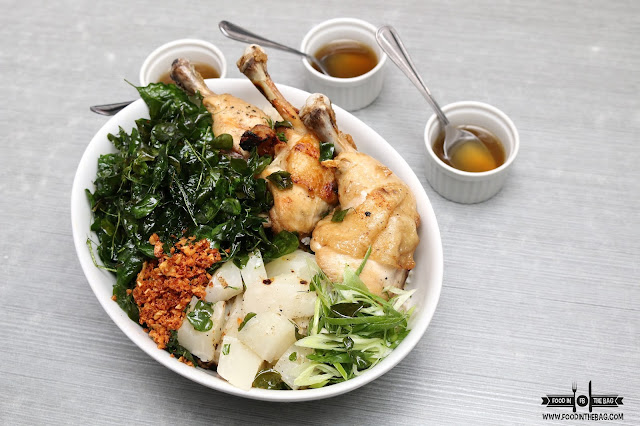 Adding to the healthy dishes is the GISING EXPRESS (140Php). Sigarilyas, french beans, finger chilies, homemade bagoong. Honestly, I didn't taste this. It was a bit spicy and it was veggies. So I stayed away from it. Not because I wasn't a believer of the food but because it was something I'm not inclined to eat. 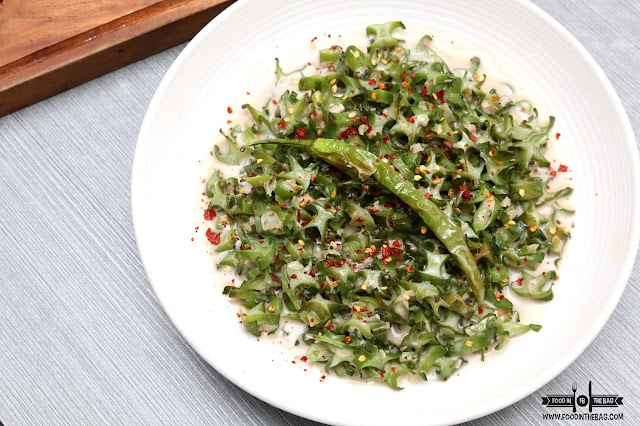 Moving on, the TRUFLLED LENGUA (495Php) was welcomed surprise. Slow braised ox tongue, wild mushrooms, porcini and truffle cream. You could smell the truffle a mile away. That and it has perfectly intertwined with the cream. It was a joy to eat. 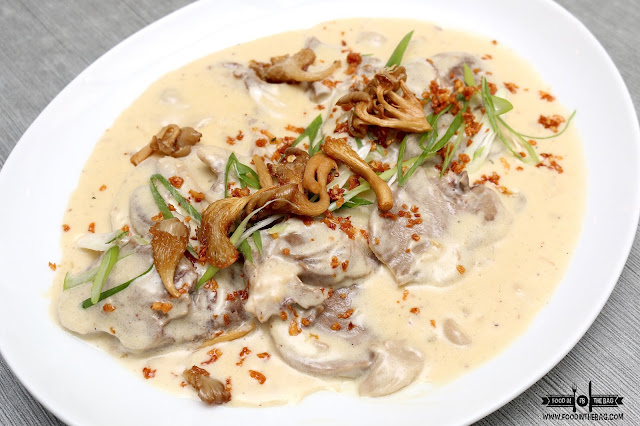 Because we live for meat, we had the ROASTED BELLY "TOCINO" (490Php) to cap the mains. 1/2 kilo slow cooked pork liempo, ssam-anise glaze, "burong" mangga. 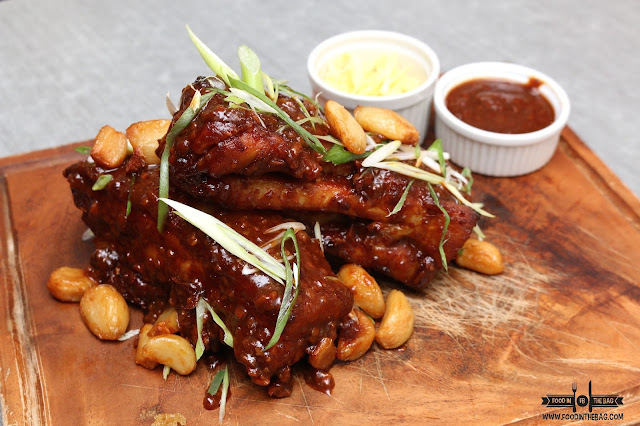 The name says it all. The meat was cured and seasoned in house. One fork in and it was moist and the meat easily fell off the body. 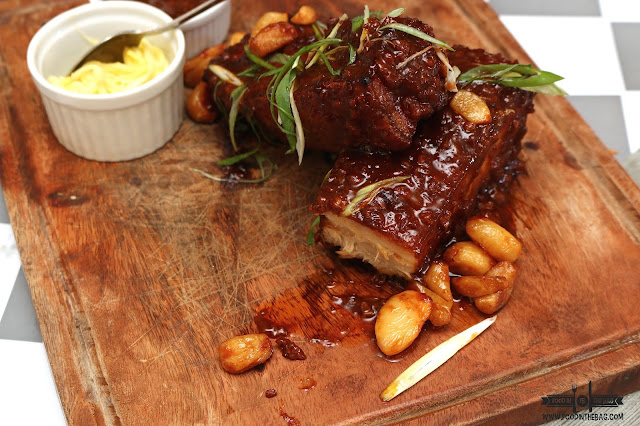 But the Chef didn't want the meal to end there, so we had the BUTTERMILK FRIED CHICKEN. (390Php). Calamansi buttermilk, ginger-scallion relish, chili garlic. The chicken meat was moist and perfectly cooked. The coating wasn't as calamansi as what I would have thought it to be. The citrusy flavor was but a hint. 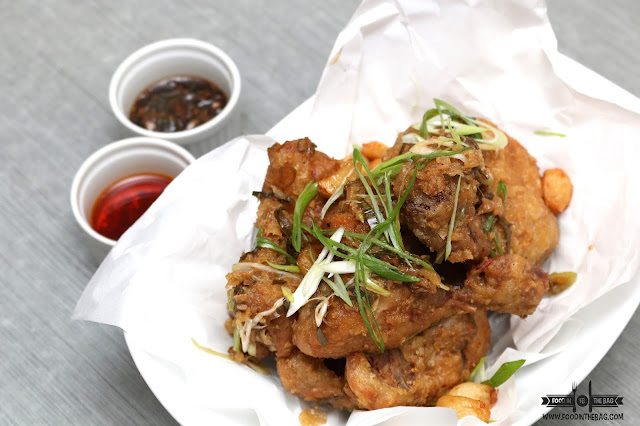 For dessert, we had the BAGUIO STRAWBERRIES and CREAM PAVLOVA. Sort of like meringue at the botton with cream and slices of strawberries. It wasn't as sweet as I would have imagine. It was a light way to end. 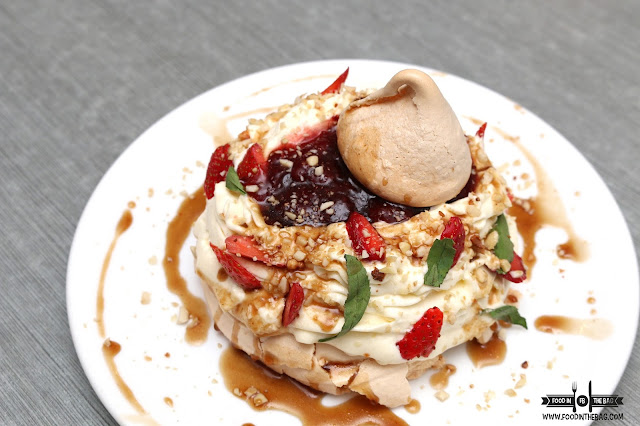 But I would go for the BANOFFEE PIE anytime.  Perfectly layered dessert. Graham at the bottom with reall slices of banana inside. The nuts were roasted and the chocolate used seems like old school. I definitely remember the flavor but it was so good that I can't seem to remember it. 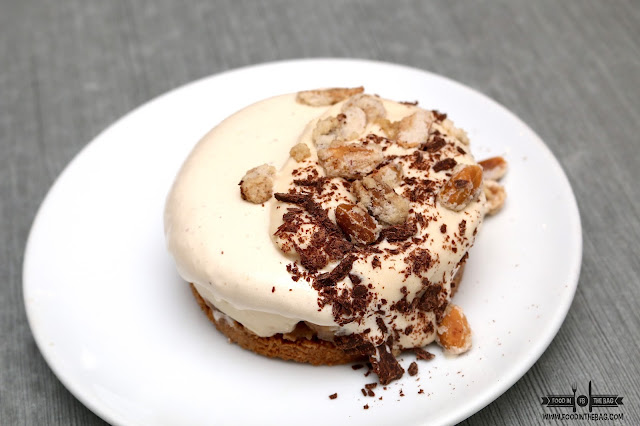 LOLA CAFE and BAR has been in the business for a few years. This new menu works perfectly with one another. It not only compliments the different dishes but it also gave a fresh look on how LOLA wants to be perceived. It is slowly going out of her comfort zone and making bold steps to up the ante. LOLA CAFE serves Filipino Dishes with a simple twist. The dishes are worth a try and they don't cost an arm and a leg. Kudos.


P.S. Don't worry they have parking. 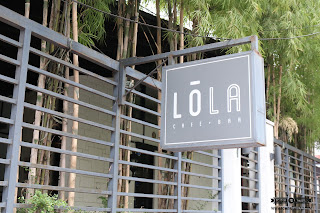 Disclaimer: was invited to try out the new menu of Lola, Wrote this based on my experience and opinions. Some of the dishes like the tinola rice was not a single order rather was grouped together with additional orders.
Tagged