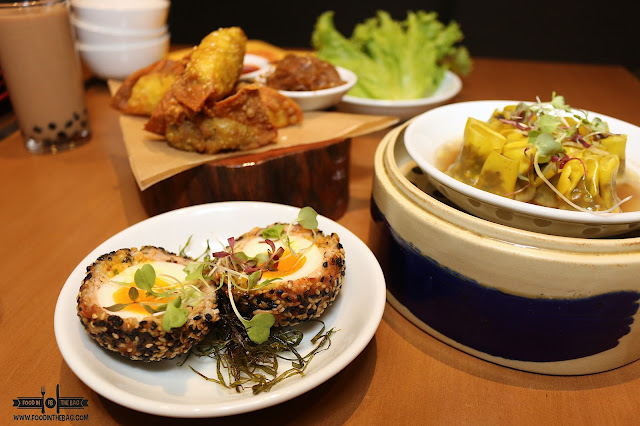 Something different and yet familiar. When going to a restaurant, flavors would either be subtle or overflowing. I believe there must be a balance in order to create a delicious dish. At PING PONG DIPLOMACY, they try produce classic Chinese dishes with twists that make them recognizable to anyone that tries them. 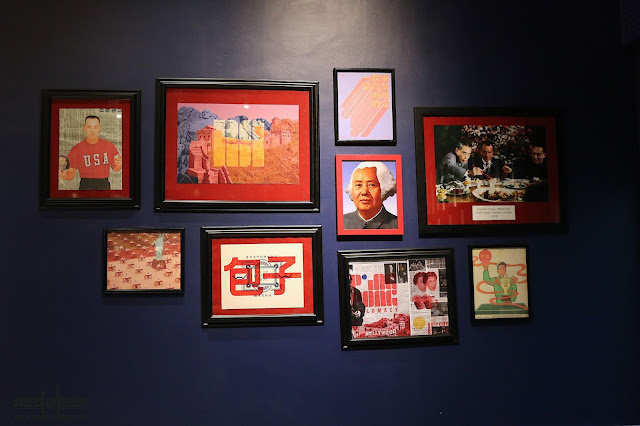 Located on the third floor of SM AURA in Bonifacio Global City, Taguig, PING PONG DIPLOMACY is just starting to put its cards on the table. Different dishes are in the stream line with more to come. For now, they have a lot of short plates that would make any foodie happy and proud. 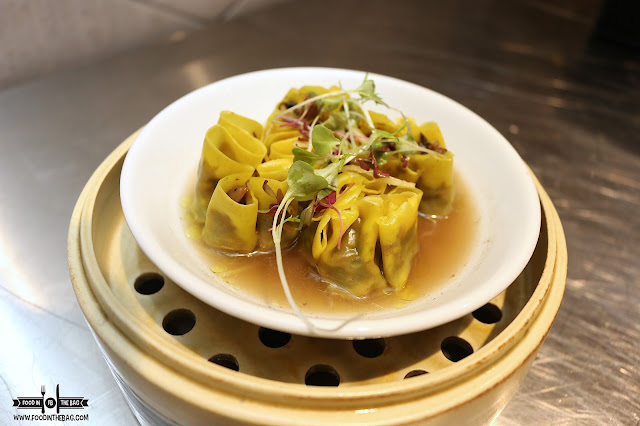 Starting off with some TRUFFLED MUSHROOM EDEMAME DUMPLINGS won't be too bad. The truffle scent was very distinct. Partnered with 3 kinds of mushrooms and some crunch from the edemame, you won't realize that this dish is vegetarian. Coined as WONTON CHEESEBURGER, wagyu beef with sharp cheddar is used as a filling to crispy wraps. To eat, one is suggested to use the lettuce as a vessel, alongside the caramelized onions and other sauces. 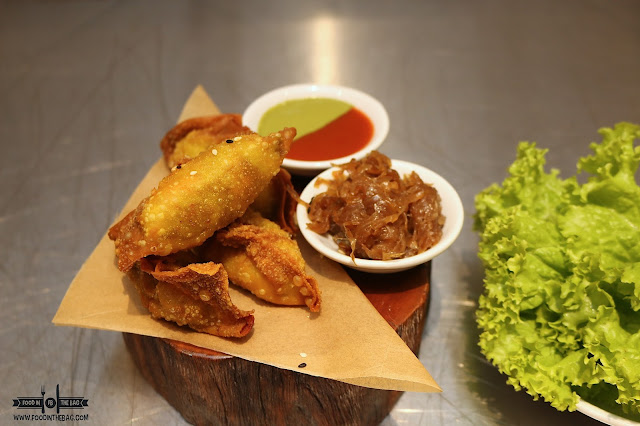 Aside from these two, there are other EGG options such as the PRAWN SCOTCH EGG and the SIMPLE FRIED EGGS. The 5 minute egg is covered with prawn and pork. Partnered with wasabi mayo it gives a light saltiness to the dish. 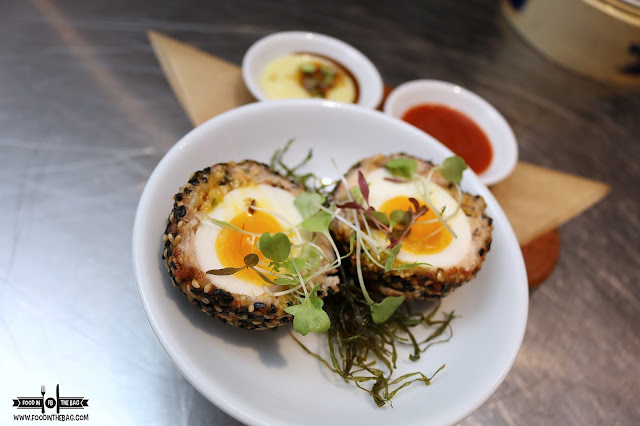 The SIMPLE FRIED EGGS is for egg lovers. Crunchy edges and a mix of scallions, pork floss and oriental sauce makes this a great company to all the dishes. Aside from giving a sweet and savory profile, this could be partnered to whatever you order. 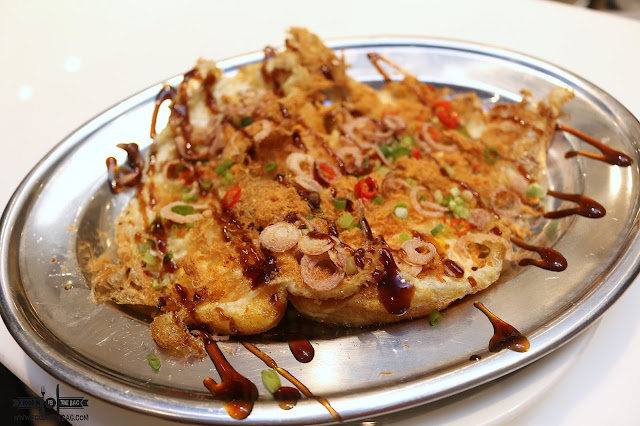 If there were a couple of small plates that anyone would go back for, it would be the CRANBERRIES and TOFU and the CRUNCHY EGGPLANT. 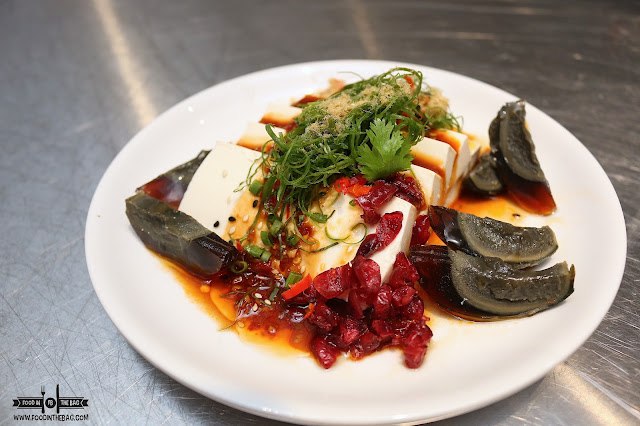 The TOFU had different components to make it into a multidimensional dish. From a simple base ingredient, the additives made it more mouth worthy. There is a hint of sweet, sour and umami flavor with each bite. Aside from this, the eggplant is cooked in a significant way.  There is a bit of crunchy as one get's a mouthful. The flavor is predominantly sweet but the pepper and different garnishes diffuses it. Both dishes are must order. 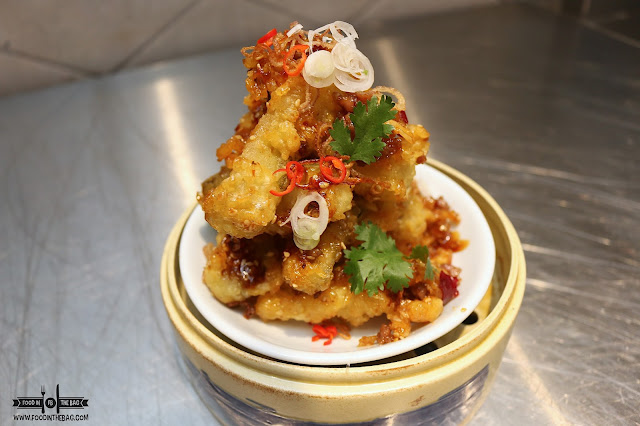 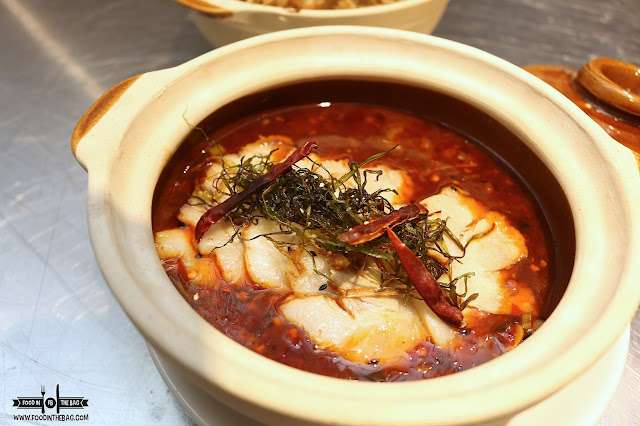 An ode to crabs, the TYPHOON SHELTER GRILLED PRAWNS was created. Usually this type of cooking would be used on crabs. This time around, grilled tiger prawns were bombarded with crispy garlic, and charred pickled vegetables. 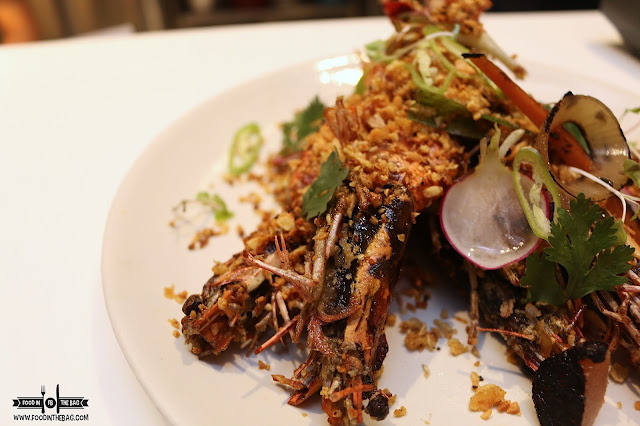 Something noticeable was the creativity and the use of distinct and bold flavors when it comes to the dishes. It seems they didn't want to be shy. It was fusion of sorts. Making use of different items to make dishes more alive. 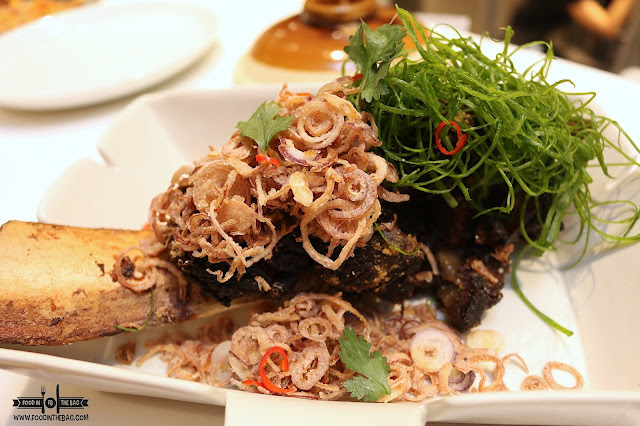 The CAVEMAN BEEF RIB was unique. One look and it might be dismissed as dry and tough to eat. Biting into it would result into the opposite. The crispy shallots and zhenjang vinaigrette gave the dish a striking surprise. The PING PONG WINGS are your classic fried chicken with the use of 12 spice blend. Having a hint of sweet and spicy, the pickled cucumbers diffuse it as well. 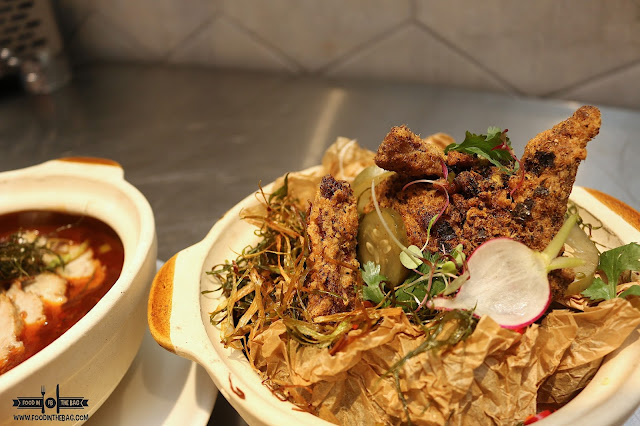 Noodles are an important part of any CHINESE RESTAURANT, at PING PONG DIPLOMACY, the SPICY CHICKPEA NOODLES is delicious and packs a punch. The chickpea are deep fried to give the Lo Mien texture. Thick cut bacon is around just for the fun of it. This is a bolder and spicier dish compared to the surf and turf noodle. The two might be similar but from what I hear, change would be coming. 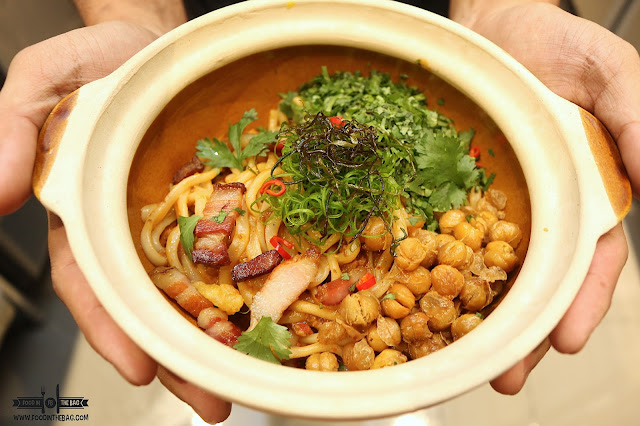 If there was one dish that would forever be in my must order list, it would be the DAN DAN CHICKEN SKIN RICE. Same as the one used to be served in HOLE IN THE WALL, this rice is deadly but worth it. The chicken skin gives each experience crunch and mouth feel. Definitely something you should try even just once. 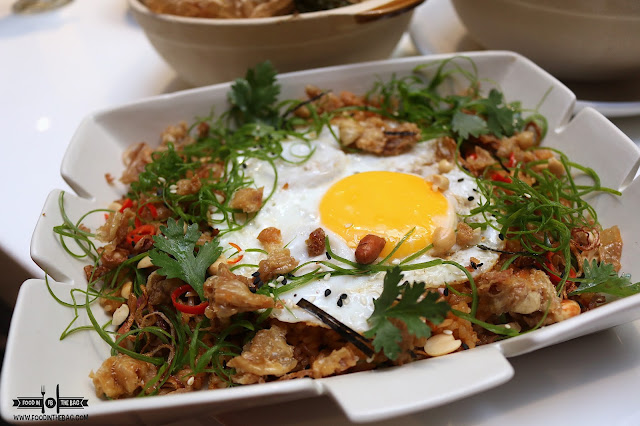 Desserts are still in the infancy stage I believe. The JICAMA PIE is like a deconstructed apple pie. The Five Spice Ice Cream was unique and the Jicama Compote was sweet. Unfortunately, the puff pastry was hard and dry. Maybe they could change the composition a bit. 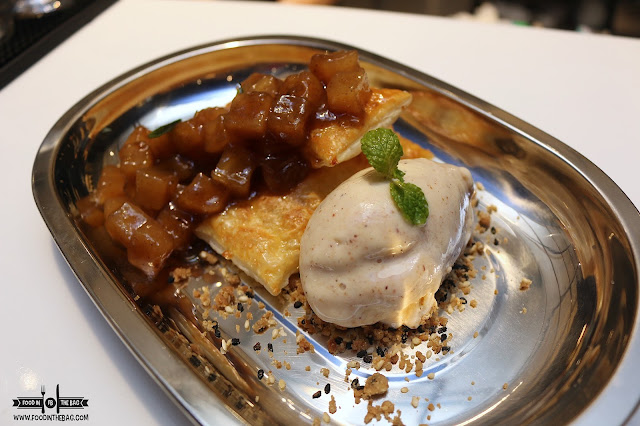 Another pulled apart dish is the MUNGO BUCHI. Every component of the classic dessert is outside. The red bean puree and the mungo hopia ice cream were separated from the main buchi itself. 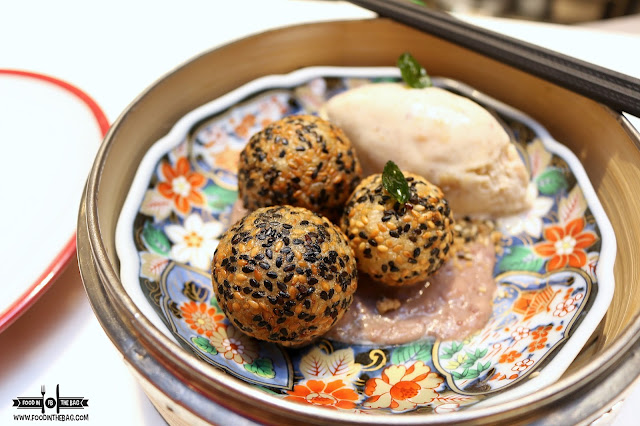 The dish that stood out though would be the FORTUNE BALLS. Different types of mochi surrounded with pistachio cream. The balls were smooth and have different flavors. 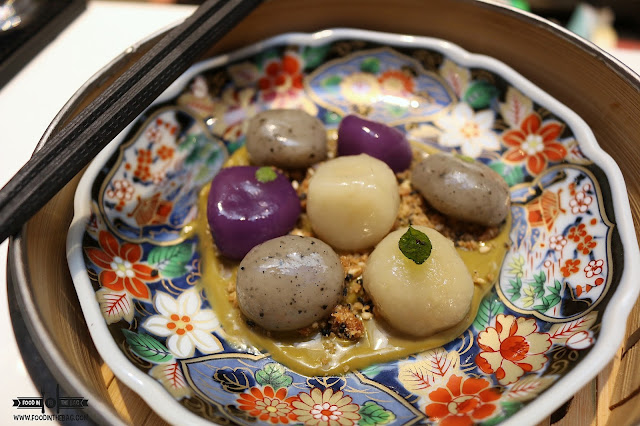 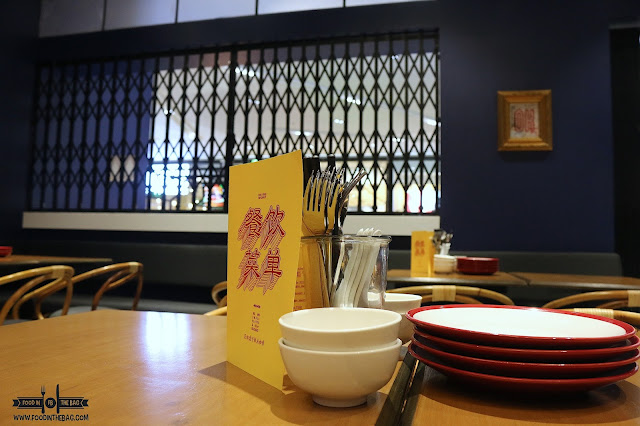 After a few weeks of operation, PING PONG DIPLOMACY plans to open up a take out counter that would be serving "Chinese Hamburgers" or baos that are simple but decadent. 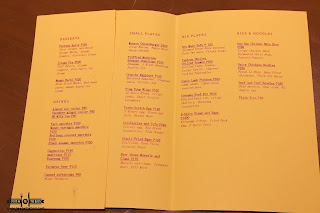 Disclaimer:wrote this based on my experience. was invited to try out PING PONG DIPLOMACY
Tagged