Gastronomical Adventure in the Goose Station

One afternoon, I was feeling all giddy and excited for what was in store for me that night. 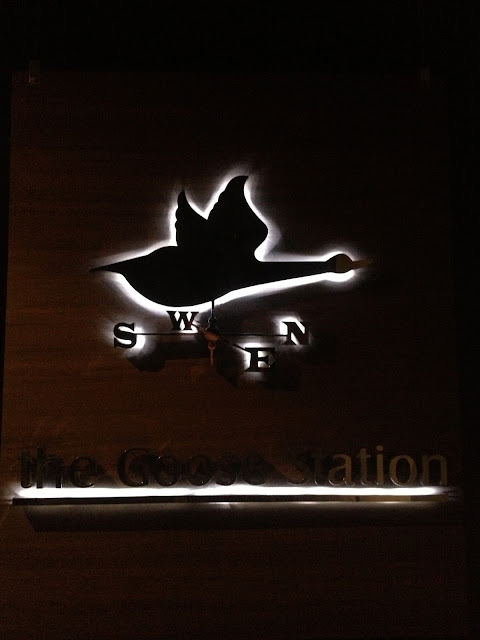 A dinner in The Goose Station.


I am sure that a lot of us saw Chef Rob Pengson show off his culinary expertise on television a few years back. We were all awed and moaning awwww and ahhhh's with his offerings. I believe this started the move of having cooking shows back on the air with Filipino Chefs at the helm. His popularity and his ingenuity led to the creation of one of the best restaurant in Manila. The Goose Station, tucked in an almost deserted part of the Fort, its ambiance and its service brings the romantic feel to foodies all over the metro. It lets one try out a lot of its offerings through its degustation menu.

I will be honest in saying that a meal here would cost an arm and a leg for us normal folks.  Thankfully 3 years plus into the future, I found myself at a cross roads.

It was a few weeks ago when I saw an incredible deal on a local coupon site. The deal was a bit expensive still but what the heck. Since this particular restaurant rarely gives off discounts or promos, I quickly took the chance and was able to purchase a few for my family. After a few hours on the block, the coupons went from a few hundred to zero fast.

So on a faithful Saturday night, I found myself entering a foodie heaven.
I was pretty much excited to try their degustation offering. 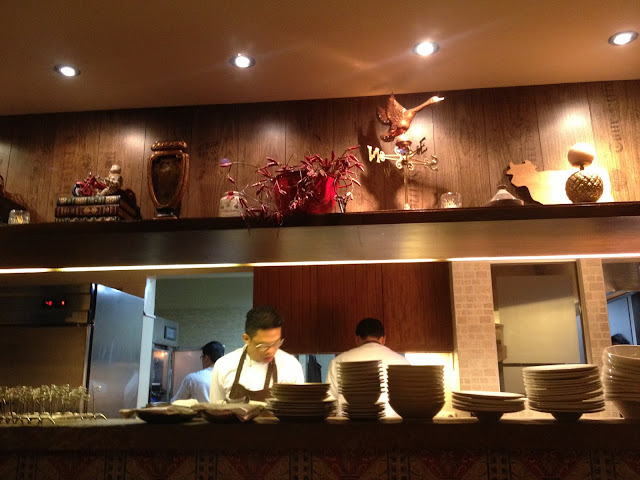 We were seated in front of the open kitchen. There we could see the chefs work on our food.

Of course we were offered bread. To start our meal officially, we had the foie gras cones. 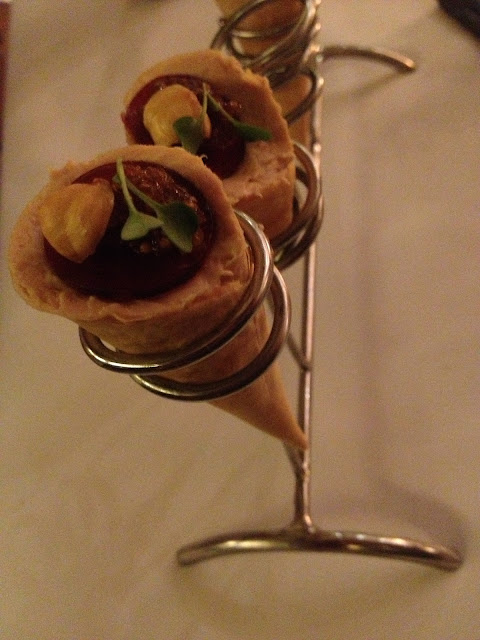 The cones were actually not crispy all through out but were soft. The fig jam and the foie gras were distinct with their flavors. This was the favorite of the night. No wonder ever since they started their operations, this was always on the menu.
The tuna was fresh. The flavors were popping in my mouth.

The chicken liver wasn't there in the mix. I tasted the bacon more. The chickpea had an eggplant flavor in it. It had a hummus like feel. The salmon was perfectly done. It reminded me of salmon salad on crunchy bread.
The egg was cooked for over an hour. It seemed that it was like poached but the waiter informed us that it was cooked for a long time. The sweet potato tasted like chippy. Yeah.. childhood snack time. The carrots were pickled. The bacon and the cheese gave their distinct flavor.
This sorbet actually tasted excellent. The lychee and the strawberry went well together. It wasn't too sweet and it helped cleanse our tongue from all of the flavors. The three drops of balsamic glaze added a zing factor to this dish. Amazing.
The scallops were freshly cooked and were soft. The carrots were pureed and had a hint of curry like. I just couldn't get what that distinct flavor was.
A fresh twist into a breakfast delight. This taho deliberately fooled me. I was thinking that it would be sweet, just like any taho. I was wrong... DEAD WRONG. It was savory to say the least. The tapioca was the only thing that was familiar. It was small and soft. The liquid has predominant balsamic flavor. Not to the extent that it was overwhelming the flavor. The taho or the tofu was made and mixed with Foie Gras. It was heavy, savory and flavorfull. It was buttery and everything foie gras was in it.
Let's start with the fries. It has crunchy skin and soft insides. It would easily be cut into half and potato would mush out of it. The burger patty was made with angus. It was perfectly cooked and was melting in my mouth. It was exquisite and incredible soft and tender. YUMMY! The Brioche bun is a great compliment to the burger. 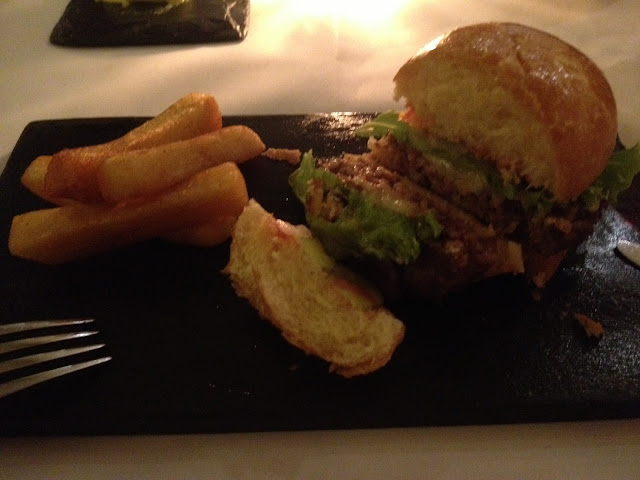 Nearly ending the dinner, we were given halo halo. It looked different but it was seriously halo halo. The different parts of the dessert were present. Another delight! 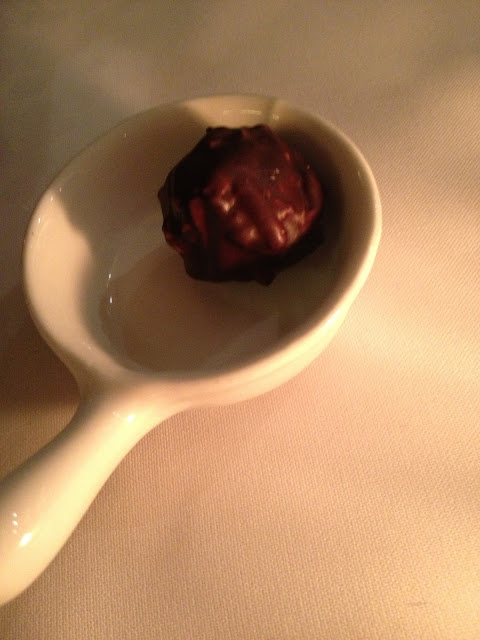 A little chocolate surprise. It reminded me of ferrero but it was still different. It didn't have the wafer coating inside. It was a perfect ending to the meal. It was just right not too sweet and not to heavy. 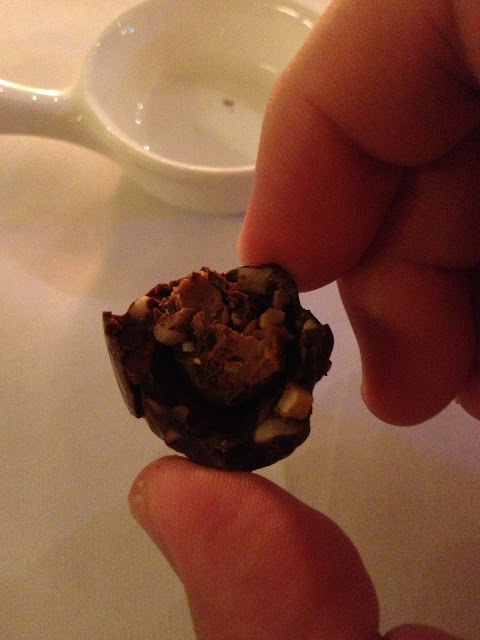 I can not for the life of me, give proper descriptions to the food we ate.
Everything was of incredible quality and was way past the standard. Although each of the servings were only miniscule, I could honestly say that I was full after the meal. This is a classic example of small + small + small + small = busog moment. The meal started at around past 6pm and ended a few minutes past 8pm. So for almost 2 hours, our taste buds were tantalized and we were in heaven.  I could honestly say that I would remember this meal for a long time. 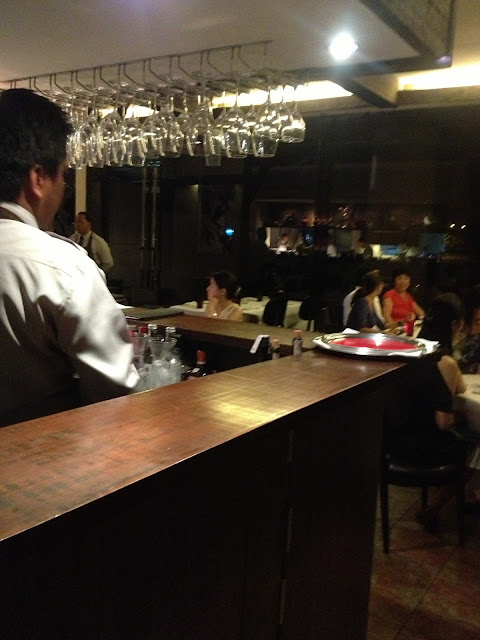 On our way to The Goose Station, we passed by the area were there was an explosion. The street was still closed and a lot of forensic and Soco members were still there examining the place. 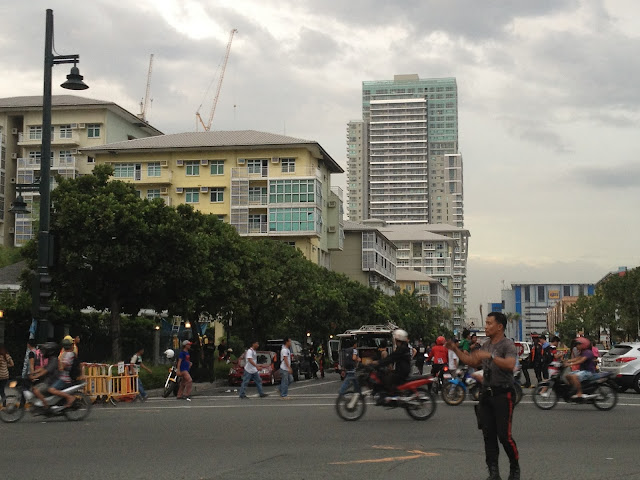 We also passed by the newly opened SM Aura, I wasn't really impressed with it aesthetically on the outside since it was still under construction. Maybe I will visit it when it is already in full operation. 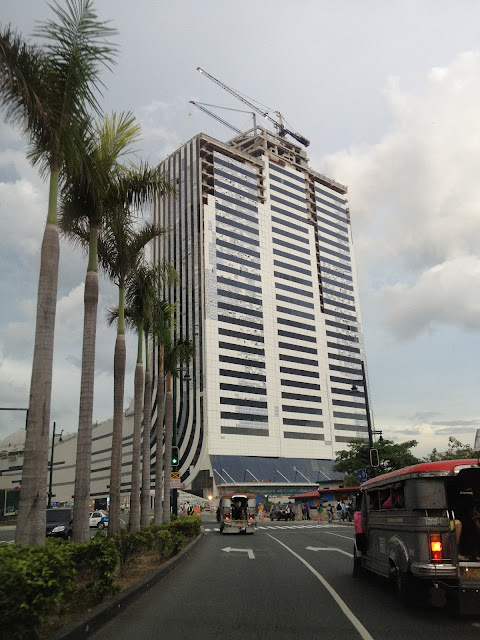