After settling down in my hostel, I got a call from my friend C and S. They were both lost. OMG! I had to instruct them on how to go about and where to find me. I actually told them that if they want I will be the one to pick them up! LOL! IKR! (Taga SG ako?Diba ako ung bisita!!). Good thing, they were able to follow my instructions to the letter and was surprised to see that they were at the hostel's door steps.
Of course after the mandatory hugs, opening of the pasalubongs and making small chit chat in the hostel's lobby, the main question was where to eat. Since I did a little research about the different places I had wanted to go, I already knew where our first stop would be at.

Hello Maxwell Food Centre!
Maxwell is one of those hawker places where you would go to for one thing. To be specific that would be Tian Tian's Hianese Chicken. 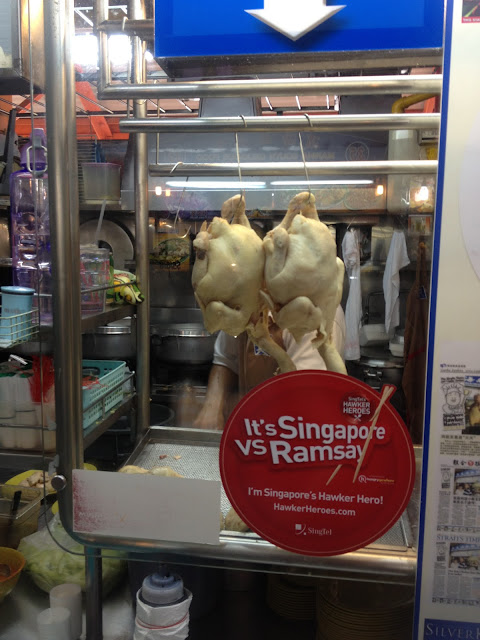 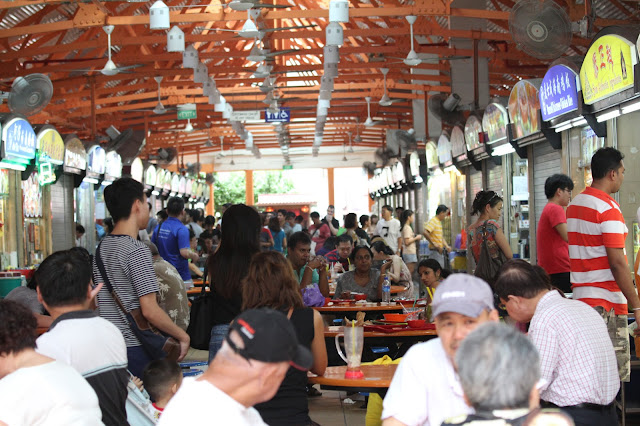 It was actually around 3:30 in the afternoon when we got there.  This was the scene. 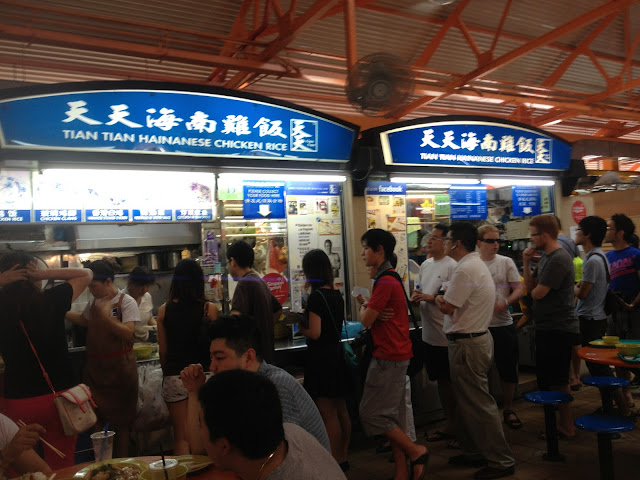 LONG LINES!!! ARGHHH!
I do not usually line up for food. As I said before, only rare occasions would lead me to wait for it. Since this is SG, I gave way. Why? I guess it was because of their culture that if they want something that badly, they are willing to wait it out. So do what locals do. If in SG and you see a long line, chances are that place serves awesome stuff! 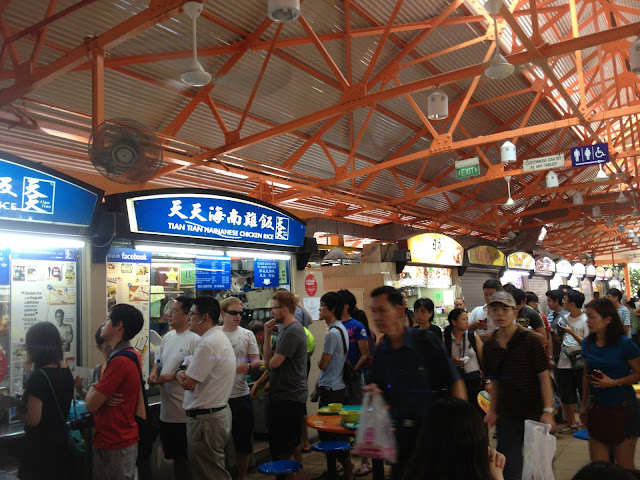 There were actually 2 long lines at Tian Tian. One is for claiming while another for paying and ordering. 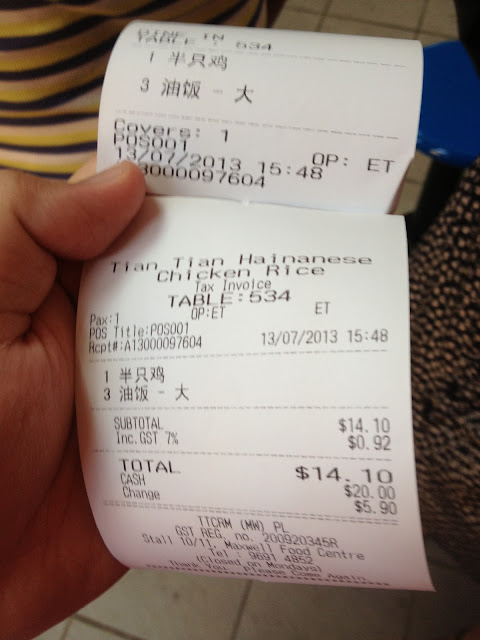 After paying and ordering at the counter, one would line up again to claim.. ARGH!
It was great that there were some Filipinos on the line that told us that  we needed to pay first. Whew. We could have had wasted a lot of time with that. Unfortunately, this happened to a lot of tourist there. Auntie pulled them out of the line and made them line up at the counter to order and pay first. She kept on checking the "claiming line" for those who hasn't ordered yet. 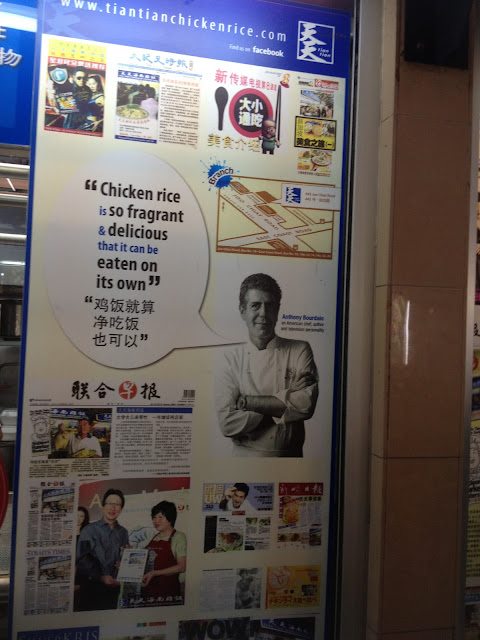 Actually, I heard of this place from this guy. During one of No Reservation's Episode, Bourdain clearly gave a few compliments to this store. Although that was a few years back, the long lines here say how great this place still is. 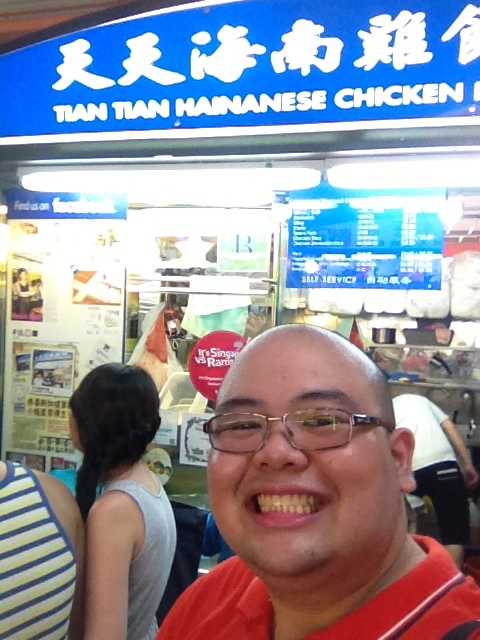 After waiting for almost an hour, we were able to secure the food we ordered! 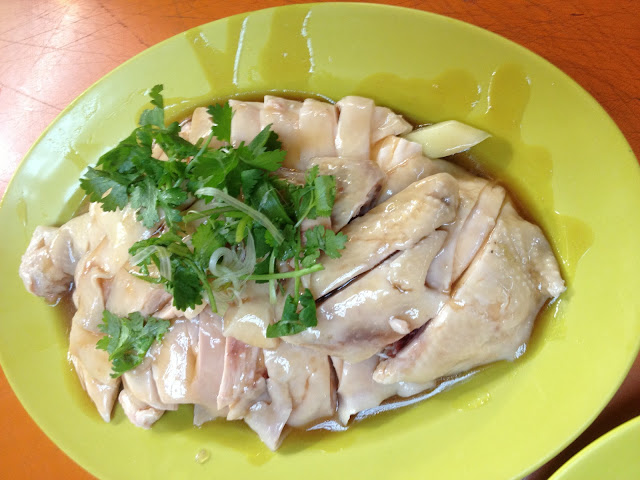 The half order of the Chicken (SGD$12) is clearly good for 3-4 persons. It was succulent and juicy. I think it was perfectly cooked and yummy! The chicken was plump and isn't like the ones we have here in Manila. It was actually huge. The flavor was there. This was better than chatterbox! 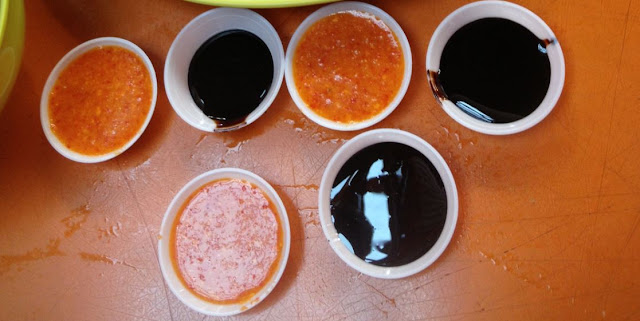 What would chicken rice be without its sauces. We were given the sweet sauce and also some red hot chilis. OMG! The sauce gave a depth to the flavor. Actually to eat the chicken without them is all right but to better appreciate and enjoy it one must be able to fully utilize these awesome sauces! The chili sauce made the chicken more appealing to taste. It helped the appetite to go full board and attack it with gusto. The sweet sauce made the chili's hotness a little more tolerable. It works hand in hand. 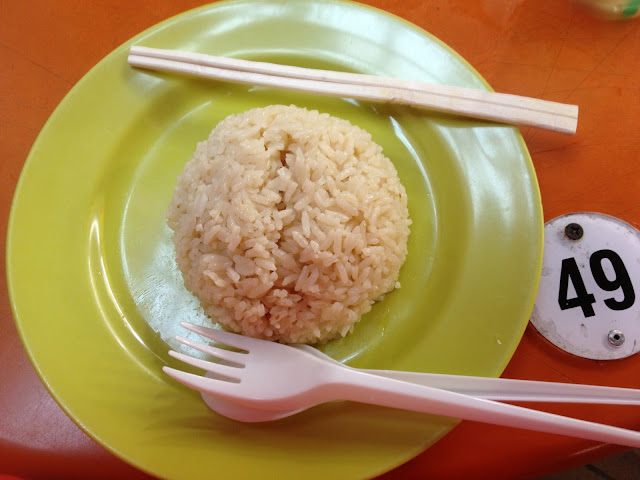 According to Bourdain, the rice in itself can be eaten on its own. I have to agree with his statement. Its aroma and flavor clearly gave it the right to be called one of the best chicken rice in SG. Amazing!

Of course, foodie can not live with chicken alone. So we of course ordered something else. 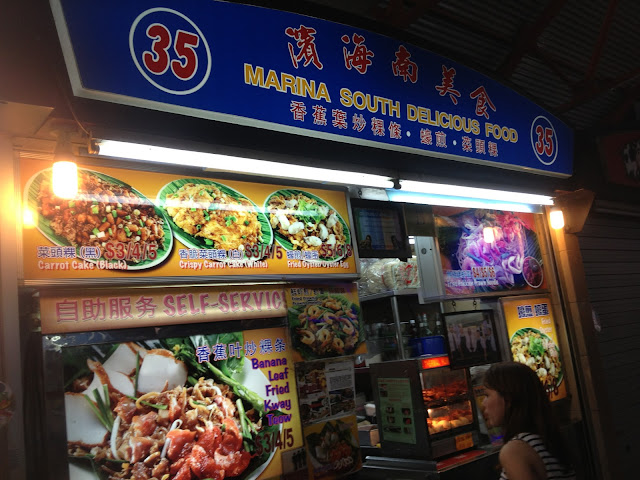 This stall is almost directly infront of Tian Tian. What I like about hawker stalls is that they offer different size meals. This gives the chance for the consumer to get what they want in terms of quantity. 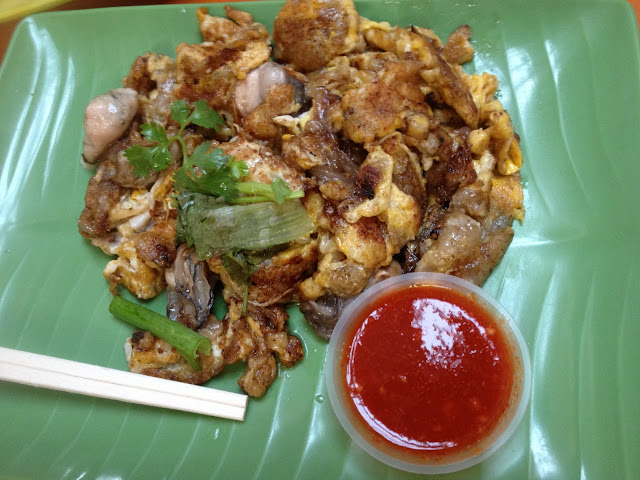 We tried out their oyster cake. I must say though, I like the one I got in BKK more. Although almost the same, the BKK's version in Platinum Food Court (click here) was juicier and more fresh. 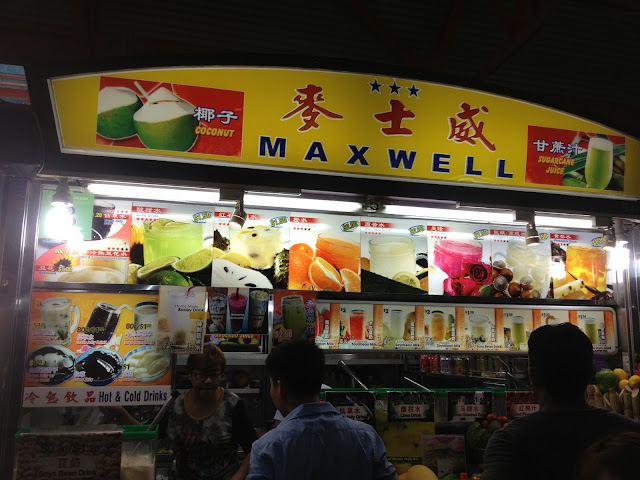 What I also like about hawker places would be that there would usually be a drink stall. Here they would offer different kinds of drink one could imagine. Although I just went for water, my friends tried out different stuff. They loved what they got that they finished them before I was able to take a picture
(that and the chilis were hot hot hot!).

I have to admit eating at an authentic chicken rice place gave me a sense of what Singapore is in terms of its local delicacies. I really enjoyed myself minus the long wait. I also found the prices in hawkers affordable and really cool! Although open air, the place was clean and well kept. 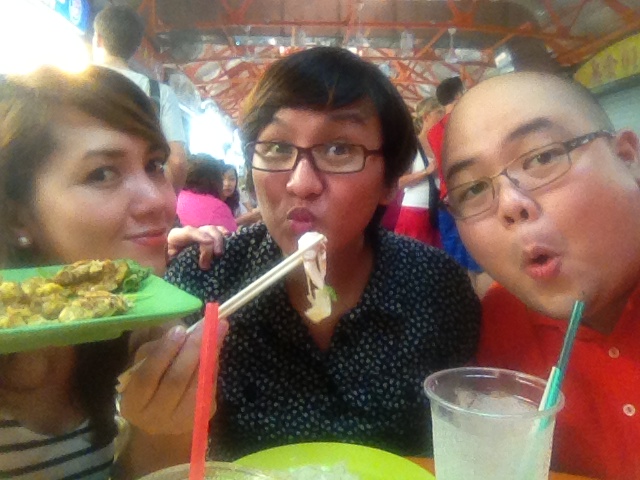 Happy tummy happy us. Now if you think we didn't have dessert, well you are dead wrong! LOL! We had to take an MRT ride all the way to Millenia Walk Mall just to get our fix.
Just wait for my next post :D 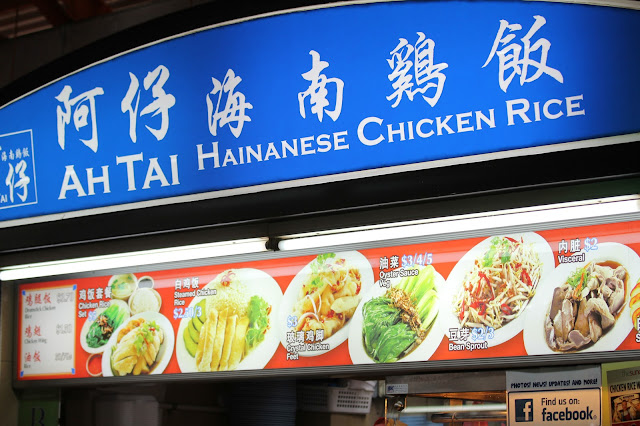 In case you didn't know AH TAI is a similar Chicken Rice Place. The owner of this stall was the head chef of Tian Tian for more than 20 years. He was also a relative of the owner but got into a heated discussion and left Tian Tian. Under his supervision, Bourdain was able to taste the chicken rice and was able to make those comments. You could also try this food stall out since some say this is way better than Tian Tian. During the time we were there, this stall had a queue of around 10-12 customers.
It is only a few stalls away from Tian Tian.

How to go here?
Take a taxi or do what the locals do.
Take the MRT to Chinatown. Use exit A to Pagoda Street.
Walk towards South Bridge and turn right. Walk straight ahead. You would see Maxwell Food centre on your left side after a 5 minute walk. 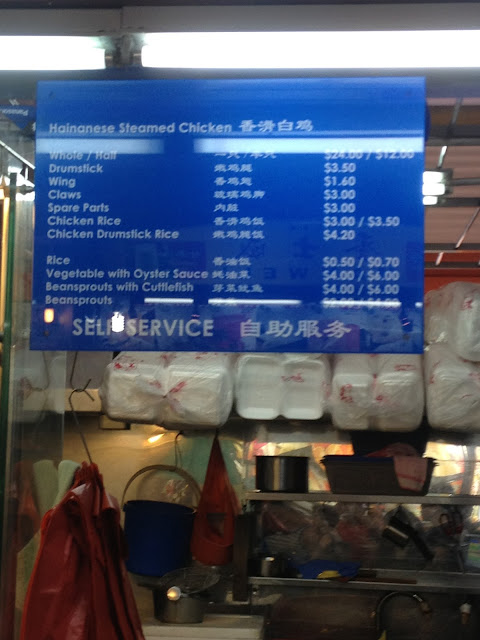