Fall Out Boy: Save Rock and Roll Tour in Manila 2013

"I want to but I can't. I want to! I would love to!  I have classes the following day." These were all the things my brother told me. Even if I could see his face moping. He was really into Fall Out Boy. I knew some of their songs but I wasn't really a hardcore fan. He was. He has all of their albums in his phone. Yes, not just songs but entire albums. I think his prayers were heard.
Thank you presidential proclamation declaring August 9, 2013 as a holiday.
I knew that he needed a break because of the things that were happening in school. He was so stressed. As the big brother, I surprised him and bought tickets. I am a kind brother after all. #kunyarelang 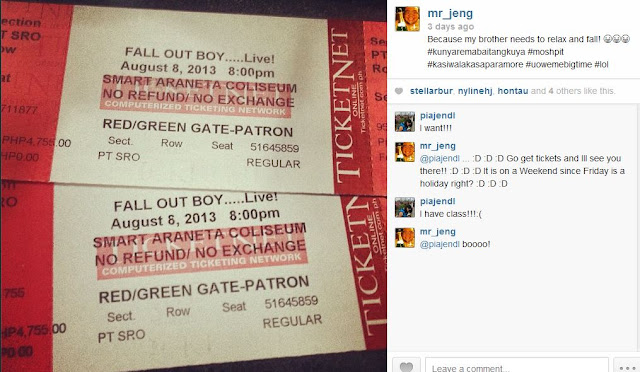 Fall Out Boy has had 3 previous concert here before. The first time they were here last 2007. Back then they had a 2-night concert. Last 2009, they had a one night concert.

Of course a few years ago, my brother was too young to go. So now, he is going!

As we entered the moshpit area, there were already a lot of people. 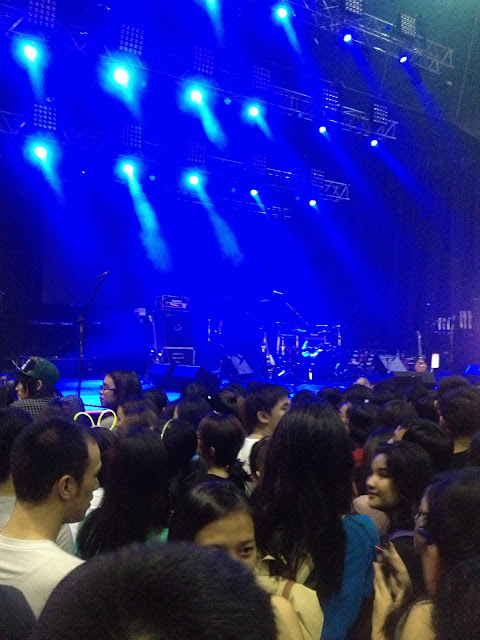 Typecast was the front act. If you aren't aware, they are a very good OPM rock band! 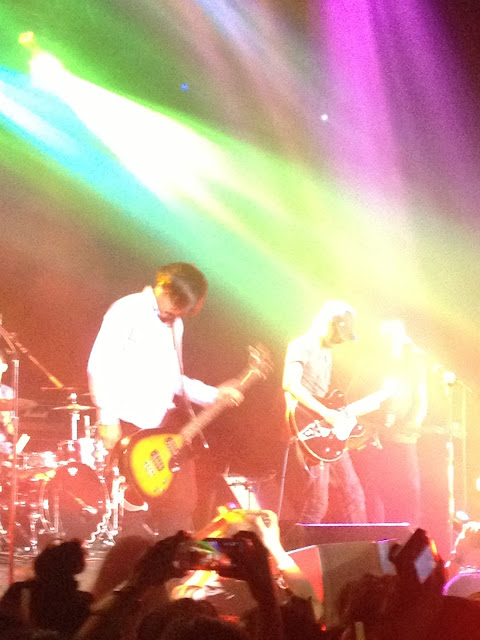 I love their "Will you ever learn"! They started their set at 8 and finished 45 minutes later.

The crew then fixed the stage for the main event. 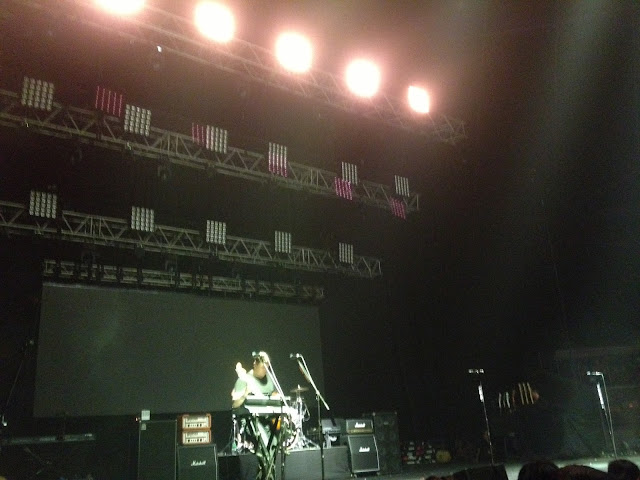 A few minutes after 9, Fall Out Boy went out full swing. 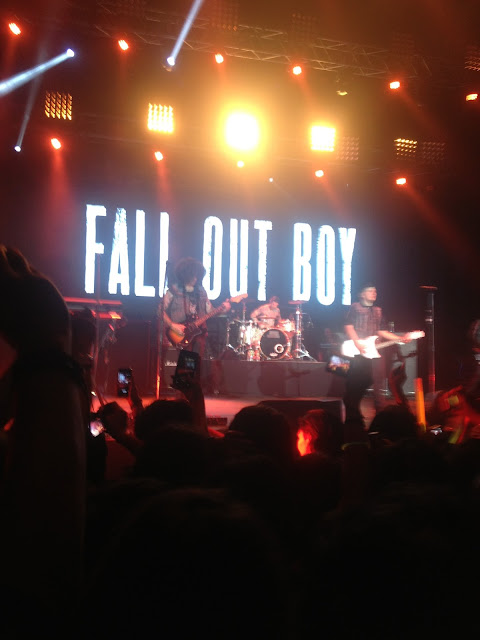 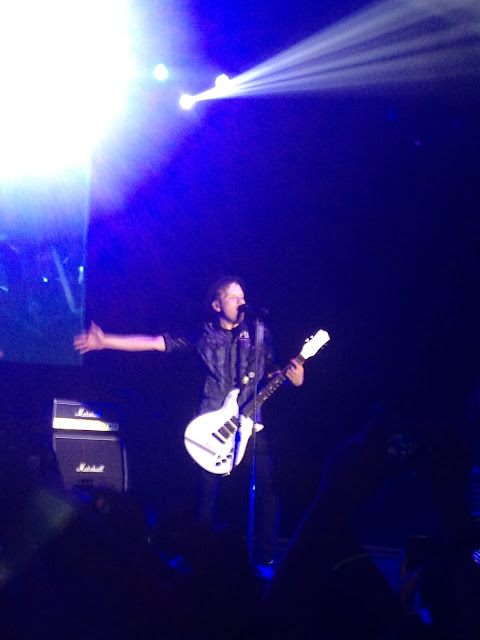 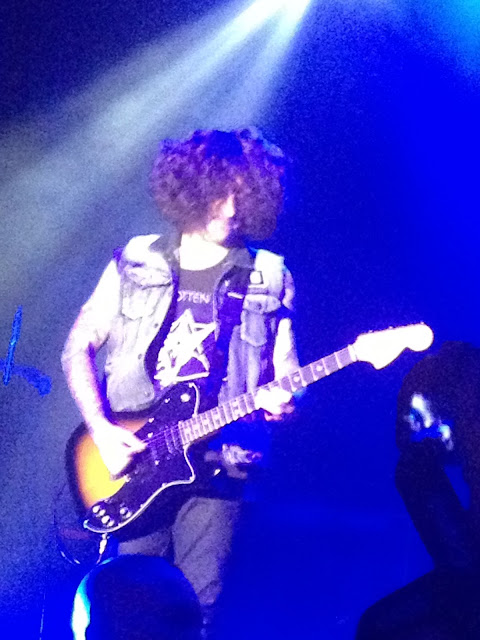 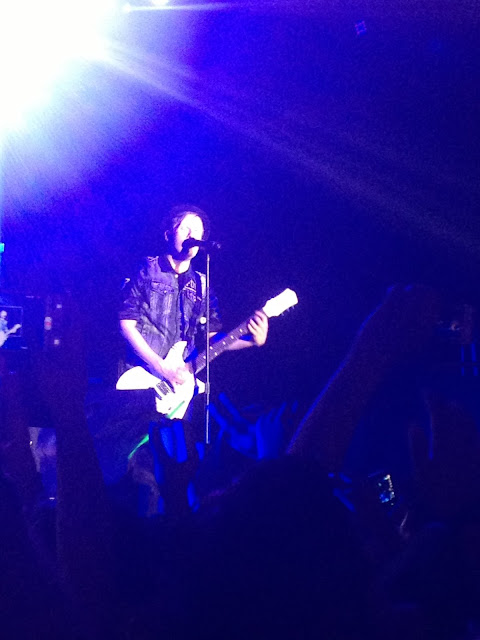 I like it how they are very engaging with their fans. A little story here and a little segway there didn't hurt :D
They even asked us to make a wave! 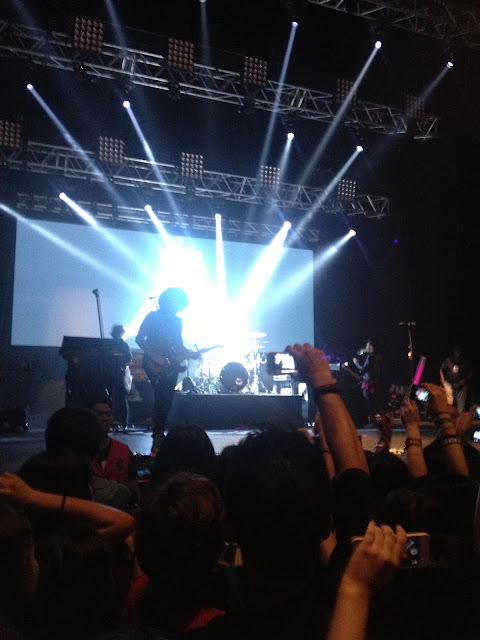 Of course, my brother and I were in the moshpit! 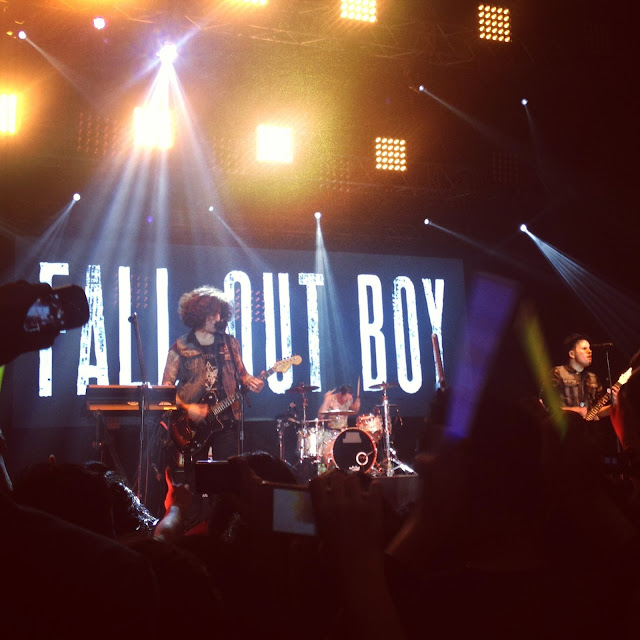 It was oh so hot!Pushing and shoving occurred. It wasn't as intense as the one in Paramore's concert (click) though. Thank goodness! Also, I like to commend Araneta's security. I could see that there are bouncers in the crowd. By my count, around 12-15 person fainted and were carried away by personnel. They would pull them out of the crowd and carry them over the fence. 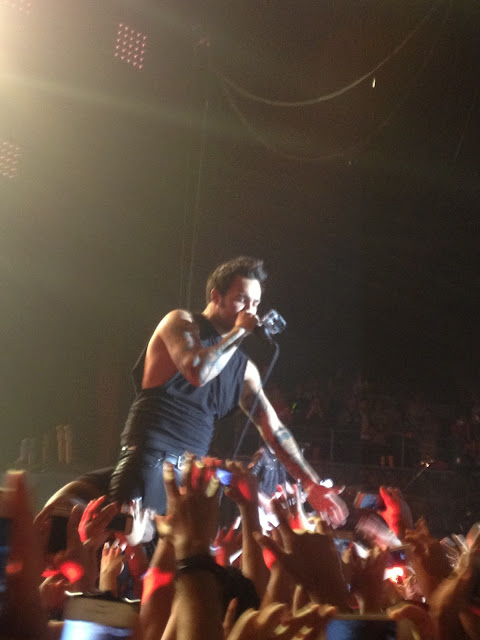 Towards the end, I thought that one band member would actually do a crowd surf!!!! 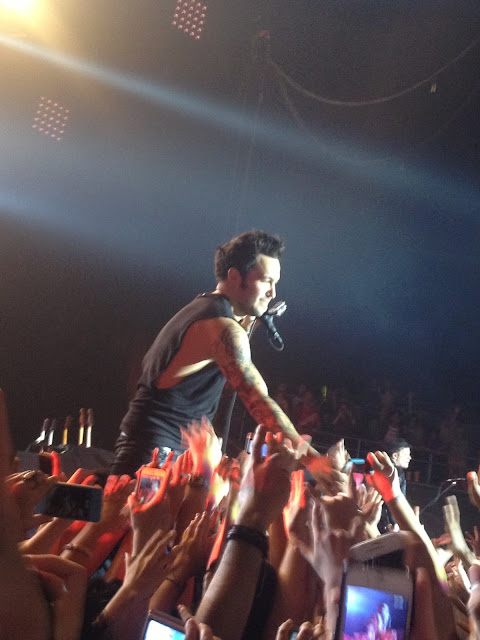 Sadly, he didn't!! LOL! But it was all awesome!

Here is a video. I actually placed 4 vids into one!
These were the songs that I know off so enjoy! Sorry about the quality, I only have a 4s :D LOL!
Heard the fan girl screaming? Great thing I brought my earplugs! LOL! Seriously though, I did use them! :D
Guess what the songs are in the vid? :D :D :D

My brother enjoyed his first ever concert! I think this was my 7th international show :D (Micheal Jackson, Incubus, Red Jumpsuit Apparatus, LMFAO, Maroon 5, Paramore, and a lot of other OPM bands).  He was dead tired. Poor bro. He wasn't really that okay with standing up for around 3 hours. Good thing he was big because he wasn't easily pushed or shoved.
I think FOB's set only lasted around 1 and a half hour. It went by so fast! The energy that the band was pouring out was really felt and it kept us going!

Here are some tips I got from my
moshpit experience.

1) Be ready to get soaked and drenched with sweat. You would be because the body heat of each person and the proximity you are with them is just Argh!
2) If you don't want anyone pushing you from behind or accidentally hitting your back, bring a backpack. You could put your extra shirt and towel in here.
3) Keep hydrated, if possible bring a mineral water.
4) Wear rubber shoes. You will get your shoes dirty because people would step on them.
5) Be tall! If you aren't, wear high shoes or something. People tend to raise their hands and keep it there. They would record or take picture of the celebrities. Also if you are tall, people would avoid your back. Meaning, there wouldn't be excess pushing and shoving from behind.
(Mind you, there was pushing coming from the front too!)
6) Learn how to box out! Yes basketball ! If you know how to, you can easily get yourselves properly positioned!

If you can't stand any of this, I believe it would be better to get a seat. Only problem is you won't get to be up close with your favorite bands.