IHOP: Love it or hate it.

No more lines. No more ridiculous waiting time. No nothing!
That was what my mind was when I went over for breakfast one morning. 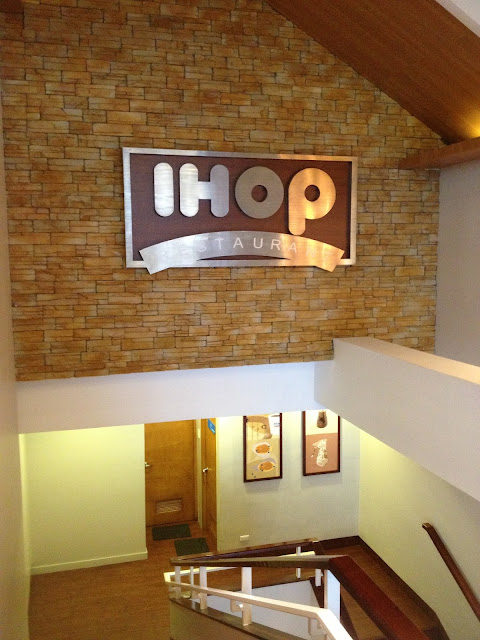 As I entered, the stairs greeted me. I went on over the second floor to find and see the booths. The place could cater to around 120 at most.  The vibe was like any in a morning diner. 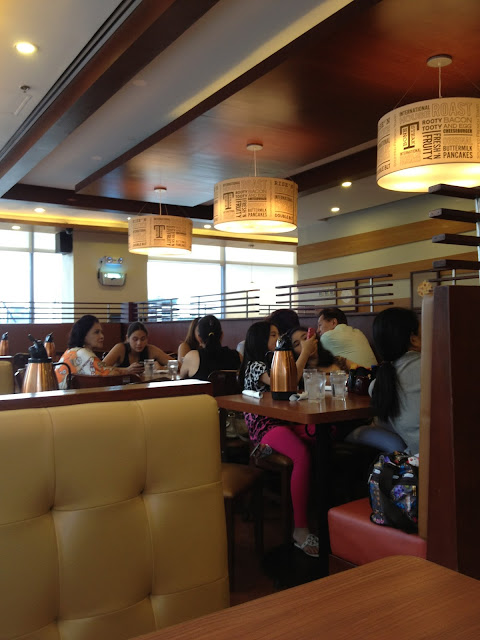 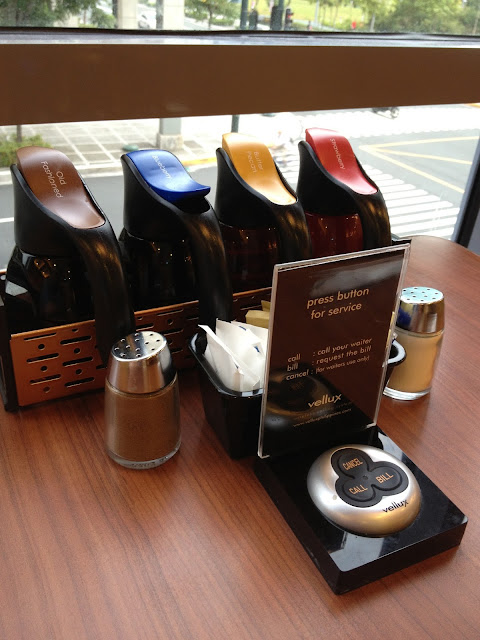 Different syrups were lined up and a handy press button was there to greet me. I guess everyone was pretty busy LOL.
After pressing the button, someone finally catered to my needs. I think and I have the feeling that they were a little rushed. 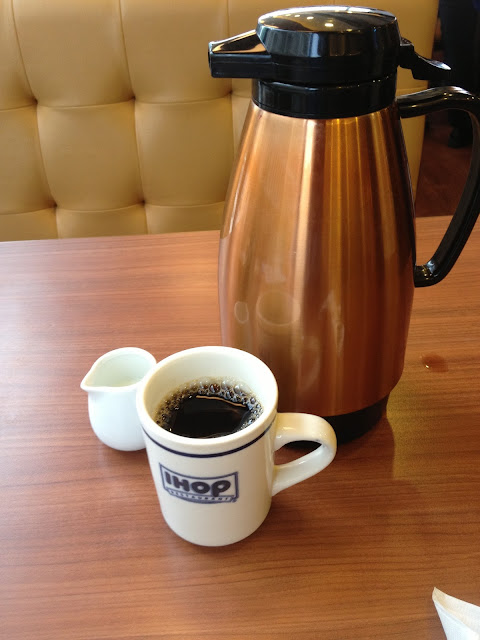 I started off with their coffee (125Php). It was like any other. Starbucks would have been a better choice but this was unlimited.

I also got their hash browns (95 each). Since I love to eat this potatoooey goodness, I got two. 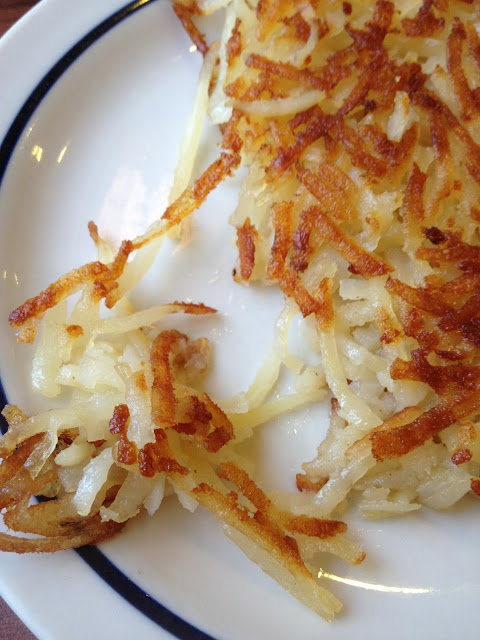 What I liked about it was that it wasn't the normal hash browns we would get from MCDO or the freezer but would rather be individually cut potatoes placed with one another to make a potato patty.

For my main meal, I had their split decision (325Php). It was everything that you would like to have in a breakfast meal. 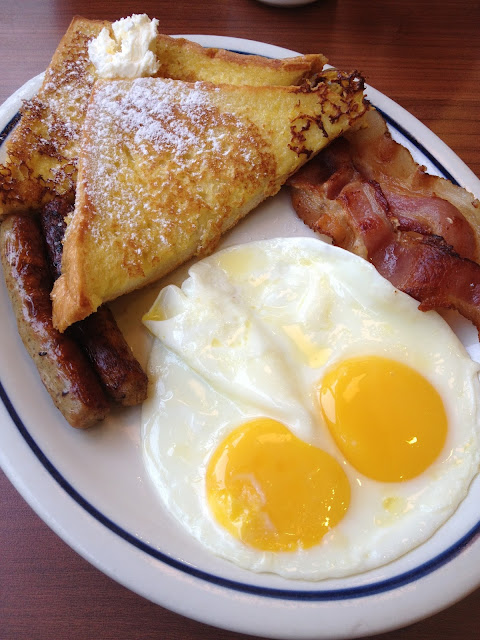 The french toast were normal and tasted like any other toasts. The bacon was on the soggy not crunchy texture. I would have liked it to be crunchy. The eggs were okay (DUH? who could mess up eggs?). The sausages tasted pretty good. A little salty but what the heck. It would have been better though if it was a little bigger. 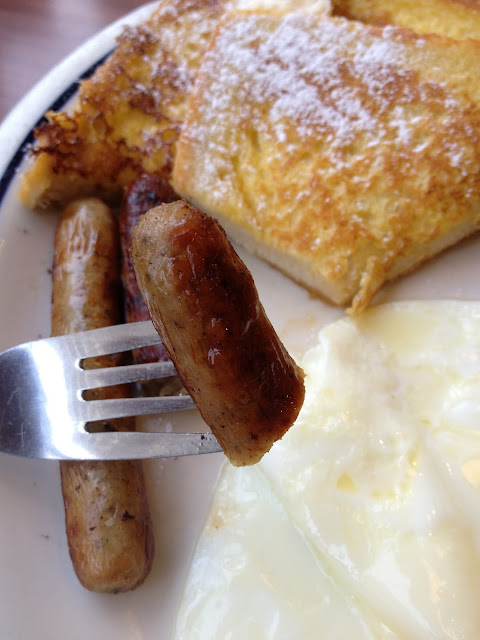 As I was finishing my meal, I remembered that the food I ordered came with some buttermilk pancakes. I had to follow up and remind the server about it. After a minute or two, the pancakes arrived. I noticed that the plate was extremely hot. Maybe this was under the warmer for a long time and it got forgotten? LOL! 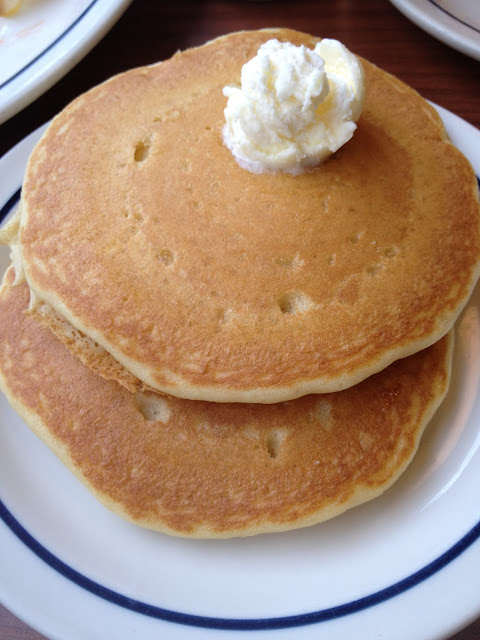 Eating it was a challenge. It tasted like anything from a box. Actually, pre-mix was better. The texture was as if it wasn't that fresh or new. The word I guess was grainy. It was a little dry inside. Of course, this was all a theory so mind you I just don't know if I will be going back for their pancakes. 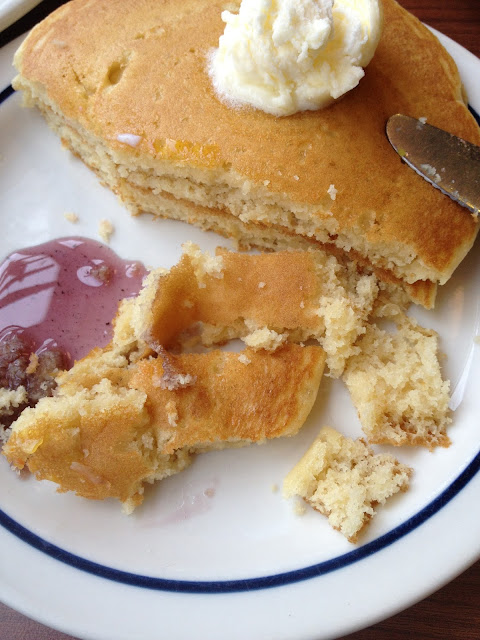 The syrup played a part in making the other wise bland food to something edible. For me, I loved their blueberry and butter pecan. I would also suggest they check out their containers as 2 out of the 4 tops were already unusable and were merely covers.

As I finished up, I pressed up the button for the bill. It took awhile so I got engrossed with something important on my phone. That being said, I didn't notice the bill was placed on the far end of the table. I just don't know but this was the story of the morning. When I asked for something, it would have been forgotten about and I would have to ask a different staff again. From the simple cream to tissue. All through out the breakfast, it was as if the staff were busy bodies. I mean the restaurant wasn't really full. I believe only around 8 tables were being occupied. Once they are able to get something I need, they simply place it on the far end of the table rushing off without stopping. No questions about the meal or checking up on how the food was or if I needed anything else. I had to repress the button again because the staff was already on the far side of the floor. Yes that fast. The term I guess would be "AGAD AGAD". They were doing speedy gonzales moves. It seems that they were haggard.
No smiles just flat affect.
I didn't like the feeling and experience because it was something that was being rubbed off towards the customers. Rather than having a nice relaxing early morning meal, it was as if I needed to go and quick. Quite different for the Filipino dinners. I just let it slide. Maybe it was just me but usually it would be different in other restaurants. Ow well. How I miss Breakfast at Antonio's (click) :D

Anyway, I am not really sure if I would be going back. Maybe after a few months or so. Definitely no longer for the pancakes. I did liked their hash browns though. Budget around 500Php per person.

Quick tip: Do Not park in front of IHOP. Some of the patrons did, thinking that it was early in the morning and their vehicles won't be towed. Well there, some of them did got towed. LOL! There is an open space parking lot that is only 2 minutes away. Remember when in BGC, they are really strict when it comes to parking! LOL! 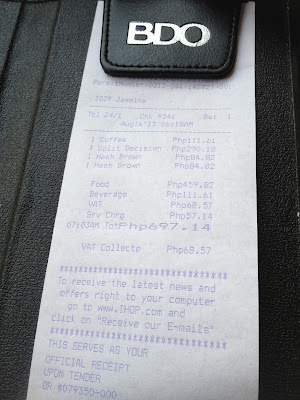 Disclaimer: I paid for my meals. No one asked me to write about my experience. No compensation happened.