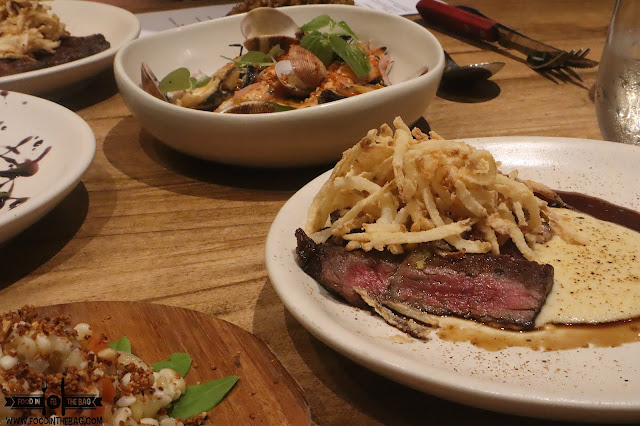 For a few weeks now, I have been hearing about this place in Quezon City that offered Filipino dishes elevated through proper cooking techniques. Something pretty good that is worth a try. Thankfully one Thursday night, I found myself with friends in this new restaurant.  HAPAG MANILA is a quaint fine dining restaurant that offers an 8 course tasting menu with ala carte choices as well. 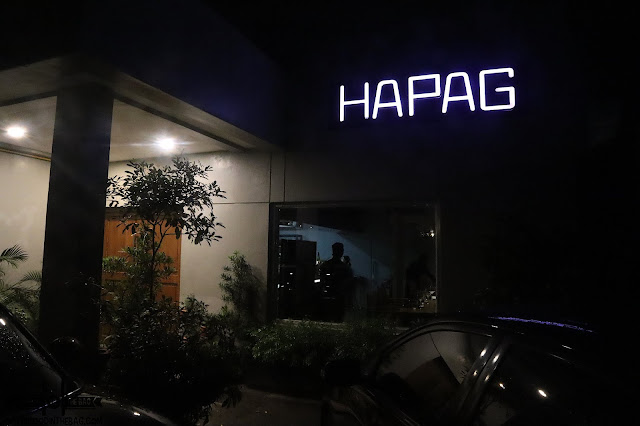 Finding the place was a journey in itself. It's actually located in a small compound that used to house WHAM BURGER on the south bound of Katipunan. Just infront of Blue Ridge, parking could also be a problem since the lot can only fit a handful of vehicles. Other than that, it seems like a good date place for couples or even a small get together between foodie friends. 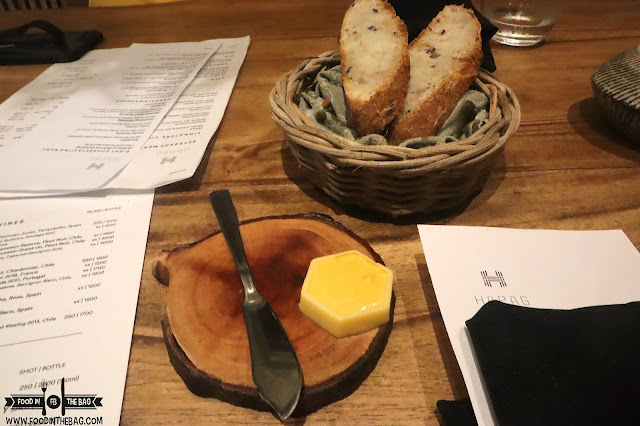 HAPAG MANILA tries to be something above the norm. Utilizing Filipino ingredients is one of the things that they champion. Dishes are served and explained as they are placed infront of you.  The server or one of the chefs greets everyone and advises what the dishes are and of their components. They also explain how to eat certain dishes. 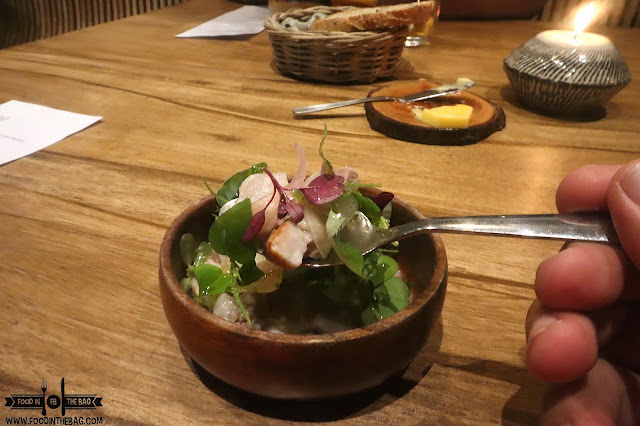 An amuse bouche of a sisig-like bite-sized dish was the signal to the start of the 8 course tasting menu. The filling was quite similar to dinakdakan. An Ilocano dish that is tangy and would wake up your senses. The real first dish though, would be the SINUGLAW. Grilled pork together with market fish is served in a vinegar concoction that also have some pickled vegetables. Quite comparable to ceviche, you could say that this one is a Filipino version. 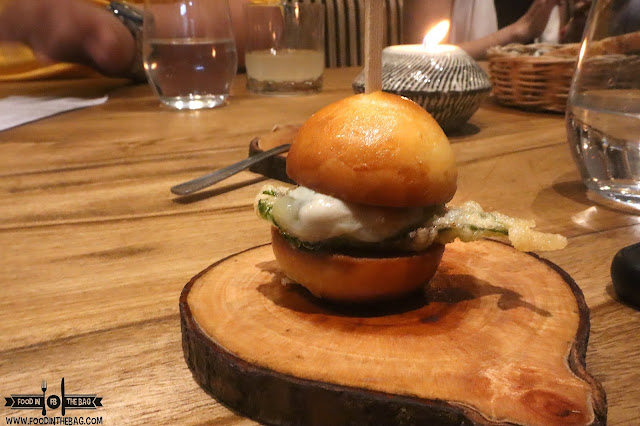 I was pleasantly surprised with the OYSTER BONETE. As soon as I placed the entire dish in my mouth, an explosion of flavors happened. A plump Aklan oyster is partnered with adobo aioli. This went really well with the buttery bonete bun. I could have easily devoured 4-5 of these babies. Then came this huge bowl filled with green leafy vegetables that is similar to herbs. As the server explained, there are LAING STONES inside. She drowns the bowl with a mango-based spritzer for added flavor.  Although honestly, I didn't taste it. The stones, on the other hand, were deep-fried and delicious. 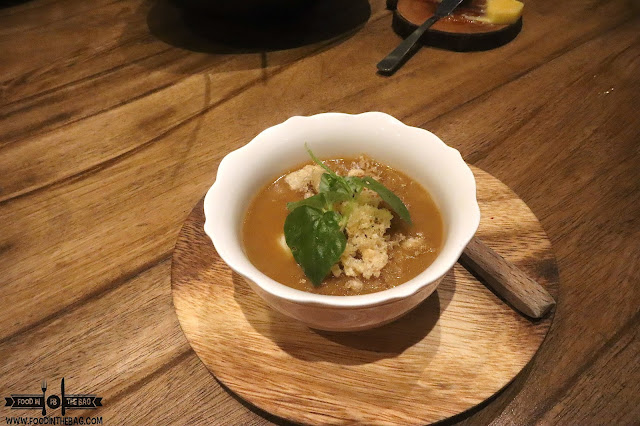 A favorite among guests, the GINATAANG ALIMASAG is a creamy hot mess that would make you want to lick the entire bowl. Granted that you won't really do that, this dish is made of coconut squash, custard, crabmeat, and prawn head sauce. It is heavy and finger-licking good. 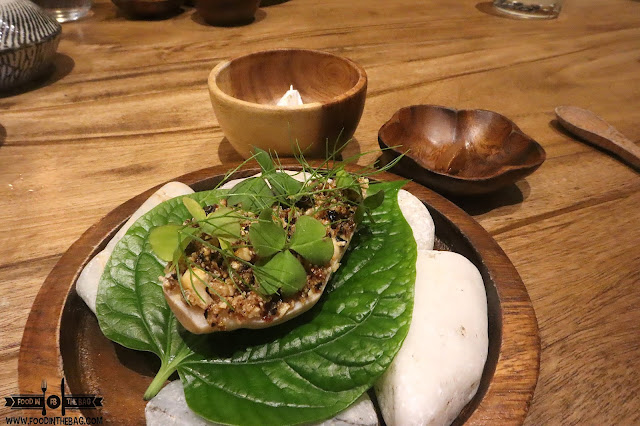 To prepare for the main dish, the flavor profile seemed to tone down after the alimasag. The BANANA HEART GRANOLA was well-presented. Unfortunately, I find the flavor-lacking. Texture-wise it was great but it was a bit bland. I'm on the fence on this one. Although having a vegetarian "bagoong" seemed interesting, I think they still needed to tweak this. 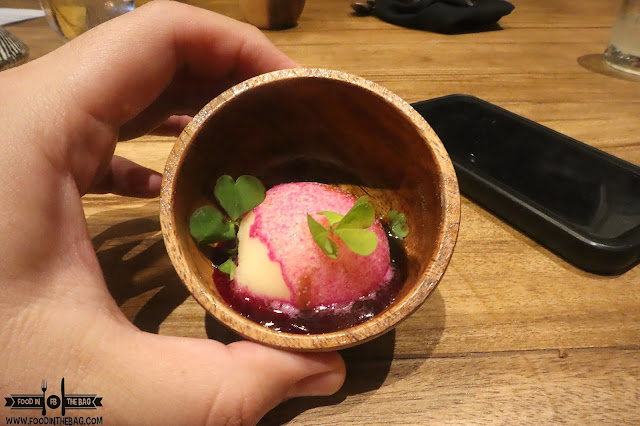 To clean everything up, a SORBETES was served. This calamansi sorbet forced my mouth-feel back to zero. It cleansed everything. It was strong yet wonderful. 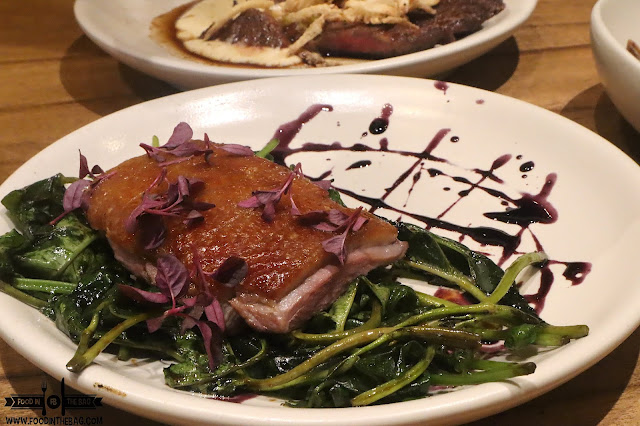 One thing that makes HAPAG MANILA different from other places is that they offer a main dish as part of the tasting menu. You are able to pick from a number of choices. In my opinion, it was a hit or a miss. Although not part of their tasting menu, we decided to order the duck dish as it came highly recommended. I was not disappointed as it was cooked perfectly. The meat was tender and the skin spot on. 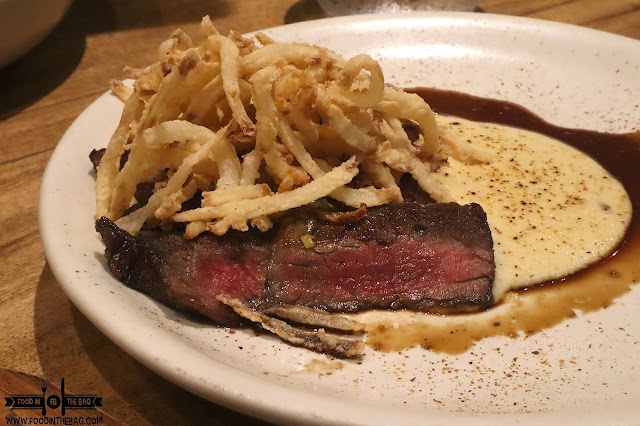 The BISTEK TAGALOG wanted to convey a Filipino dish that is commonly citrusy and salty. Even if the Rib Eye Steak was cooked perfectly, we couldn't connect it to being it's namesake. It lacked the  flavors that you could get from a Bistek Tagalog. It seems as if its rice partner made up for it. I think if it was named differently, I would probably enjoy it even more. Choosing the APAHAP MAYONESA was a gamble. It was described as a pan seared local sea bass, malunggay and calamansi mayonesa, beetroot mayonesa, squid ink rice, and dulong-okoy. Visually stunning, I can't really describe how disappointed I was. Don't get me wrong, the fish was good and the okoy was presented uniquely. Unfortunately, the squid ink rice was too sweet. I don't know if that is what they are aiming. Dessert was a choice between a coconut based ice cream and mangoes with rice cake. 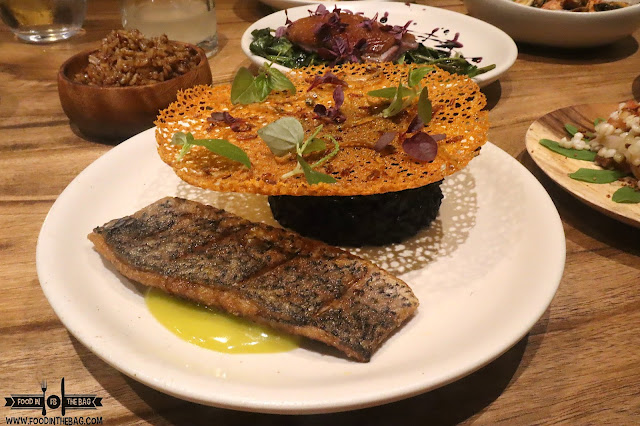 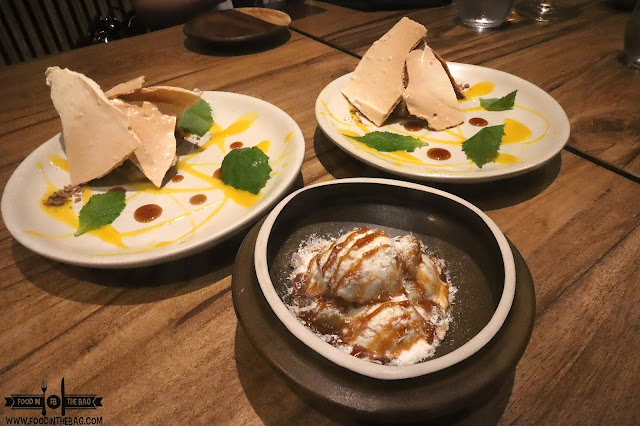 HAPAG MANILA has a long way to go. BUT,  it's definitely going in the right direction. I can't stop praising their appetizers as they really went above and beyond. The mains were a hit and a miss. Probably starting high, the meal ended somewhat just okay. If I do return, I would probably just go with ala carte so that I could pick what I really want. If this is a sign of what's to come in the Filipino food dining scene, I can't wait for the future.

As they only open during dinner service, I guess it's best to make a reservation for an early time slot. Aside from having decent parking, you are able to let rush hour pass you by. Since most of the dishes have seafood, don't forget to let them know if you are allergic during your reservation. According to the chef, they can substitute some before hand if you're planning to have the eight course tasting menu.


Disclaimer: Wrote this based on my experience. Paid for the meal.
Informed the chef of our experience. I wish them luck and all the best.
Tagged