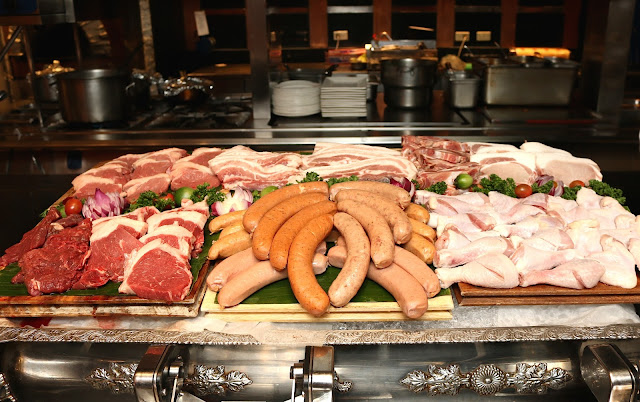 One thing I hate about buffets is that they always serve the same old thing over and over again. If I'm a foodie, I won't enjoy something without variety. It is important for restaurants to serve a variety of dishes to allow its visitors to enjoy as much as they can. I think MAKATI SHANGRI-LA is working towards fixing that problem. 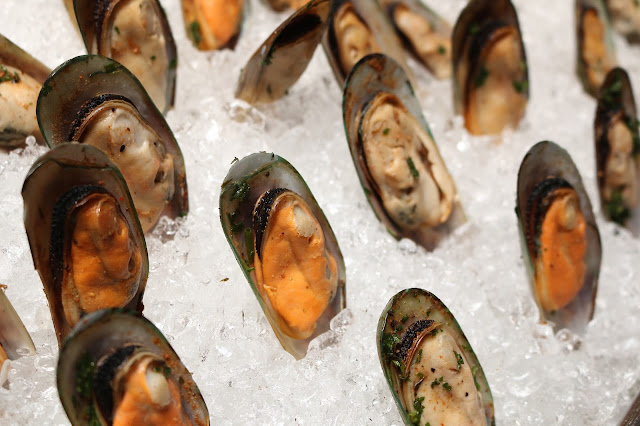 One of the most important aspect of eating is enjoying it. MAKATI SHANGRI-LA's CIRCLES has been at the forefront of this battle. Rather than serving the same old food over and over again, they made something  different. A themed dinner buffet everyday of the week. What started just this September, they hope to push the run till the end of the year. To give their dinners something to look forward to every single night. 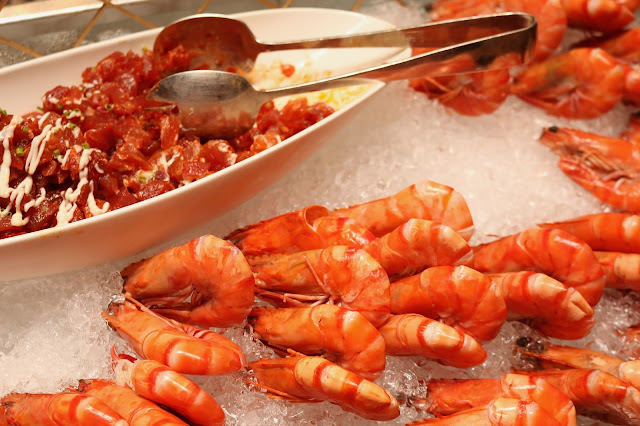 I've been to MAKATI SHANGRI-LA's CIRCLES a number of times already. Almost if not always with the family. I tend to look for something drool worthy every time I visit the place. Thankfully, I went on a TUESDAY night this time around for their "BUTCHER'S MARKET". From the word itself, you would be glad to know that CIRCLES buffet spread would be focusing on ALL MEAT entrees. They will of course still serve different parts of a meal, its just that MEAT would be their focus for the night.

Aside from the mini-seafood bar serving oysters, shrimps and clams, they have a long table housing different appetizers, salads, and starters to begin the night. 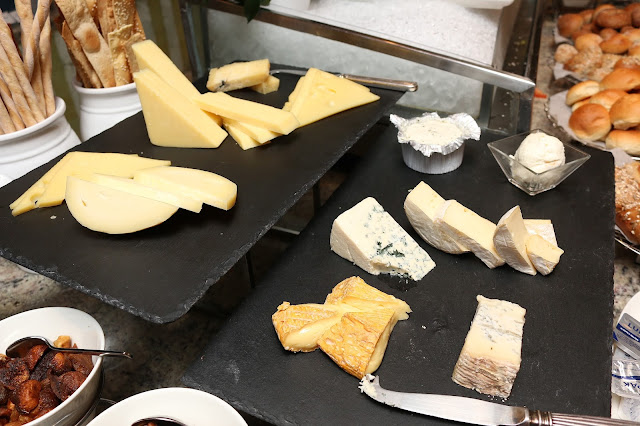 Different cheeses to enjoy, along with a plethora of bread. Of course, they have different dips as well. 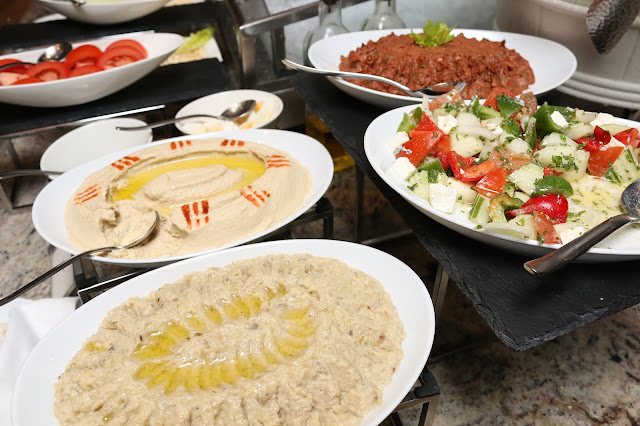 You know me, I started with some Japanese dishes like sushi and other rolls to fill my tummy. 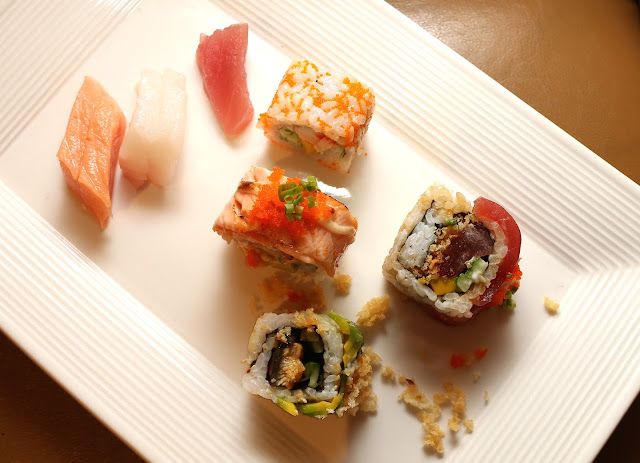 According to the chef manning the Japanese Station, their best seller would be these blow torched salmon covered rolls. I got to agree with him as it's pretty much one of my faves. 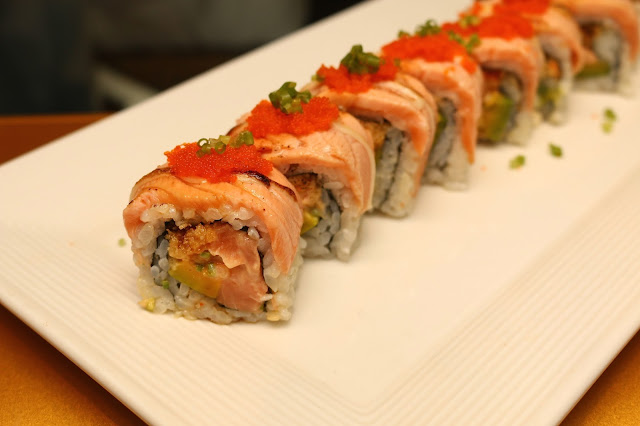 At the other end of the long buffet line, they had the dimsum area. Here you could also ask for noodles to be cooked for you along with what ever toppings your tummy desire. 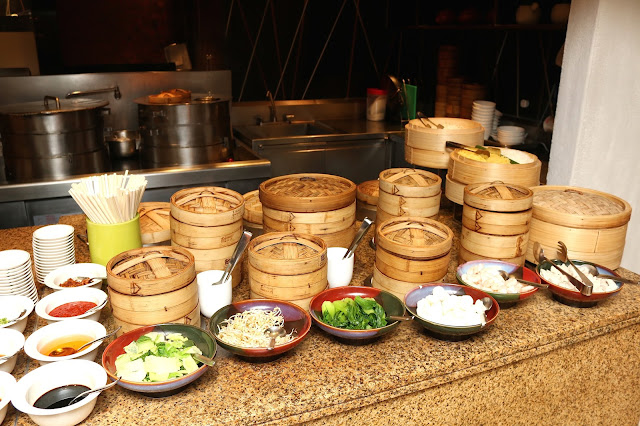 Not just Chinese based noodles but also other pasta dishes that you have the cravings for.
Like this puttanesca. Straight forward. No frills. 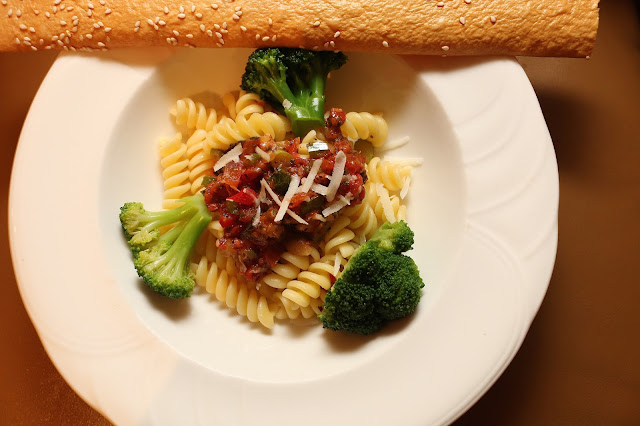 Alongside it is their Indian station. This is where they serve their tandooris and other spice filled dishes. 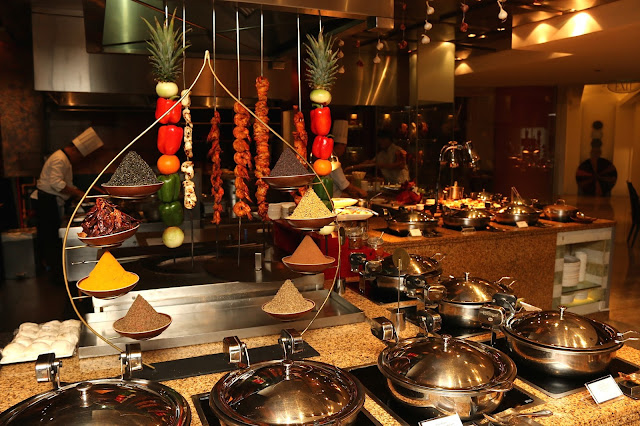 It didn't stop there. THE MEAT SECTION STARTED WITH THIS AMAZING FILIPINO DISH. They had a ROASTED PIG or Lechon which I must say got wiped out pretty fast.  The skin was crunchy and glorious. Each bite would equate to a delicious sound. Don't worry though, they also offered other roasted dishes such as chicken, duck, and yes out of no where deep fried tempuras. 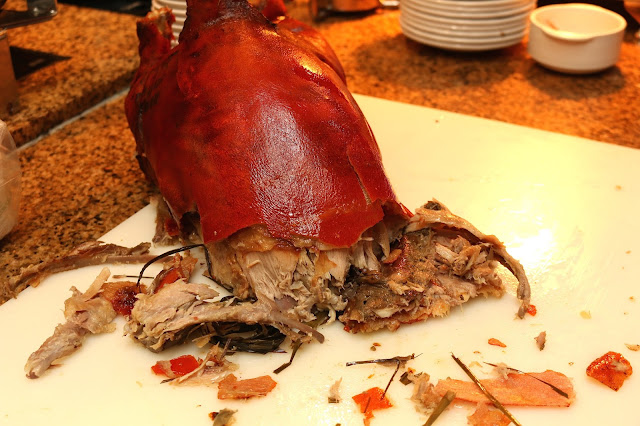 Then this huge table of meat greets you. You can see the sous chef getting those huge chunk of steak right there for grilling. You could ask the staff to cook those pork chops, different kinds of steak,  chicken and even sausages that would make you order beer just for Oktoberfest. Perfect beer match I tell you. 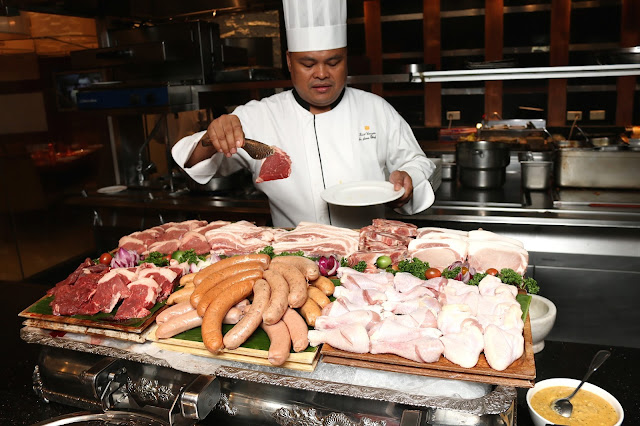 These aren't just ordinary steak, they are marinated to perfection. Cooked just right and are heavenly with each bite. Yes, I moved the veggies to the side and just had the steak. 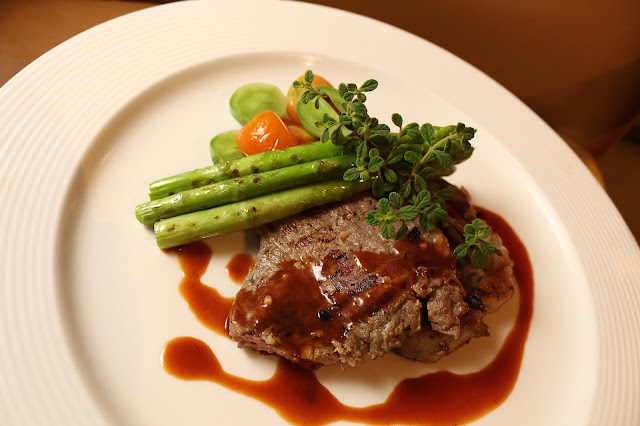 Oops, that's not all. They also had a humongous PRIME RIB. This bloody piece of meat has a coat like no other. Herbs upon herbs were used to make it flavorful. Plainly speaking, it was damn perfect. 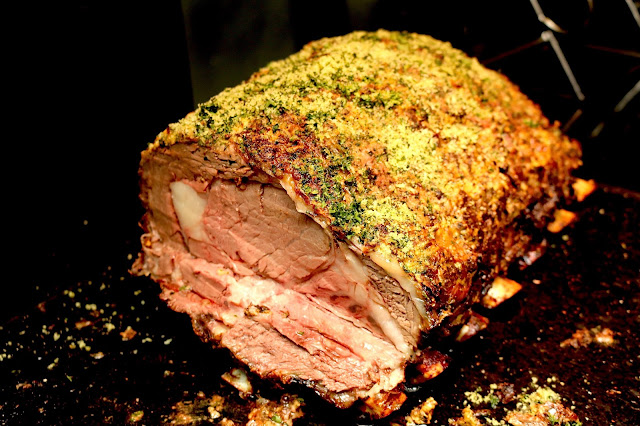 They also had a bunch of hot dishes for you to take the plunge with. 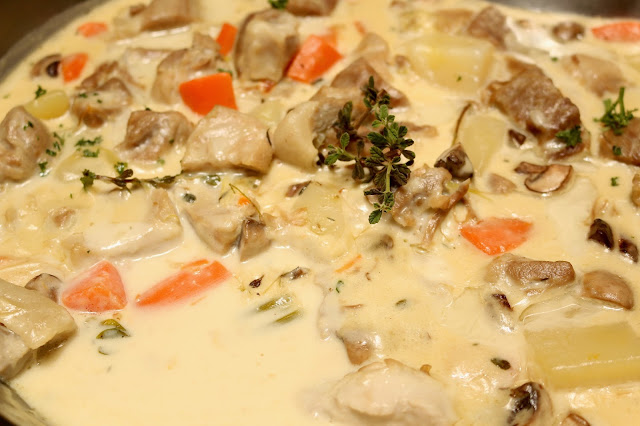 Mushroom and ox tongue to Pork Belly cooked in a tomato based sauce. 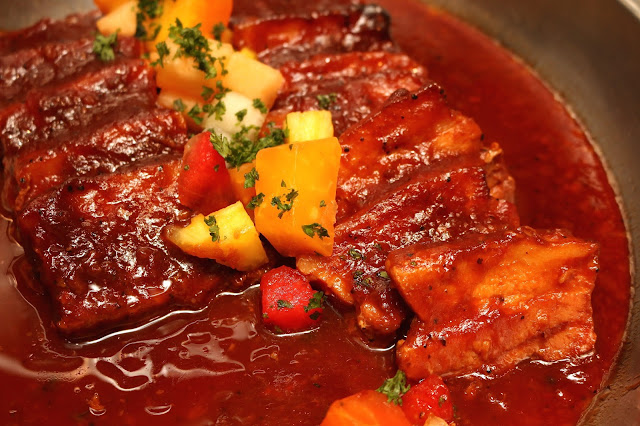 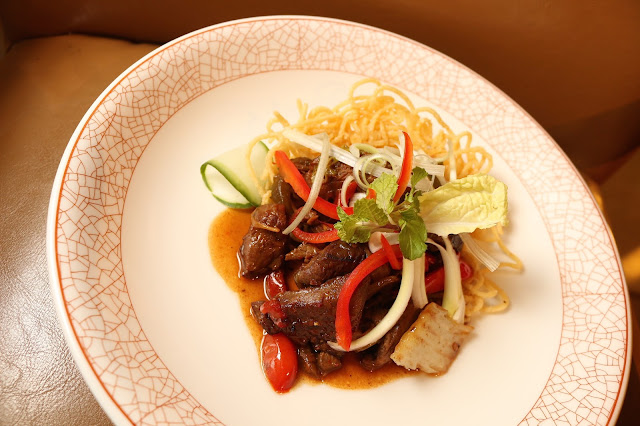 A lasagna like dish covered with incredible cheese and has a meaty surprise inside. 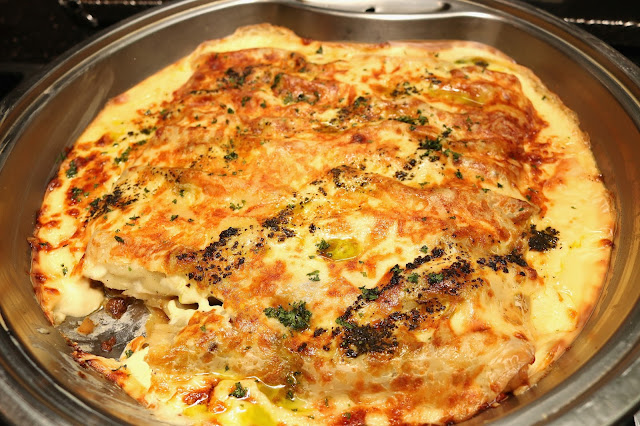 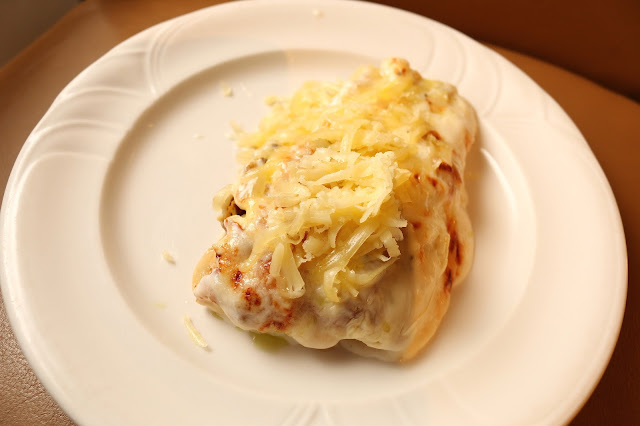 Another beef dish. Apparently, you can't have too much of meat as they kept on pouring the different dishes. 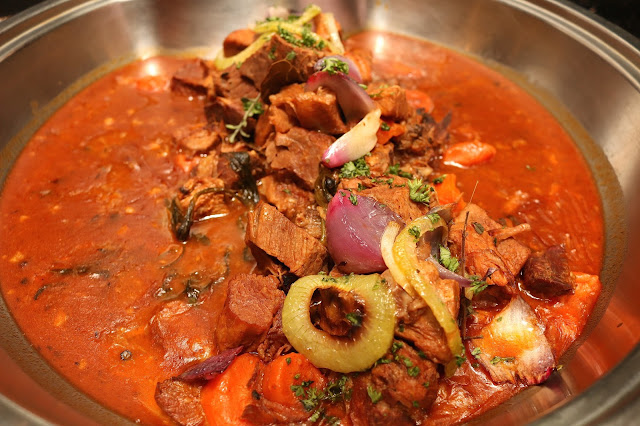 Truth be told, a meal isn't complete without dessert. It is the main reason of finishing a meal. To get to a sweet ending. 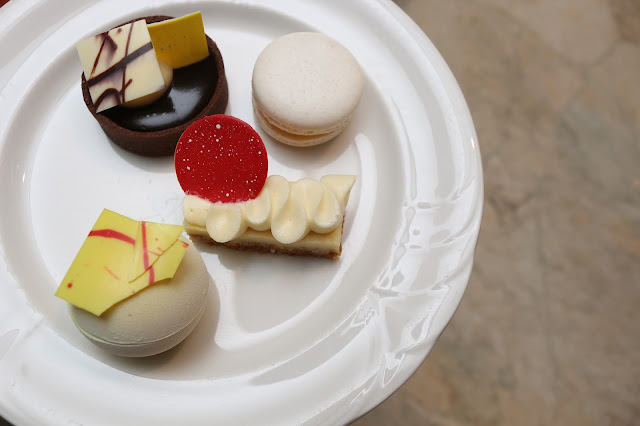 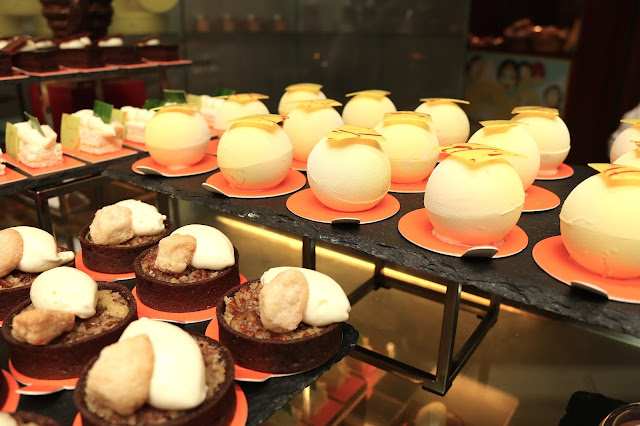 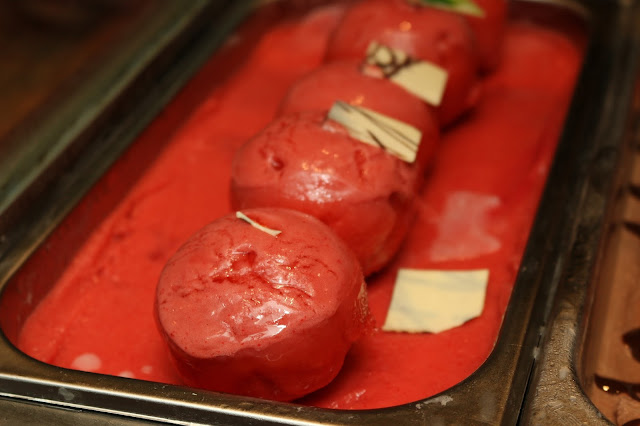 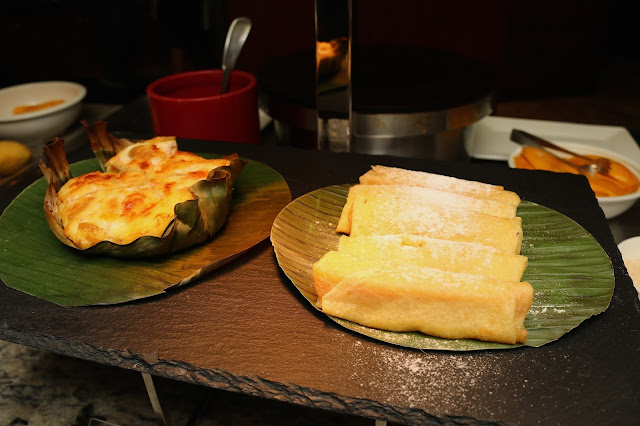 They even had a huge cupcake for the taking. 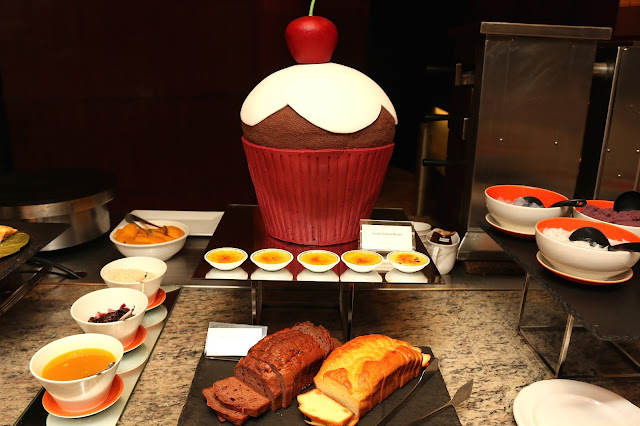 Seriously though, they had an awesome TIRAMISU 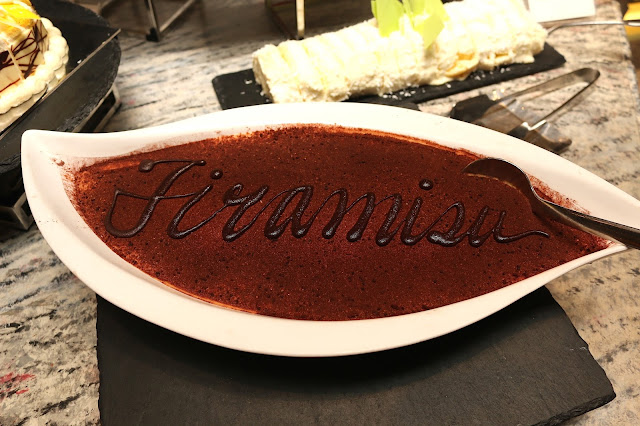 and this devilish EVIL CAKE. You must not miss this one. DEADLY yet uberly good. 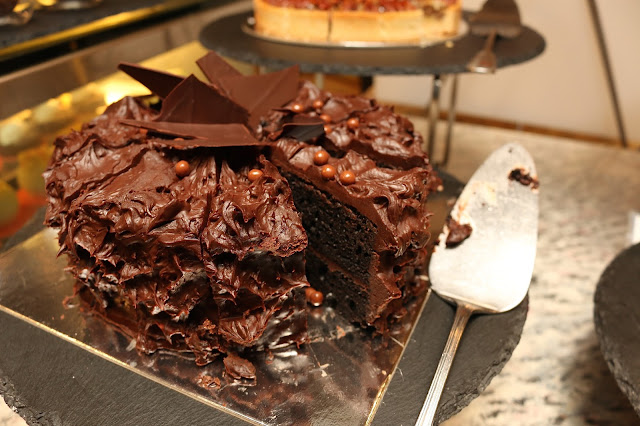 
I know that CIRCLES has been there since forever. With this new set up,  MAKATI SHANGRI-LA could be able to keep inviting foodies over and over again just because they have something different every dinner time for a whole week. I know for a fact that I would definitely enjoy the SEAFOOD MARKET and maybe another round of BUTCHER'S and to sum up everything, the GRAND CENTRAL MARKET. 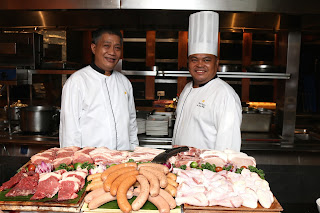 Disclaimer: Was invited to try out the new lineup of Makati Shangrila's Circle
#ComefullCircle
Wrote this based on my experience.
Thank you very much Aencille and Patty for having us. I enjoyed the chats as well.
Tagged